How to Reach and Defeat Grand Magus 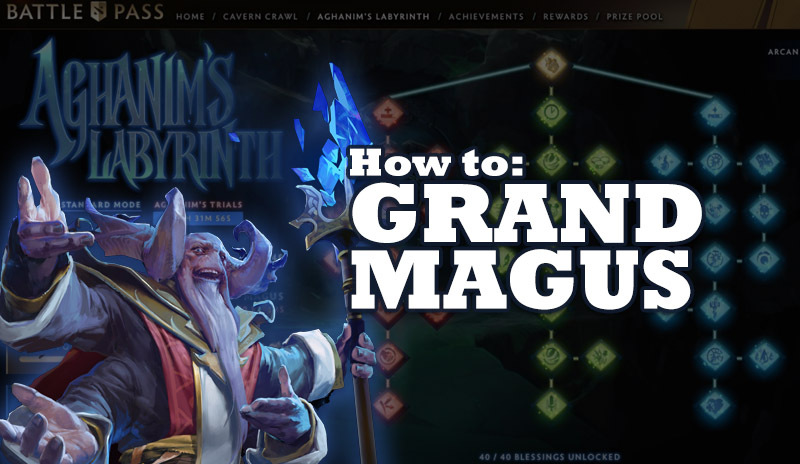 Learn how to defeat the highest difficulty in Aghanim’s Labyrinth

You might have passed Apprentice and Magician, and possibly ridden on the coattails of randoms or razzle-dazzled to pass Sorcerer, but defeating the Grand Magus difficulty is a beast in itself. If you’re looking to get your hands on the “BOCK BOCK BOCK! That is what you sound like!” voiceline for completing Grand Magus, along with the clout that comes with it, then this guide is for you.

I know what you’re thinking, if you have some spare cash early on and you’ve got 0 lives left, why not do a bit of business with good old Bristleback and spend 1000 gold? Well according to Dota 2 content creator and Labyrinth addict Jake “SirActionSlacks” Kanner it would be incredibly foolish if you want to crack Grand Magus.

“Do not buy lives or potions unless you’re maxed out. Do not do it… until the very end” said SirActionSlacks. “If you buy a life and die you lose 1000 gold, if you die with zero lives and your team beats the room without you. That’s efficient.”

On completing a room, allies that died with zero lives automatically respawn, and this is a perk you should capitalize on. Instead of buying a life you can earn it, which is much more cost-effective than wasting gold early on. Heading into a room with zero lives is not the end of the world. Come late game support(s) out of the fray should hopefully have three lives, and they can spend their surplus cash buying extra lives for their team-mates. 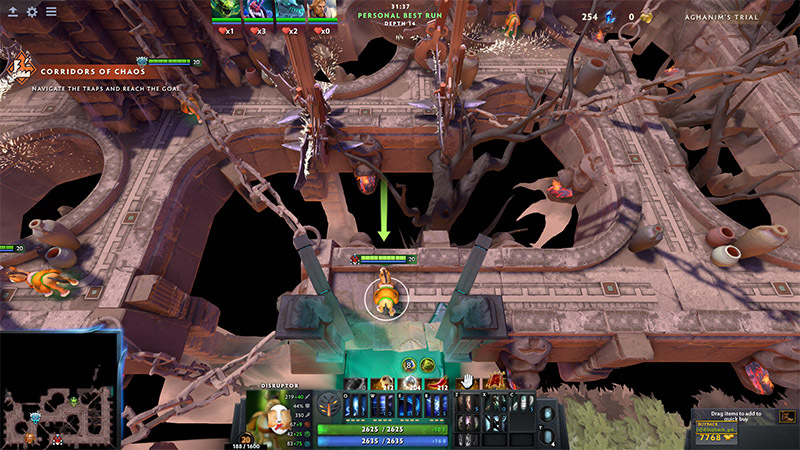 Do not Underestimate Room Modifiers

After you complete the Apprentice level difficulty, the next levels introduce modifiers to each room you attempt. What you may not know, is the chance of you facing “deeper” more complicated rooms in the labyrinth early on increases as well.

Room Modifiers based on Difficulty:

By the time you’re on Grand Magus difficulty, every Basic room will have three room modifiers. There are a total of 21 Room Modifiers, some more dangerous than others. A common mistake for players who finished the labyrinth at least once, is that they believe they know “the trick” to defeat each of the rooms. For example ensuring the Temple Guardians lose hit points at roughly the same rate to avoid their ultimate, or killing the Golems to weaken the Warlocks. However, with Modifiers a weakness you’ve previously preyed on may no longer be applicable. To view the room modifiers and their effects, you can hover over the gateway before picking your Room. 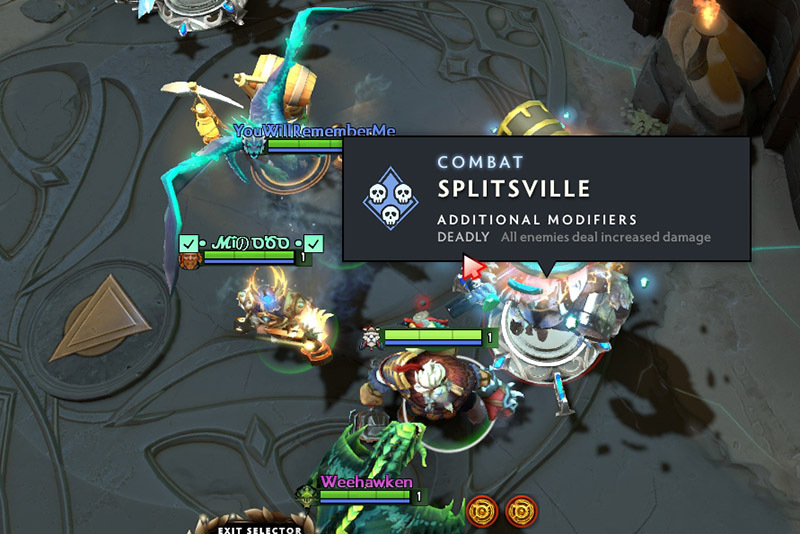 Pay attention to Room Modifiers, some are more Deadly than others

“Take your time before each room and consider the  choices,” suggests Lewbot, a seasoned Labyrinth runner. “What enemy will you be facing? what modifiers will they have and how does that interact with both that enemy and how your lineup can deal with it? It might be boring, but that extra 30s to think about what you’re doing next rather than just blindly clicking cause you need hearts/gold can be the difference between clearing a run and getting wiped.”

Overall at Grand Magus level, the chance of at least one game changing modifier on a room is high. The deadliest modifiers introduce an element of unpredictability, causing you to waste spells or incorrectly think you can make a clutch escape.

Six deadly Room Modifiers to watch out closely for: 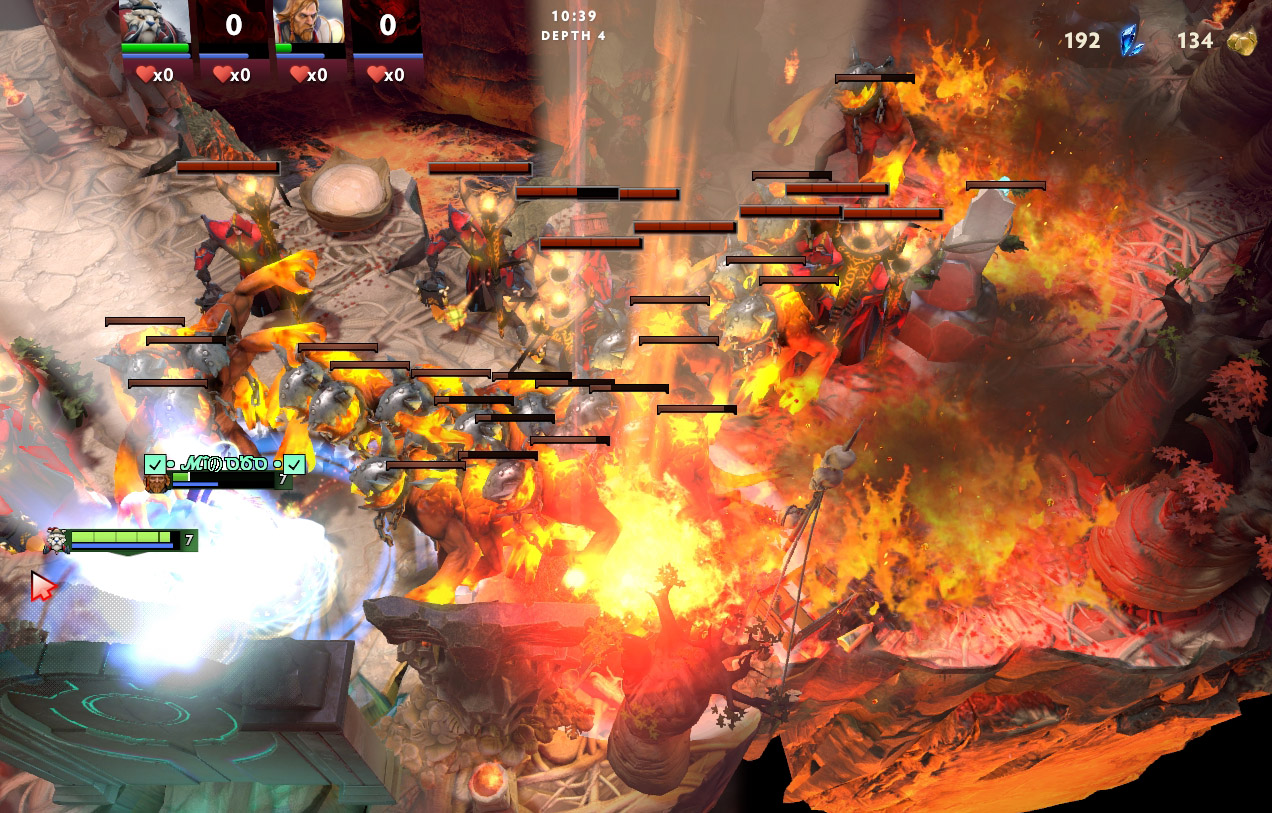 With the Depth Modifier forcing Magician, Sorcerer and Grand Magus parties to face tougher opposition early on, it’s crucial you grind out good loot. Do not opt for safe common rooms, even over Trap Rooms.

Trap Rooms while they can be deadly, only require one of your allies to complete. What is more after a Valve patch Trap Rooms now offer not only Elite Shards, but also multiple chests which can contain items, gold or even additional lives. You get one guaranteed chest on completing the room, and two spawn along your path to the finish line.

A useful tip for the Trap Rooms is that even though you’re a donkey, your neutral item slot is not muted. Therefore, if you happen to have Precious Egg (33% chance to survive on one health) or Phoenix Ash (lethal damage prevented and hp restored to 50%), equip them.

Word of warning, try to avoid the two Trap Rooms called Corridors of Chaos and Splitting Hairs in Depths 15 to 17. They are incredibly treacherous and will cost you heavy casualties on the eve of facing Aghanim. To avoid deaths in Trap Rooms, use pings to show team-mates safe spots you found, allowing them to break down the run into smaller pieces. 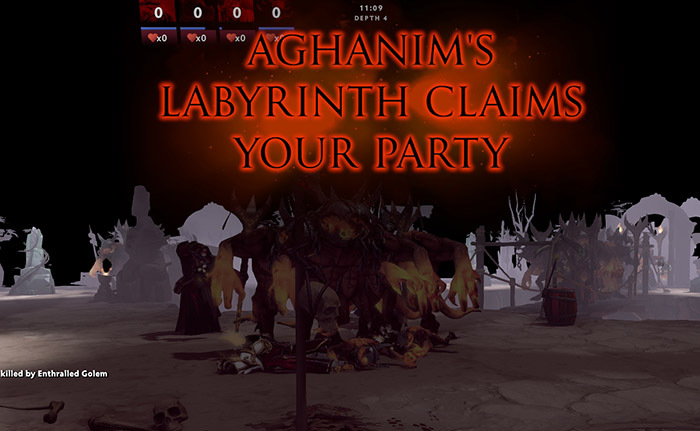 Don’t rush, this is not a time trial. Take it slow and stick together

Elite Rooms are high risk high reward, and you will need high rewards if you want to reach and beat Grand Magus. Do bear in mind what we mentioned earlier about modifiers, but assuming they don’t have one of our six deadliest modifiers, pick Elite Rooms early. Your reward will be Elite Shards, which are twice as powerful as Common Shards, on top of a chest. Indeed, Elite Rooms might seem daunting, but actually in some cases can be pulled off by one or two heroes alone. All you need is patience.

“Don’t rush things. You don’t need to run the full DPS lineup seen in the Aghs Trial leaderboards. You can take your time and take rooms slowly for the most part,” said RallyingCry, whose team finished top 25 in the Trials.  “Don’t take elite rooms later on if you aren’t 100% sure you can make it. The Elite rewards are nice but ultimately unnecessary and they can easily end your run.”

One important tip to surviving Elite Rooms is to memorise not just the enemy and its modifiers, but also the room itself. Many minions or monsters only attack when aggro-ed, so if you can keep your blood-thirsty Weaver on a leash, you can take them on, one by one.

“Learn how to kite in each room differently, some rooms have dead ends, some have bottlenecks that can be deadly if trapped in the bottleneck facing certain AOE enemy attacks,” said Lewbot. “Going clockwise/counter clockwise is a generally good rule of thumb but by no means the law.” 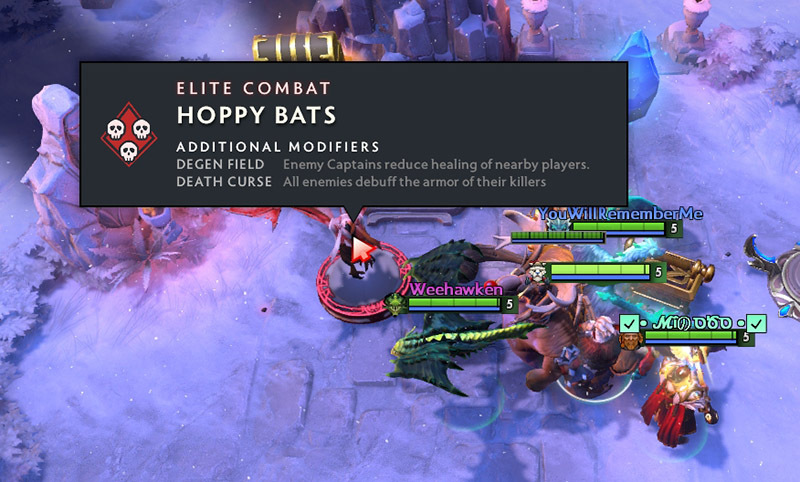 “Take Elites as much as possible, Elite talents win you the game” – SirActionSlacks

We’ve covered which heroes are viable in our Beginner’s Guide, but beating Grand Magus is not just about picking the “right” heroes. In one Labyrinth run you will get three legendary shards giving you buffs to your abilities. One at the start and one for defeating the first (Depth 6) and second boss room (Depth 13). That said the options you get are randomized, and sometimes you might not get lucky.

“Assess your teams strengths and weaknesses and keep continually assessing that as you get new shard choices through the run,” said Lewbot.  “Use that assessment to influence your skill build, item build and even your own shard choices as you progress through the labyrinth. E.g. if your DPS hero has been screwed over and doesn’t have the best shard choices to be a DPS, they could consider hybridizing into more of a utility/buffing hero to enable a different DPS who maybe did get great DPS shards.” 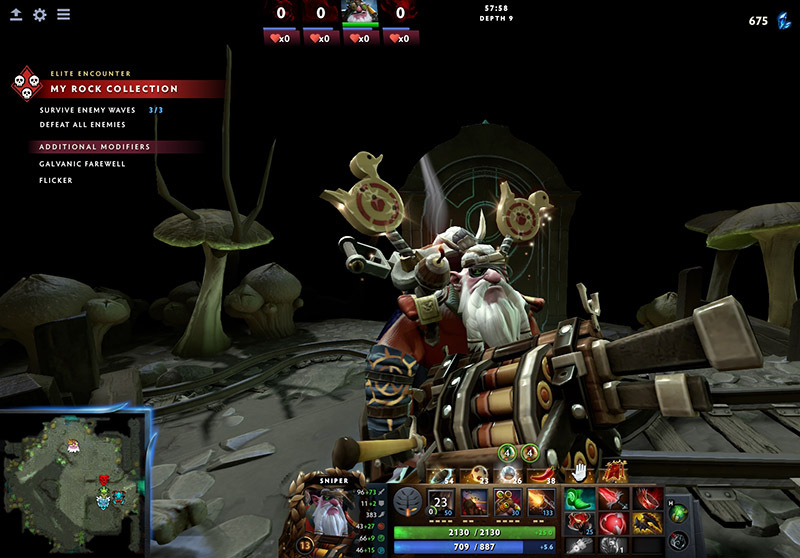 Sniper is a great pick but can be a glass cannon. Can you handle it?

Another useful piece of advice is not to blindly follow popular comps and pick heroes to match your skill level. “On leaderboards you see Weaver and Sniper because those players are so good they never get hit,” said SirActionSlacks. “However, both are risky. For the average player they need heroes that can survive making some mistakes.”

Sniper can be a glass cannon while Weaver’s bugs can easily accidentally aggro a huge horde of enemies and lead to your demise. We highly recommend Winter Wyvern and Disruptor for completing Grand Magus as safe picks, with Viper also incredibly viable.

“Viper with enough of the bonuses  can throw down nethertoxin in circles, which does damage and heals you. With the right Elite Talents you can have 100% uptime. No other hero has an ability like that,” said SirActionSlacks.

Your goal is to have as much ranged DPS in your 4-hero comp as possible versus Aghanim, and while the likes of Omniknight is great for an Apprentice run or to save moronic team-mates, he ends up just a spectator in the final stand on Grand Magus.

Follow our tips and you will be a Grand Magus!

How to defeat Aghanim once and for all

To defeat Aghanim is not as difficult in the higher difficulties as you might think, as he is not affected by Room Modifiers. He just has more health. To defeat Aghanim even on Grand Magus you only really need two things; Mobility and DPS.

Mobility is crucial, as it will allow you to easily outrun his lethal blue lasers. Boots of Travel 2 (+130 movement speed), Force Staffs or Force Boots are therefore incredibly sound investments.

In terms of DPS, ranged DPS is the way to go, and if you’ve got movement sorted, you’ll have time to focus on right clicking. You’ll want a mix of raw DPS items like Daedelus and Monkey King Bar, as well as armour reduction via Desolator and Solar Crest. To ensure you’re focusing on your right click mission, magic immunity is a must.

“Make sure you have BKB for the Aghanim boss at the very end,” said RallyingCry. “You can use BKB to dodge all of his mechanics; I choose to use it when he fires his spears. And use Force Staff to escape the laser beam attack.”

During the final battle Aghanim will steal one of your abilities after siphoning you for five seconds. Your ability will then be encased inside a shard around him, which you must destroy immediately to get back. If you want to be a Grand Magus you should also know that a Eul Sceptre Cyclone will stop him stealing your ability as will the Labyrinth neutral item Wand of the Brine (Puts friendly unit in a protective healing bubble).

However the biggest tip to ensure you don’t fall at the final hurdle, is that Aghanim does not regenerate health even at Grand Magus difficulty. Take your time, and if you see a team-mate getting a little too carried away, compliment him before telling him to chill. Slow and steady wins the race.

You’ll be a Grand Magus in no time.