How to play Verdansk International Airport 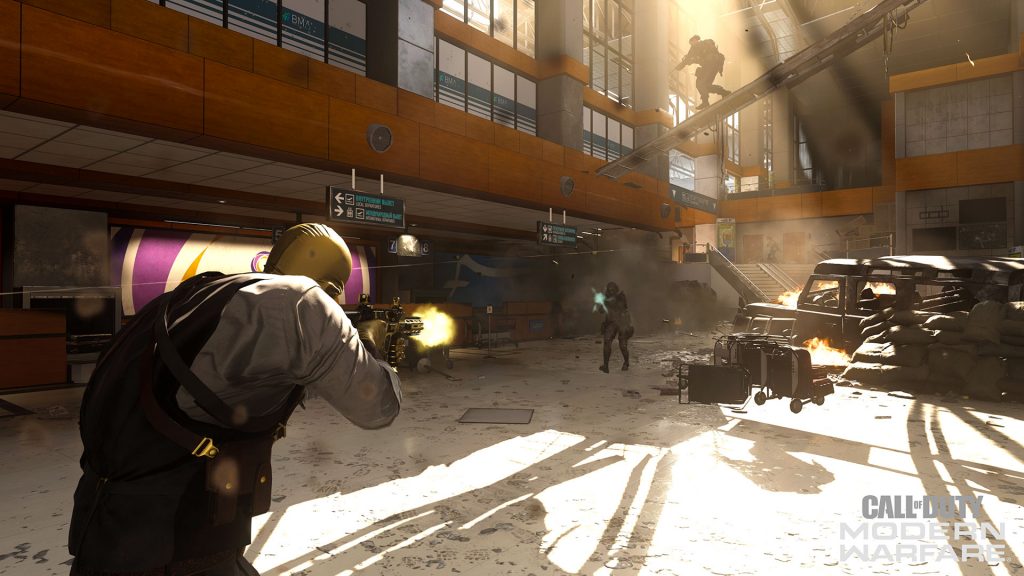 Season five of Call of Duty: Modern Warfare has introduced another part of the Warzone map to multiplayer. Ground War fans can now explore the Verdansk International Airport and fight in large scale battles across the iconic area.

The Verdansk International Airport and the surrounding area are perfect for long-range engagements and vehicular combat. Aggressive players will have a tough time navigating the open outside areas, but they can still defend flags and secure a victory. Remember to use the environment to your advantage and avoid being an easy kill for an enemy tank. 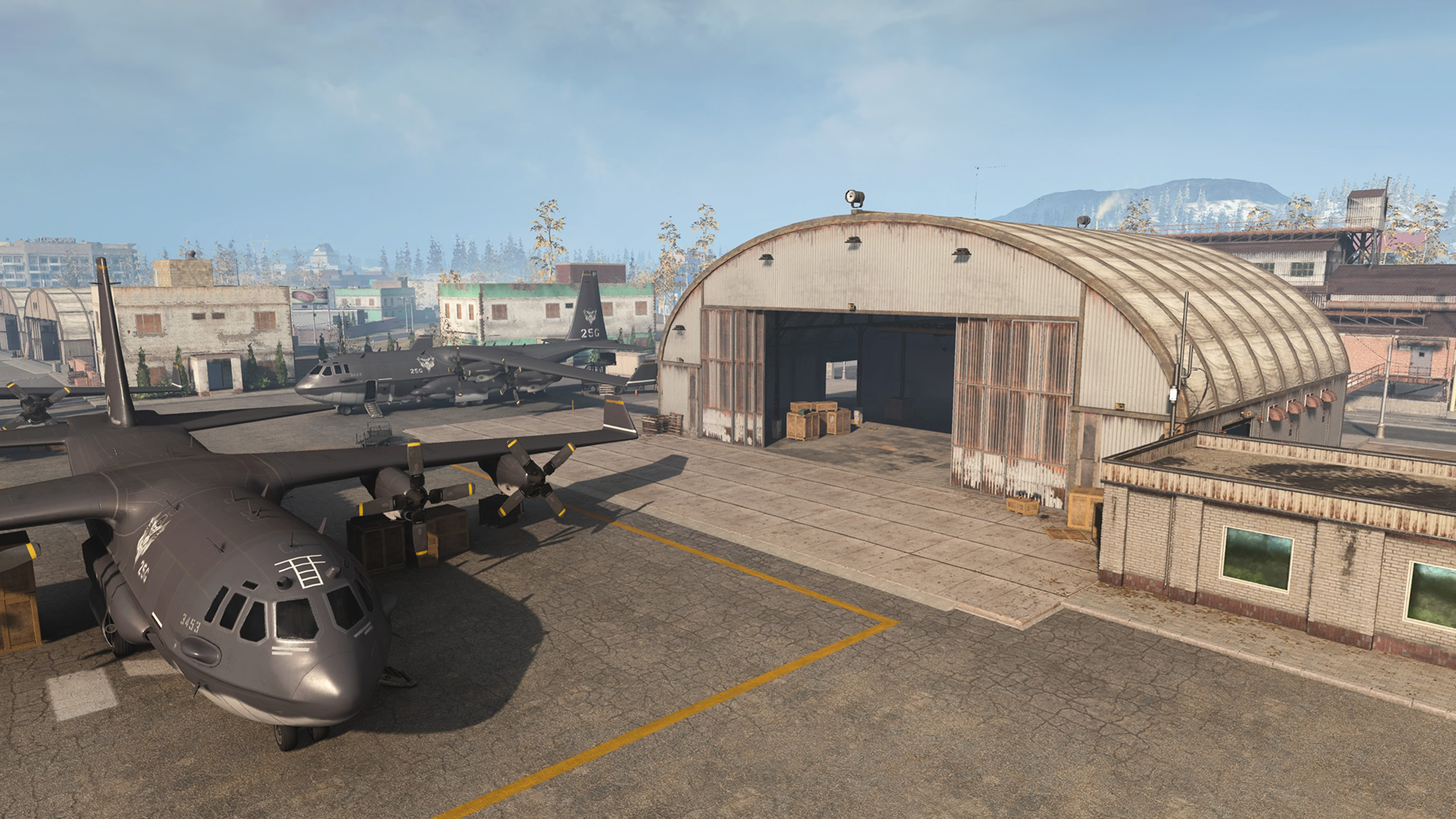 The Allegiance team spawns in Verdansk Airport maintenance area on the eastern side of the Airport. There are several buildings between the Allegiance spawn and the center of the map, which provide numerous ways for players to navigate the area.

Players can reach both outside lanes on either side of the hanger or push straight into the map through the Shipping Warehouse. Most firefights will occur near flags, so players should not expect massive resistance near the spawn. 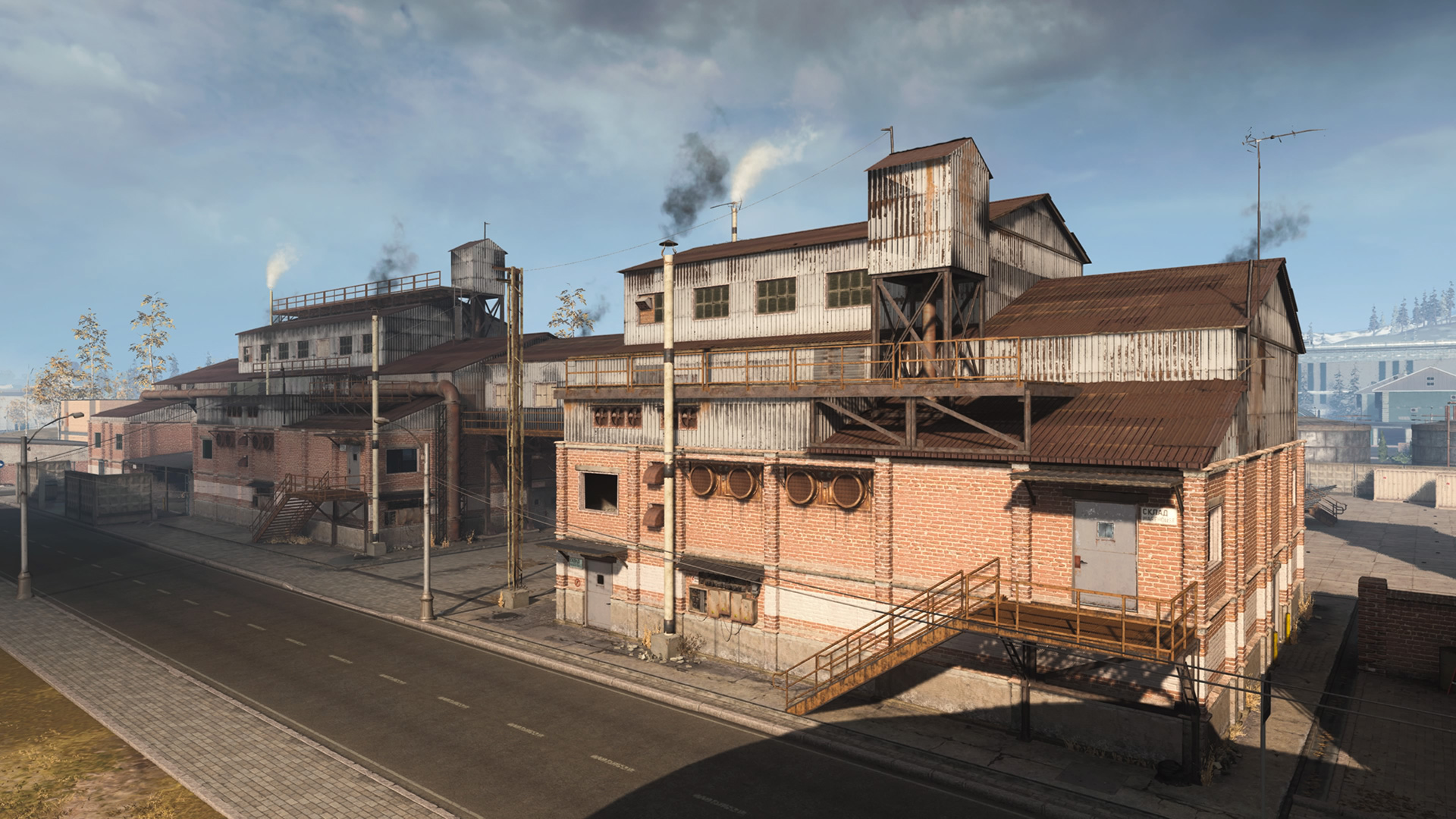 A large Shipping Warehouse is in front of the Allegiance Hangers, which provides decent vantage points on the middle part of the map. However, there are no flags in the immediate area, so players will not directly help their team capture or defend objectives. They can watch the outer lane near the Hangers and Fire Station and prevent enemy vehicles from flanking their teammates. 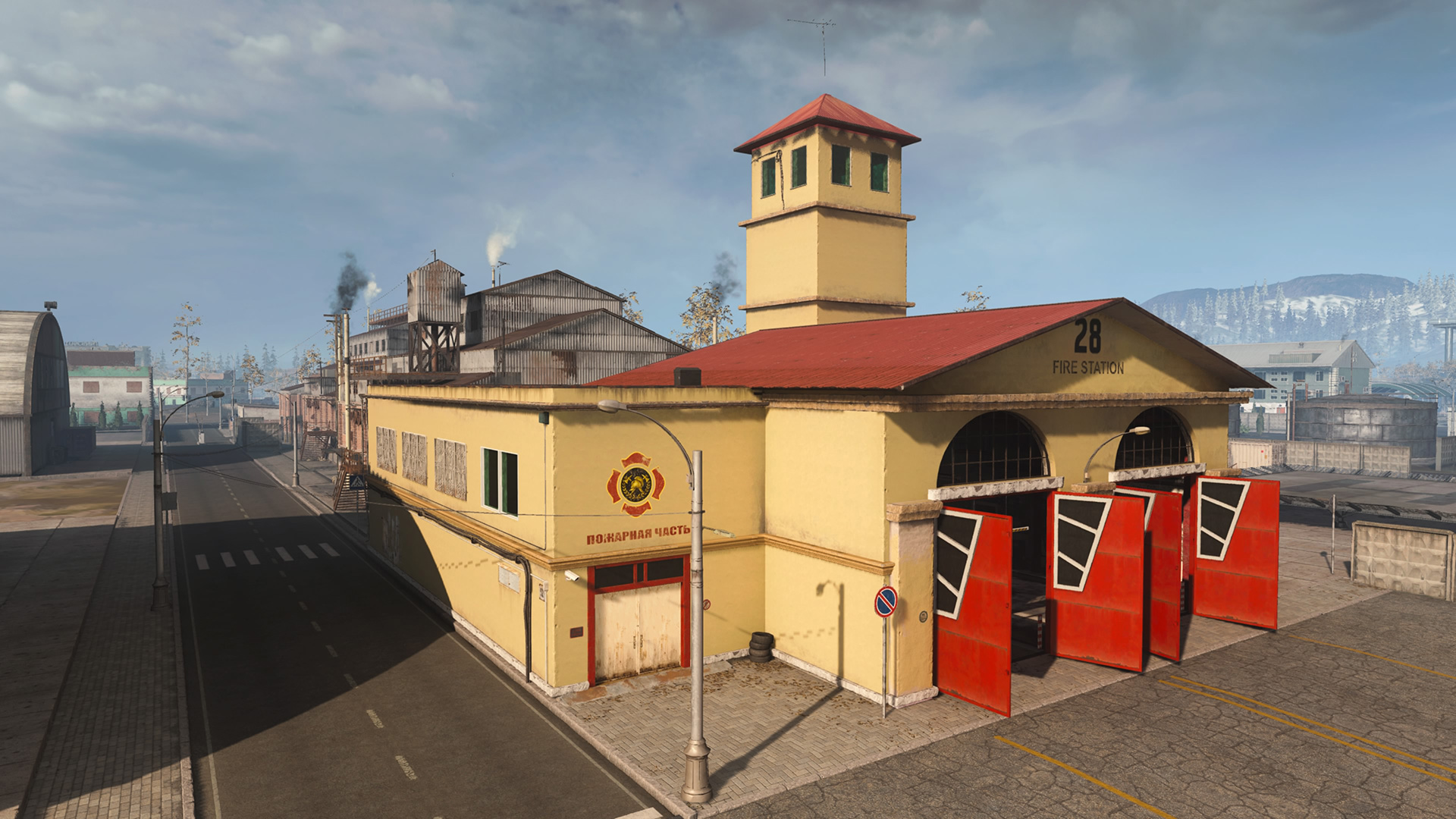 The Fire Station in Verdansk offers an excellent sniping position for players who want to cover the northern part of the map. Players can climb to the top of the tour and get a 360 view of the surrounding area. The first floor of the Fire Station is not as crucial to controlling this section of the map, but it does offer a line of sight towards the Hangers.

The Helipads are between the Fire Station and the Apartments. There is a large wall surrounding the landing zones that are excellent cover for players moving towards the airport. There are not many angles to hold on the Helipads, but players can watch the road in front of the Shipping Warehouse. 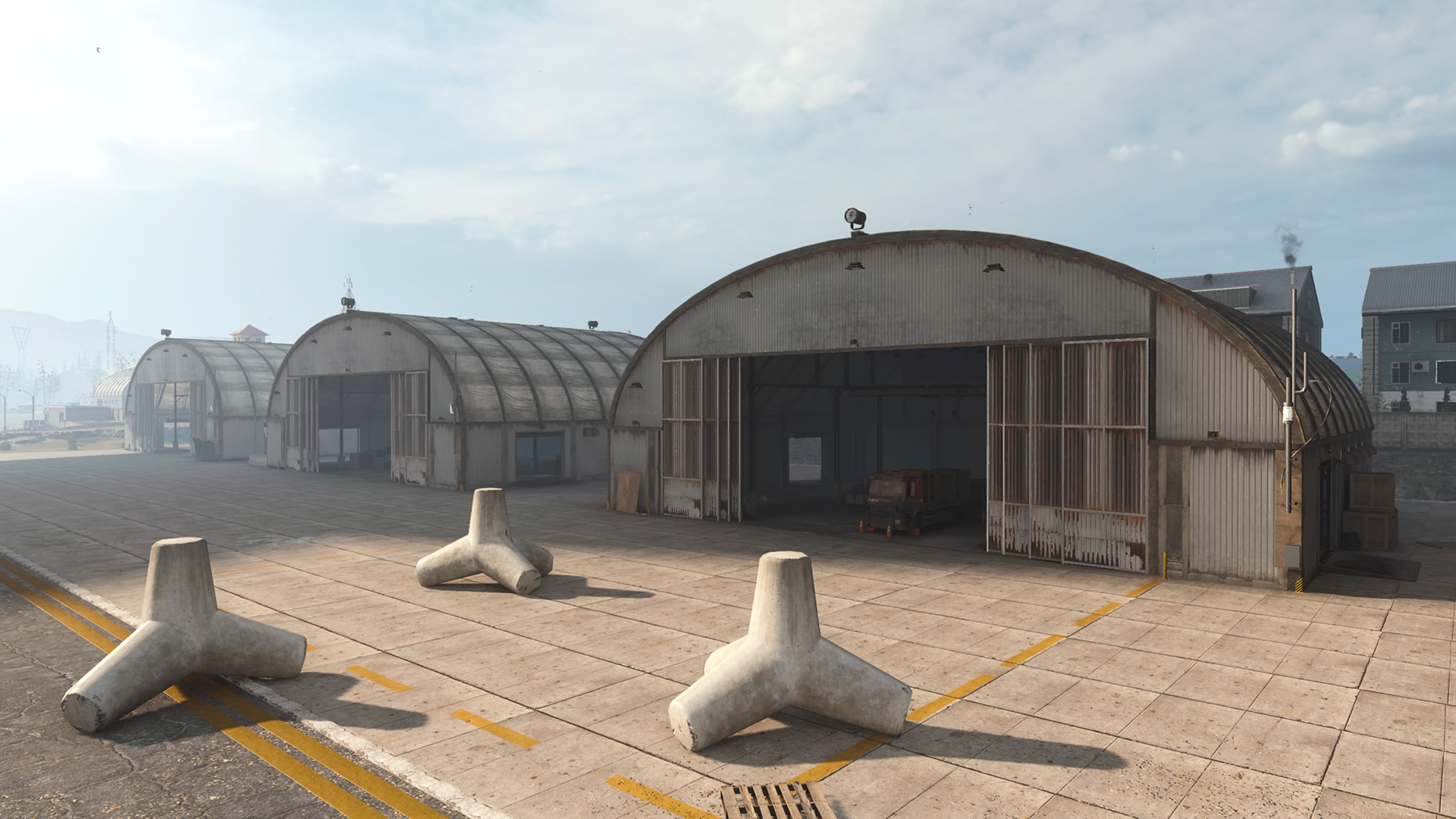 The Hangers are on the northern part of the map near the Allegiance Spawn. Players can enter the three hangers to cover their advancement alongside the edge of the map or cut off towards the Metro area.

This area is mainly used by players trying to flank around the enemy team and to apply pressure from a different angle. It is tough to break a flag in Ground War without a coordinated effort, but one player can cause a lot of damage if they can surprise the enemy from behind. 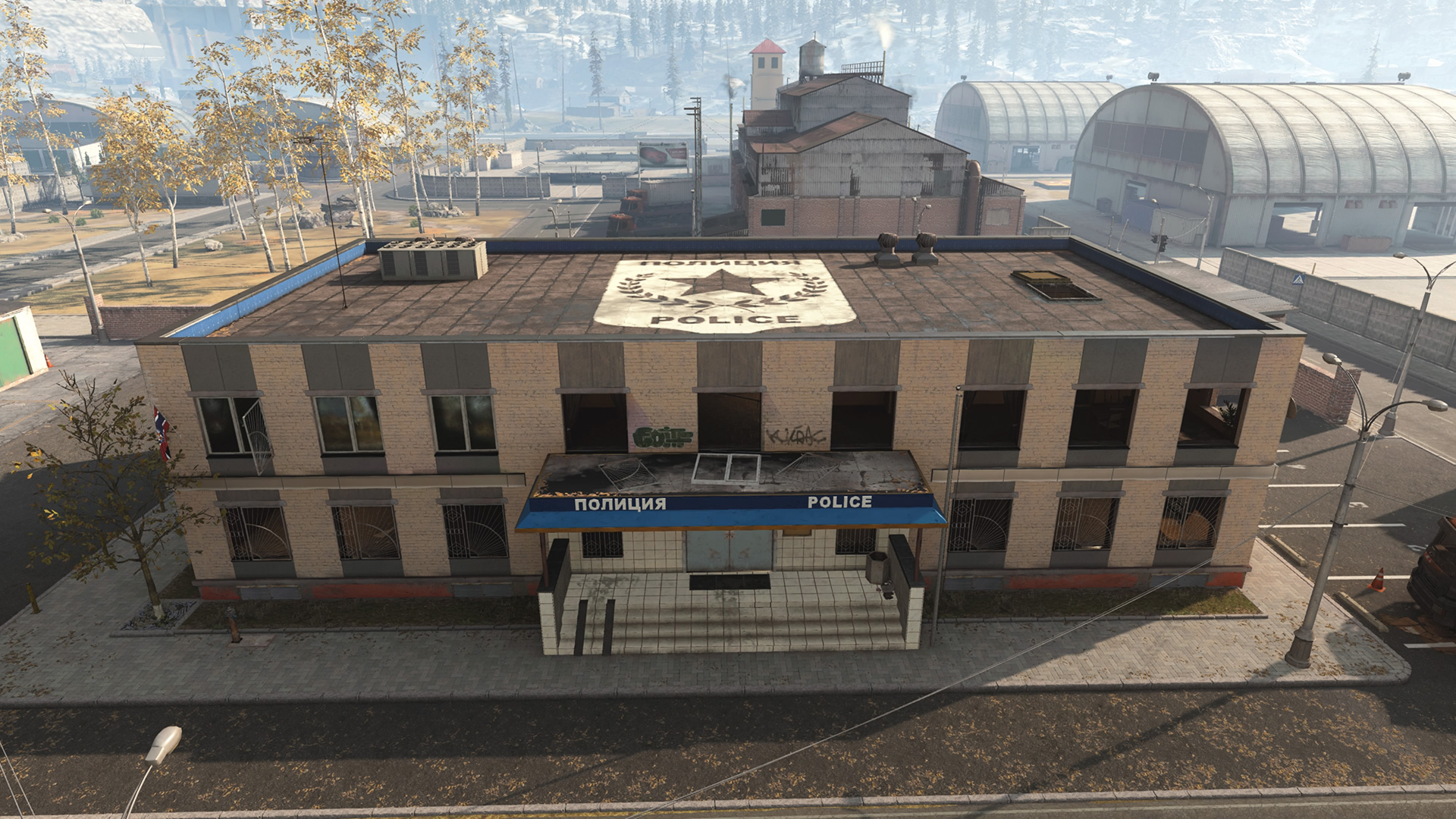 The Police Station is a two-story building directly behind the A flag. Both floors have lines of sight on the flag that players can use to cover the area and prevent enemies from taking the objective.

Players can access the Police Station roof, which provides a clear view of the surrounding area. It is a very exposed position, however, so look out for the snipers in the distance. The multiple entrances to the building make it a tough position to hold, so make sure to use equipment effectively to cover multiple entrances.

Apartments and Metro – B Flag 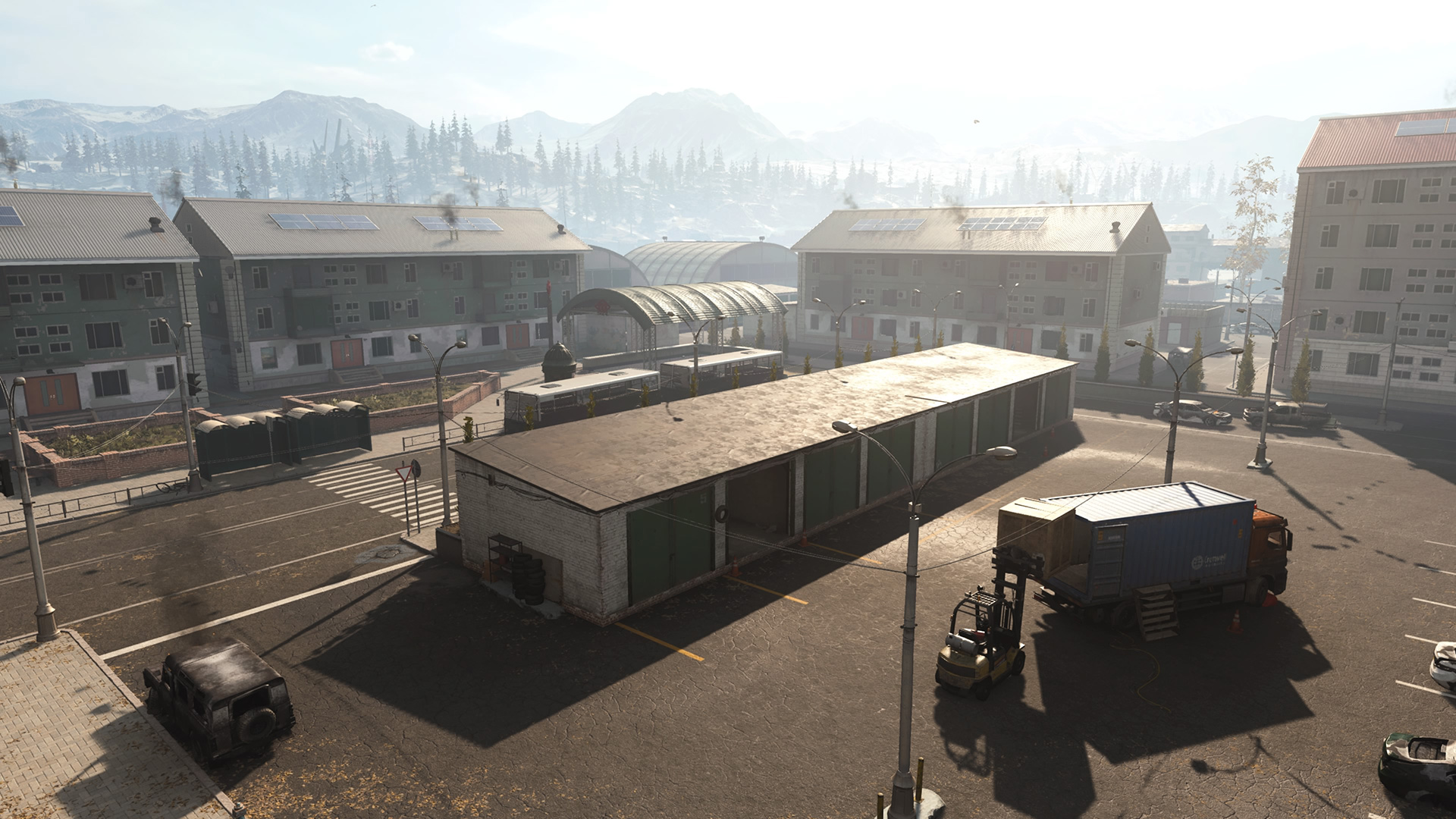 The B flag is in the center of a residential area in Verdansk with large apartment buildings on either side. There is also a Metro entrance near the flag, but the subway itself is inaccessible.

The Apartment buildings are perfect places for snipers to cover the B flag and watch for players pushing from either spawn. Players can get on top of almost the buildings in the area, which means running out in the open is a bad idea.

The Metro entrance does provide protection from the elevated positions near the B flag, but players will be trapped if enemies notice them.

There are also garages near the Metro entrance that serve as a buffer between this area and the Vehicle Showroom. Players can enter a couple of these small rooms, so make sure to clear out these secluded areas when traveling towards the B flag. 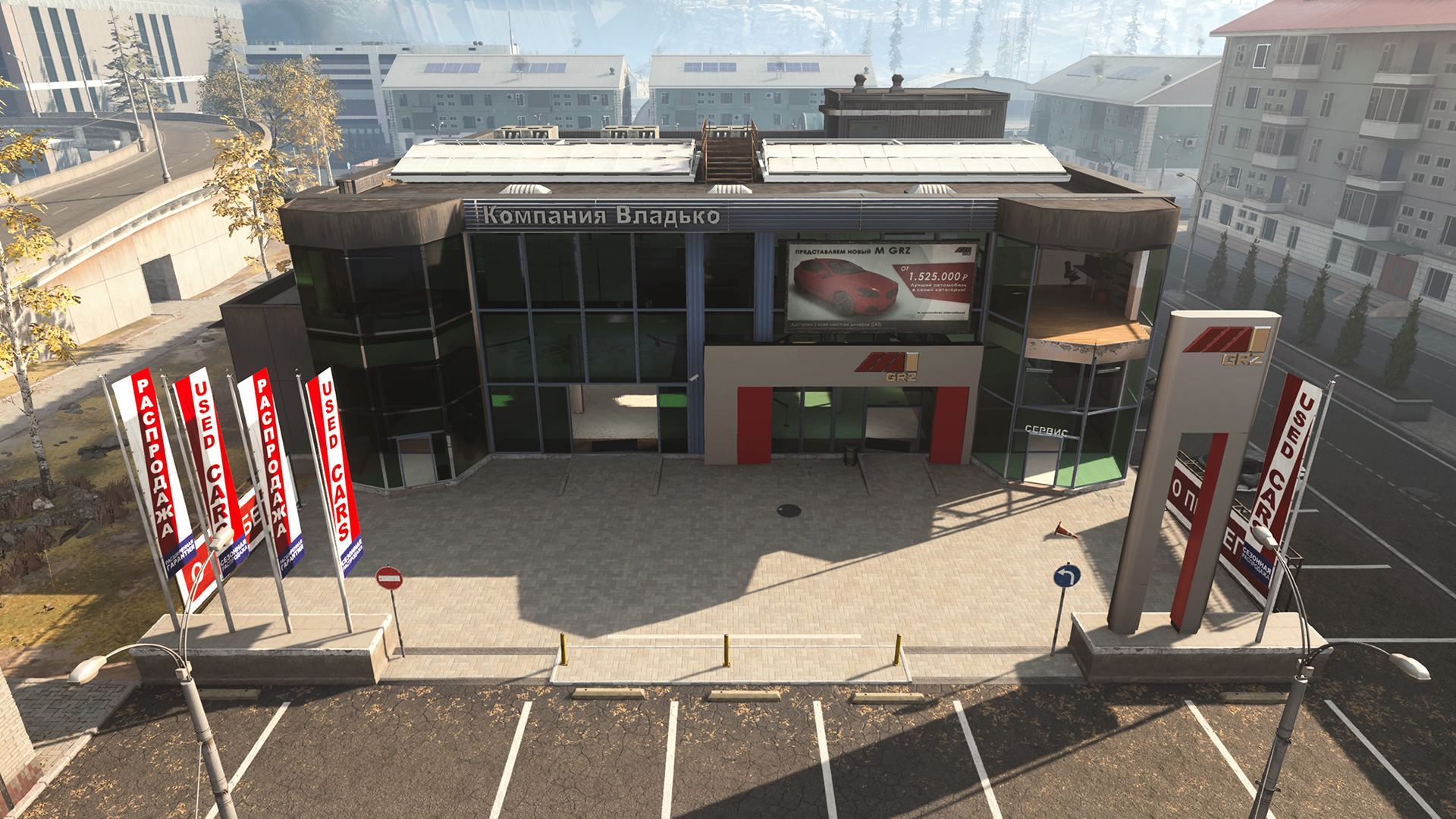 The Vehicle Showroom is a modern building with glass windows on all sides. The C Flag is located in the center of this building and is continuously contested in matches. Close range weapons will dominate in the cramped interior, but long-ranged weapons can prevent players from entering the building from either side.

The Vehicle Showroom is on the Southern part of the map and has open areas on either side. Players can sit towards their spawn and cover with sniper rifles or other long-range weapons to prevent enemies from taking the objective. Vehicles will often be near the Vehicle Showroom as it is next to a road that leads to either spawn. 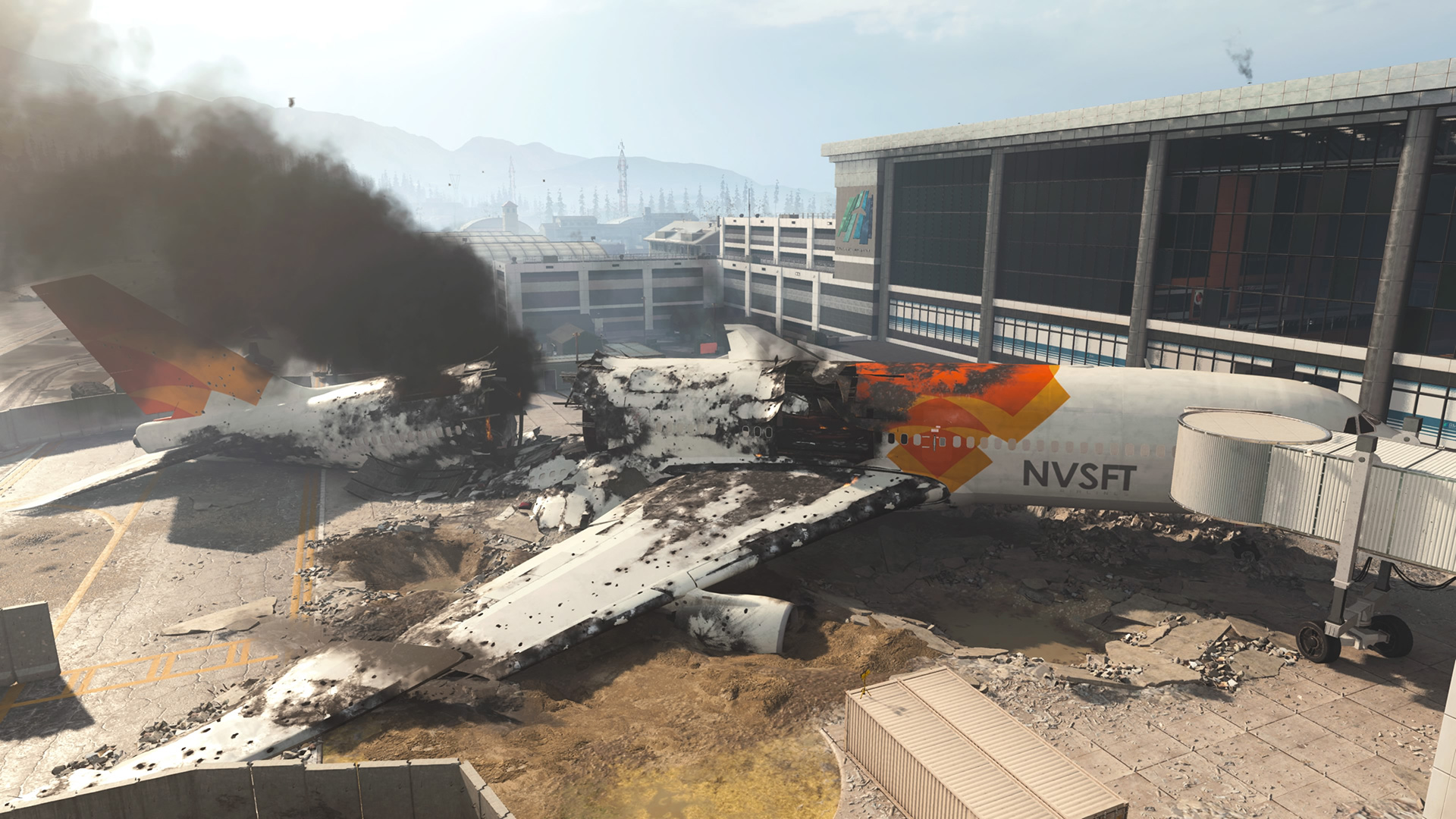 On the Northern side of the airport is a crashed plane that players can enter. There are no objectives near this location, but it is the perfect spot to sneak into the Coalition spawn and flank the E flag.

The Plane Wreckage itself is not very important, but the surrounding area provides access to the airport. There are several doors players can use to enter various floors of the airport and maneuver around the Coalition Spawn.

This area also leads to the Hangers, which means Coalition players can avoid the center of the map and push directly into the Allegiance Spawn. 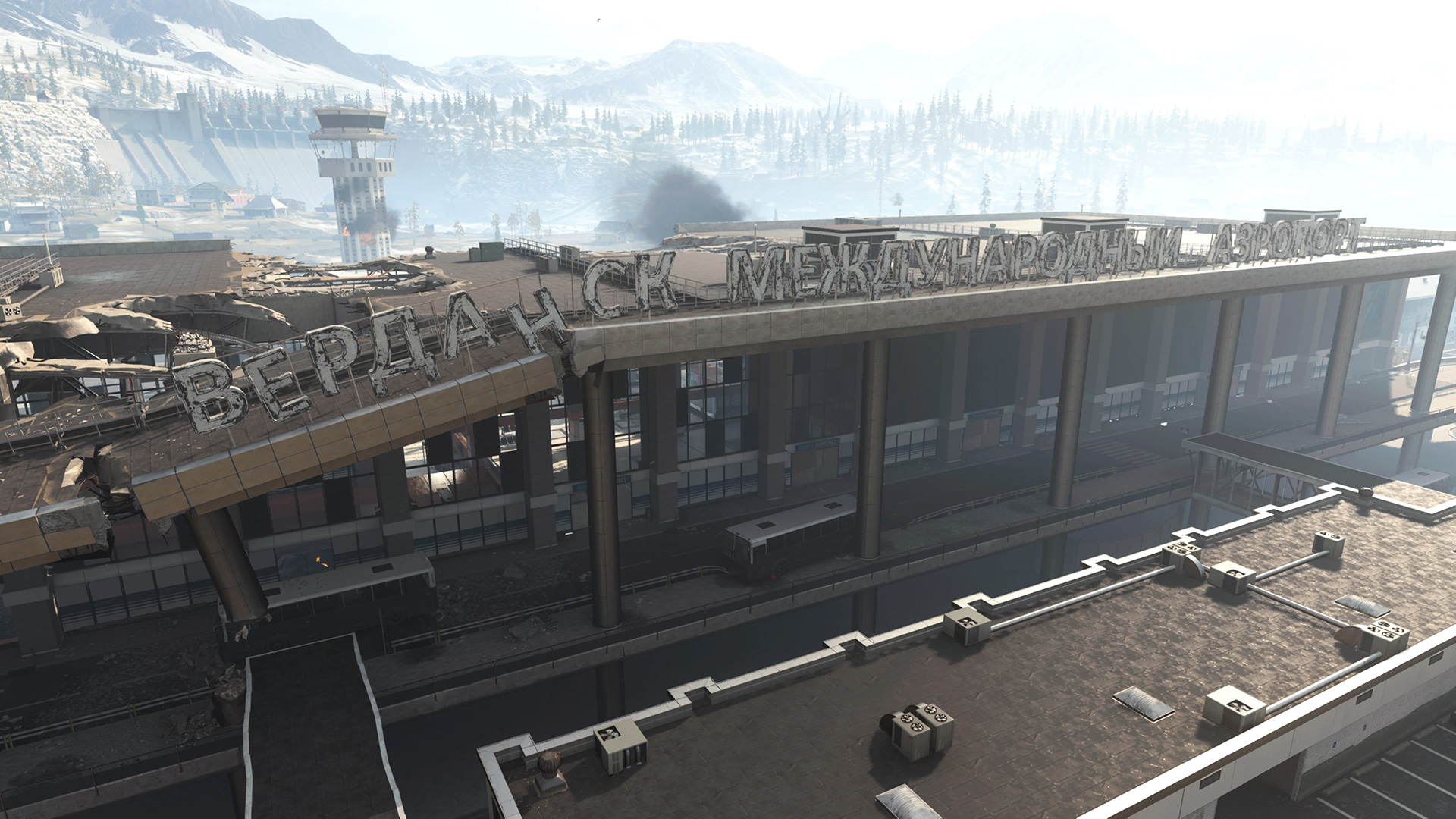 The Verdansk Internation Airport is one of the map’s focal points, but most of the fighting does not occur inside the building. The D flag is at the eastern end of the building towards the rest of the map. 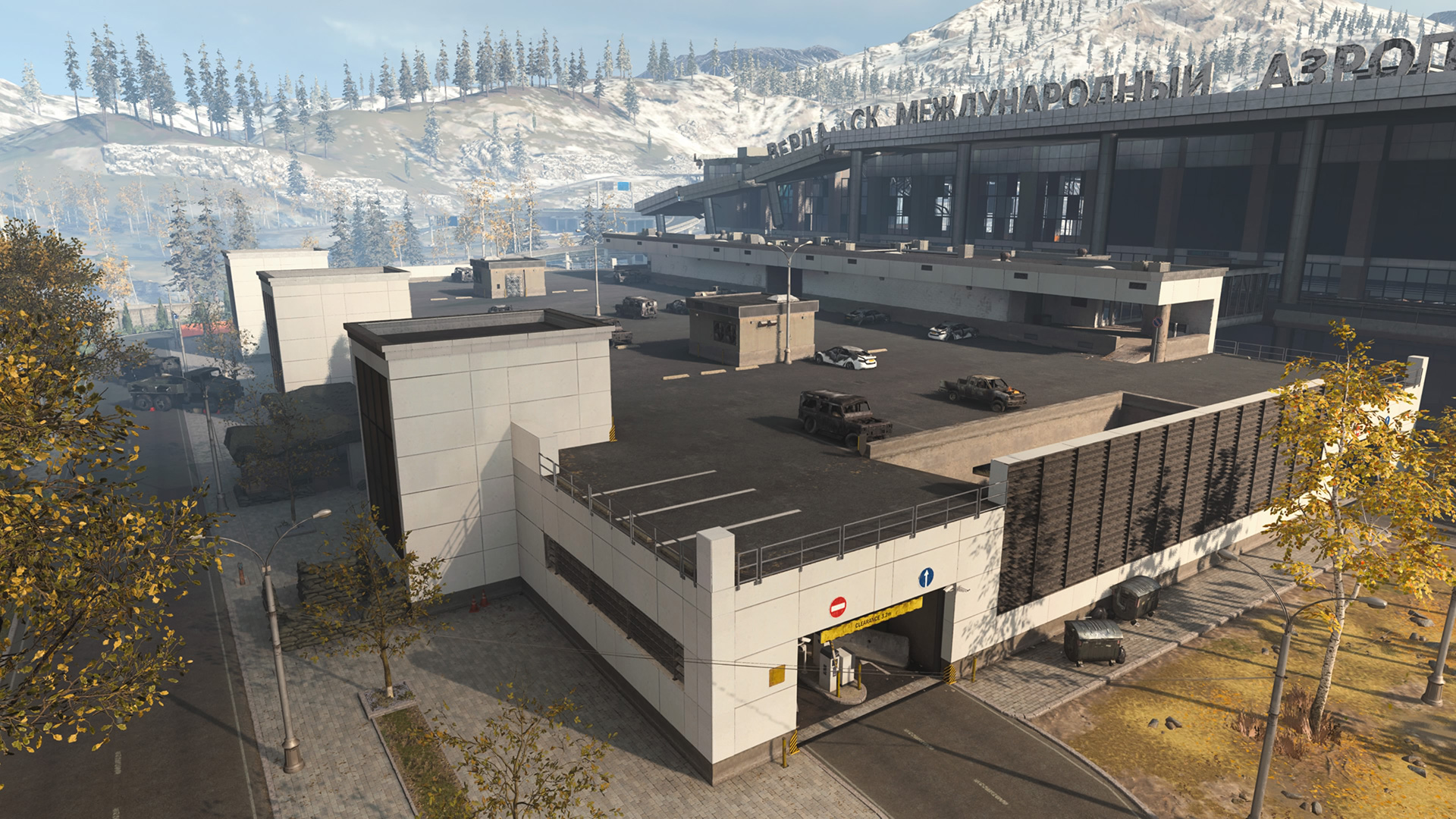 The Parking Structure is a massive two-story complex connected to the Airport and near the Coalition Spawn. This a popular area to land in Warzone and is just as hectic in Ground War.

The E flag is located in the southwest corner of the parking complex towards the Coalition Spawn. Players can push through the structure to reach the flag or use the road on the southern edge of the building. This path leads directly to the Coalition Spawn point, so its a good idea to have a rocket launcher or another means of defense when entering the area.

There are several stairways and ramps from the first to the second floor of the Parking Structure. Enemies usually cover the main ramps, but players can sneak past them using one of the tucked away staircases. Players can also use the sky bridges to enter the Airport and access the northern part of the map. 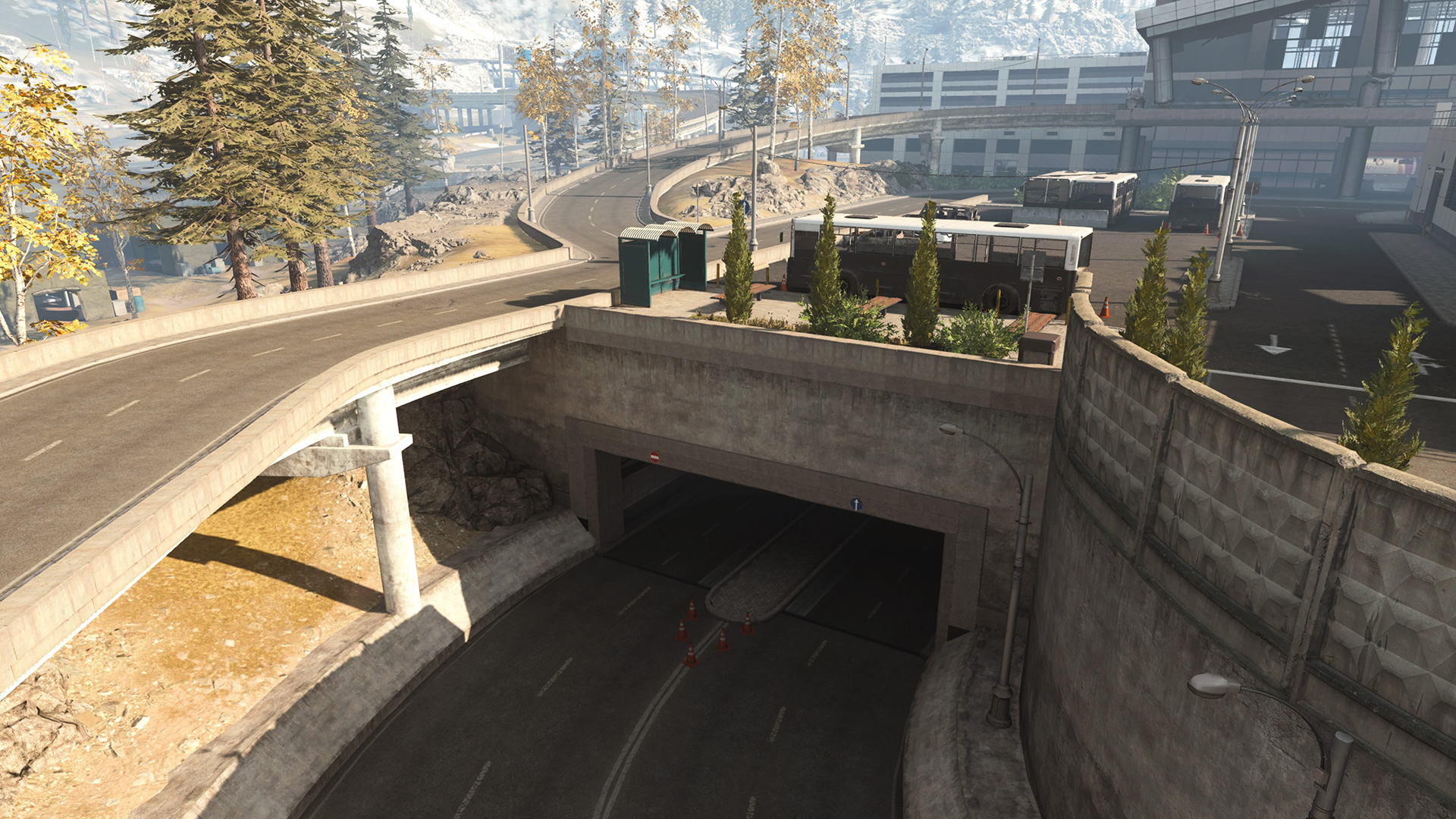 The Runaway Underpass and surrounding area serve as the Coalition Base and Spawn. Snipers with patience can use this area effectively, but everyone else should push in towards the middle of the map.

Coalition players can run directly towards the Parking Structure and Aiport to access the map’s central areas. They can also go underneath the Aiport to get to the Plane Wreckage and the northern lane, or they can go south towards an open road that leads towards the B and C flags.

Snipers can sit in the buses outside of the Parking Structure to hold the objective, or they can sit in the trees above the Underpass. This is an excellent way to cover the E flag if the enemy team is applying pressure, but be careful not to spend entire matches at this location as you can likely help your team further in the map.

Verdansk International Airport provides a nice mix of broad open areas and tight buildings for players to explore. Avoid getting caught in open spaces, and you can help your team achieve an easy victory.