How to Play Suldal Harbor 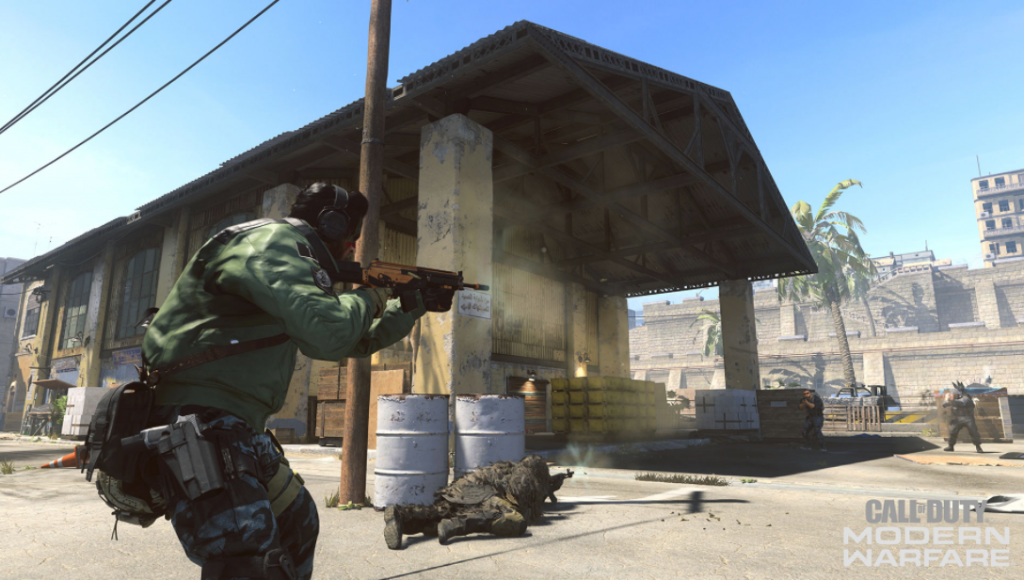 Suldal Harbor is a new multiplayer map introduced in Call of Duty: Modern Warfare Season Five. The claustrophobic and cluttered map is difficult to traverse and can be frustrating for players expecting a straightforward map. Players who take the time to learn each area and understand how to avoid running into the same tight chokeholds and regions will play better and have a far better experience. 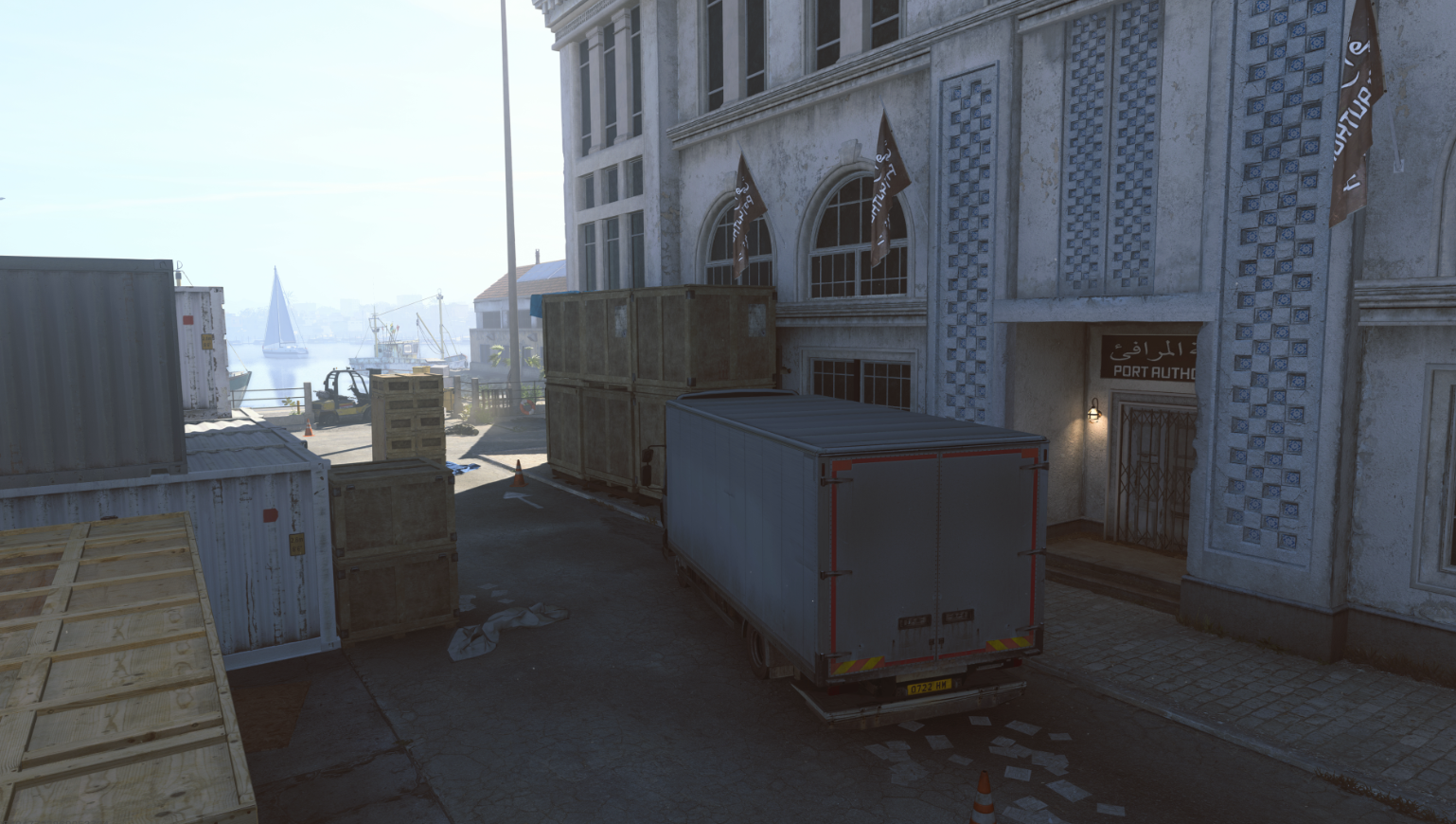 The Port Authority Building in Suldal Harbor is at the northern end of the map directly behind the Containers. The building is inaccessible and serves as a barrier for the edge of the map. This area is not an essential part of the map, but it is next to Containers, a hotbed in several game modes.

This area runs along the entire northern part of the map and features various objects that can be used as cover. A large truck on the east side of the Port Authority Building can provide protection from the left side of the Containers. Players can also cover the Storage area from this position.

There is a small crate that players can climb to reach the second level of the Containers directly above the A Domination flag. This is an excellent area to protect your home flag if the enemy has spawn trapped or pushed you back to the spawn area.

On the opposite side of the building are two stacks of crates that can also be used to cover the Containers. This area is a good way to maneuver around the Containers, but most of the action happens within the labyrinth of metal storage containers. 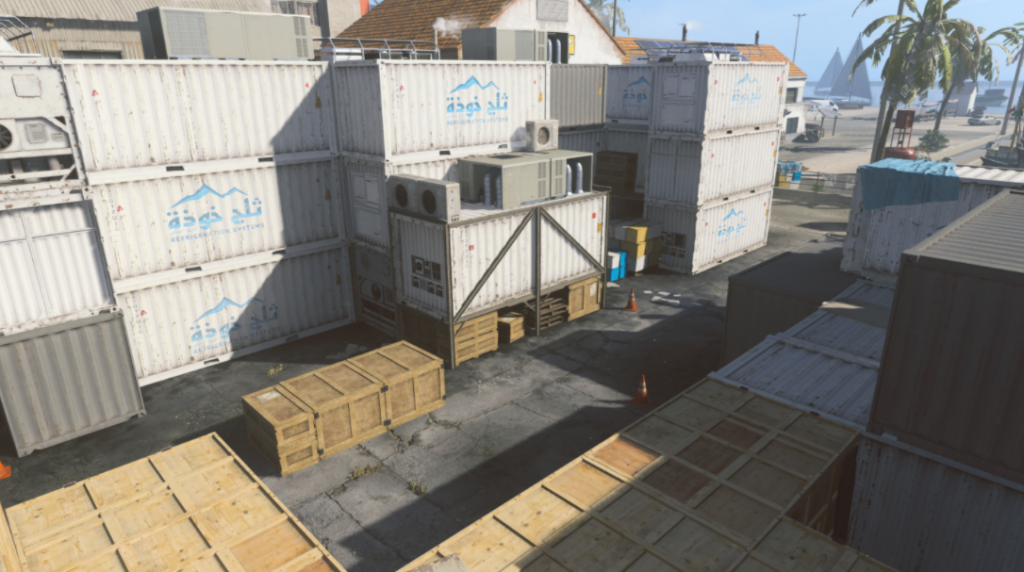 The A flag in Domination and fifth hill in Hardpoint are located in the Containers area, which means it is a critical location in most matches. There are several small nooks and corners players can hide when defending the area, but there are also multiple ways for enemies to take the position.

Players can flank the main Container area by climbing from the Port Authority side, which leads to an elevated position. There is a clear line of sight to the entire bottom level, and a quick player can easily take out multiple enemies.

Defending players covering the alley or Locker stairway can climb to the third level on the opposite side of the containers. This small area is perfect for holding two of the main entries into the area and can keep the enemy team at a distance. 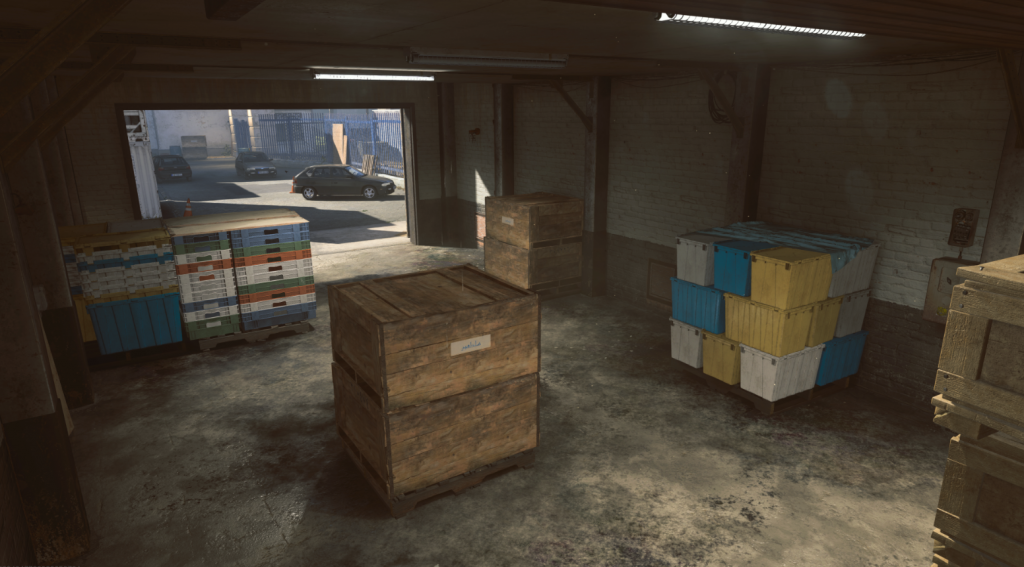 The Storage area is a cluttered warehouse that connects the Containers and Forklift areas. There are five stacks of crates in the interior Storage area that players can use as protection while moving. Players should be wary of campers, however, as the sharp corners are perfect hiding places. 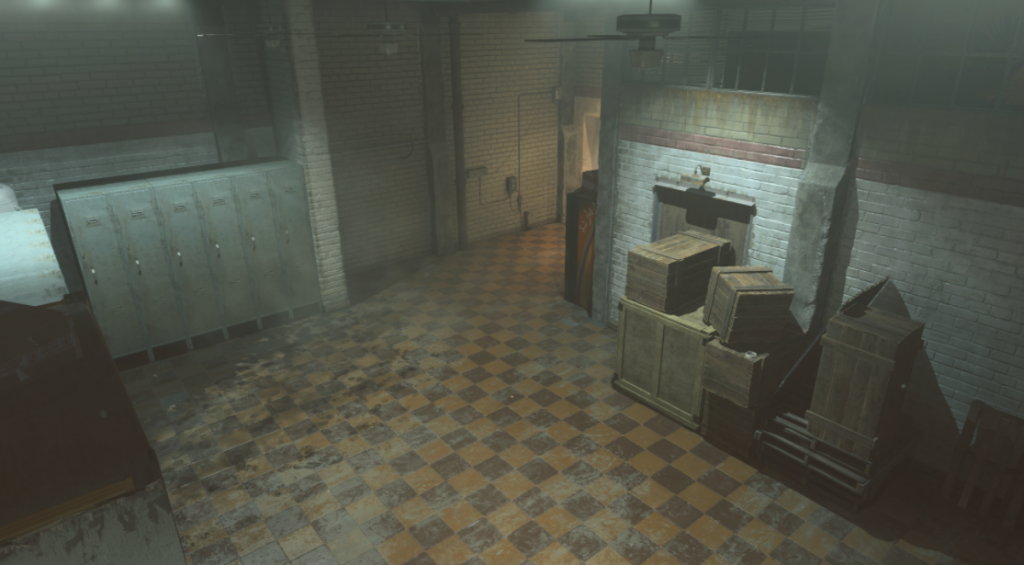 The Lockers area in Suldal Harbor is directly above the Storage area and is connected to the Office. There is also a stairway leading from the Lockers to the Containers. This area mainly serves as a connector between other significant parts of the map, but it is still essential to hold to prevent flanks.

Players covering the Forklift or Alley from the Office should check the Lockers periodically to avoid being easily killed. 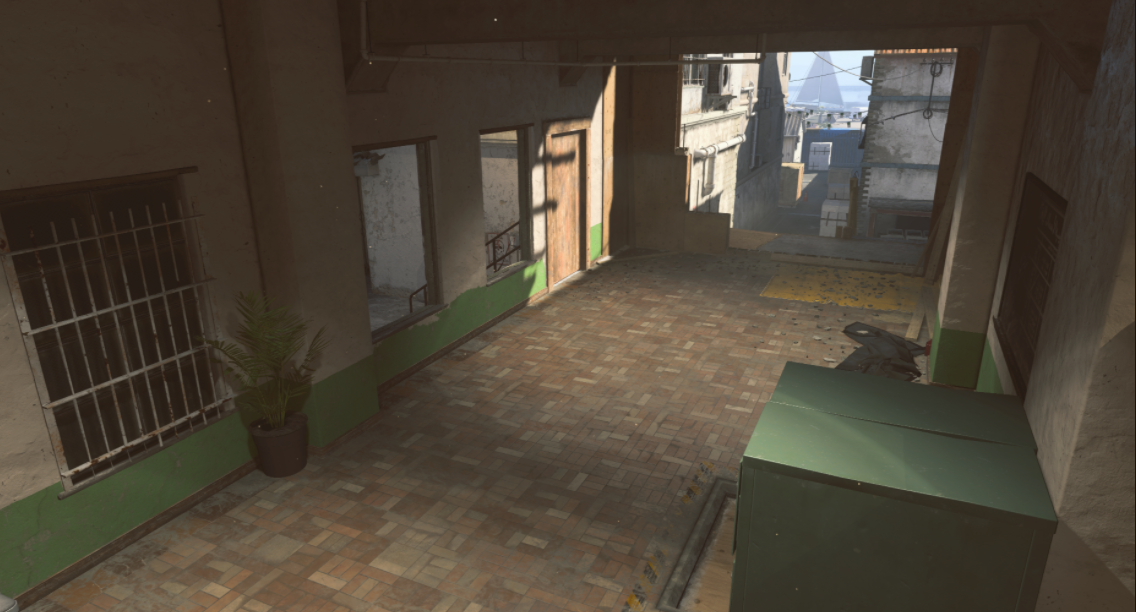 The Office overlooks the Forklift area and is across from the Lunch Room. The right side of the room overlooks the Alley, and players with long-ranged weapons can also cover the Courtyard.

This area is an integral part of the map as it covers two of the main connectors from each spawn area. Players are continually pushing through the Forklift and Alley areas to flank or capture objectives, so players can sit in the Office and stop them in their tracks.

The constant traffic in the Office makes it a tough area to hold, so don’t be surprised if both teams are constantly controlling it during a game. 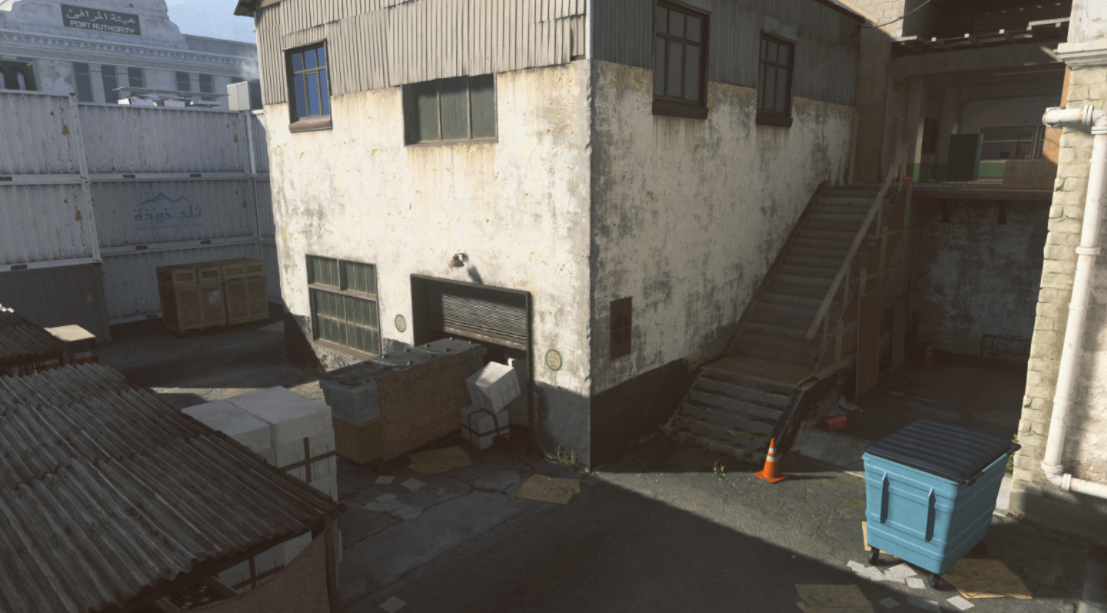 Suldal Harbor is one of the most claustrophobic and cluttered maps in Modern Warfare, and the Alley is a perfect example. This area connects the Containers, Office, and Courtyard and is a vital choke point on the map.

The Alley is the location of the first hill in Hardpoint and the B flag in Domination. Players will always be moving through this area from one of the three adjacent locations, which means at least one player should be covering it.

There is a covered spot directly beneath the Office that players can use to cover the Courtyard Entry and to hold the various objectives. There is also a blue dumpster in the center of the Alley that can be used to watch all three entries depending on the spawns. The Container and Courtyard entries also have stacks of crates that protect players attempting to navigate the dangerous area. 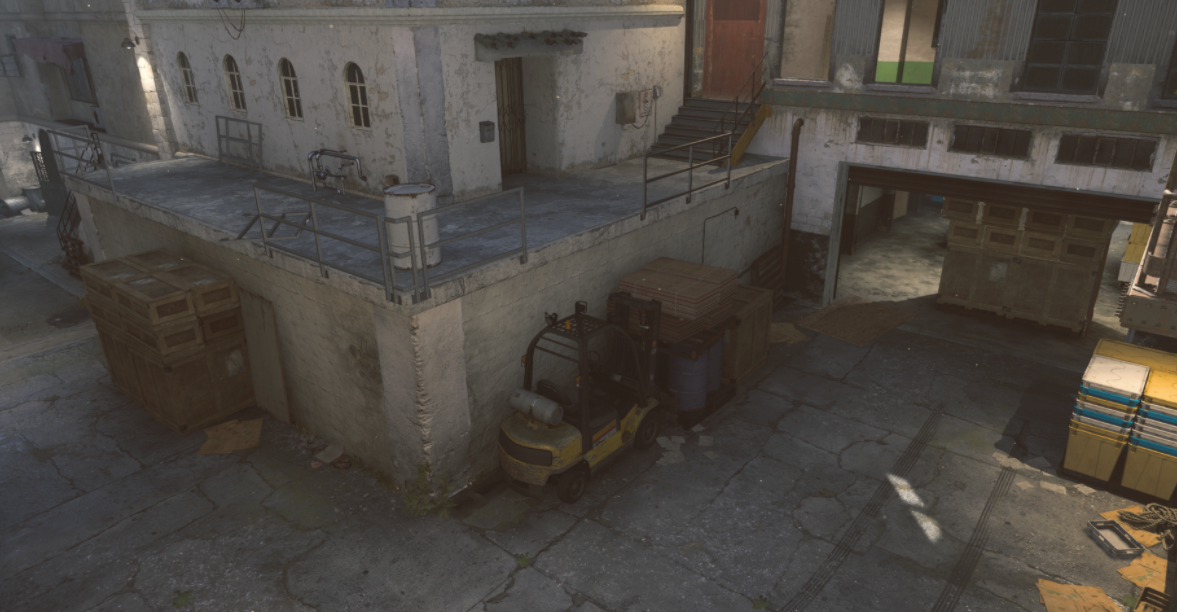 It is never a good idea to stay exposed for very long in Call of Duty, which is why players should avoid staying in the Forklift area. The outdoor space is overlooked by the Office and Lunch Room and entries to the Storage area and Cooler Room.

The Forklift and a few stacks of crates can protect players from elevated positions, but players should move quickly through this area. 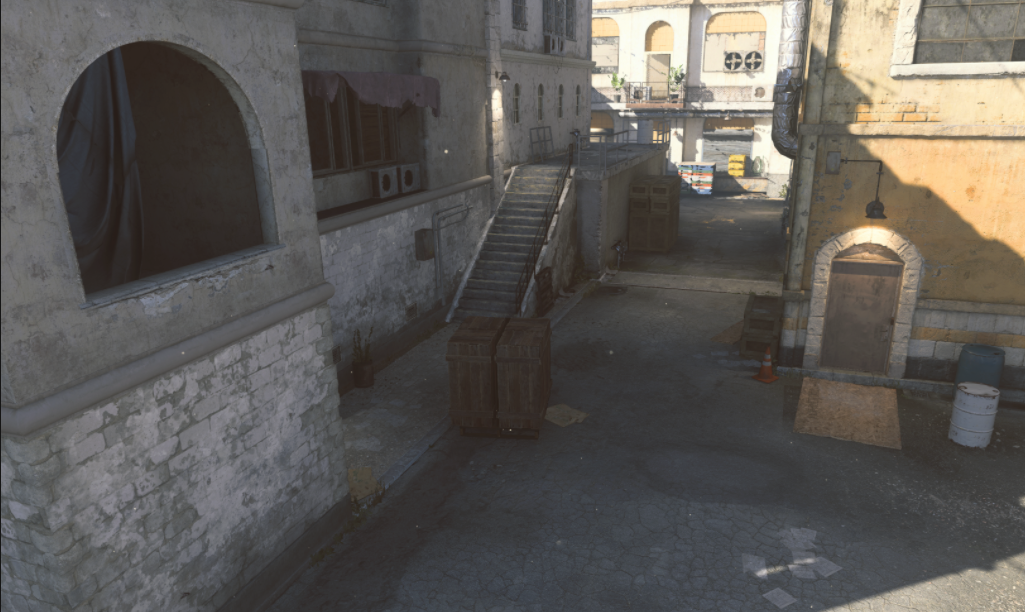 The Apartments building in Suldal Harbor is between the Warehouse and Courtyard and also has access to the Cooler Room. There is also a stairway leading to the Office that runs alongside the Forklift area.

The Apartments mainly serve as a buffer between the other locations, but there are a few spots where players can cover the Allegiance spawn. Two sets of crates can protect players covering the Cooler Room or Back Alley entrance. They can also be used to watch the Courtyard, Warehouse, and Office stairway. 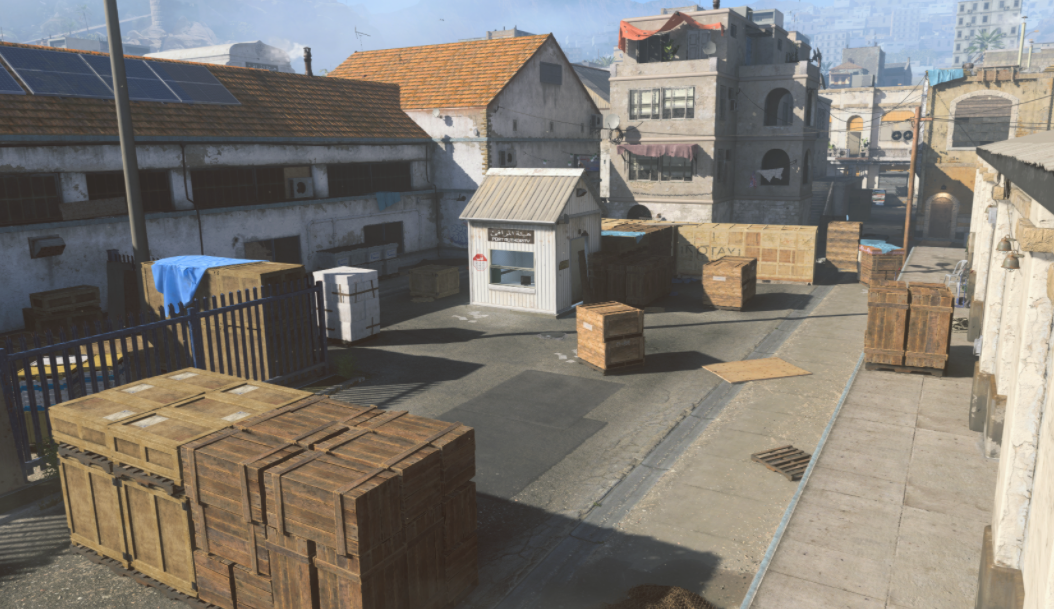 The Courtyard is located on the western part of the map and connects the Alley, Apartments, and Warehouse areas. Both sides of the Courtyard also provides a clear line of sight into the Office and Forklift areas.

The Courtyard is the location of the fourth hill in Hardpoint and is a tough area to hold. Two large crates provide a passage from the Alley to the Apartments, but players can use a small building in the middle of the Courtyard to watch over the area.

There are several angles and lines of sight players can use to watch both entries into the area, so taking the location can be difficult. There are several ways to enter the Courtyard from the Warehouse area, allowing players to overwhelm the enemy if they work together.

The back of the Courtyard has another stack of wooden crates that players hide behind when defending the Hardpoint or calling in killstreaks. Make sure to check all corners when running through this confusing location. 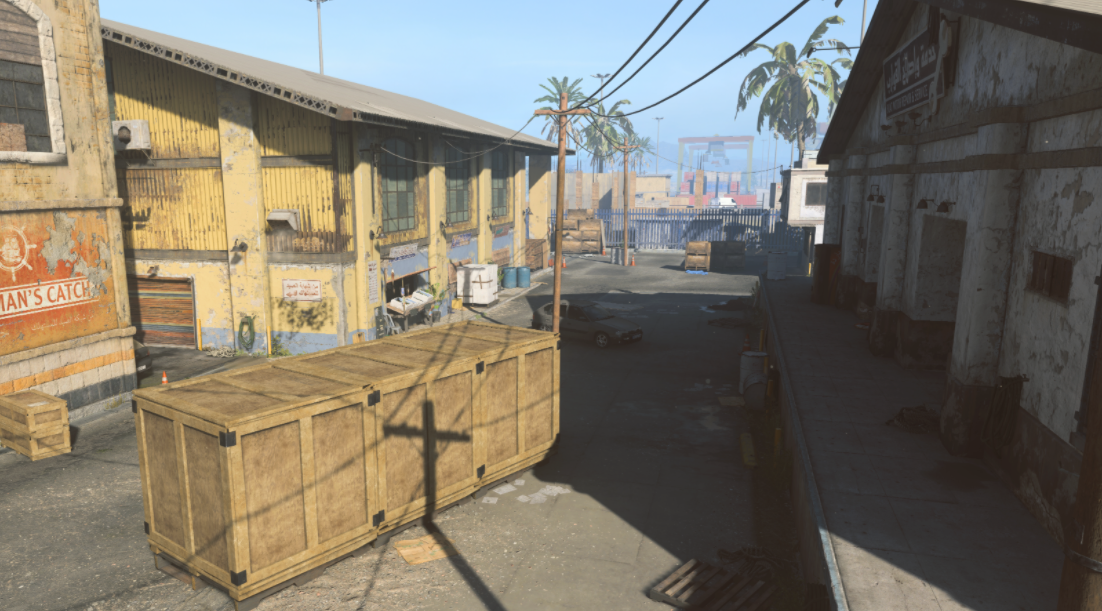 The Warehouse in Suldal Harbor is a large building that is adjacent to the Courtyard, Market, and Apartment areas. The Market is a small row of shops between the Warehouse, Cooler Room, and Market Storage areas. Both areas make up a broad open street that is the location of the C flag in Domination.

The elevated Warehouse platform goes around the entire building and provides a view over the various objects. There is little strategic value in the Market area, but there are two blue barrels and white a container that gives a way to watch the Courtyard entrance safely.

There is a large wooden crate in front of the warehouse that covers players exiting the Courtyard, but they will still have to cross an open area if they want to enter the Forklift or Cooler Room areas.

Players should avoid running through this large open area if possible, as there are several places for players to hide. 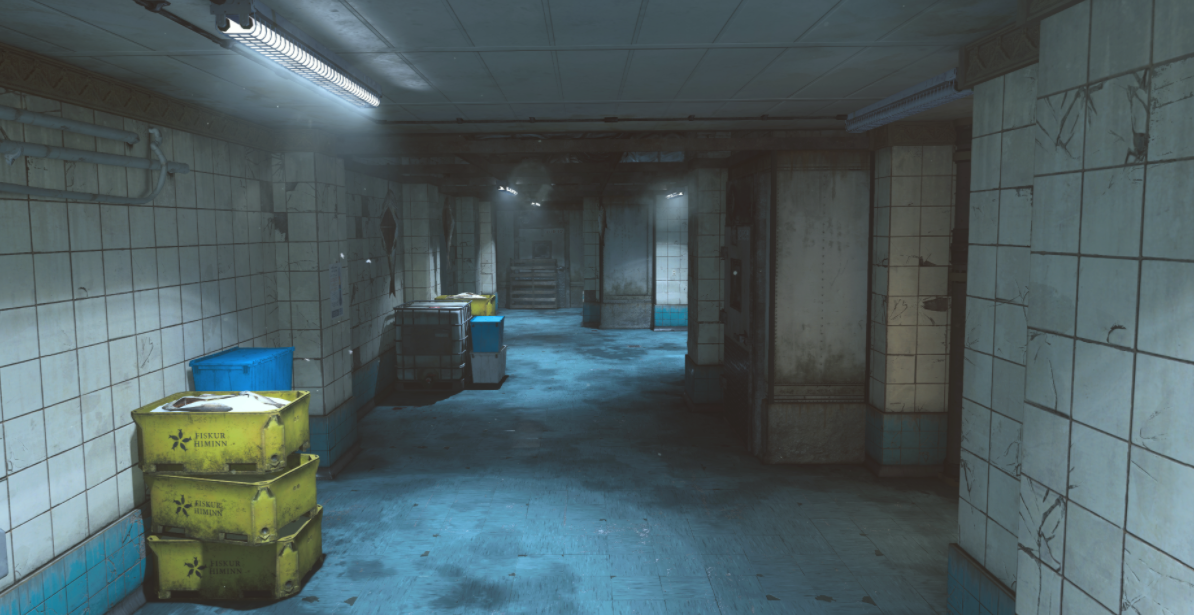 The Cooler Room is below the Lunch Room and connects to the Forklift, Warehouse, and Back Alley areas. Players will often push through the Cooler Room to reach the southern part of the map.

Two stairways lead to the Lunch Room, which provides multiple options for players trying to eliminate enemies holding the second floor. The other two exits lead to the Warehouse and Market areas, but players can also reach the Back Alley from the first exit. 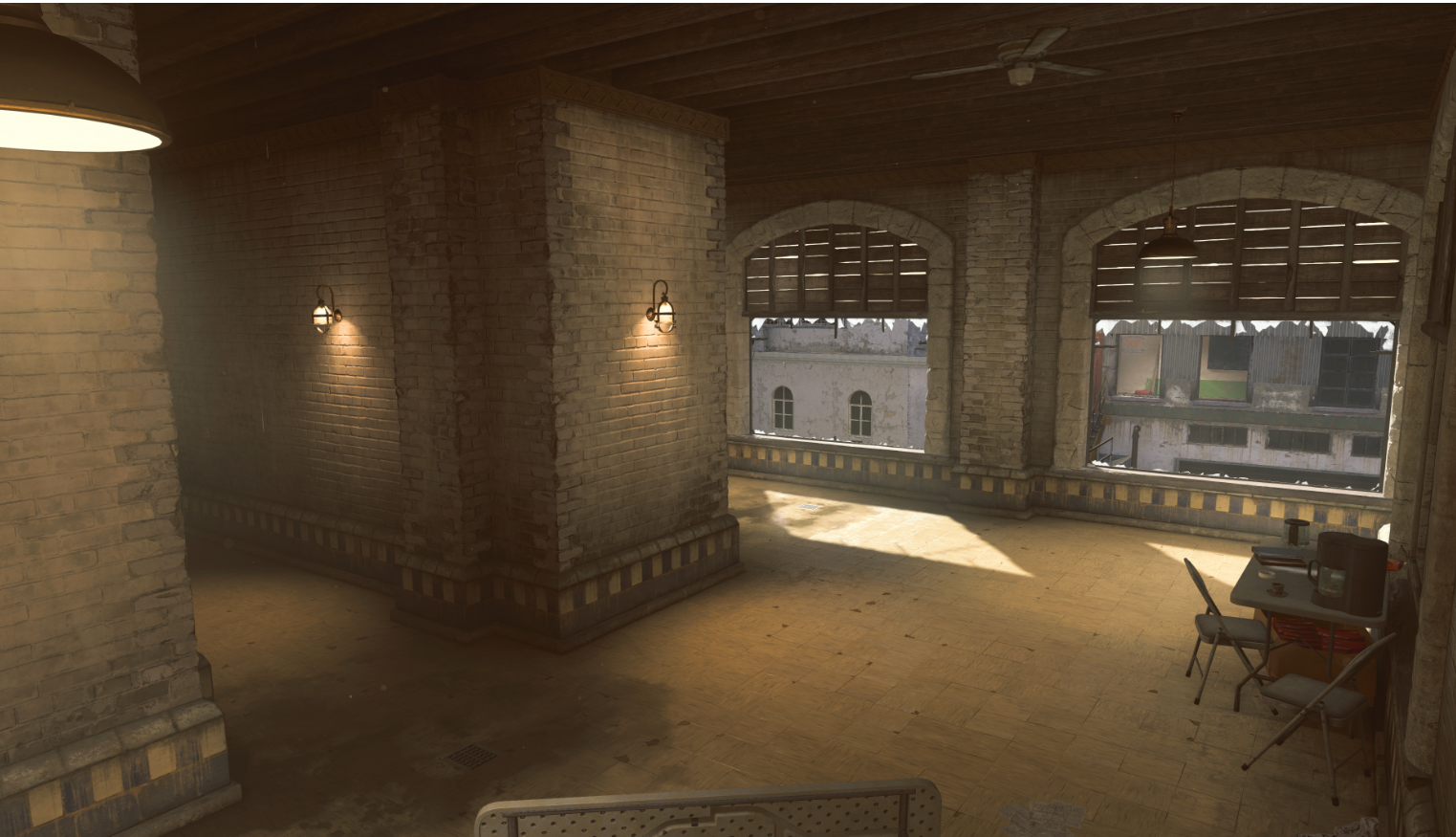 The Lunch Room overlooks the Forklift and Apartment areas and is across from the Office. Players will use the windows to prevent players from pushing the Office into the Alley, or anyone moving through the Storage area. This area and the Office make the Forklift location very difficult to navigate as players have elevated positions with clear lines of sight in either building. 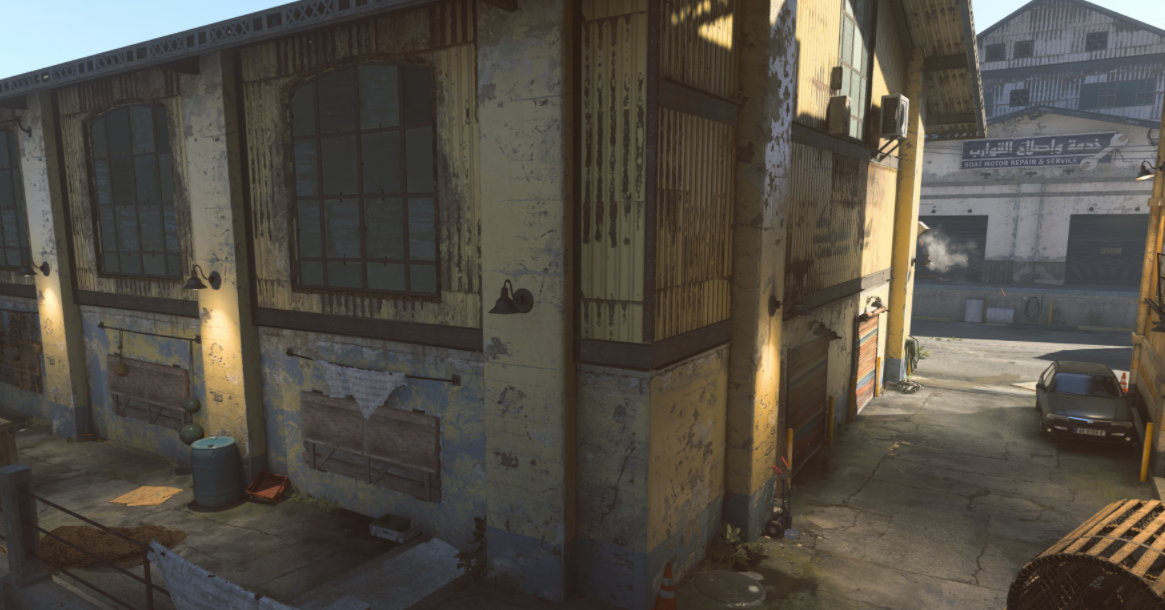 The Back Alley wraps around the Market area and connects the Cooler Room to the Market Storage and Cleaning Station. This narrow passageway is an excellent alternative to running through the ample open space between the Market and Warehouse.

Players can also use the Back Alley to flank enemies defending the C Flag in domination to either switch spawns or maintain control of all three flags. 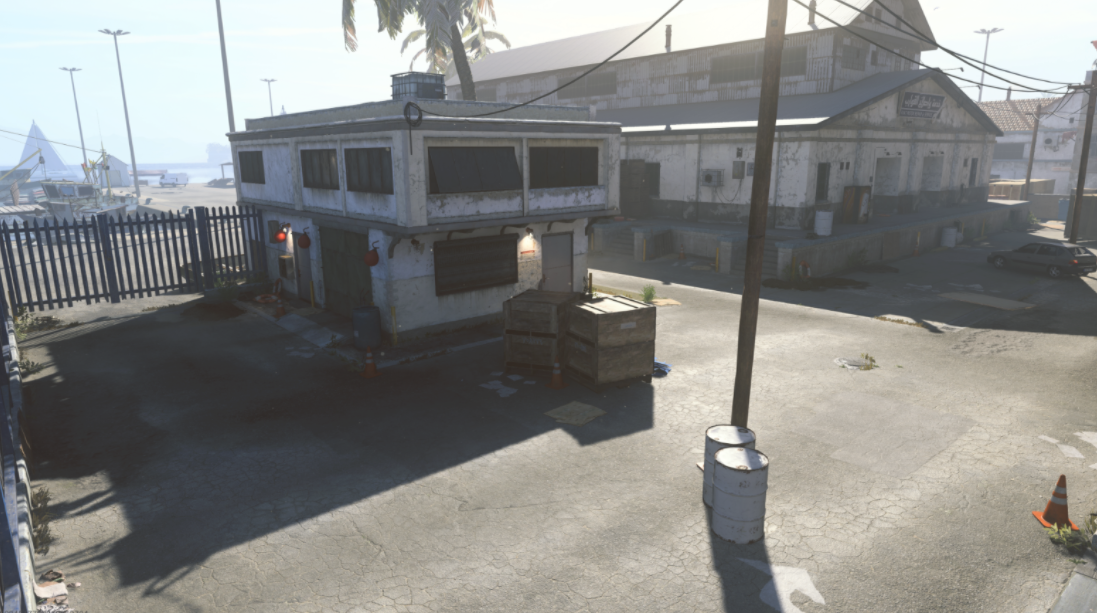 Towards the southern end of the map is the Cleaning Station. This empty room serves a minimal purpose in most game modes, but it is the second hill’s location in Hardpoint.

There are two entrances to the Cleaning Station on either side of the building. Only one player is needed to keep a Hardpoint active, so the rest of the team should set up around the building to prevent enemy advances. 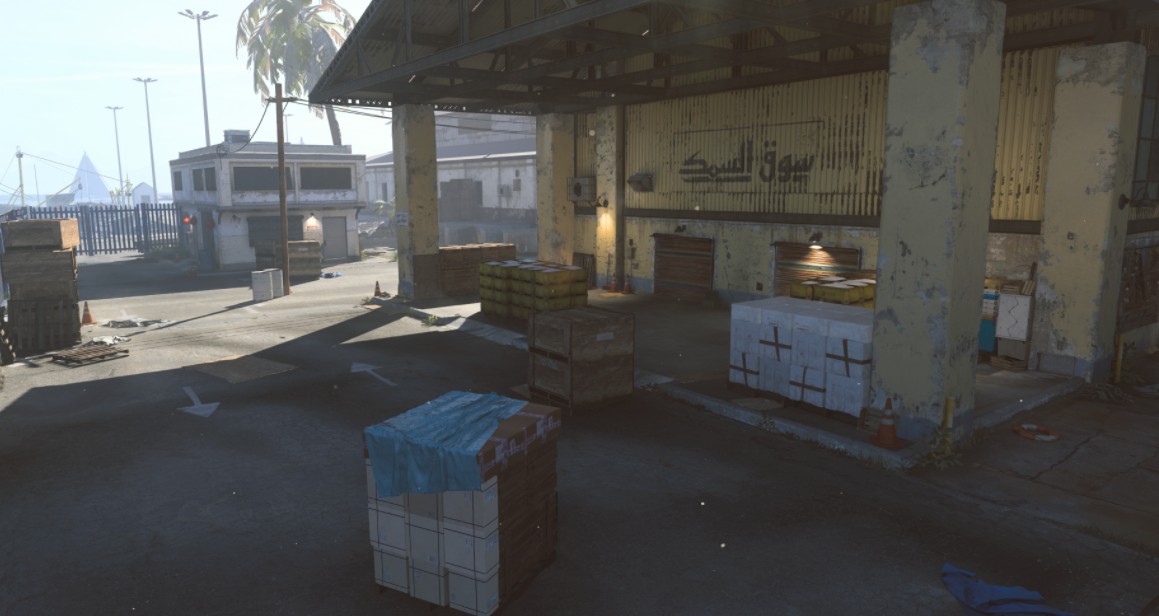 The Market Storage area in Suldal Harbor is a secluded section that sits between the Cleaning Station and Back Alley. This is not the focal point of any game mode, but it is an area lurkers and aggressive players often see.

The Back Alley connects to the Market Storage and is often used to flank enemies holding the southern part of the map. Players can cover the alley and open area in front of the Market from the Market Storage location if needed. Long-range weapons can also be used to cover the Courtyard and Apartment locations from this back area.

Suldal Harbor is a complicated and confusing map, but after a few matches, the layout becomes easier to navigate. Remember that this map will force you to play slower in some situations and outmaneuver the enemy, not just outgun them.