How to Play Sigrid in Rogue Company 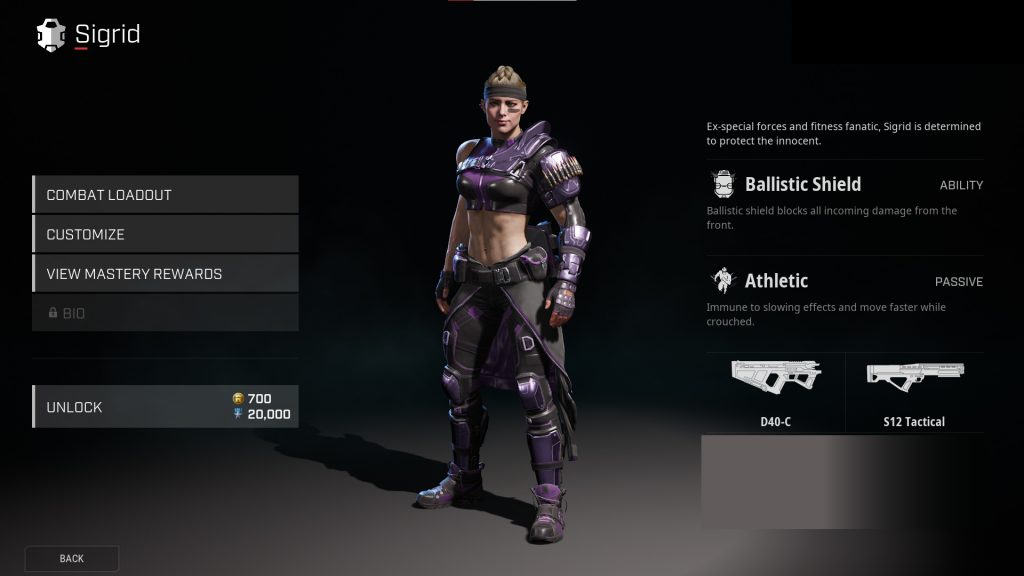 Sigrid is a breacher with a powerful ballistic shield. (Photo courtesy Hi-Rez Studios)

Sigrid is the latest Rogue to grace the tactical operations of Rogue Company. Sigrid is a breaching rogue from Norway, who has access to a very unique Ballistic Shield ability. When this shield is combined with her powerful short range weapons and deadly Semtex Grenade, Sigrid becomes one of the tankiest and most aggressive rogues in the game. Whether you are looking to breach sites on the attack or retake on defense, Sigrid is a great option for the aggressively minded player.

Sigrid’s active ability is her Ballistic Shield. Once activated, this shield will block all incoming damage from the front. Enemies will still be able to melee you and shoot you in the feet when your shield is active, however if you crouch, your shield will also cover your feet. While using the shield, you can only use your pistol. When you aim down sights with your pistol you will lower the shield, exposing you to damage.

If you want to be aggressive without exposing yourself to damage while using the shield, you can shield bash enemies using your melee key. The bash only does the standard 40 damage for melee attacks, but it’s still a useful trick in up close encounters. The Ballistic Shield lasts for 15 seconds at a time. However, it also has a very low cool down of only 25 seconds, so you are able to use this ability multiple times per round in many cases.

Sigrid’s passive ability is called Athletic. Drawing upon her love of fitness, Athletic makes her immune to slowing effect and move faster while she is crouched. Being immune to slowing effects is a huge boon for a breaching rogue like Sigrid, since it means that barbed wire and tear gas can’t slow her aggression. Moving faster while crouched goes well with her kit as well. You will find yourself crouching a lot when using her shield, to keep your feet safe from enemy attack, so it is nice that her crouch walk is a little bit faster.

Sigrid’s first option for primary weapon is the D40-C submachine gun. This high capacity short range weapon features a magazine which can hold up for 40 bullets, ensuring that you can deal plenty of damage before having to reload. This weapon has a pretty standard 2 second reload time, and deals 13 damage per hit to the body, which means it will take 8 shots to down an unarmored opponent.

Sigrid’s other option for primary weapon is the S12 Tactical Shotgun. This shotgun has the potential to deal 64 damage per shot, if you were to land every single pellet on the target. This weapon reloads a single shell at a time, and it takes .38 seconds to reload each shell. With a magazine size of six, you can reload from no ammo to full ammo in just over two seconds.

At Tier 1, this weapon’s magazine increases from 6 rounds to 10 rounds total. This is a significant upgrade to the weapon which should allow you to take on more than one opponent before needing to reload. The Tier 2 upgrade increases the hip fire accuracy on this weapon. Tier 3 directly upgrades this weapon’s damage at range by 20%. The D40-C is still the more versatile weapon, but for the devoted shotgun users out there, this is a solid gun.

The Warrant is a pistol that deals 20 damage per shot to the body, features a 15 round magazine, and has a reload time of 1.7 seconds. While it is semi automatic, it has one of the faster pistol firing rates in the game. When combined with Sigrid’s shield, the Warrant will easily win pistol rounds for your team. The gun remains a viable tool throughout the match too, partly because you can’t use your primary weapon with the shield, so if you have your shield out you will have to use this pistol.

Upgrading the warrant to Tier 1 will decrease its reload time to 1.25 seconds. The Tier 2 upgrade improves the damage at range and reduces the gun’s accuracy bloom, making your weapon’s effective range significantly longer. Although most pistols in the game aren’t worth upgrading, this weapon is an exception. The upgrades for the Warrant are well worth the investment and can pay dividends even late in a match. 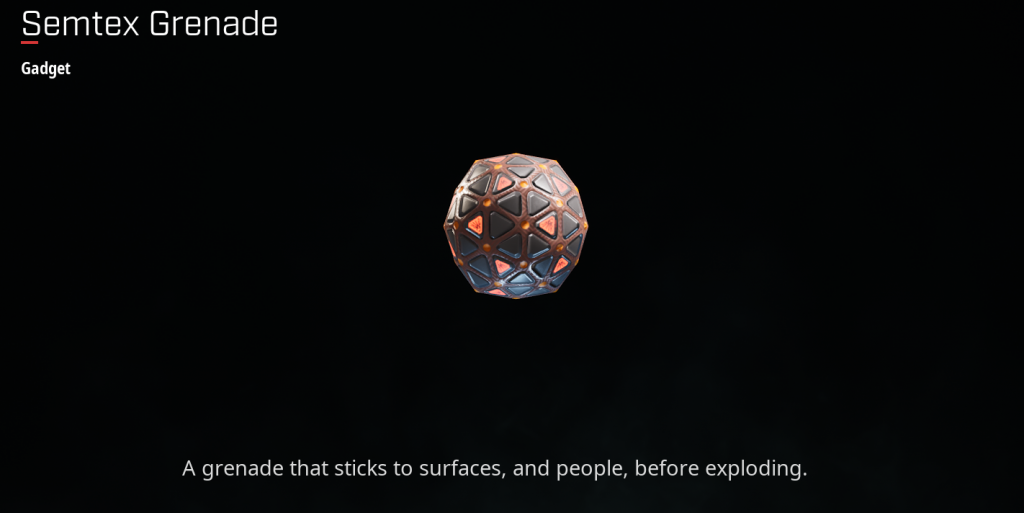 The Semtex grenade is one of the most powerful lethal grenades in all of Rogue Company. This explosive grenade can stick to surfaces or people. The ability to stick to various surfaces, combined with its relatively short fuse time, makes it a precise and tactical weapon which can be used to help your team in a myriad of ways.

When you upgrade the Semtex Grenade to Tier 1, it can be thrown faster and deals 250 damage to a stuck enemy. Upgrading it to Tier 2 increases the radius of its explosive damage. Both upgrades are worth investing in, since this grenade can be very effective for disrupting enemy pushes.

The adrenaline shot heals you for a small amount, and then instantly activates your health regeneration while increasing your overall movement speed. The effects of the shot last five seconds following its activation. When upgraded to Tier 1, the speed boost effect lasts longer. At Tier 2, you can carry two shots.

The ability to instantly heal yourself is powerful. If you are in a close gunfight, and both parties take damage, you can instantly heal to get the advantage over your wounded opponent. Alternatively, you could use the Adrenaline Shot to disengage from an unfavorable encounter quickly. You can also use the Adrenaline Shot to restore health that was blocked by Vy’s poison pool. There are so many situations where this shot is useful, so you should definitely be buying this gadget.

Sigrid has access to many of the best perks in the game for playing aggressively. Considering her strengths and role on the team, Tenacity is one of the best options for her. Tenacity lets you take reduced damage from explosives. As a shielded breacher, Sigrid is the target of a lot of explosive weapons, since many traditional weapons can’t pierce her shield. Tenacity can help mitigate the impact of damage from those explosives.

The other big perk that helps supercharge Sigrid’s shield is Lifeline. Lifeline lets you revive enemies faster, and when they are revived their health regeneration starts immediately. Sigrid’s shield lets her revive teammates in relative safety, even when they are in an exposed spot. The Lifeline perk will help you do that even better.

This buy order kicks off with a relatively risky $4,000 purchase of the semtex grenade. The semtex can deal massive damage, especially in the first round when enemies aren’t as well equipped yet. If you lose that pistol round, however, you will not be able to afford your primary weapon in the second round. This is fine though, since a lot of Sigrid’s impact comes from when she is using her shield, and her shield only allows you to use the pistol anyway. If you can’t afford you primary weapon, spend some of that money upgrading your pistol instead, since the pistol with the shield is still a very deadly combination.

In the second and third rounds, invest in your primary weapon and pick up the Adrenaline Shot gadget. Going into the third round, you should already be fully equipped and ready to slay. After that you can go ahead and pick up your essential perks and finish upgrading your equipment.

Sigrid is a very effective breacher who plays a very supportive role on the team. Her shield can obviously be used to aggressively push a choke, or win a close quarters combat engagement, but it can also be used to revive fallen teammates or cover flanks for your teammates while they plant or defuse a bomb. Considering how powerful Sigrid’s shield is, using it in the right situations can make a big difference for your team. Be sure not to throw it away, and only use the ability when you have a clear plan for it.

You don’t have to buy a primary weapon with Sigrid, if you don’t want to. The Warrant pistol is a very capable secondary, and you can’t use your primary weapon with her ballistic shield anyway. When the Warrant is upgraded, it can hold its own at short and moderate ranges, especially when combined with the strategic use of her ballistic shield. By forgoing the many thousands of dollars that you could spend buying and upgrading a primary weapon, you can instead spend that money on her gadgets and perks which can be crucial to supporting your team. This build isn’t necessarily the best option for Sigrid, but it’s surprisingly effective and a very fun way to play the game if you enjoy using pistols.