How to Play Scrapyard 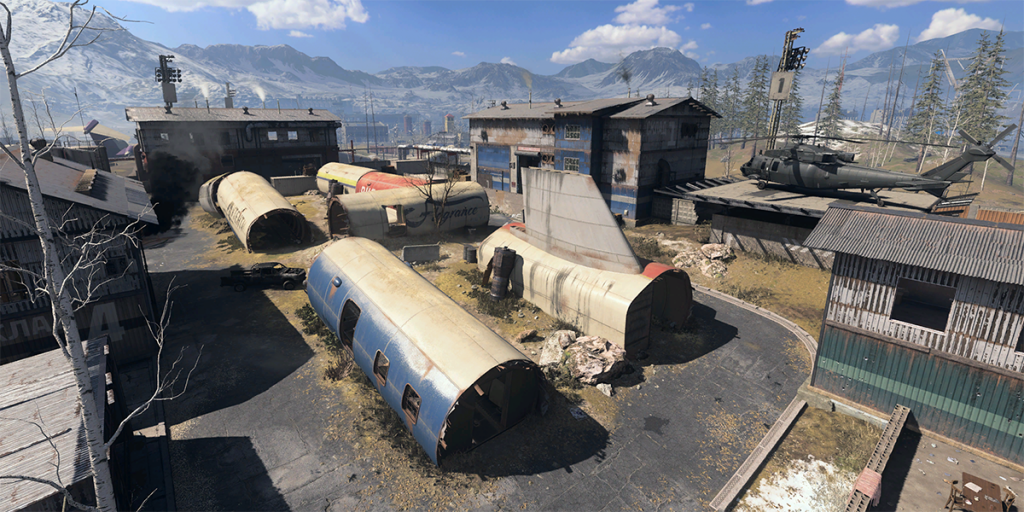 Scrapyard was first featured in Call of Duty: Modern Warfare 2 and immediately became a fan favorite. Here’s a breakdown of Scrapyard.

Call of Duty: Modern Warfare’s season four has brought back Scrapyard, one of the most iconic multiplayer maps in Call of Duty History.

Scrapyard was first featured in Call of Duty: Modern Warfare 2 and immediately became a fan favorite. The map was originally reimagined and integrated into the Warzone map as part of the Zhokov Boneyard, but fans clearly wanted a return of the multiplayer map. Players can once again experience the frantic gameplay has to offer.

Here’s a breakdown of Scrapyard and everything you need to know to dominate the enemy.

Scrapyard is a medium sized, three lane map with warehouses and destroyed planes scattered around the map. There are two warehouses on both ends on the map that provide vantage points for snipers or a safe space for players to hide when calling in killstreaks.

There are also two warehouses on the east and west sides of the map that also provide lines of sight through the middle lane and a place to cover enemy advances. The middle of the map consists of four hollow planes that players can enter which provide cover. There are also two open routes players can take around the planes, but these are usually a riskier option. Most play styles can be effective in each of these areas, but players should know what to expect before pushing the various spots on the map.

There are four warehouses in Scrapyard that provide lines of sights and are the locations of objectives in some game modes. 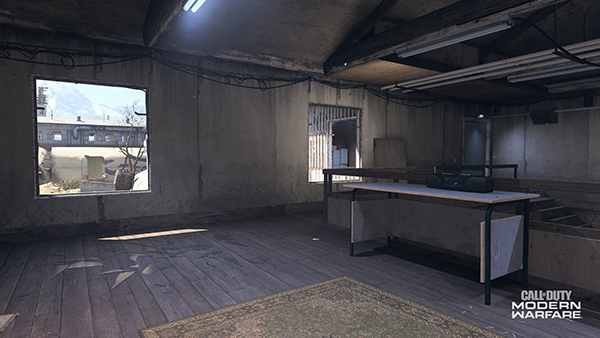 The Green Warehouse on the south end of the map is a two-story building with several entrances and windows. The first floor does not offer any amazing vantage points of the map, but it can be used to cover the A flag in Domination or various objectives in Hardpoint and Cyber Attack.

The second floor of the building has several windows that are perfect for snipers to cover the middle lanes and protect their teammates. It also has a clear view of the Red Warehouse on the opposite end of the map, so be mindful of enemy snipers on the hunt. 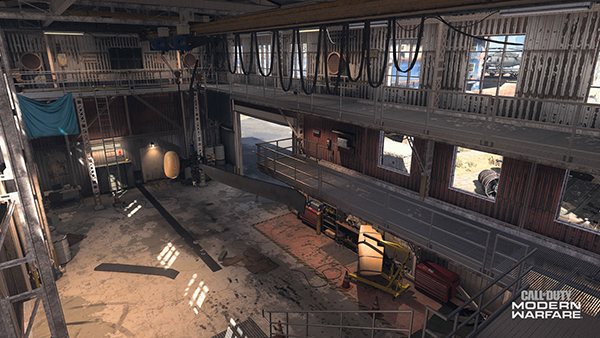 The Red Warehouse is on the north end of the map and is a wide-open building with little cover. The first floor of the building does not hold much strategic importance in most game modes, but it is the location of a Hardpoint and is near the B bomb in Search and Destroy.

The second and third floors of the Red Warehouse are where players will encounter most enemies hiding with long-range weapons. The second floor is accessible by a staircase inside the building and provides a decent view of the immediate area. Players must climb to the third floor to get a birds eye view, however, which is often risky.

The third story is only accessible from a ladder inside the warehouse which leaves players vulnerable for a short period. Players who make it to the top will have a clear view of most of the map and can be a deadly force. 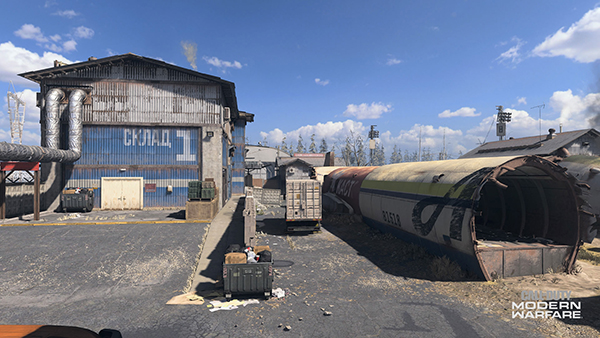 The large Blue Warehouse on the East side of Scrapyard is one of the most contested locations on the map. Every objective-based game mode has at least one objective in this building, so be prepared to be constantly pushing or defending this location. There are two entrances on either side of the warehouse that are blocked by doors which provide an audio cue when opened. There are also two entrances to the middle lane that are used by players navigating the middle lane.

This warehouse is difficult to hold single-handedly and usually requires multiple players covering the entrances.

The Brown Warehouse on the west side of the map provides lines of sight into the middle lane and is the centerpoint of the left lane. Most players do not spend a lot of time in this location, but some enemies will sit here to cover the middle lane. 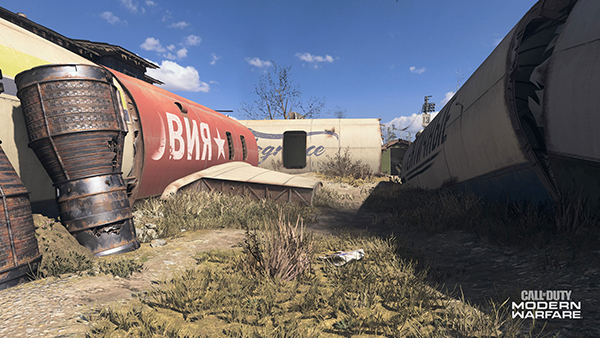 There are four destroyed planes that form the center of Scrapyard. These planes provide cover for players navigating the middle lane and are notorious for close quarter engagements. A talented plan can hold a plane with a long range weapon, however, just be careful not to get flanked.

The two smaller destroyed planes sit directly outside of the Green Warehouse and in between the helicopter pad and stone building near the Brown Warehouse. Players can use these two smaller planes as cover when moving to the other end of the map or as a place to cover rotating enemies.

The blue destroyed planes have a few windows that provide a view of the immediate area but are not the best lines of sight. Players should consider using the red warehouse to cover the area and the two destroyed planes as quick cover when on the move.

The other destroyed planes from a U shape in front of the Red Warehouse and are important areas to hold. The L shaped plane has one entrance towards the center of the map that players are constantly using. A single player can cover this entrance and halt an enemies advancement through the area. There are also windows in the plane that face the Blue Warehouse which are useful when covering various objectives.

It is possible to get on top of the L shaped plane by jumping on the truck next to it, but it will take a little practice to figure it out.

The smaller plane on the opposite side of the L shaped plane is partially broken and raised in the middle. This creates cover for a crouching player who can fire into the middle lane while protected. The raised area also creates a small line of sight into the Brown Warehouse which can be used to eliminate players trying to flank towards spawn.

These planes make up the bulk of the center map, but there are two smaller lanes that run on either side that are just as important.

Most players consider the planes and warehouses on the sides of the map as the “three lanes”. There are technically two smaller lanes in the middle of the map that are just as important and are heavily used.

The western lane is useful for players trying to flank enemies on the northern end of the map as it has a lot of cover. The fuseulages are on fire and blanket the area in black smoke which players can use to cover their advancement. Players defending the area can go prone and see enemies feet and stop them in their tracks.

The eastern lane goes directly past the Blue Warehouse and can be used to avoid the middle lane of destroyed planes. There is a decent amount of cover throughout the lane until players reach the green warehouse. This lane is best used to move in and out of the outer and middle lanes to avoid enemies or surprise them. Running directly through either lane is very risky and not recommended. 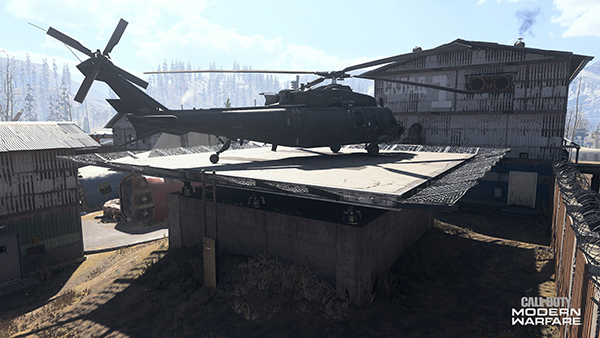 The last two major parts of Scrapyard are the Helicopter pad and fuselages. We’ve briefly touched on the fuselages already, but it is important to fully understand what these areas have to offer.

This area is constantly used by players moving between warehouses and is a hotspot for claymores or camping players. Double check for these things before blindly rushing the area.

The Fuselages are in between the Small Warehouse and the Red Warehouse. The area is covered in black smoke as a truck is on fire which provides a decent amount of cover. The area behind the Fuselages have some cover but do not have the provide any strategic values to players in most game modes.

The final two corners of the map between the Red and Blue Warehouses and the Brown and Green Warehouses are areas most players overlook. The top right corner of the map has a truck players can use as cover when watching Blue Warehouse, but it is rendered useless by a solid flank or if someone closes the Blue Warehouse doors.

The bottom left corner only features a narrow passage that connects the Green and Brown Warehouse and not much else. This area is especially important to navigate quickly as it is easy to be killed in the very tight space.

Now that you know the lay of the land, here are a few things you need to remember.

Most of Scrapyard is outside which makes aerial killstreaks incredibly powerful. The warehouses are usually a contested space, so be careful when running into a building when trying to find cover.

The Red and Green warehouses may provide vantage points for snipers, but they are easily countered by a coordinated attack. Players can lob grenades or other equipment into the windows to eliminate or distract the enemies. If you are a sniper don’t forget to use equipment such as claymores to help defend your position.

Scrapyard is a fan favorite for a reason; it provides intense gameplay that will keep you coming back for more. Use your map knowledge to dominate the enemy and help your team secure a victory.