How To Play Mid Lane In League of Legends 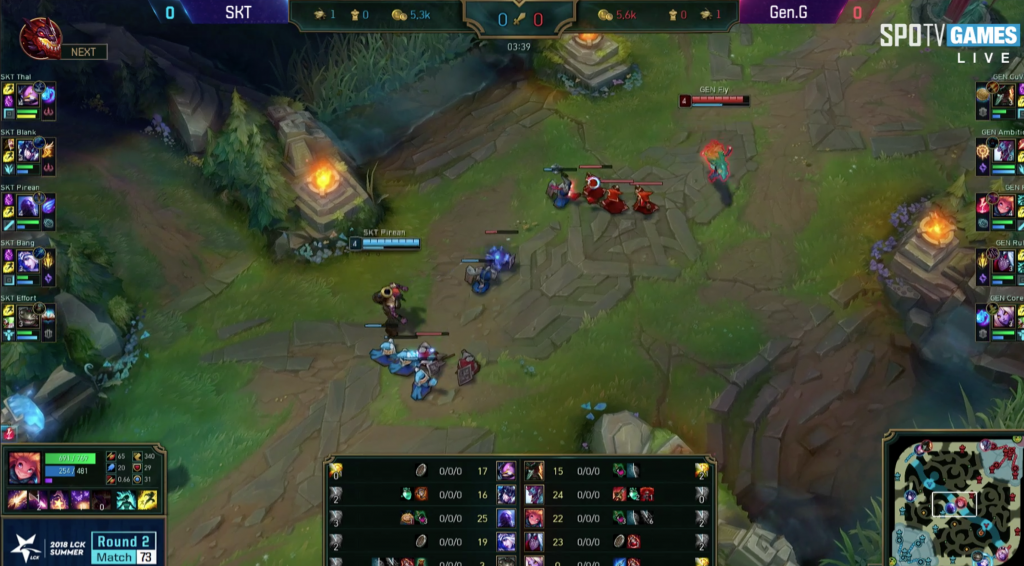 Mid lane has been the most popular role since the inception of League of Legends. It is known for its high map impact and heavy damage playstyle. What follows is everything you need to know to start dominating your games as a mid laner.

Mages and assassins make up the majority of the mid lane champion pool. The short lane allows for mages to farm safely despite generally being limited in terms of mobility. Assassins are picked for their ability to quickly burst out enemy laners in the short lane. Both mages and assassins also thrive off roaming, making mid lane ideal for its central location on the map.

Summoner spell choices can be varied in mid lane. Aggressive laners will choose Flash and Ignite for the kill pressure. More passive laners will take Flash and any of Barrier, Exhaust, Teleport, Heal, or Cleanse. These choices are matchup and team composition specific. Barrier, Exhaust, and Heal are great for fighting burst champions. Teleport is taken in a lane where you expect to get harassed in lane and need to recall often. Cleanse is ideal if the enemy mid laner and jungler have multiple forms of crowd control.

In addition to auto attacks, champion spells are the second form of damage trading in lane. The three pieces of information you must keep track of for spells are range, cooldown, and whether or not the spells pass through minions.

Despite being the shortest lane in the game, mid lane can be attacked from all directions due to its central map location. This makes understanding how and when to ward very important in lane.

Unlike top or bot lane, there is no obvious early timing to put down a Warding Totem in preparation for an enemy gank. This is because junglers tend to either end up on the top or bot sides of the map after their initial jungle clear. Junglers pathing to mid-early can and does happen, but that is atypical and harder to predict.

When you do put a Warding Totem down early, you can only cover one of your top and bot sides. Although it does not give vision of both sides, the information revealed can be useful enough to feel safe in lane. Playing to the side of the lane your ward is on allows you to avoid the dark area of the map. For example, warding the top side mid brush allows you to play on the top side of mid lane and avoid the unwarded bot side mid brush altogether.

As the game progresses, more Warding Totem charges will be stored and you will be able to place a ward on each side of the lane for more coverage. Vision Wards can and should also be purchased to supplement your vision. Vision Wards should be placed inside brushes closest to your turret so you are better able to defend them from an enemy attempting to destroy them. Vision Wards on your side of the map also allow your jungler to feel safe ganking your lane undetected.

It is harder to freeze a minion wave mid than it is in top or bot lane. The wave crashes into the turret faster because the lane is shorter, making it functionally harder to freeze. The short nature of the lane also makes it less dangerous to walk up to a frozen minion wave because it is a shorter distance back to your own turret.

This makes pushing the minion wave almost always the optimal strategy as a mid laner. The most obvious benefit of pushing a wave is forcing it to crash into the enemy tower to make the enemy mid laner stay in lane or miss that experience and gold. Pushing the wave also gives you priority on the map because you are able to move more quickly than the laner who is still forced to deal with a minion wave. The enemy mid laner must choose to either be late moving on the map or give up experience, gold, and damage to their turret by ignoring the minion wave.

Flash should be taken on almost every mid laner. It can be used both offensively and defensively. You should be using your Flash in lane only if it is needed to secure a kill or to prevent your own death.

Ignite is the offensive summoner spell choice for mid lane. It is effective on mid laners because they tend to be very burst heavy champions. Ignite is ideal for adding to the burst damage total to catch out an enemy in one spell combination.

Teleport can be taken mid lane in a poor matchup. It allows you to get in an early recall to base without missing minion gold or experience. Champions that get bullied early are also generally good late game scalers, so Teleport comes in handy for farming sidewaves and re-joining the team later in the game.

Barrier, Cleanse, Heal, and Exhaust are all good defensive spell options. Barrier should be used when an enemy champion is using a spell rotation that threatens your life. It should not necessarily be used only at the last moment. Instead, use it to absorb as much damage as you can. The shield is not permanent so you do not gain any health when Barrier expires.

Heal is useful as a defensive spell against an enemy champion you do not expect to take Ignite. If an enemy does have Ignite, you must try to Heal before the enemy can Ignite you. While Ignited, the healing effect is halved. Heal is a permanent health gain, so you can use it late in a fight to bait an enemy. The movespeed from Heal also can allow you to escape situations without having to use your Flash.

Exhaust works like Barrier in that you try to use it when the enemy is using their burst. Unlike Barrier, Exhaust also has offensive uses. Exhausting an enemy can allow you and your teammates to chase an enemy down due to the movement speed slow.

Roaming is very impactful for a mid laner because it is the center lane on the map. You are always a threat to help out top or bot lane. Mid laners are also usually the closest to their jungler, and as such can make plays on the map together.

It is important to first tend to your minion wave before you roam. Ideally, you will get the minion wave pushed into the enemy turret and then look to roam. You can still roam if you clear the minion wave after the enemy mid clears theirs, but you will have lost tempo on your map movement.

You also need to be aware of the situation on the map you are moving toward. Your allies should have enough health and mana to support you in your gank. It is also helpful if your allies can communicate to you what summoner spells the enemies still have available.

You must be sure that you have a safe path to the lane you want to roam on. The enemy jungler can block your path if you do not have sufficient wards or information on the junglers whereabouts.

Mid lane allows you to experiment with champions that are weak earlier in the game. Try out some champions like Veigar and Kassadin that scale well as the game progresses.

Make sure you track the enemy jungler as best you can before going for trades in lane. With so many points of entry to the lane, the jungler could show up in a bad spot if you get too aggressive without vision.

River vision is especially important for mid laners. You are the most likely to need to help your jungler if he gets in trouble. River vision is also crucial to making safe roams. Placing a Vision Ward in top or bot river brush is always a valuable location.

Shoving the minion wave is a great way to help your jungler. With priority on the map, you can walk with him to invade the enemy jungle. There you two can look to pick off the enemy jungler or put down wards to track his movements.

Heal can be a great summoner spell choice if you plan on making a lot of plays with your jungler. The secondary portion of the heal effect can give you a boost in a 2v2 or 2v1 situation.

Make sure when you roam that it is likely you can catch out the enemy laners. You want your allies to have crowd control or for the enemy to be overextended in their lane. There is no point to roam to an enemy laner that is full health under their own turret.