How to Play Loba 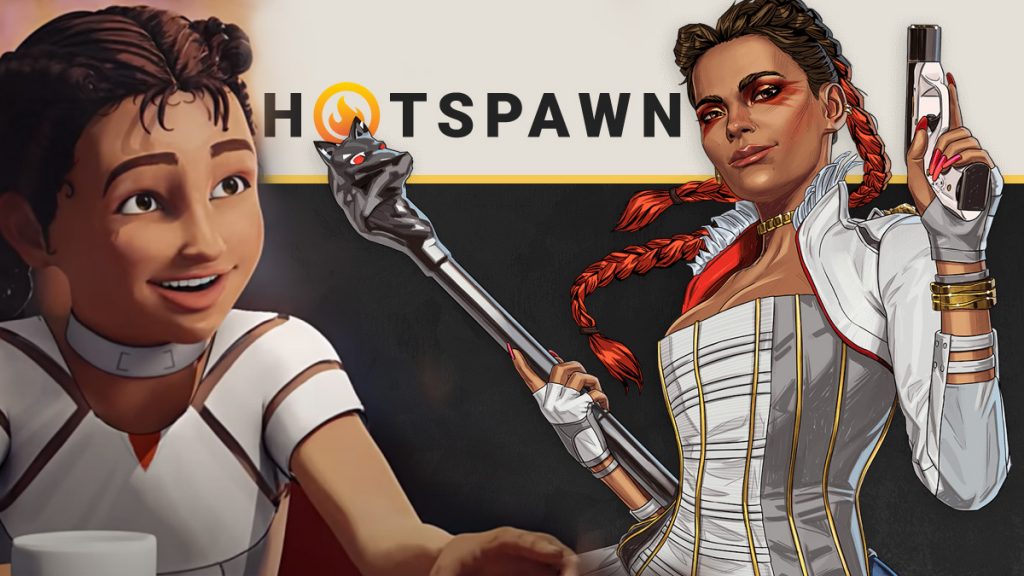 Loba is the latest Legend to hit Apex with the release of Season Five.

Loba Andrade is a translocating rogue or as EA calls her a “high society thief”. She is the newest legend to enter Apex Legends, coming as part of Season Five’s Fortune’s Favor.

Who is she? Well Loba is an incredibly mobile legend that can swiftly traverse large distances and locate high-tier loot for your team to come out on top in early encounters.  While none of Loba’s abilities deal damage they are game-changing, and even if you do not plan to play Loba, this guide will still ensure you know what to expect from the fresh new face in Apex Legends.

Nine-year old Loba could be seen in the Season 4 Assimilation Trailer.

Loba’s backstory is that she is the orphan whose parents were viciously slain by the Synthetic Nightmare known as Revenant. The incident was shown in the Launch trailer for Apex Legends Season Four which introduced hitman Revenant as the newest legend, and following the loss of her parents, Loba resorted to petty crime. Loba’s skills progressed and after getting her hands on Jump Drive tech, she created a teleportation bracelet she’s used to build a reputation as a master thief. Now equipped for justice, she is on the hunt for Revenant. 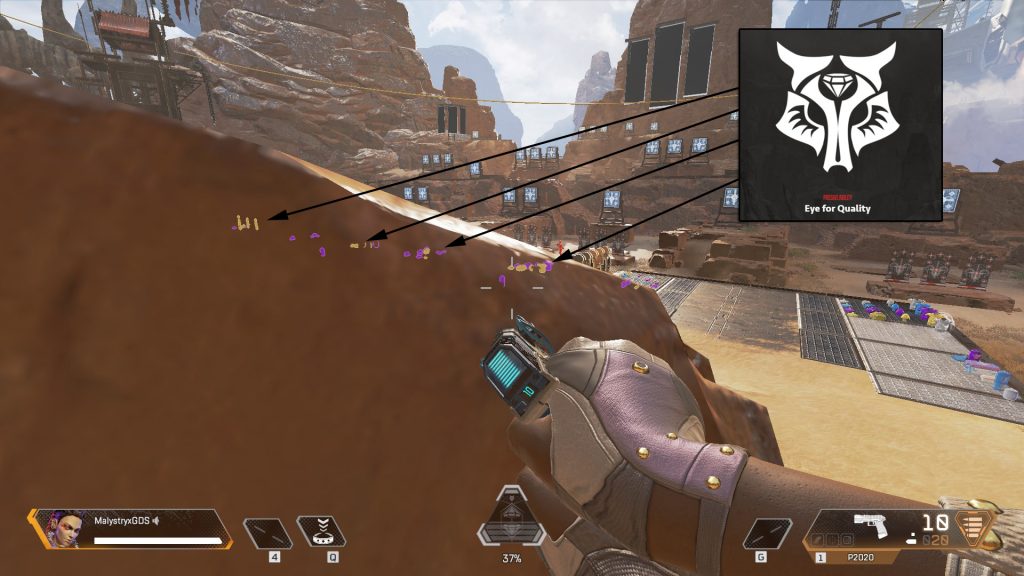 Loba’s passive ability is called Eye for Quality, and it grants her the ability to see Epic (purple), Legendary (gold) and Red loot through walls, obstacles and inside supply bins. It can also locate Treasure Packs, which are part of Season Five’s Broken Ghost quest.

Eye for Quality has a range of 78 meters, the same as Loba’s Ultimate, meaning you will be able to see those items from a great distance away. While the ability is self-explanatory, keep in mind that only you can see where the items are, your teammates can not. So try to get into the habit of pinging out high-tier gear even after you’re fully kitted out to give your team an edge.

Burglar’s Best Friend is Loba’s tactical ability, and defines the character’s playstyle. When casting the ability, Loba will remove the Jump Drive Bracelet from her wrist and players can throw it in a predictable path similar to a grenade. Loba will then teleport to wherever the bracelet lands. To decide the flight path of the bracelet hold down the ability key when activating it.  Sounds simple enough but this is a guide after all, so we’re here to tell you more than what it says on the tin. 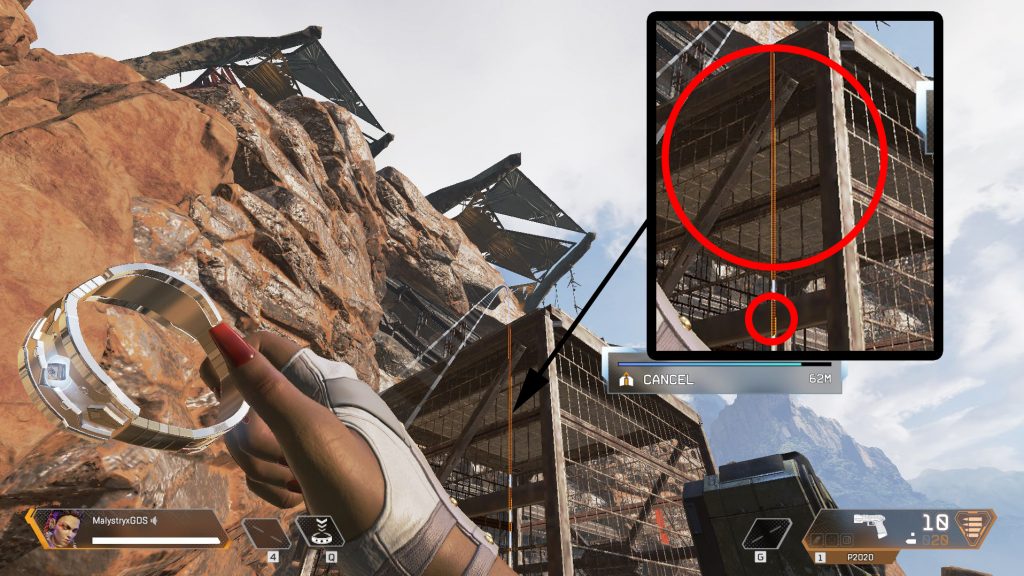 While the bracelet is mid-air you can actually choose to land the bracelet before it reaches its end location. If you do so it will drop straight down. The path of the bracelet will be visible to you, and if, for example, you’re throwing it over an obstacle, the period it is directly over that obstacle is marked in orange. This means you do not need to perfectly line up the landing spot like you would with a grenade, simply fling the bracelet in the general direction you wish to go and then cancel early.

If you’re looking to reposition onto a very small surface you will need to react quickly to the orange visual cue, so it might be worth a trip to the firing range to practice. Also be aware that the further the bracelet travels, the longer it will take you to teleport there. 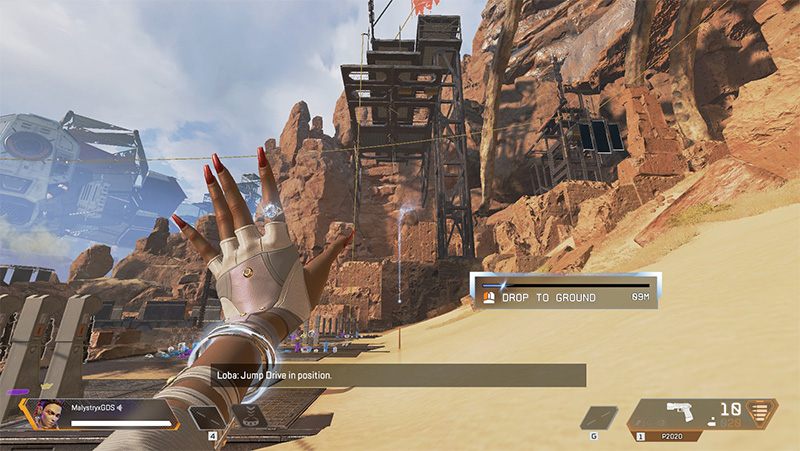 After throwing the bracelet you can choose to left click to “drop to ground” early.

Burglar’s Best Friend can be thrown through windows, allowing you to enter occupied buildings, or thrown in mid-air while falling for a zipwire. If you’re under fire in open space, use Burglar’s Best Friend to reposition or heal. Once the bracelet is in the air you are free to move around, and it will not affect its trajectory, so don’t stand still waiting. You are still able to run for cover, loot or close and open doors.  The cooldown on the ability is 30 seconds, which interestingly in Season Five is actually better than Pathfinder’s Grappling Hook which now has a cooldown of 35 seconds up from 15.

That said, here are a handful of crucial tips to ensure you use Burglar’s Best Friend effectively. The most important tip is to remember that Loba holsters her weapon during the tactical ability, meaning you are defence-less for the entire duration, even while it is in mid-air. On top of that when you teleport to the new location, Loba takes around two seconds to wear her bracelet and take out her weapon. 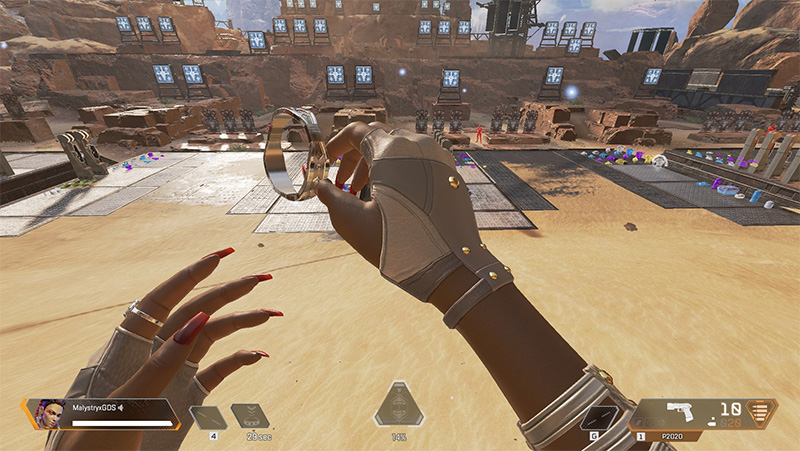 After teleporting Loba takes around 2 seconds to wear the bracelet and redraw her weapon.

As a result, Burglar’s Best Friend needs to be used with caution, and you should seek cover while she redraws her weapon, before engaging the enemy. Lastly while the  bracelet can let you travel 87 metres at max, once it is thrown the ability can not be cancelled. So, check with your allies to make sure they’re on board to flee before you activate it!

Loba’s Ultimate is called Black Market Boutique. Once it is used, Loba will plant her staff in the ground and the portable device attached to it will create a mini-shop, which you and your allies can take up to two items from. The twist is that the contents of the shop is actually all the weapons and items in a 78 meter radius, which will hover off the ground for the duration of the Ultimate. Legendary items and items in death boxes are also included in the Black Market Boutique. Once a player chooses an item, that item will then teleport from its location into your inventory, leaving a faint teleport trail visible to all players. 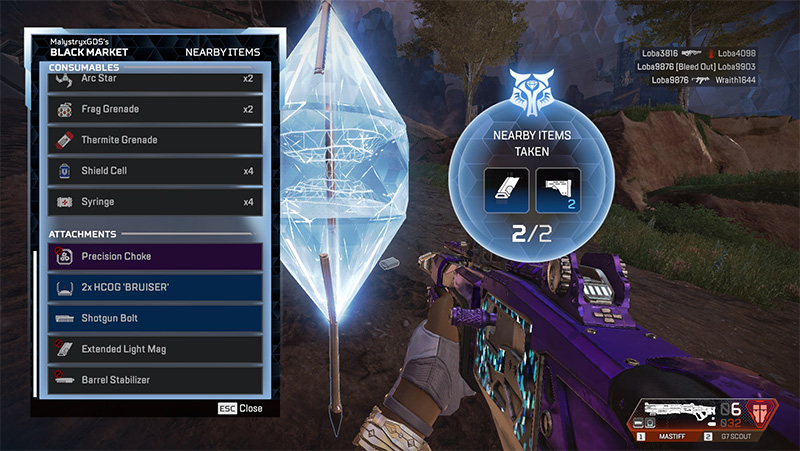 Each player can choose up to 2 items/weapons from the Black Market Boutique.

The cooldown of Black Market Boutique is 175 seconds, which is  just a bit faster than Bloodhound, Gibraltar, Wattson and Crypto’s Ultimates (180 seconds). It will feel faster however, as you will generally use it immediately as it’s not dependent on being near enemies. 175 seconds is usually the time it takes for you to travel from one location to another, meaning you can set up another shop, kit up and then move onwards towards the circle. Once placed, Black Market Boutique takes 4.5 seconds before it can be accessed.

Black Market Boutique is incredibly useful in the early game for getting your gear up to scratch, and even more useful in the end game to get your hands on more ammo. Once you and your party have finished using it, remember to press the “H” key to collapse it, otherwise enemy players who stumble upon it while it is active can also use it. Yes that’s right, enemy players can use your Ultimate. Black Market Boutique has 100 health and can be destroyed, so if you see an enemy team setting one up, you can also shut it down if you so wish.

Loba’s Ultimate is perfect for avoiding third party situations, where you’ve downed a team and need to loot but given no time to do so. Instead of standing in open space, simply head to the nearest building or reposition in cover, drop your ultimate and then shop in peace and quiet.

While Loba does grant mobility you will need to rein in the YOLO mentality when launching your Burglar’s Best Friend, to avoid simply being a dead friend. There’s no harm in spending 5-10 minutes practicing how to land the perfect bracelet before jumping into a game.  Remember to ping Eye for Quality items scouted to your allies, and don’t be afraid to use Black Market Boutique not only for weapons but also for ammo. It’s going to take some time for you to get the most out of Loba, but it’ll be worth it.