How to Play Factory 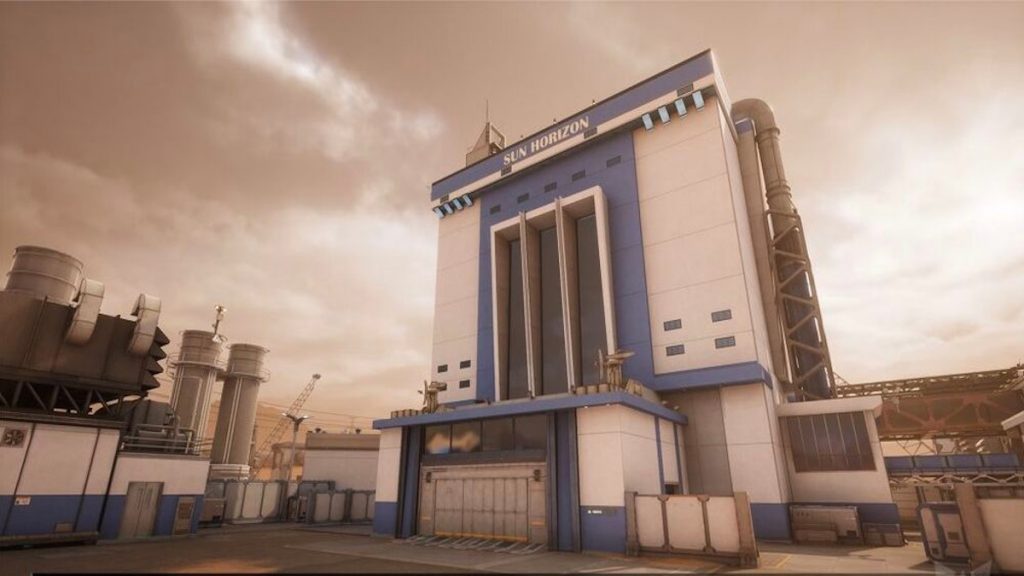 Factory is a unique twist on Rogue Company maps, filled with long-range firefights and gauntlets, with a unique spin on mid control. (Photo courtesy Hi-Rez Studio)

Rogue Company’s Factory is a map that is relatively large yet is rather simple in its nature. There are two large sites to attack and defend, with many of the avenues getting there resulting in some chaotic fights at specific locations. Here are some of the best tips to get the most out of Factory on the Demolition game mode. 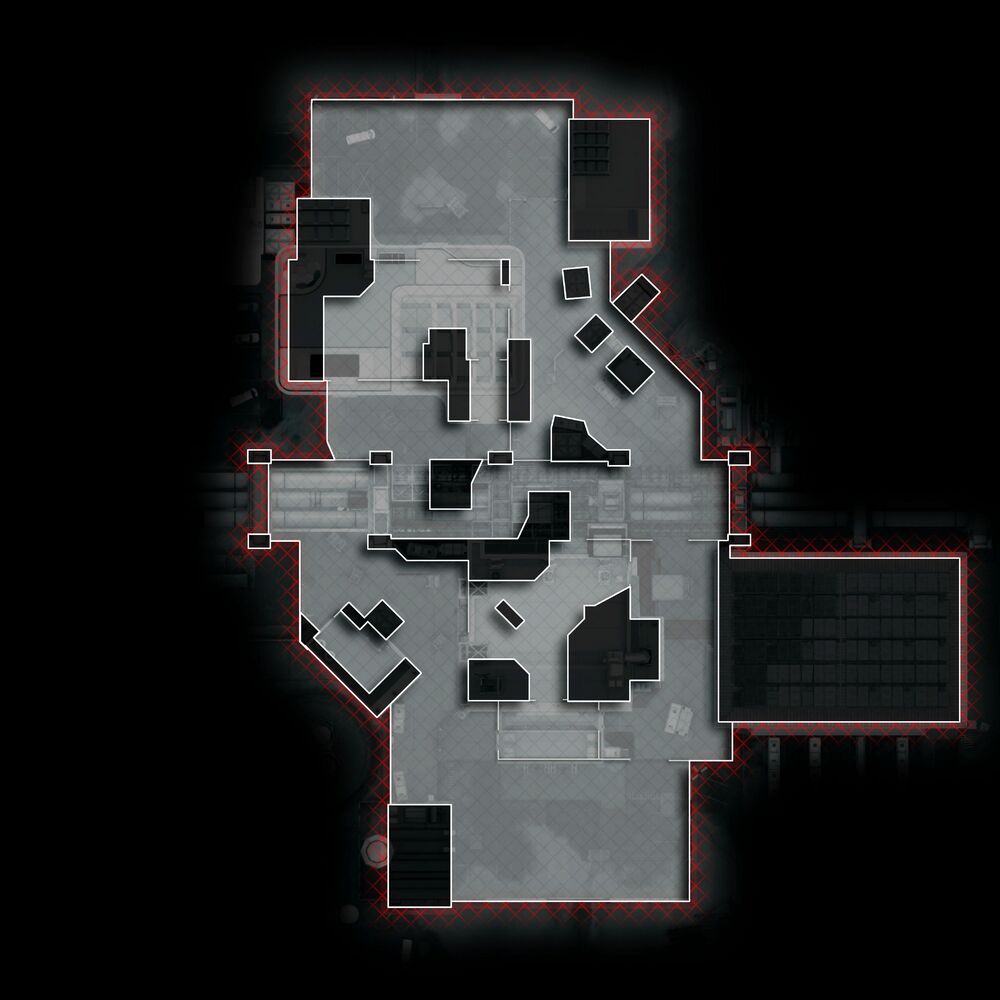 Factory is a straightforward map despite how large and chunky it is. On the south side of the image above, the attackers spawn in. They then have two option, one is to push the left side of the map to get to A, while the other is to go right to get B.  The thing about both sites is that there is quite a lot of open terrain, and plenty of half walls, vehicles, and more to use as cover to make it from one end of open ground to another. Because of this design, guns with strong range are typically favoured for the mid and B sites, which also applies to the vast majority of A.

As for the middle of the map, this is essentially a neutral mid that both teams need to be wary of. On other maps, Mid tends to have one side that belongs to one team, while another team has the other half. On Factory, mid is horizontal, meaning that both teams must deliberately head into it if they want to control it. 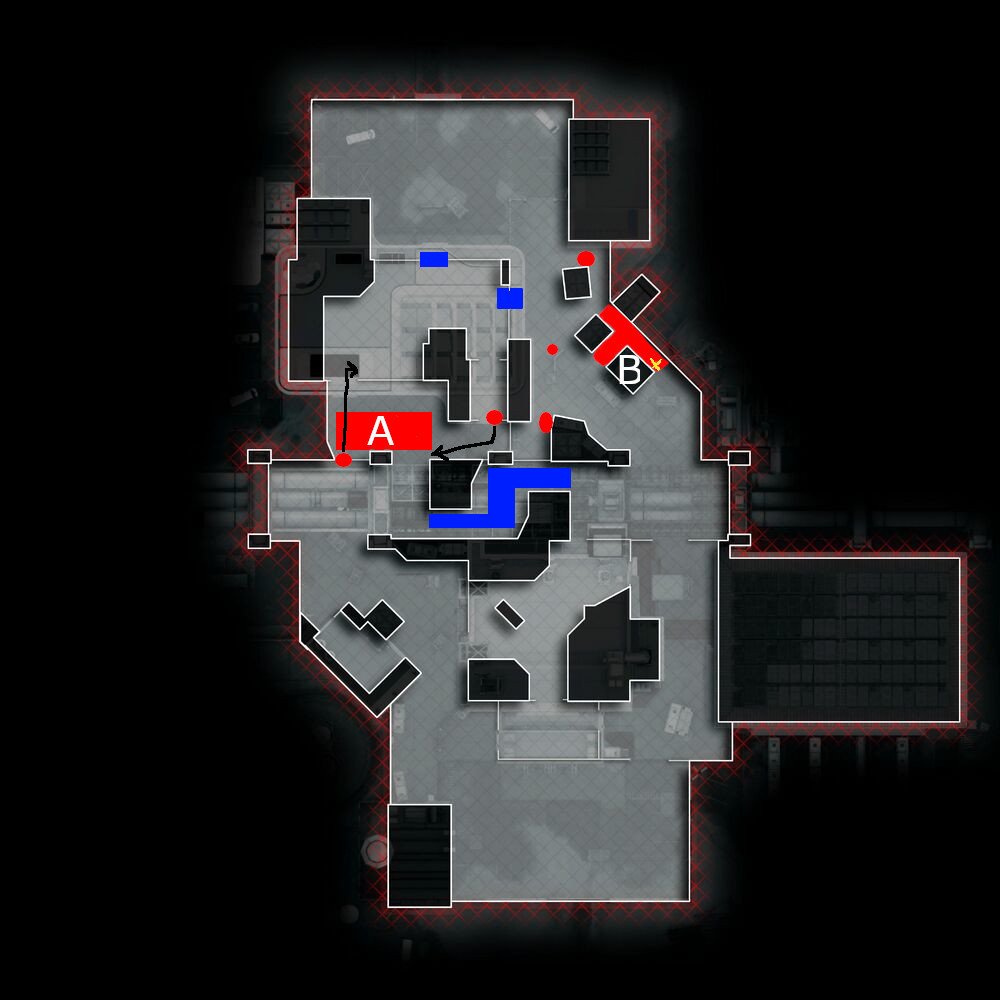 The Defense Side have quite the task to defend both sites. B site requires longer range fights to occur for either side to gain an advantage. The defense has several barricades lined up that give them strong angles on the crossing from Attacking side of the map to defending side of the map. Also, they have big boxes and containers to hide behind, meaning they can play tighter angles and climb on top of containers if they want to surprise any attackers that crossed the gauntlet onto the planting zone.

Furthermore, B has a nice Cubby zone. This can be very good for characters like Saint, who can safely revive their allies that get downed. The bonus of this spot is he still has a range advantage to fight with his assault rifle and surprise any aggressive attackers that expose themselves.

Over on A Site, the planting zone is much more CQB. Defenders can still create a gauntlet experience, but they must deliberately position themselves on the boosted wall to create it. It is crucial to have a player on the wall to fight off anyone daring to cross, or to at least relay information that a push to A is happening. If that player finds an attacker challenging the wall, then they can fall back into the Defender’s Spawn Factory building and await help.

An example of the A wall boost is seen above.

The other defender spot to play from on A site is the side entrance into Defender’s Spawn Factory. This route as a limited angle to contest players running the gauntlet, but it protects A Main from assault. This defender will likely be a player that has good SMG or shotgun because of its small range. Anyone that plays this spot can also play a lurker style and surprise enemies by only contesting after they pass. This can create an element of surprise, especially if they are the only player defending this site.

If either site capitulates, then the defence has quite a few ways to rotate. The image above has blue annotations, meaning these are the potential ways to rotate from one site to another. The safer rotations are the two Defender Factory locations, while the high-risk high reward rotation is through Mid.

The Defender side rotations allow players to approach an A side retake through the two natural paths to A site. Moving from A to B means players can take the much safer route to Defender spawn while the other means jumping through a window and taking cover behind barricades.

The mid-rotation is the most rewarding as it will naturally take you to the Attackers’ flank. However, the Attacking side should have a player watching this angle to prevent a flank from occurring, if the Attackers have the numbers to support that strategy. If a defender succeeds here, then attackers will struggle to defend in the post-plant scenario. 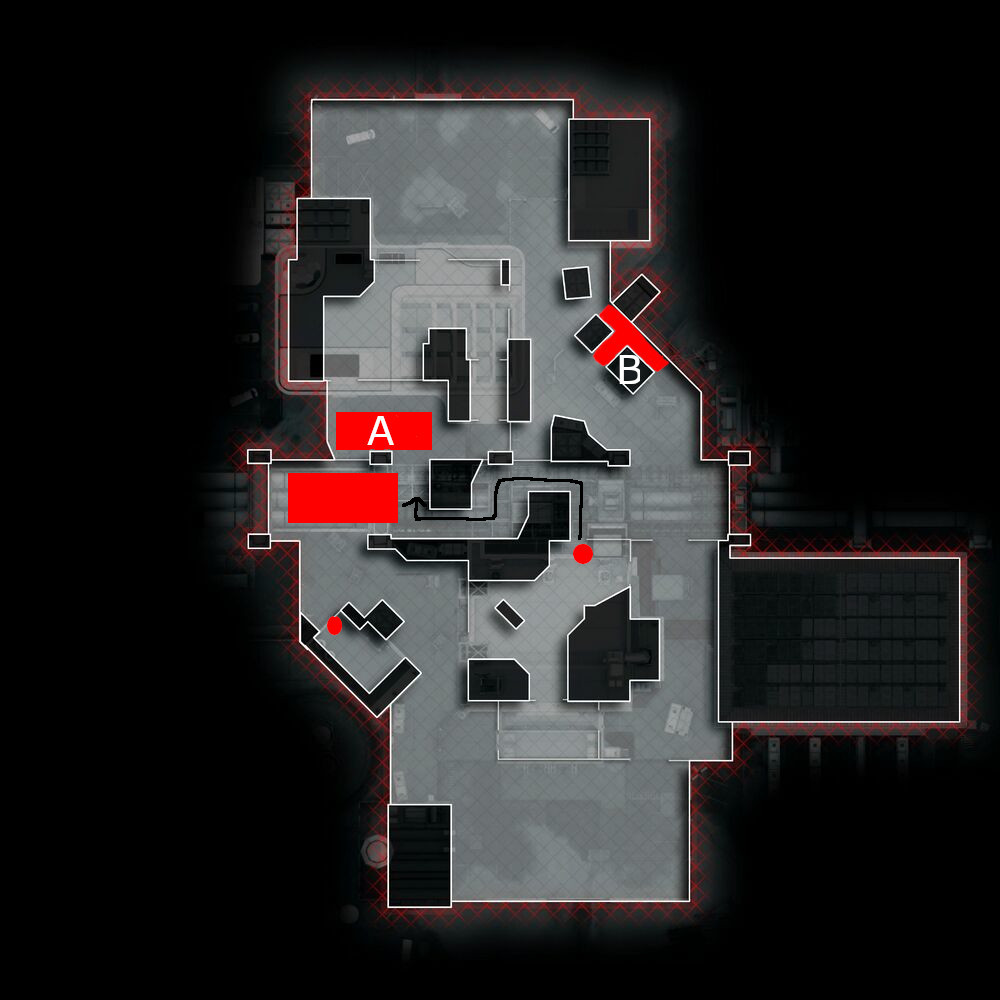 The Attackers approaching A have quite the challenge ahead of them. Upon dropping from the ship, they run up to face the gauntlet, using as much cover as possible in A Mid. This is where deaths are likely to occur, so it is worth using utility or maximising rolling from cover to cover. Although, there a few tricks to make it easier. One example is placing a sniper in the tiny building that opens up directly facing the Climbing Wall on A site. That way any defender there can be sniped to low health or downed, meaning you allies have a better time pushing.

Besides, one player can lurk on the Attacker’s Factory, sitting next to the window and waiting for B side Defenders to rotate through mid or through the Attacker’s Spawn aggressively. If this does not happen, they can attempt to lurk through B site or rotate through Mid themselves. A player can choose to wait here even longer, especially on the post-plant. But players need to head to site if there are too few players to defend to post plant. 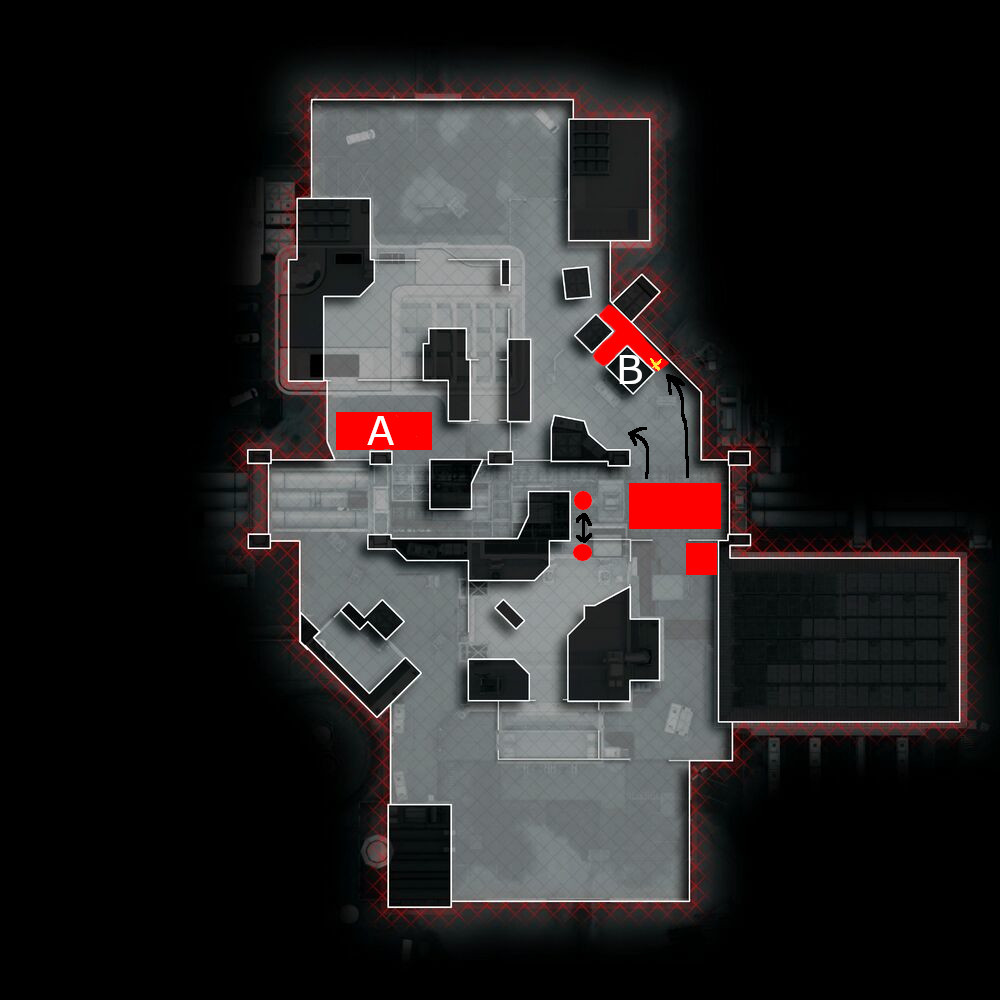 Over on B Site, things are much trickier. The gauntlet on B Site is even more difficult to pull off as there is much more range to deal with, and even less cover once when they get through B Mid. It feels required for the Attackers to bring smokes to reduce the risk of crossing from Mid to B, especially directed towards the barricades near Defender’s Factory. The Attackers have a default plant at the edge of the first shipping container in the planting zone marked with a yellow cross on the image above.

The other safety net for the B site Attackers is the boost before entering B Mid. B side Attackers can climb on top of structures to get an elevated view of B Mid and lots of angles on B site itself. This is great for attacking Snipers or DMR players who can help suppress enemies as their allies make the cross into B Site.

Once again, Defenders need to hold mid to succeed. If attackers can rotate through mid, then they will easily take on opponents about to enter B site. A Defender ideally needs to play on the corner of mid to stop attackers getting that angle. There is also a fall-back option in case they can’t’ hold, as they can go to the Attacking side’s Factory window and hold that angle if needed.

The Fixer and Phantom are two good choices because the Attackers have two recommended sniping positions, with the Defence also favouring those long angles on B site.

Talon and Trench on the Defence are good because Talon’s throwable Recon Dart makes reading sites and rotations easier. Trench is also a great pick for the B site as he slows down attacks from A Main or playing aggressive on B Site with his Barbed Wire.

Saint and Dahlia are great on the defence as Dalia can partner with anyone rotating to another site or holding a site aggressively by reviving her partner. Saint’s ability is generally great to use on allies regardless of map position, and his assault rifle benefits a lot from B’s long-range.

Chaac is an excellent choice for being the duelist on either defensive site with his health benefits and strong SMG / Shotgun and lethal gadgets. Ronin on the other hand is strong on B site by placing her Explosive Throwing Knife ability on the default B plant spot. Her assault rifle is also useful on the map’s long angles. Vy and Anvil are off-meta options, as Vy’s poison can negate an attack on A Main and make life difficult playing aggressively on B Main, while Anvil creates new cover situations Attackers don’t expect.

As for the Attack, Dima’s assault rifle is strong for both sites, and his cluster grenade ability is solid for taking enemies out of cover. Lancer also works well when she gets to either site’s planting zones, or her double smokes work brilliantly on making it easier to get onto B site.  Attackers are free to choose any other rogue as these three recommendations are the backbone of the attacking side.