How to Play Cheshire Park 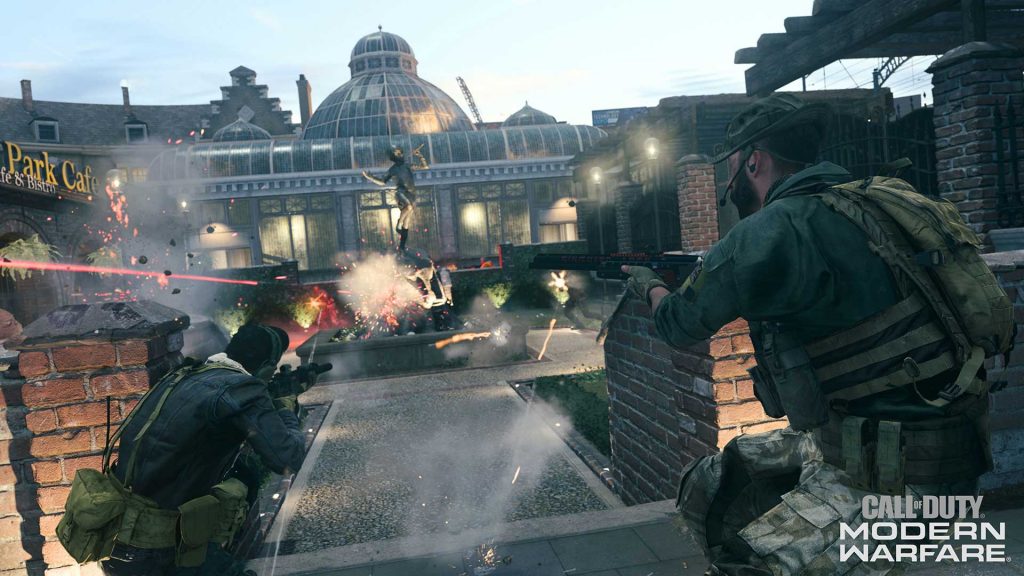 Cheshire Park is set in London, England and players must fight through the residential area. (Photo courtesy Infinity Ward)

Cheshire Park is set in London, England and players must fight through the residential area. The center of the map features a scenic Garden Square where intense gunfights often take place. There are also townhomes and long streets for players to navigate that allow any type of playstyle to thrive. 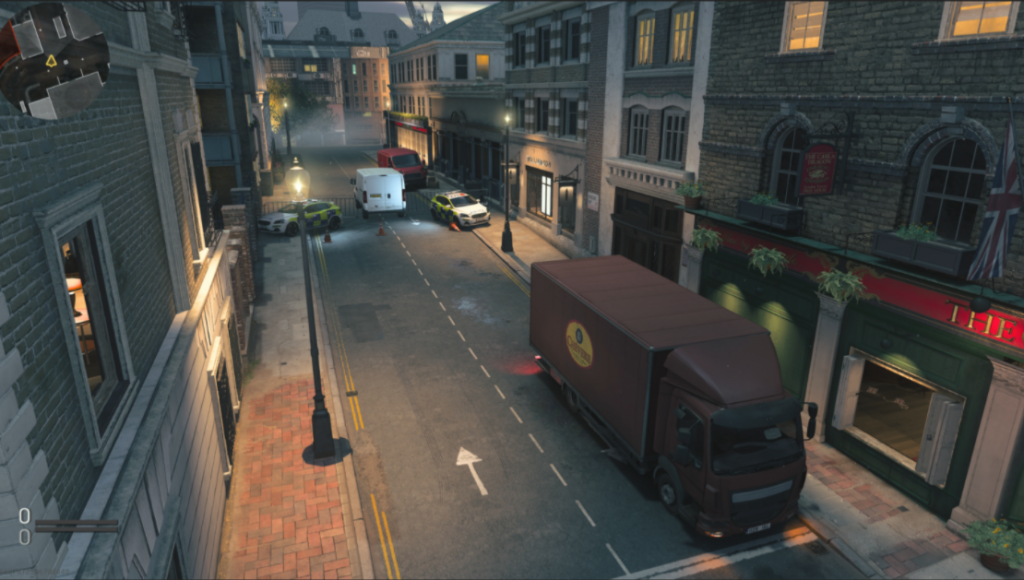 The Allegiance spawn is between the Cask and Dragon Pub and the Residence building. The Conservatory is directly in front of the spawn area which leads into the center of the map.

The C flag is located here in Domination and is surprisingly a tough area to hold. There are two entrances on either side into both buildings with little cover. It is best to have multiple teammates to capture this flag in order to do it quickly.

This area is one of the more useful spawn areas in a Modern Warfare map as it will see a lot of action during matches. Players will rotate through this area often when navigating buildings, and snipers can sit back and cover the Conservatory entrance if necessary. 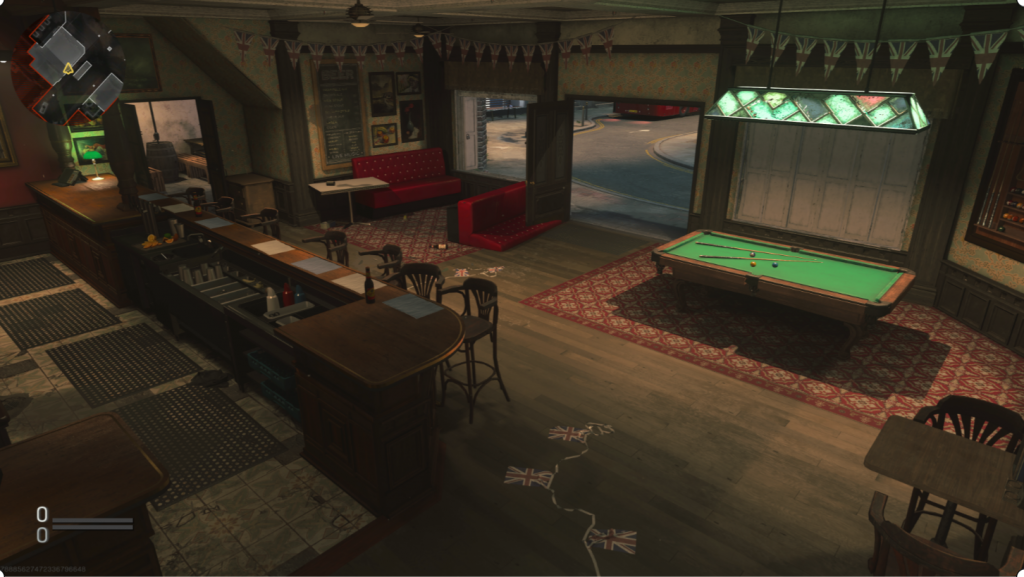 The Cask and Dragon Pub is a cluttered bar that leads into multiple areas of the map. Allegiance players will often run through the pub at the start of the game to reach Retail Row or the side Conservatory entrance.

The main bar area has multiple windows which can be used to cover the Conservatory, Retail Row, and the Allegiance spawn area. The patio area also provides long lines of sight into Retail Row which is perfect for snipers.

This area is contested often in most matches, however, so be prepared for enemies constantly trying to take the position. 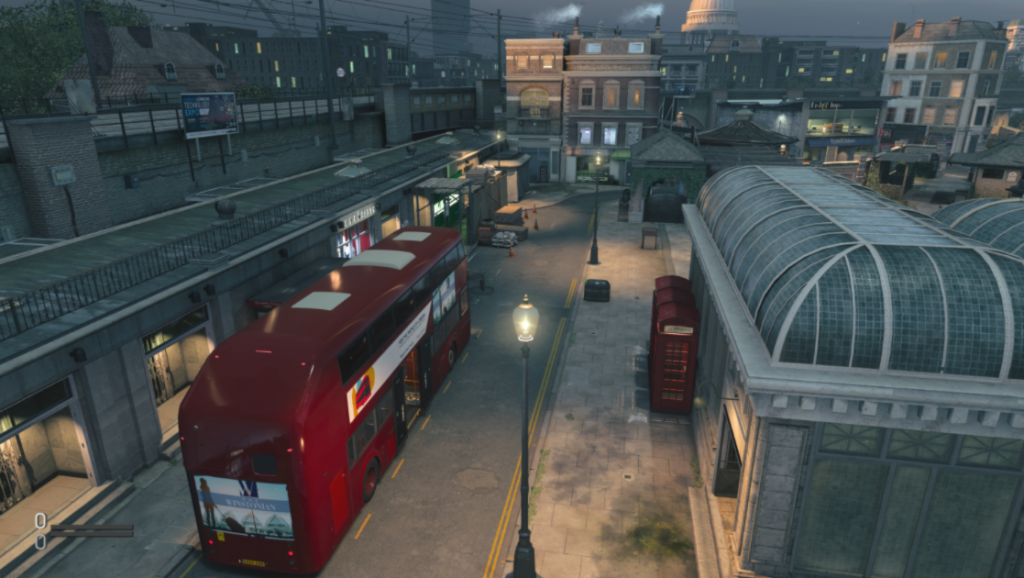 Retail Row is a long street running from the Cask and Dragon Pub to the Corner Market. There are several vehicles and obstacles that provide cover when navigating the area, but players should always expect snipers at either end of the street.

There is an entrance leading to the Garden Square near the middle of the street which a lot of players use to flank either spawn areas. This is an important entrance to hold in all modes to prevent enemies from easily taking objectives or picking up easy kills.

Some game modes such as Search and Destroy and Demolition feature objectives in retail row which means players will be in this area often. 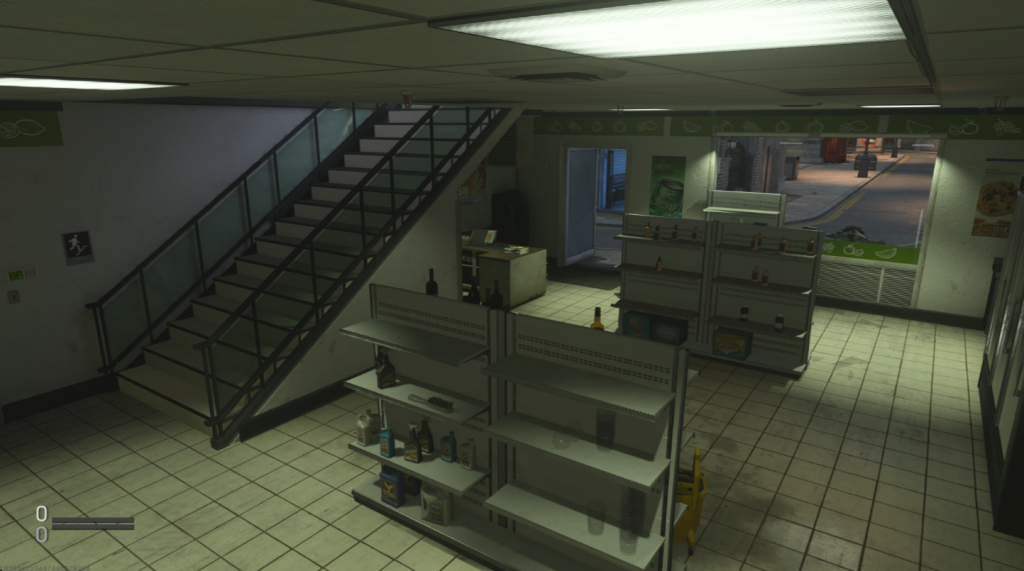 The Corner Market is a small grocery store at the end of Retail Row. The first and second floor windows provide lines of sight down the long street which are popular spots for players with long range weapons.

The first floor features a few shelves that provide cover for players pushing through the building. There is a door and window that can be used as entrances from Retail Row and a back door that leads to an alley on the side of the building.

The Corner Market is mainly used to cover Retail Row which can be difficult to counter. Enemies can be flushed out or eliminated with explosive weapons. However, so keep that in mind when up against camping players. 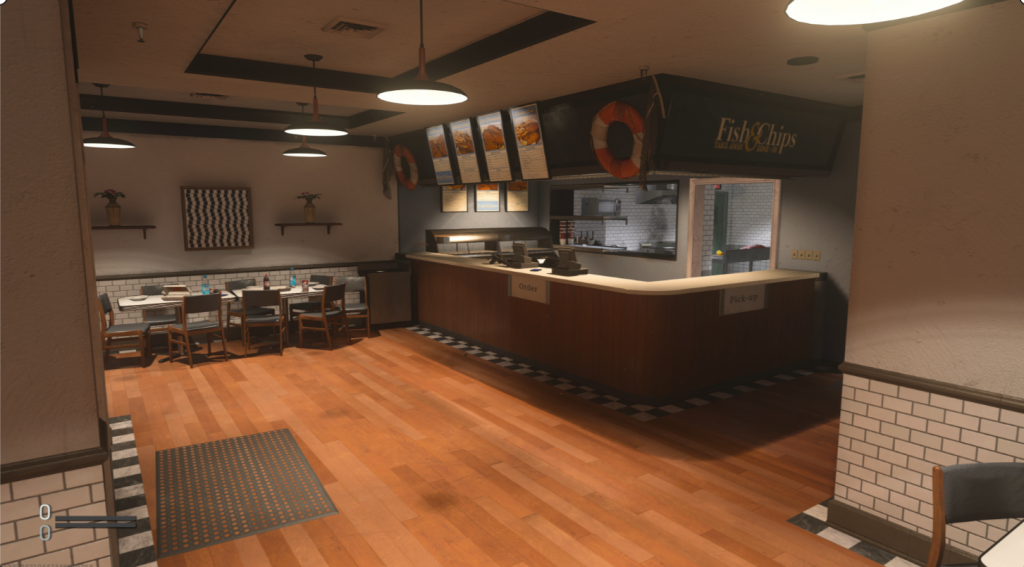 This fast food restaurant is on the Coalition side of the map and is a cramped, close quarter space. The Fish and Chips Shop is an objective location on Cyber Attack and Hardpoint.

Players can navigate the dining area and the kitchen which each have an entrance. The kitchen entrance leads to the alley towards the Corner Market, and the front entrance opens into the street that leads to Retail Row.

Most gunfights that happen in this location are in passing except during the Cyber Attack and hardpoint game modes. Players can use the front windows to watch for players sneaking into the Coalition spawn if needed. 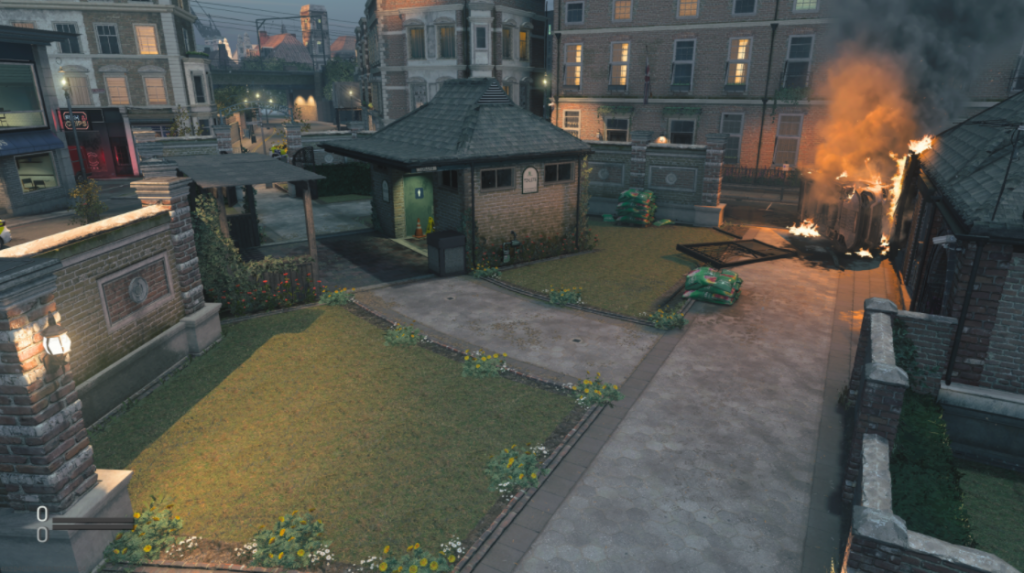 This area is next to the Garden Square and Coalition spawn entrance. There are several entrances to the area which makes it a hub for several parts of the map.

The Crashed Van is next to the entrance to the Row Houses area and provides cover from snipers. Players will also push through this entrance when avoiding the Garden Square which means it is a good idea to constantly check this area.

The Toilets mainly serve as a hub to the Garden Square and Coalition spawn and do not provide much strategic value. 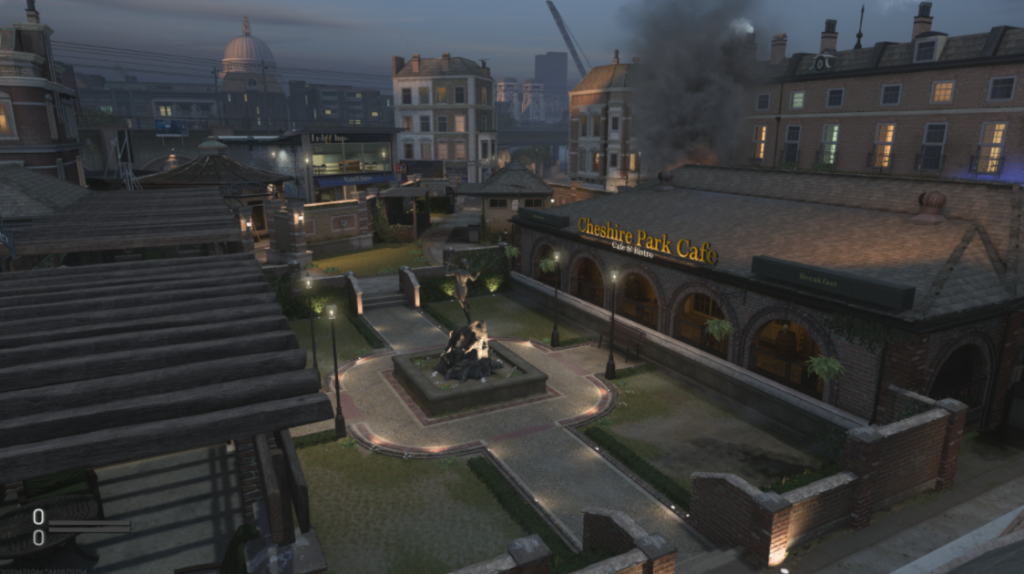 The Garden Square is the center area of Cheshire Park. There is a statue in the center of the square where several objectives in various game modes are located.

The Square has two entrances on either side that lead to the Conservatory and Toilets/ Crashed Van areas. Both entrances feature stone walls which can be used for cover when covering objectives or looking for enemies.

There is also a side entrance which leads to Retail Row and is perfect for flanking or avoiding enemies holding a position. It is very risky to run through the Garden Square as there is little cover for players to use. If you must go through this area make sure to do it quickly or use equipment to cover your advance. 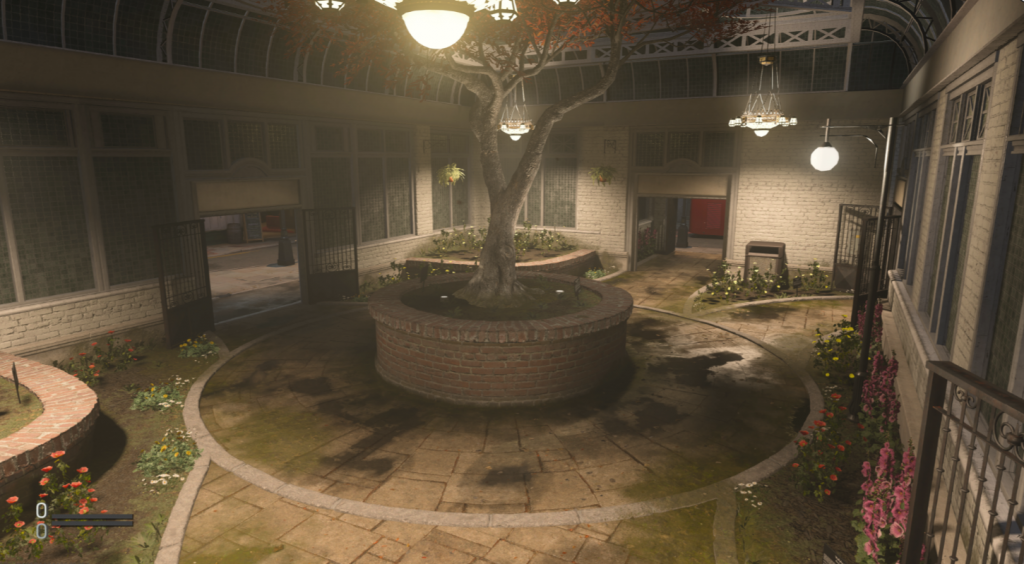 The Conservatory has three entrances leading to the Allegiance Spawn, Retail Row, and Garden Center areas. Players constantly push through this building in almost every game mode.

This building provides a direct route to the Garden Center for Allegiance players. It can also be used to get deeper into Retail Row and to prevent being an easy target for snipers. The tree in the center of the room can be used as cover for players watching any of the entrances, but it also leaves their back wide open to enemy players. 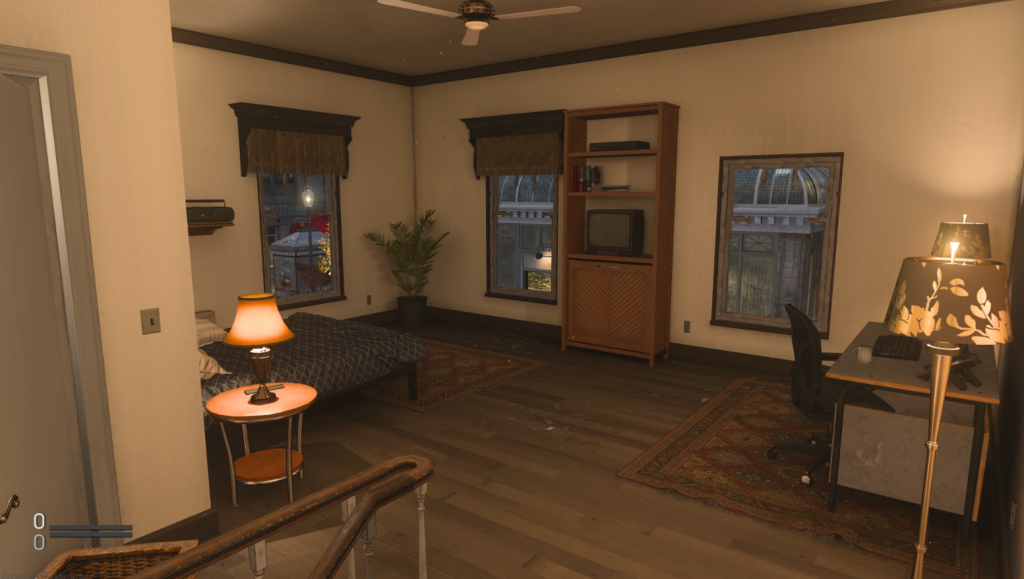 The Residence building in Cheshire Park is a two story home located next to the Allegiance spawn. The second story windows can be used to cover the Conservatory, Row Houses, and the front of the Cask and Dragon Pub.

Snipers will often sit in this building to pick off enemies from the distance or to prevent flanks. This is an important building in several game modes as it directly overlooks bomb sites or objectives. 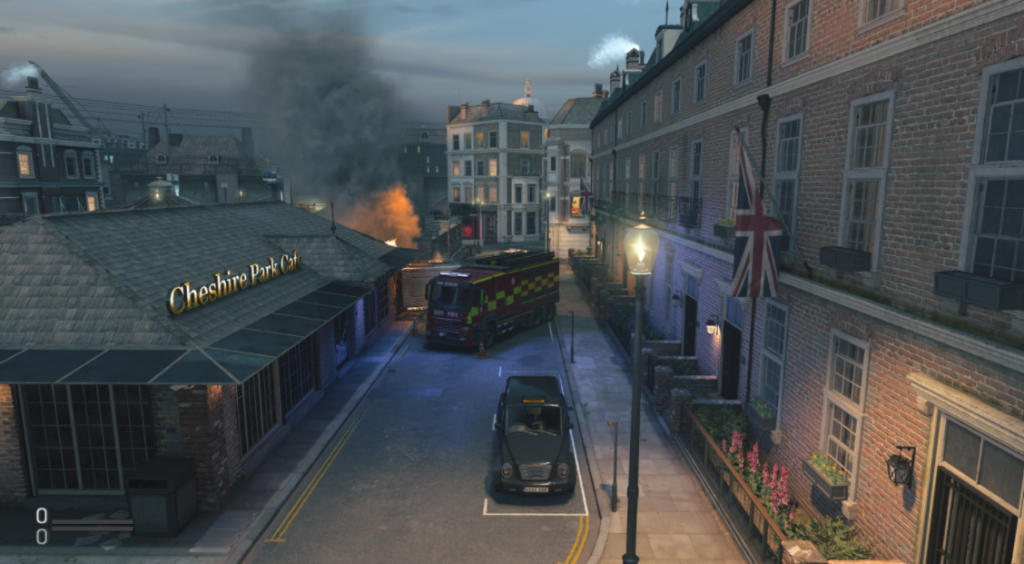 The Row Houses is a street that runs from the back entrance of the Conservatory to the Insurgent headquarters and Coalition Spawn. There are several vehicles on the street that provide decent cover.

The A bomb in Search and Destroy and Demolition is located in the Row Houses area, and the fifth Hardpoint location is also towards the end of the street. This area can be covered with long range weapons, but the cover also allows aggressive players with close quarter weapons to be effective. 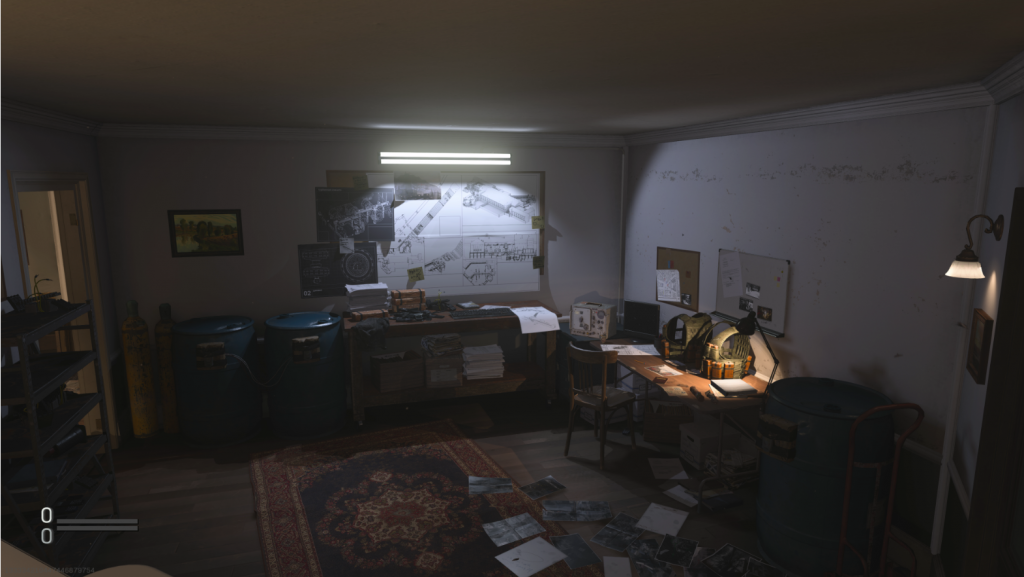 The Insurgent Headquarters is a building used by terrorists to plan their attacks around London. The building offers a decent view of the Row House area and can be used to cover the Crashed Van entrance.

One entrance to this building is next to the Coalition spawn and is often used by players rushing down the side of the map. Players will often sit in this building when they have the flag in Team Defender as it is easy to hold for long periods of time. 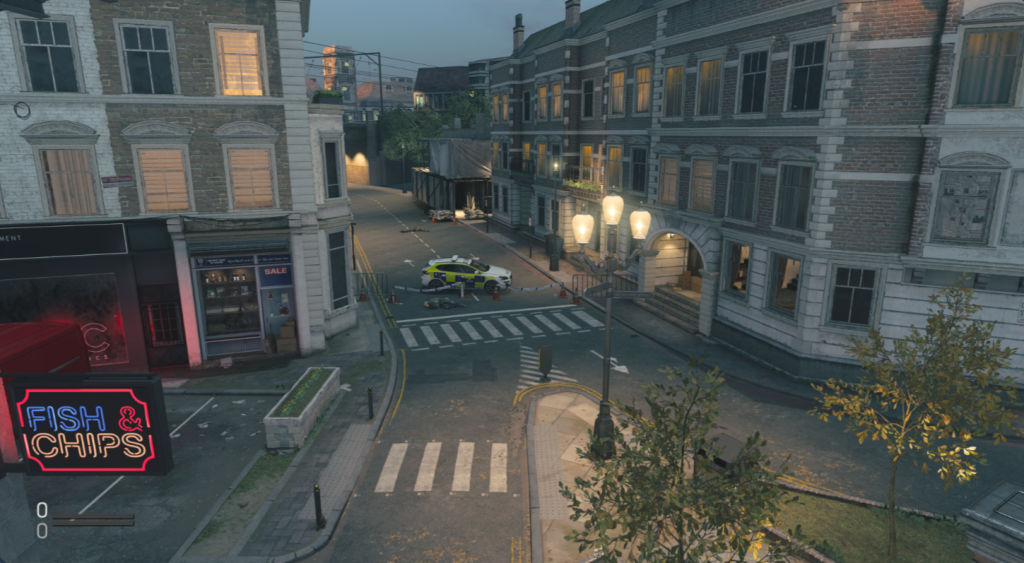 The Coalition Spawn is between the Fish & Chips shop and the Insurgent Headquarters. There is also an entrance to the Toilet area of the map which leads to the Garden Center.

Players do not spend a lot of time in this spawn area but will often find themselves in one of the nearby buildings. This area does not have a lot of cover for players and should be avoided if possible.

Cheshire Park offers fast paced gameplay without it being overwhelming. Don’t be afraid to experiment with different playstyles to find the perfect one for this map.