How to Play Chaac in Rogue Company 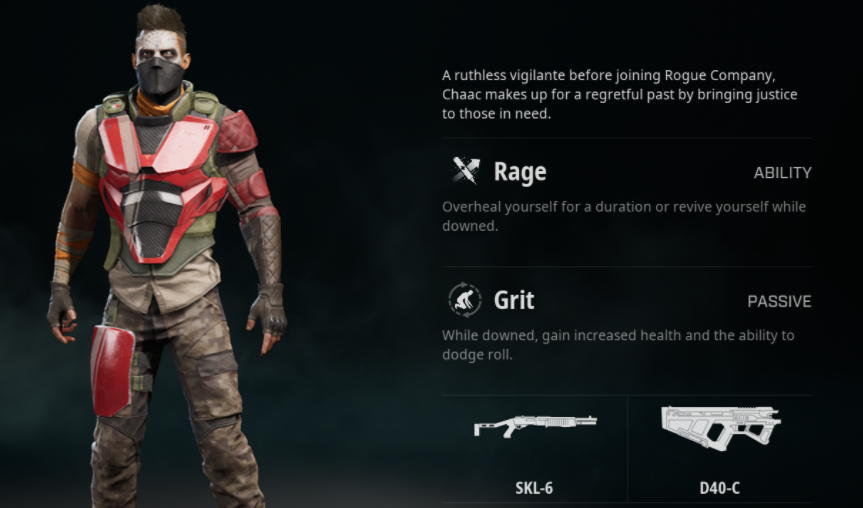 Chaac is one of Rogue Companies most adaptive and engaging duelists in the game. (Photo courtesy Hi-Rez Studios)

Chaac is one of Rogue Company’s duelists, whose job is to get into the thick of the fight and create an opening for his team. Every dualist has specialities, with others working for the team, 1v1ing or something else. For Chaac, he focuses more on health recovery and self-revives. For this reason, Chaac is an interesting duelist, that fills the role of a lurker, or a charge-in rogue.

Chaac’s active ability is Rage – which allows Chaac to heal himself for a duration, which can also increase his max health pool temporarily. Its other purpose is to offer himself a self-revive that takes just as long as regular revives. The ability makes him a rather tanky duelist that can get across open spaces. This makes him great at pushing open and difficult terrain where rogues are at risk of getting downed – such as on Windward. The other use is to win 1v1 duels or to enter sites as the frontline. It is also a fantastic ability for playing in the post-plant situation when you need that extra strength, or for roaming and lurking when you find yourself downed or needing that quick boost. Its other function is become the entry fragger for the team, gain that bonus health pool and create an opening for your team for difficult bomb sites.

To reaffirm Chaac’s ability to be a strong roamer, lurker, and entry fragger, Chaac’s passive increases his downed health pool and allows him to roll while downed. What this means is Chaac can create the opening for his team and roll out if he finds himself downed, patiently waiting for a evive while his team mops up the rest. 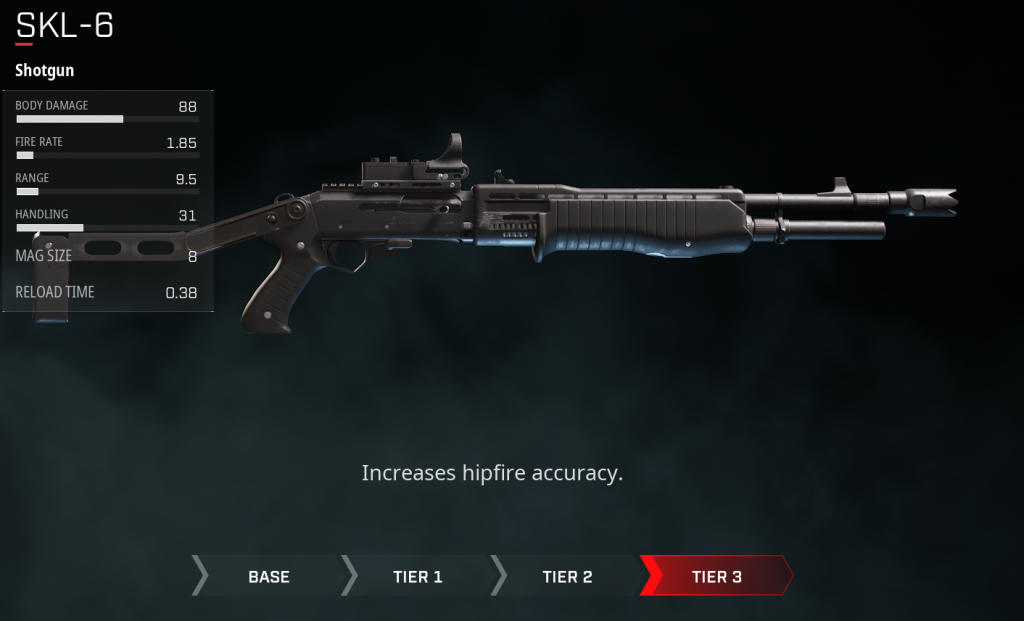 One of the two primary choices Chaac has is a shotgun. The SKL-6 is the standard pump-action that packs a punch at point-blank range. Shotguns are usually a difficult choice to invest in, but Chaac is one of the rogues it Is worthwhile going on. With Chaac opting to charge sites with his Rage ability, a shotgun is a good choice for those point-blank site pushes. Alternatively, the shotgun is another good choice when opting to lurk around rotations or short-range angles. A great example of short-range ambushes with the shotgun is on both A and B on Lockdown.

As for the weapon itself, it can be upgraded to increase magazine size to eight from five with tier one. Its range can go to 9.5 from 7.5 with the tier 2 upgrade, which makes it decent for contending some SMG kill windows. The final upgrade improves its hipfire accuracy, making the shotgun spread not as devastating. However, it is not that big of a deal since shotguns at point-blank hipfire accuracy is strong anyway. 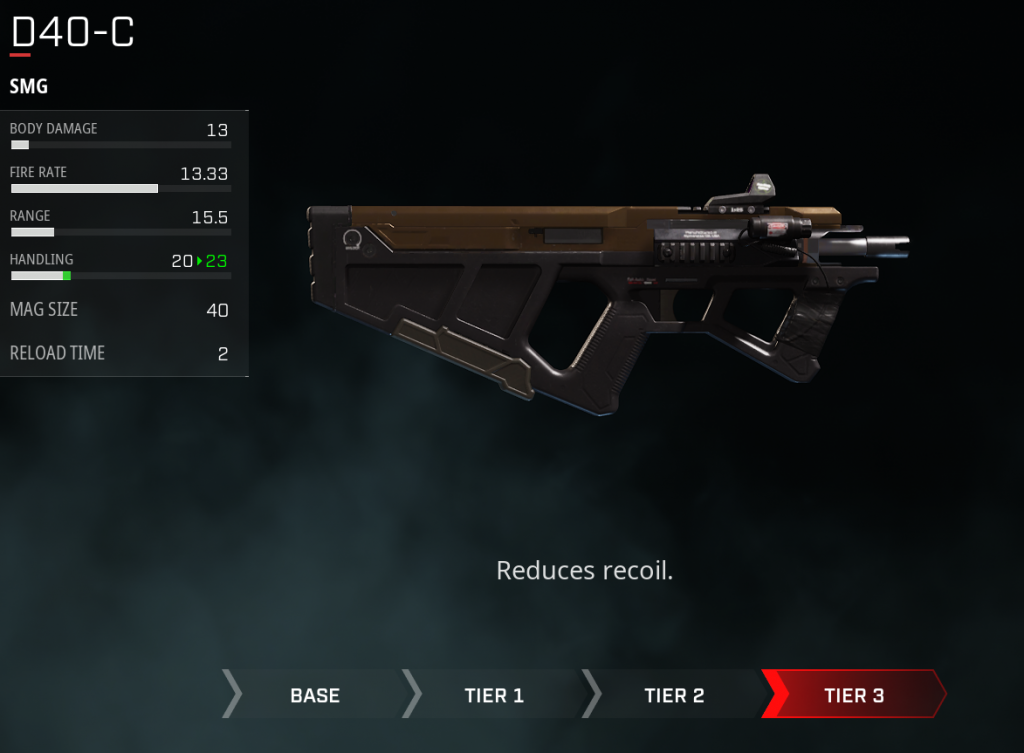 The D40 is Chaac’s SMG that is low power but high ammo and firerate weapon. The weapon also has a strong range which is slightly behind Talon’s and Gl1tch’s SMG. This means that Chaac can pump out rapid-firing rounds at a decent distance to pressure opponents. For any situation where the Chaac will likely have to deal with range, the D40 is the ideal weapon for players to run, in particular maps like Skyfell, High Castle, and Windward, to name a few.

Upgrading the D40 only furthers the weapon to a whole new subclass of SMG. The upgrades increase hipfire accuracy, to increasing damage range from 12.5 to 15.5 and the final upgrade reduces recoil meaning those mid-range fights get so much better. Just be careful with spraying at range as the weapon as a nasty spray pattern then becomes somewhat inaccurate at max distance.

Chaac shares a starting pistol with Ronin and Lancer – the Spitfire. The Spitfire is a decent machine pistol designed for getting right into the fight. Chaac can get good use out of the pistol in the pistol and eco rounds because of his rage ability, meaning he has much chance of surviving when getting into kill range. 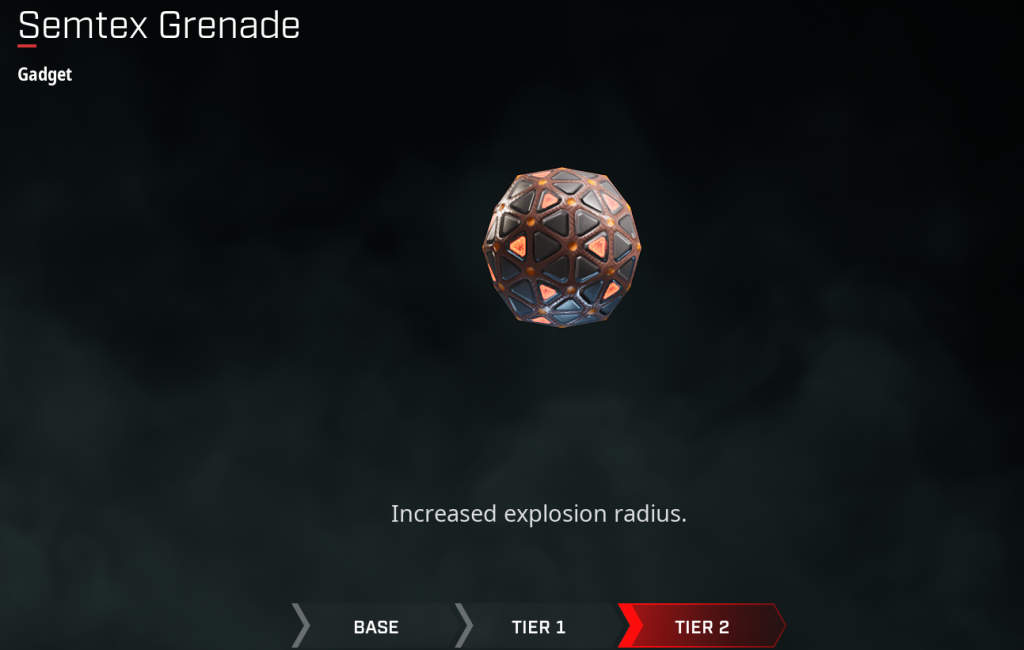 Chaac naturally gravitates towards is the Semtex. Semtex’s are the best way to force out enemies from their cover spots as they detonate almost immediately. While they may not necessarily kill opponents, they do splash damage, that will be enough to get them out in the open for Chaac’s weapons to finish them off. Upgrades to the Semtex mean its stick damage goes to 250, guaranteeing they one-shot a stuck opponent. The tier one upgrade also increases throw speed for securing those well-aimed throws. The final upgrade widens the explosion radius, so the 250 direct damage goes a lot further to surrounding enemies.

Flashbangs are Chaac’s tool to create chaos in the enemies ranks. The gadget temporarily blind enemies caught in the blast radius. The flashbangs are great for getting removing cover advantages when you need to push as dropping the flashbang just to the side of their cover should work. The flashbangs get better with increased throw range so you can set flashbangs up safely if you learn throwing spots, finally you can get another one with the extra grenade count.

The choices of perks should go down to either replenish or Life Drain for your $10,000 perks. Life Drain keeps Chaac as one of the healthiest rogues in the game, while Replenish reloads his weapon to continue mowing down enemies. Chaac burns through ammo in his SMG, and the shotgun has limited capacity anyway, so it is useful.

The other perk choice is Cloaked. Chaac is all about roaming, hiding behind short angles to surprise with his shotgun and more. Getting revealed from anything like Intel rogue to a reveal perk is going to punish Chaac a lot. If you opt for that playstyle with Chaac, this is an essential purchase.

Chaac should either buy nothing and save for the next round or go right ahead with a semtex grenade during round one.

Round two should always aim for a primary purchase based on the site you are playing, playstyle, or map.

Upgrading primary weapons, buy gadgets or upgrade your gadgets in round three is the way to go. Lurkers and roamers can also opt for buying the Cloaked perk instead of the aforementioned purchases during this round.

Round four players may potentially have enough to get a $10,000 perk of their choice, if not then continue to upgrade your current kit.

Overall, Chaac is a fantastic rogue with plenty to think about and various ways to play the rogue. Chaach is by far one of the most fun rogues to play, especially when you get to play Rogue Company’s diverse site strategies and map in the pool.