How to Play Broadcast

Broadcast can be confusing at first. (Photo courtesy Activision)

Broadcast is a new map introduced in season six of Call of Duty: Modern Warfare, but it should look familiar to most players. Broadcast originally appeared in Call of Duty 4, the original Modern Warfare, and is also a location on the Warzone map. The multiplayer version has a few differences that make it more contained, but it still provides a similar experience.

The interior of the Broadcast features two floors perfect for close-quarter combat and quick engagements. Players can also cover hotspots with long-ranged weapons if positioned correctly. The Rooftop area is also accessible and provides more opportunities to maneuver around the building. The Parking Lot and the surrounding buildings also provide decent spots to cover the exterior space, but teams should always control at least part of the main building.

Broadcast can be slightly confusing during the first few matches, but learning the layout will help you dominate the enemy. 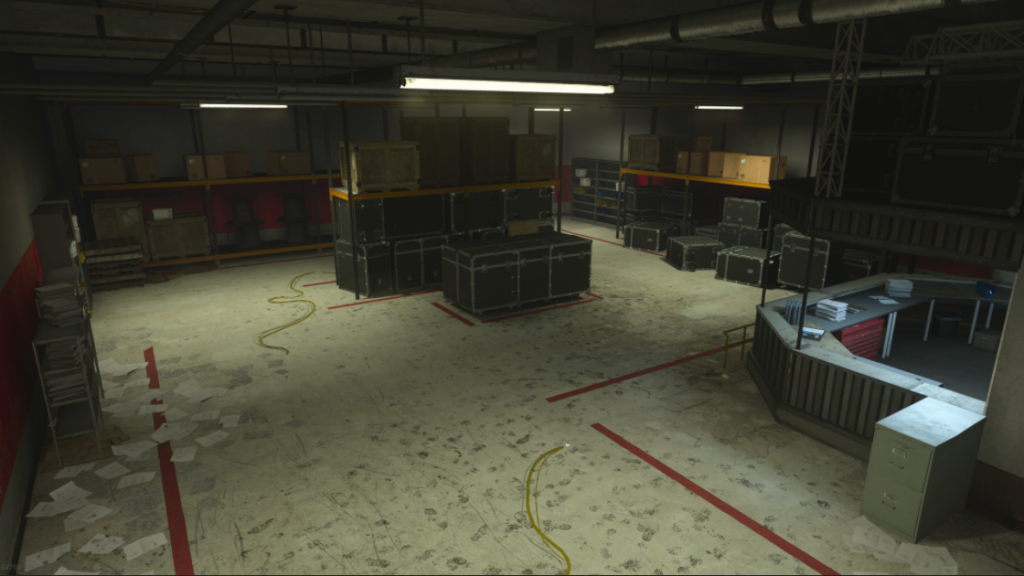 The Storage area in Broadcast is a large room that leads to three other parts of the map. The main doors connect to the staircase leading to the roof and a large Newsroom. The other doors connect to a Back Room that also connects to the NewsRoom and Large Office.

Storage is not an important area in most game modes, but one of the bombs in Cyber Attack is located here. Most players will rotate through storage when trying to reach other areas of the map, so players could potentially wait in Storage to cut off rotations.

There are several crates in the center of the room, which serves as cover for both entries, and there is a small workshop in the corner of the room. Players can use the workshop to cover both entrances and help their team hold specific map areas. 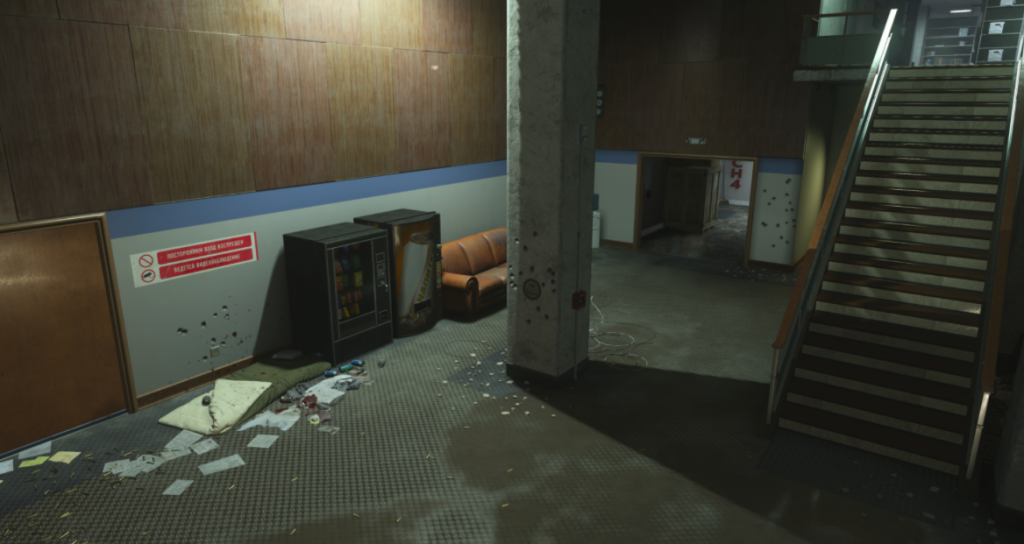 The Back Room is a small area that connects the Storage room, News Room, and Large Office. Players should avoid sitting in the Back Room for long as there is minimal cover and several vantage points for enemies. 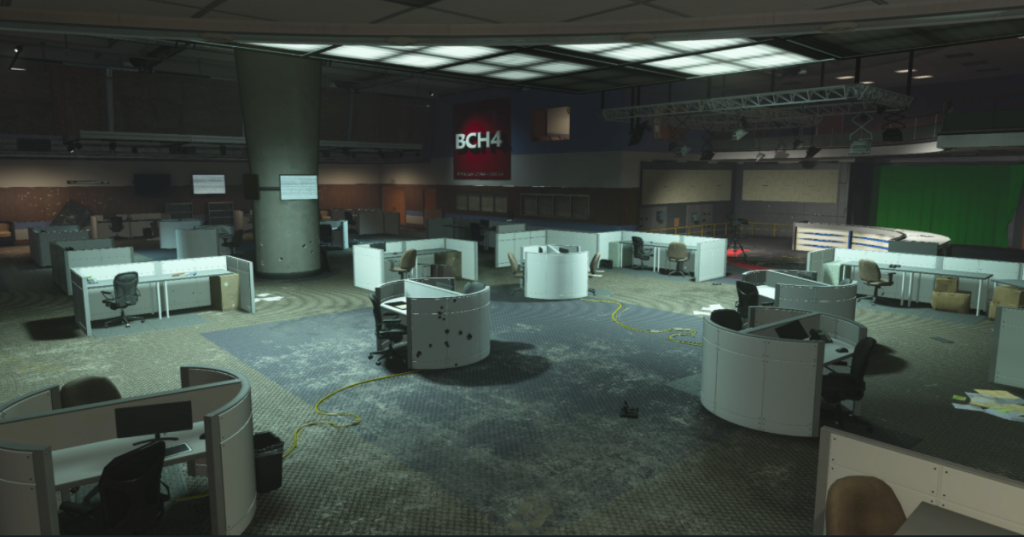 The Newsroom in Broadcast is the center point of the map and features several cubicles and multiple entrances. The Storage, Back Room, Server Room, Corridor, and Atrium all connect to the Newsroom, making it one of the most deadly map areas.

A Hardpoint location is centered in the middle of the Newsroom and is one of the most challenging positions to hold. The cubicles provide decent cover, but the multiple entrances are tough to cover at all times. The Small Office also overlooks the Newsroom, which either provides cover for the team below or an opening for the enemy team to cause damage from above.

It is best to move through this area quickly to prevent becoming an easy kill. However, if you must control the area in a match, make sure to use the multiple entrances to flank unsuspecting enemies. 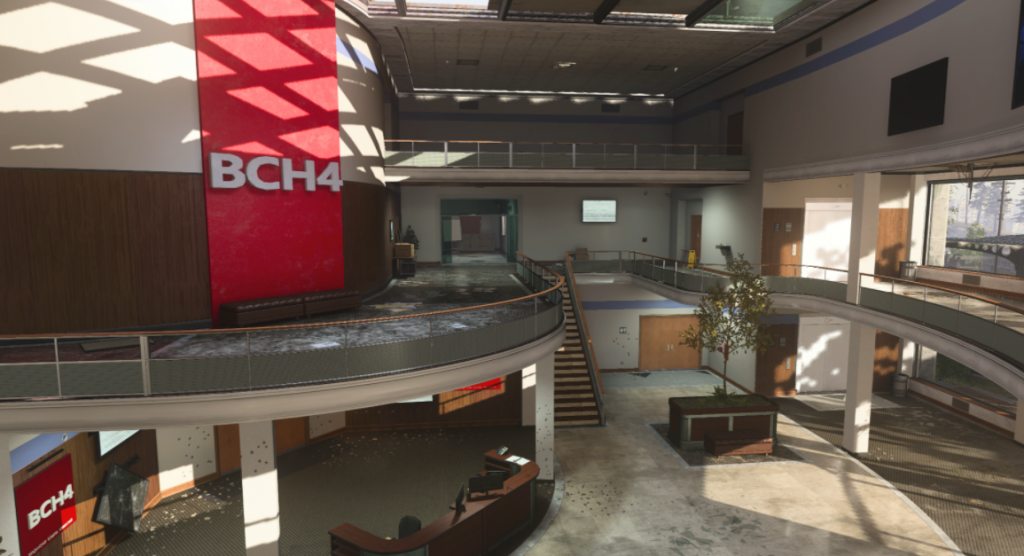 The front of the building features a massive two-story Atrium. The Atrium’s first floor has two separate entrances to the Newsroom and one entrance to the Bathroom and Printer areas. The first floor does not provide a lot of cover, especially when pushing from the Parking area. The second floor has slightly more protection options, but it is still a better idea to move quickly through the Atrium or eliminate threats before advancing.

The Atrium has one Hardpoint location in the middle of the second-story area. The Large and Small Office rooms both overlook this position, and any team attempting to control this hill should also hold one of these areas. Long or mid-ranged weapons can cover the Atrium if positioned correctly. 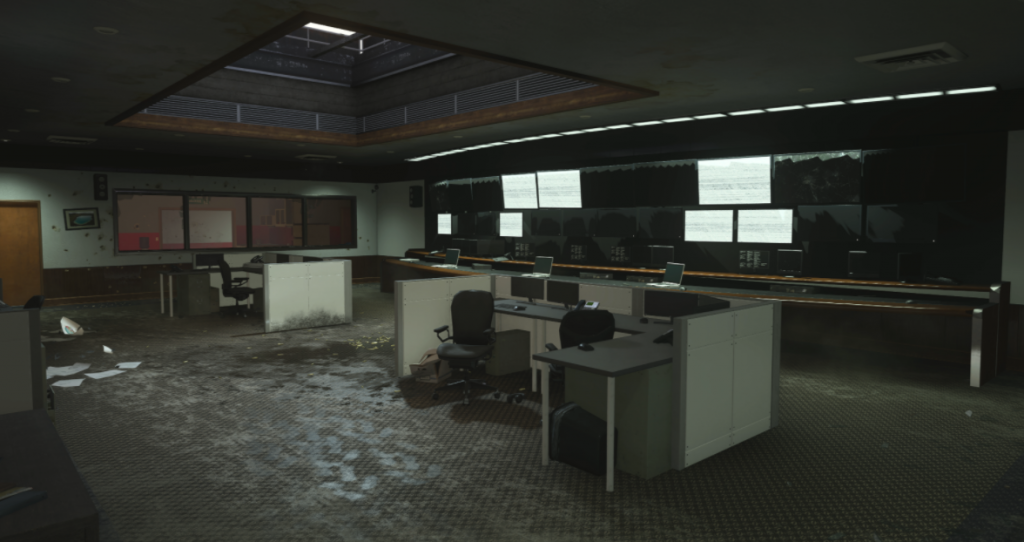 The Newsroom’s southeast corner connects to a Server Room that wraps around the building’s southern wall. This area consists of a small room with several servers, a main room with a few desks, and a small kitchen that connects to the Corridor.

Players who want to avoid the Newsroom can use this alternative lane to cross the map with less risk. However, the Server Room does have a large open skylight to the Rooftop where players can sit to prevent rotations. It is best to move quickly beneath the skylight to flank enemies before being spotted. 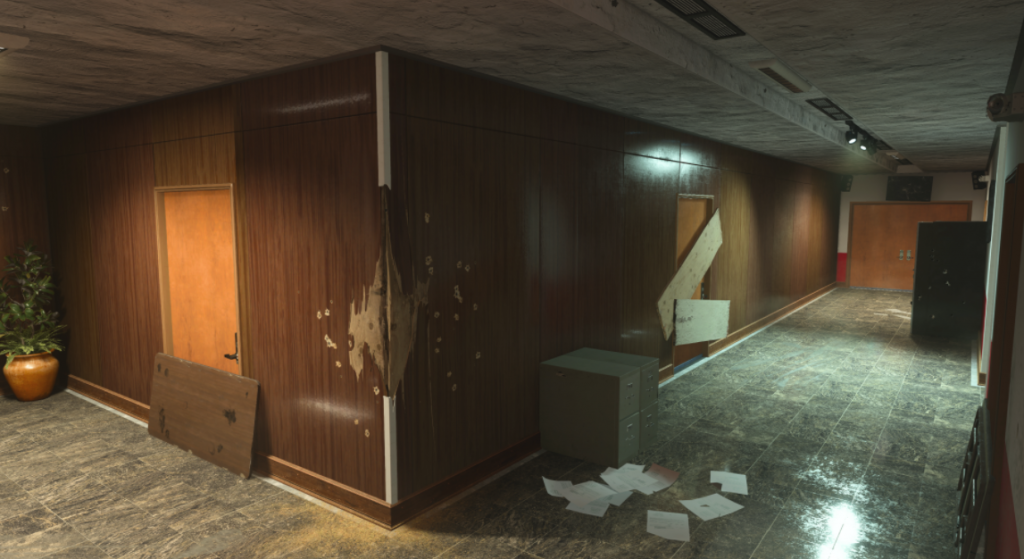 The Corridor is a long hallway that connects to the Newsroom, Server Room, and bathroom and Reception areas. Players can use the Corridor to navigate between the Atrium and News Room without crossing the large open space. The Server Room also serves as an alternative route to further avoid the center of the map.

Players can sit at either side of the Corridor to hold the area, but both sides are susceptible to flanking enemies. 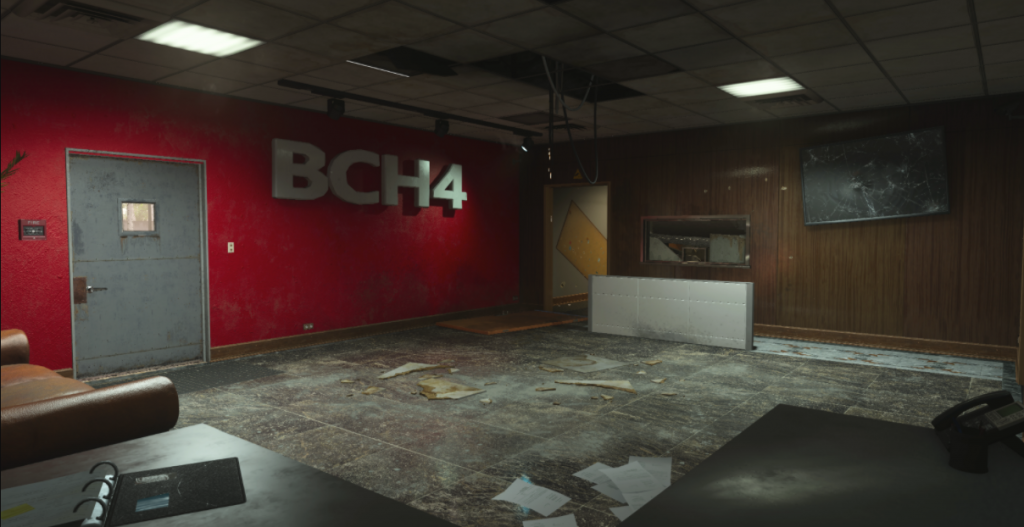 The Reception area is a small room that serves as an entrance from the Parking lot. Most gunfights will not occur in this area, but it is still a choke point for players attempting to enter the building.

The Reception room connects to the Bathroom and Corridor, which leads to the Atrium and News Room, respectively. Well placed utility can help cover this entrance while players focus on more heavily contested areas. 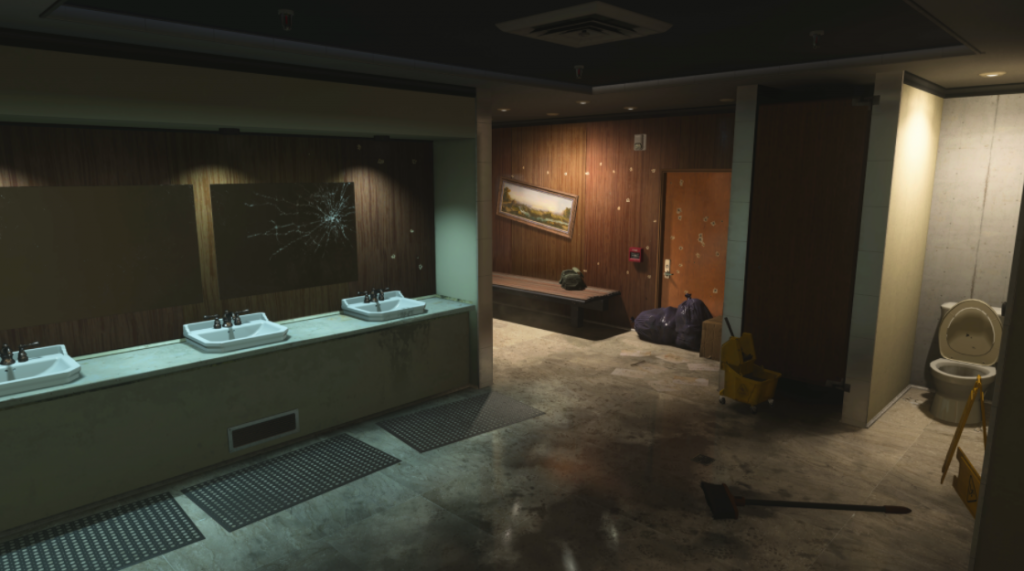 The Bathroom mainly serves as a connector between the Corridor and Atrium but is a solid lane to the building’s southern part. There is very little strategic value in this area, but one of the exits is next to the Atrium stairway. Players will often use this stairway or the opposite entrance towards the Corridor, so players with patience can potentially disrupt a team’s movement through the Bathroom. 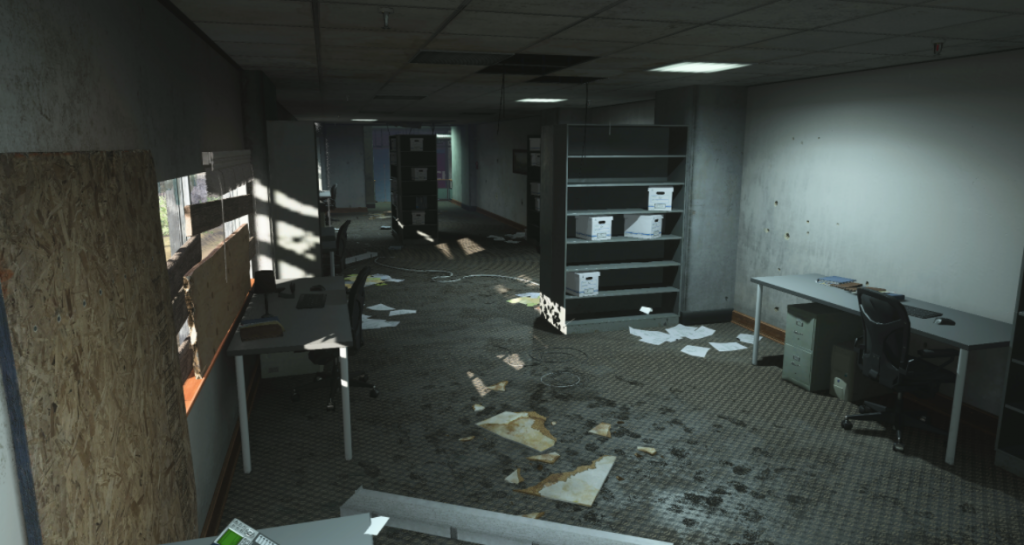 The Large Office in Broadcast connects the Back Room and the second story of the Atrium. This long room is one of the hills in Hardpoint and is challenging to control and break. The office’s backside overlooks the Back Room, where players can sit and prevent enemies from pushing out of the Allegiance Spawn.

The office’s front side has a direct line of sight into the atrium’s second story that players can use to eliminate enemies pushing from the Rooftop or Small Office. 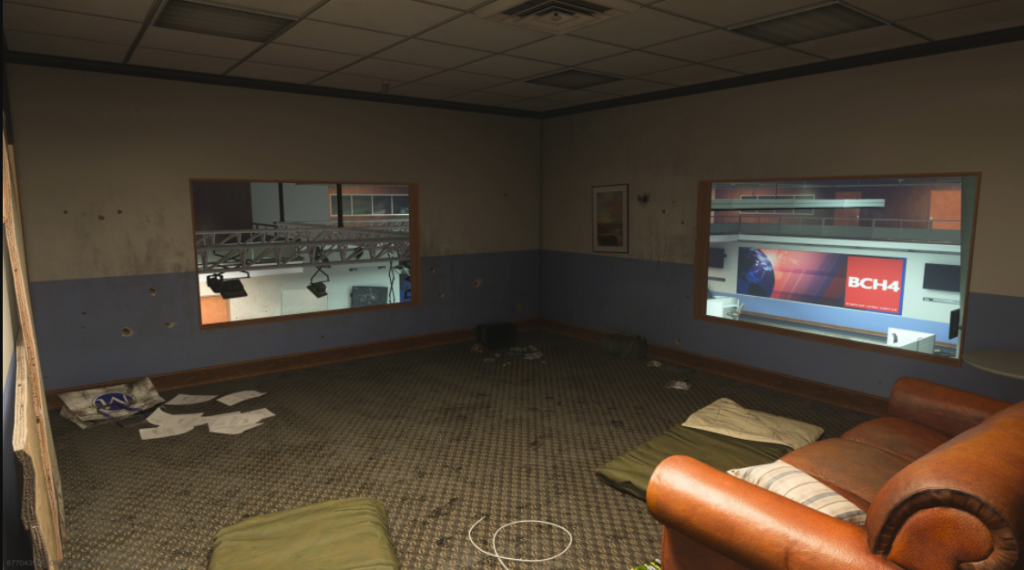 The Small Office overlooks the Newsroom and connects to the Rooftop of the building. The smaller area of the office has two windows that face both sides of the NewsRoom. Players with medium or long-ranged weapons can use this area to pick off enemies from a distance.

The small boardroom offers a small amount of cover for players covering the Atrium and Rooftop entrances. A coordinated team could potentially control the two main areas of the map from this vantage point. 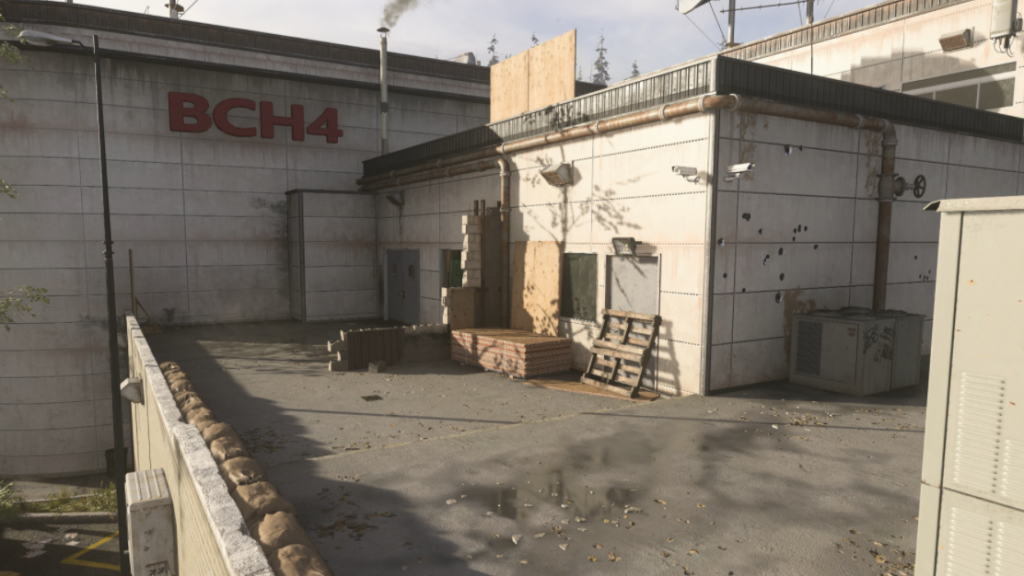 Vents is the front part of the Rooftop that overlooks the Parking Lot and connects to the Small Office and Atrium. This is either a power position for long-ranged weapons or a difficult area to maneuver for run and gun players.

The Vents offer minimal cover for players crossing the rooftop, and enemies in the Parking Lot have a clear view of players above. However, players can use this position to help keep Coalition players in their spawn and help spawn trap teams to maintain control of the map.

The Vents area directly connects to the Rooftop above the Server Room. 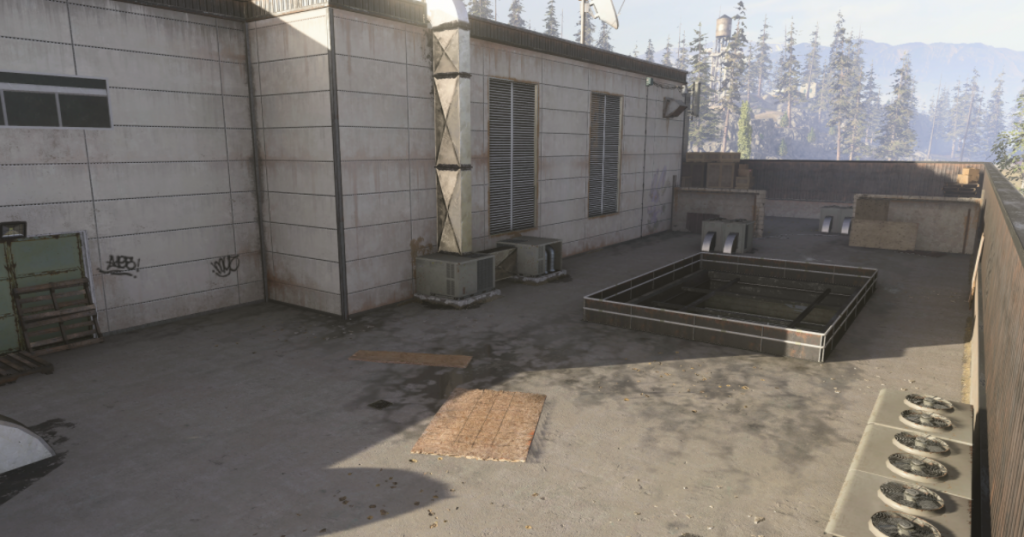 The Rooftop in Broadcast is towards the back of the building and connects to the Storage Room through a small staircase. This area is the location of a Hardpoint hill and the B flag in Domination.

The backside of the Rooftop features two walls that provide cover for players trying to control the area. The opposite end that connects to the Vents area also has a broken wall that can be used to eliminate players in the middle of the Rooftop safely.

A large skylight sits in the center of the Rooftop, which connects to the Server Room. Players can use this line of sight to control the lower floor and can even jump down if necessary. However, be mindful of the fall damage as the distance is enough to kill an injured player. 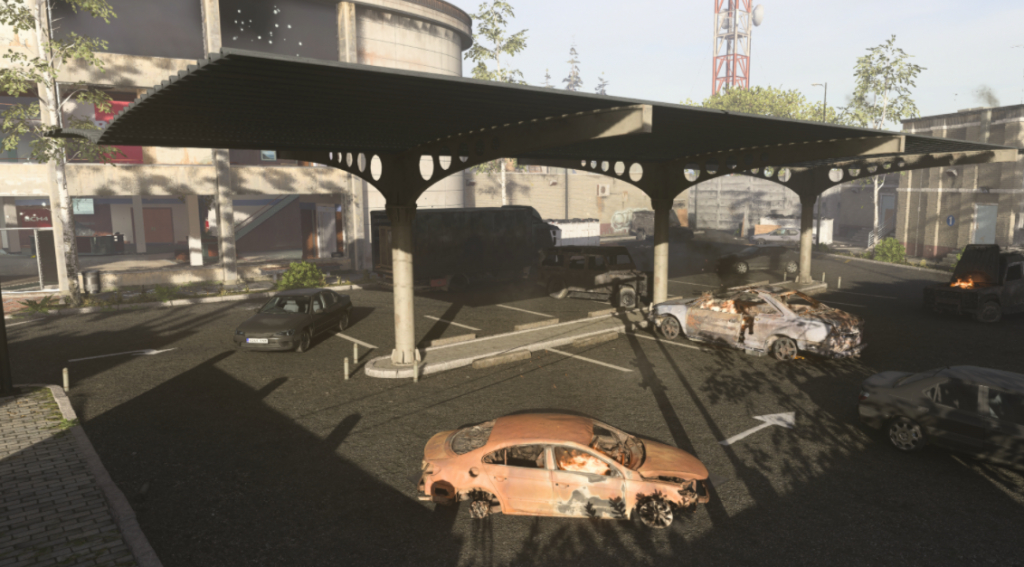 The Broadcast Parking Lot is a large area with several destroyed cars and obstacles. The Atrium overlooks the Parking Lot, and the Vents also provide an excellent vantage point of the area. A doorway leading to the Reception room is also accessible on the far right corner of the building.

The various objects around the Parking Lot can be used as cover, but players will still be vulnerable to the second story. A large metal container blocks the main windows into the Atrium’s first floor, and a Hardpoint location is also located here. Players can hold this position relatively easily if they spread out and cover the Atrium and right side of the building.

The backside of the parking lot is walled off with several buildings on the other side. Some of these buildings are accessible and the perfect spot for snipers. 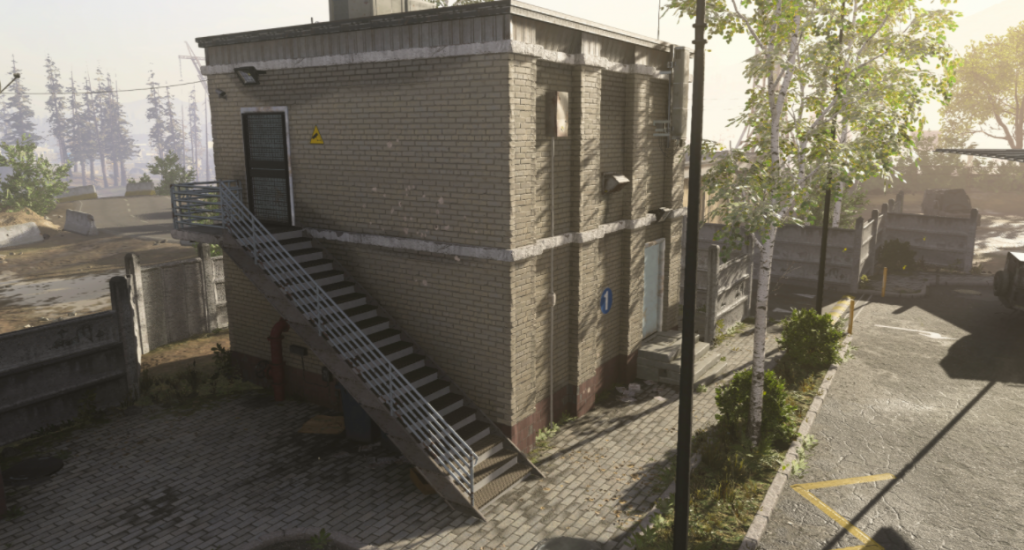 The Grey Building is located on the southwest edge of the Parking Lot near the Coalition Spawn. The first floor of the building is accessible, but the doorway to the second floor is blocked. Players can still use the stairs to get an elevated line of sight onto the Rooftop.

The doorway into the building also provides some cover for players covering the Parking Lot, but there are usually more critical areas to cover in the main building. There is also a small alleyway behind the Grey Building that exits towards the Reception Door and Dumpster area.

The Small Building is next to the Grey Building on the other side of the Coalition Spawn. Players spawn in the small road between the two buildings with walls on both sides. The Small Building features two small rooms with several windows and a small parking lot in the back.

There is not much strategic value in this location, but a truck in the rear parking lot does provide a decent line of sight towards the Small Office. 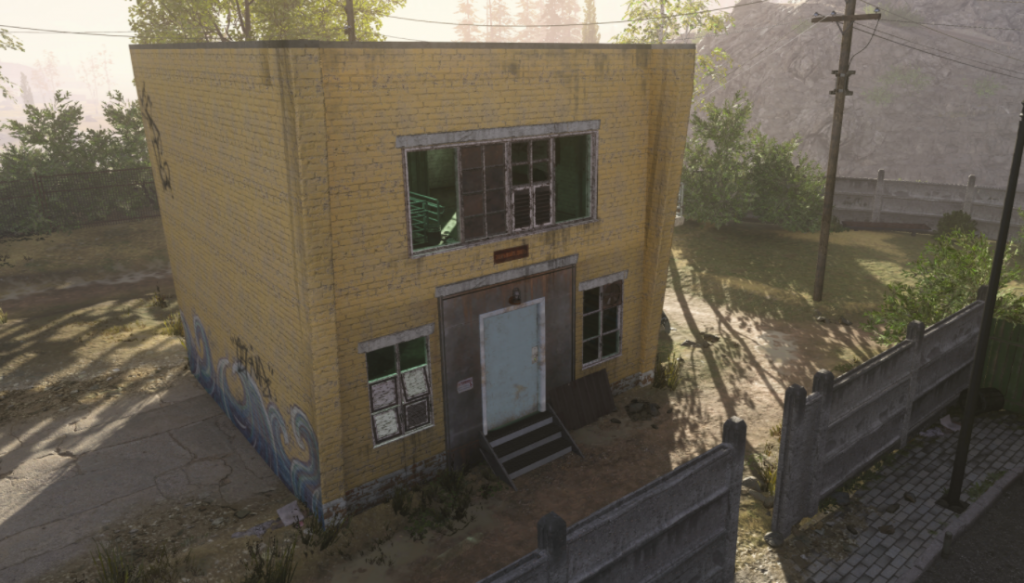 The Yellow Building is on the opposite side of the Parking Lot from the main building. Players can access the first and second floors of the building, and both provide vantage points. The first-floor window can cover the main window into the Atrium and prevent players from taking the outside Hardpoint.

The second story has two windows with better views into the Atrium. They can also be used to watch the Rooftop and Vent areas and lockdown the outside of the building. Players will eventually notice the glint of sniper scopes from this location, so prepare to be a target.

On the north side of the Parking Lot in Broadcast is a large open Space called Rocks. This area might seem barren and useless at first glance, but a few spots can help cover the building’s exterior. Near the wall closest to the Parking Lot is a stack of pallets that provide an excellent protected vantage point. Players can cover both floors of the Atrium, Rooftop, Parking Lot, and the other buildings from this location.

This area’s backside is also slightly raised, allowing players to cover the Atrium and part of the Rooftop while still being behind cover. However, this a more exposed area and should be used with caution.

Broadcast is a classic map that is fun in every game mode. Make sure to control key areas of the building to help your team secure an easy victory.