How to Play Brimstone 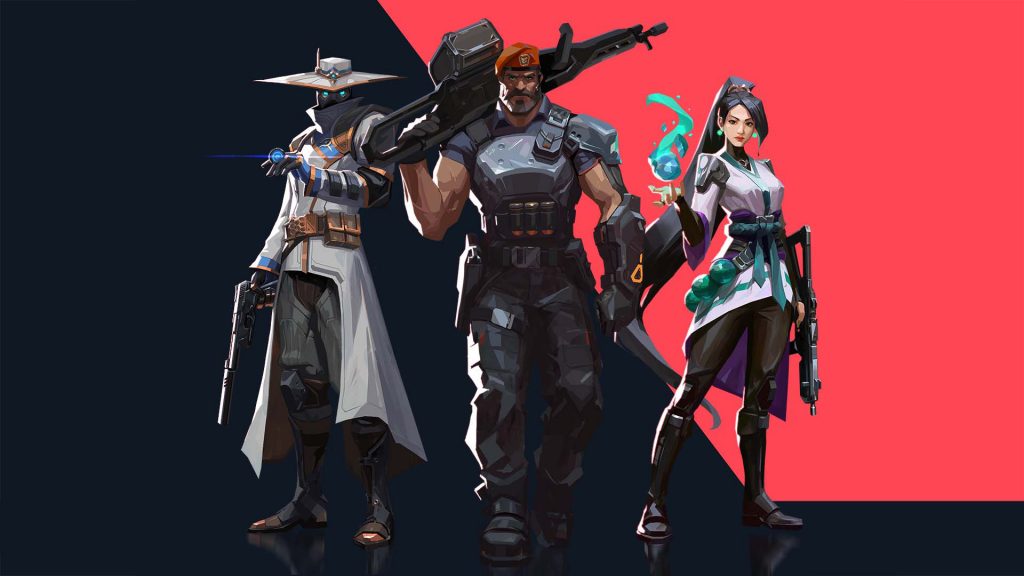 Brimstone brings utility to any VALORANT team composition, but he should be played as a front liner. (Photo courtesy Riot Games)

Design-wise, Brimstone is VALORANT’s take on a soldier themed character. Like Bangalore in Apex Legends, he possesses smokes to give his team cover and a large zoning air strike ultimate. Like Soldier 76 in Overwatch, Brimstone can support his team with a placeable beacon to give a tactical advantage. However, the way Brimstone plays around these abilities differs greatly from any of his thematic predecessors.

On the surface, Brimstone looks like a typical in-game leader type character. With his Sky Smokes being such great utility, a Counter-Strike style Incendiary Grenade, and a team-wide Stim Beacon buff, Brimstone seems like he would be a more tactical character. However, Brimstone is actually one of the most aggressive agents in VALORANT. Since most team comps contain valuable utility agents for late round like Sage, Brimstone can throw down all of his abilities quickly and try to find kills himself.

Smoke Your Way In 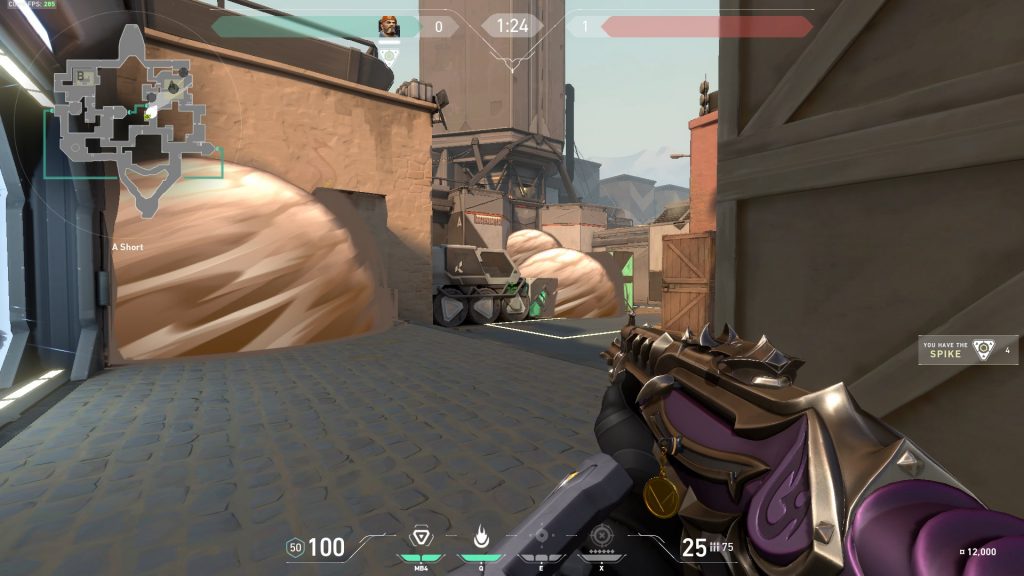 Brimstone’s Sky Smokes are excellent at giving his team a path to the site. (Photo courtesy Riot Games)

Brimstone’s signature ability is Sky Smoke. He gets one charge for free per round with additional charges costing 100 each, up to three max. Brimstone equips a map which allows him to place smokes within a large area around him. He can place all three at once, giving him the ability to block multiple angles at once.

On offense, Brimstone uses multiple smokes at once to give his team a path into bomb sites. Since the radius he can send them in is fairly large, Brimstone is able to throw them from safety. They can also be used to fake executes and block off specific angles for rotations. While saving one for post-plant can be viable on certain pushes, it is often best for Brimstone to make a decisive push and let Sage or Cypher handle the rest.

On defense, Brimstone can cycle the smokes in a single choke point to stall out attackers. He can also help out his teammates by blocking angles they are being pressured on. They also have value in site retakes. Smokes can be used to block off the spike from attackers or to throw on it for desperate defusals. Still, they can be pushed through at any point, so try and develop a feel on how to play around them.

Buff Up the Team 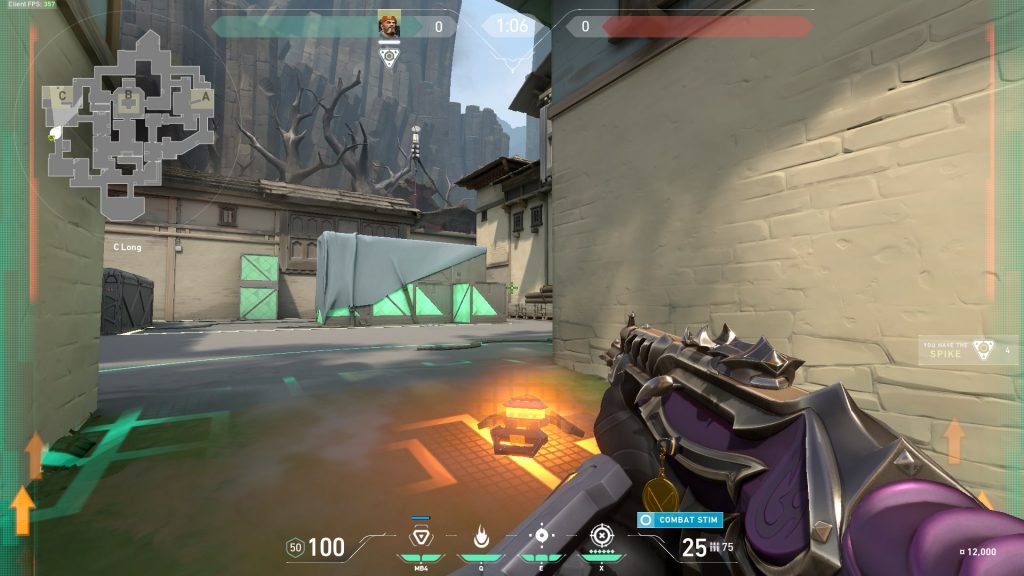 Brimstone’s first ability is Stim Beacon. Each one costs 100 with a max of two at a time. Using one throws a Stim Beacon in front of Brimstone in an arc. Once it lands, players in its area-of-effect gain the Rapidfire buff. Rapidfire grants:

You do not need line of sight with the beacon to receive the buff. The buff remains active for four seconds after the player leaves the zone. There is an internal cooldown so two Stim Beacon cannot be used in succession.

Stim Beacon is a very interesting yet straightforward ability. Throwing it down gives everyone who enters it the Rapidfire buff. It is most often thrown in front of the team going into site executes. Since it has a lingering effect, just walking through it is enough to give your team a firefight advantage. You can also throw it next to an ULTing Phoenix or a teleporting Omen to give them help in finding picks.

Using Stim Beacon on defense is much trickier, since you have to throw it before you get pushed. The best you can do is toss it down when utility starts coming in. If a different site gets taken, Stim Beacon can be used for retakes similarly to offense. One thing to keep in mind is that the borders of the Beacon circle can be seen by the enemy team. Be careful about revealing your position needlessly. 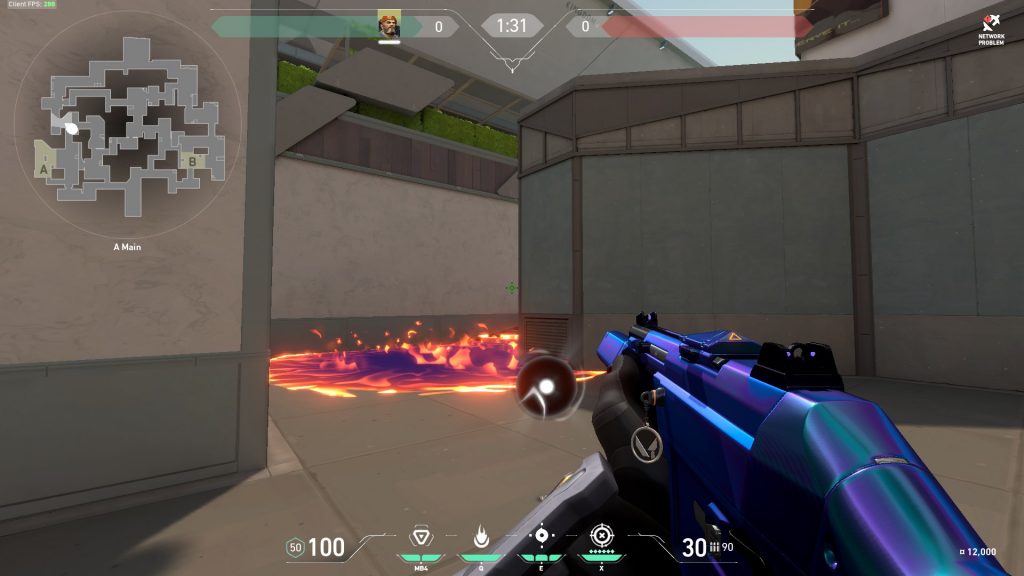 Incendiary can be used to clear angles and hold attackers at bay. (Photo courtesy Riot Games)

Incendiary is Brimstone’s second ability. Only one can be held at a time, costing 200. Brimstone equips a grenade launcher and on firing it, an incendiary grenade is launched in an arc. It can bounce off of walls and will explode upon reaching the floor. Incendiary only burns for five damage a tick, but it lasts for eight seconds.

This ability is as simple as it gets in VALORANT. It has pretty much all of the same applications as Molotovs in Counter-Strike. It can be used to clear corners, force players off of angles, stall pushes, and deny spike plants/defuses. One difference is that there is no limit to how far it can be thrown or bounced. Being able to throw Incendiary across the map could come in handy in helping your teammates.

Brimstone Incendiary has a purple tinge to its flames, differentiating it from Phoenix’s fireball. Incendiary does hurt you and your teammates, so be careful where you throw it. Additionally, it will make a sound whenever someone takes damage from it, revealing possible enemy locations. The biggest thing to be aware of when using Incendiary is the time it takes to use it. The animation to pull it out and fire it could get you killed if timed badly. Make sure to always pull it out first, then peek to shoot it.

Open Up the Sky 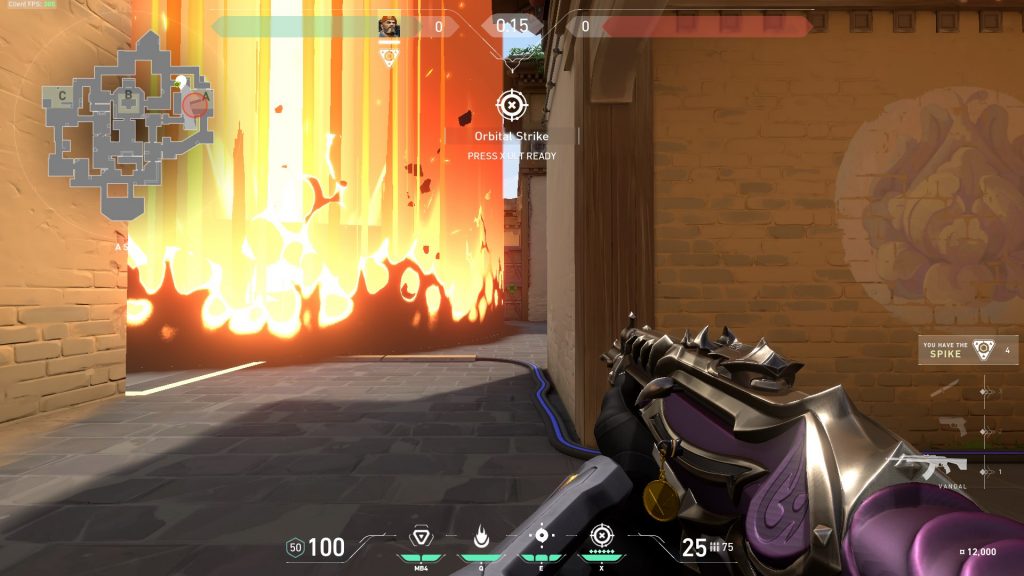 Orbital Strike is one of the most versatile abilities in the game. (Photo courtesy Riot Games)

Brimstone’s Ultimate is Orbital Strike. This strong and versatile ability only requires six ultimate points to cast. Brimstone pulls up his map to choose an area to fire an Orbital Strike laser. The strike begins after a short delay and deals 20 damage per tick. Enemies caught deep inside it will almost always be killed. Just like with Sky Smokes, Brimstone can cast this ability within a large range of his current location.

Orbital Strike has already seen a variety of uses within the meta. On offense, it can be used to clear out a large area of a site during an execute. It can also be saved for post-plant to deny rotators access to the spike, or to stop defenders from defusing the spike itself. On defense, a well-timed Orbital Strike can obliterate an enemy push through a choke point. If Brimstone isn’t there in time to stop the entry, he can use it to stop a spike plant or to flush attackers out of post-plant positions. There is almost always a use for Orbital Strike, but you must use information from your team to make sure it hits true.

Lastly, Orbital Strike also damages you and your teammates. Make sure the area is clear of friendlies before you make it rain.

Brimstone is a very powerful frontline agent. His ability to throw down his utility and be the first one in a fight make him a key piece in any attack. He’s no slouch on defense either. Brimstone can cycle smokes and provide aerial strike support to any site under attack. At the head of any successful VALORANT team is a confident Brimstone leading the way.