How To Play Bot Lane In League of Legends 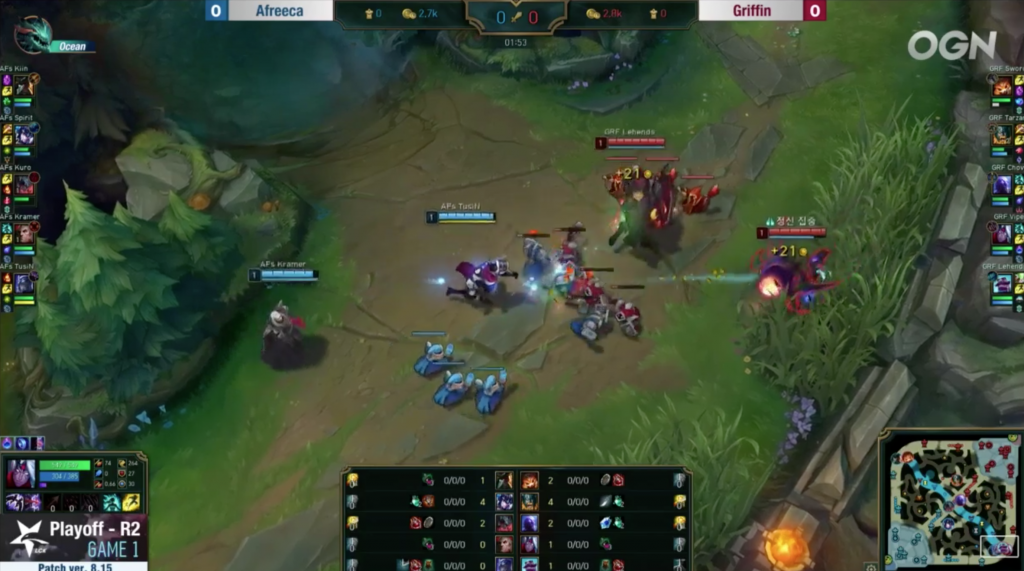 Bot lane is a role so important to success that they have a dedicated support champion to protect them in lane. Although often synonymous with AD carry, bot lane also allows for ranged mage carries as well. What follows is what you need to start crushing bot lane in your games.

Bot lane and AD carry are often used interchangeably, so the majority of bot laners are marksmen champions. This is because marksmen scale better with gold and items than tanks and mages. Marksmen are also better equipped to fight while under-leveled than tanks and mages. They are then placed in bot lane because the support lanes with them and it is the nearest lane to the first big objective, an elemental drake. Objectives are easier to do with more ally players in close proximity.

Ranged mages are now being seen more often in bot lane. Marksmen have seen a resurgence in the jungle, allowing mages to be taken in place of an AD carry bot. These mages often have crowd control and work well within combination with a crowd control-heavy support champion.

Bot laners have a number of choices for summoner spells. As with most every role, all bot laners will run Flash. The second summoner will most often be one of Teleport, Cleanse, or Heal. Teleport allows for bot laners to get a good recall timing with their first few item spikes. Cleanse is great for immobile champions against teams with many forms of crowd control. Heal is great in the duo lane because it heals your champion and a nearby ally champion. Heal also provides a brief move speed boost to get out of trouble.

Bot is a 2v2 lane, so you will need to keep track of auto attack ranges for two enemy champions. This is also true for enemy spells. The three pieces of information you must keep track of for spells are range, cooldown, and whether or not the spells pass through minions.

Keeping track of both auto attacks and spells for two enemies can seem daunting. Fortunately, you have a support to help you trade back against the enemy bot lane. Try to play off of each other as best as you can. For example, walk forward and trade when your support is in an aggressive position to help out. When your support is low on health, it may be time to back off and concede lane position.

There are pros and cons to having two players on each team in bot lane. On the plus side, you have two sets of Warding Totems to use early to prevent ganks. Being well-coordinated with your support allows you to have better vision coverage than any other laner early in the game. A support is also always expected to have a Vision Ward ready and on the map, starting from their first recall to base.

On the flip side, two enemy laners means the enemy will have great vision around the lane as well. It is tough for either jungler to make it bot unseen until Vision Wards and Oracle Lens are purchased and used.

Bot lanes are targeted for ganks by mid laners and junglers because the potential reward is greatest in bot lane. The most obvious reward is that there are two potential kills to be had. Bot laners share experience and are typically under-leveled compared to the rest of the champions, also making them easier to kill on ganks. Bot turrets are weaker early as well, so grouping bot lane can result in securing turret First Blood.

Bot laners will often swap to a Farsight Alteration as the game progresses. This is because bot laners are typically too weak to face-check brushes themselves and want to be able to supply vision from a distance.

A crucial moment very early in the game is the race to level 2 in bot lane. Assuming both champions are in experience range, killing the entire first minion wave and then the three melee minions on the next wave will allow both champions to hit level 2 at the same time. Hitting level 2 before the enemy allows your lane an additional two spells over your enemies. This makes an all-in or great trade possible.

It is important in bot lane to make sure you don’t leave your turret unattended with minion waves for long. Two champions attacking the turret adds up and bot turret can fall quickly. As mentioned, the bot turret is also weaker earlier in the game than the other turrets on the map.

This also makes pushing the wave a great strategy bot lane. Shoving the wave makes the enemy have to attend to the waves or risk losing large chunks of damage to their turret. Additionally, it stops the enemy support from being able to roam around the map freely. If the enemy bot laner is alone, you can punish him by letting your minions crash into the turret and diving him 2v1.

Given the risk in leaving lane for too long, bot laners often wait until a major item purchase can be made to recall back to base.

In lane, Flash should be used offensively to secure a kill or defensively to prevent a death. As the game progresses, Flashing forward to pick-up a kill is oftentimes not worth it as a bot laner. Bot laners are usually under-leveled from sharing experience in game, making them easy to kill. Bot laners also are a big damage threat on the team and that makes you a target for the enemy team in fights. Saving Flash for defensive uses later in the game is often more practical.

Teleport is used to get off a great recall as a bot laner. As mentioned, bot laners can be punished heavily for having to go back to base. The enemy can push the turret with two or more champions and take it down quickly. Bot laners are also very reliant on items and thus want to get their big purchases as soon as possible. Using Teleport after you go back to base for a major item purchase alleviates these concerns. It also allows you to then push the minion wave if the enemy also recalled. This way you can get your perfect recall off successfully and punish the enemy for taking one themselves.

Heal is the predominant defensive summoner spell for bot laners. The ability to heal your support in addition to yourself separates it from other defensive spells. Heal should be used when either you or your support are getting too low in a fight. Preferably, you can hold it until Heal will help both of you, but you never want to let your support die to try to maximise the value. Heal can also be used as an escape tool for its movement speed. This can allow you to save Flash, a longer cooldown spell, in some cases.

Cleanse can be important in bot lane if the enemy lane has the ability to chain crowd control spells together. If the enemy has two forms of crowd control, use Cleanse on the first to hit you. Casting Cleanse grants 65% Tenacity for 3 seconds, meaning the next crowd control to hit you will be reduced. Cleanse will also get rid of an enemy Ignite or Exhaust used on you.

Layering crowd control can make a good trade a great trade in bot lane. If your support hits a crowd control on an enemy, wait until that crowd control effect is about to expire before using your own. This way you maximize the time the enemy is crowd controlled.

Given bot lanes proximity to dragon, it is important to help make sure your team has vision on the early elemental drakes. Use your Warding Totem or ask for your support to place a Vision Ward in the pit when you lack vision.

Clearing the wave quickly allows you to take an aggressive trade on the enemy bot lane. Coordinate with your support to attack and use low cooldown spells on waves to get the faster push.

Make sure you are keeping track of what summoner spells the enemy bot lane has up. You must be aware of four spells at all times instead of only two.