How to Play Aghanim’s Labyrinth 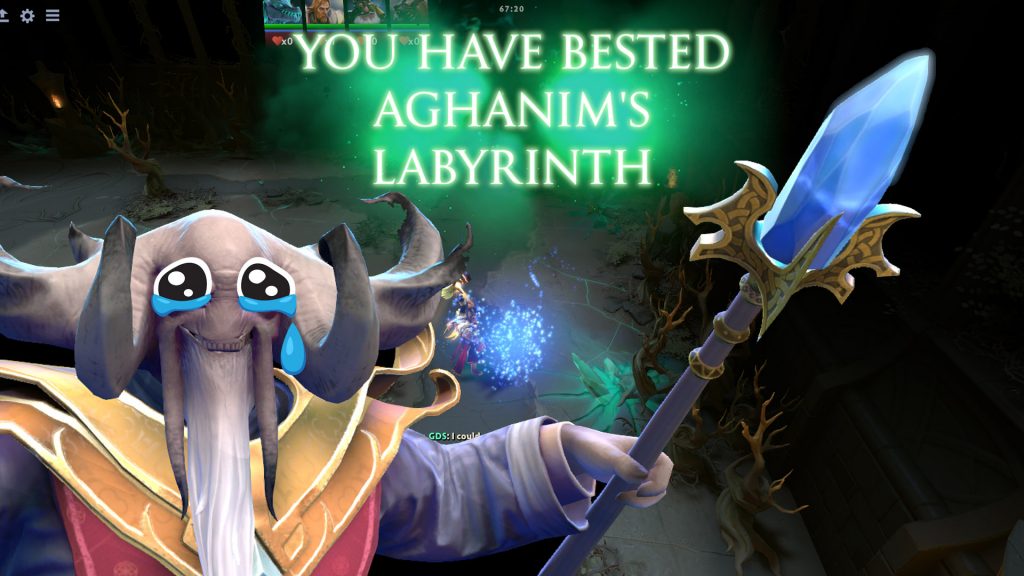 Dota 2's summer event is here in the form of a fou-player dungeon co-op.

Aghanim’s Labyrinth is one of Valve’s best events yet, and this guide will allow you to fully enjoy it without spending hours banging your fists in frustration. Plus if you realize it’s your jam, then you can partake in the weekly global leaderboards.

Aghanim’s Labyrinth is a four-player co-op dungeon crawler event where you work your way through a mix of combat, carnage, boss fights and bonus levels. You will need to complete 17 rooms in the Labyrinth collecting Aghanim Shards to reach the final boss, Aghanim himself.  There are a total of 54 possible rooms you can face, which include six Boss levels and five Mini Boss levels.

Typically each round you will choose between two randomly selected rooms by channeling one of the two Outposts. Clicking on the Outpost will tell you which room it is linked to, and the icon above it will tell you what the reward is for completing it. (Gold, Treasure or Lives) Each time you must face a combat room, there is a chance for an Elite Outpost to appear, giving you the option to face a tougher enemy but for greater rewards.

Rooms are randomized but the type order remains the same: 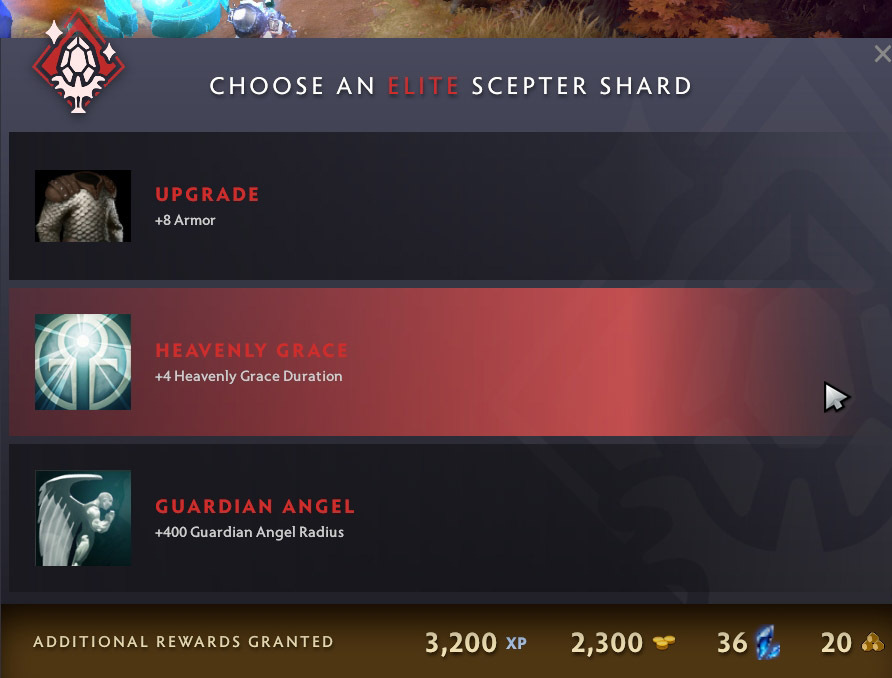 On completing a room you will be able to bestow one of three buffs on your hero. The strength of the buffs available depends on the type of Shards you collected from the room; Common, Elite or Legendary. Sidenote: These Shards can also later be spent outside of the game on a skill tree if you own the TI10 Battle Pass.

You can check the scoreboard to learn what upgrades your team-mates chose. (Photo courtesy Valve)

Each player starts Aghanim’s Labyrinth with two additional lives which do not reset after completing a room. If you are killed with an additional life, you will respawn in the room where you were slain, and are invulnerable for several seconds after respawn. This is particularly useful to know when it comes to the Maze/Trap levels. If you die and have no remaining lives but your team-mates still complete the room, you will respawn afterwards.

Additional lives can be bought for 1000 gold from Bristleback, who can randomly appear next to the shopkeeper. So it’s a good idea to keep at least 1,000 gold spare if you’re out of lives.

Important: The number of extra lives available does refresh but the pool is shared between all four players, so don’t get too greedy. 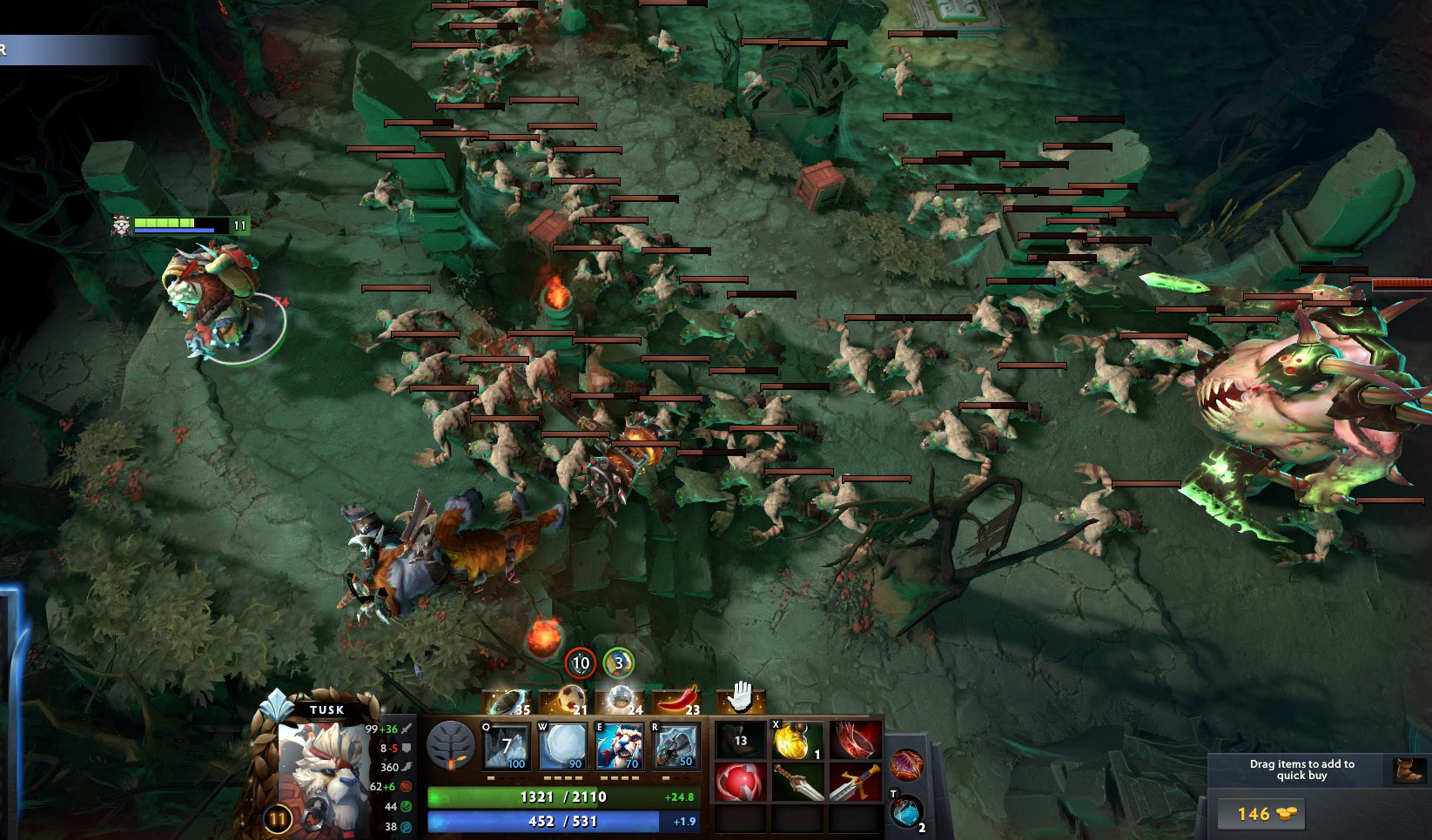 Don’t let this happen to you, pick the right heroes. (Photo courtesy Valve)

What Heroes to Play

Although all heroes still have their basic abilities from the traditional game mode, 15 unique buffs to those skills can be unlocked by completing rooms in Aghanim’s Labyrinth. Each basic skill has three to five possible upgrades and all Ultimates have three. Some heroes can even gain access to a new fifth ability. For example, Magnus can obtain Reverse Reverse Polarity (blasts enemies away) while Omniknight can unlock Personal Savior (single target Guardian Angel).

You might initially be tempted to simply pick Tusk because you love him dearly – as I did -, but realistically certain heroes are just infinitely better. 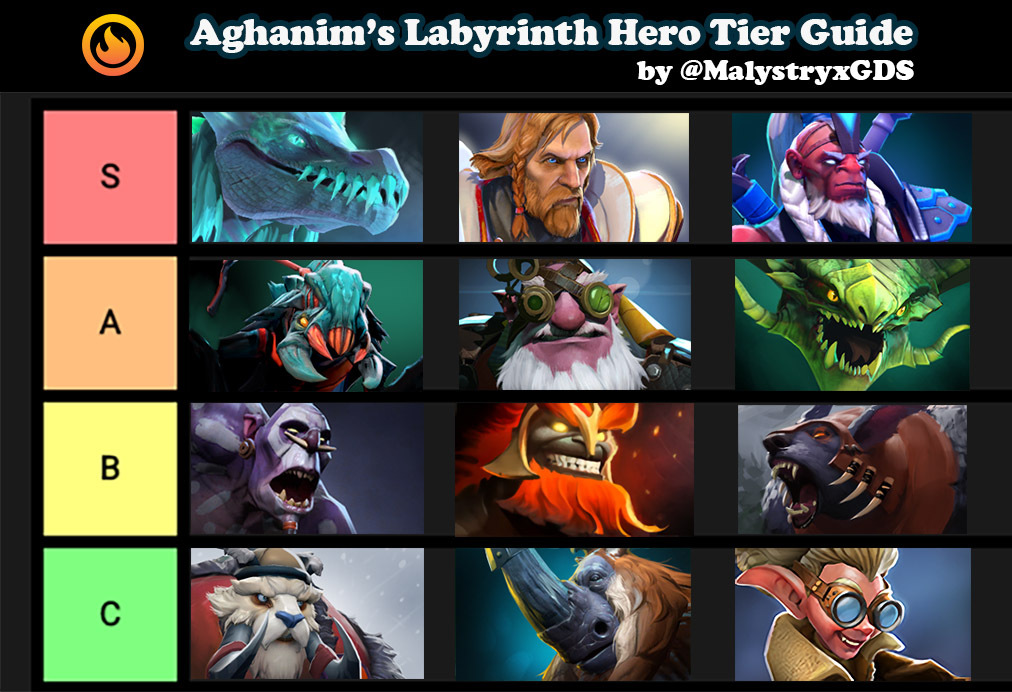 If you opt for Omniknight, Winter Wyvern and Disruptor you’ll already have an incredibly solid foundation to take down Aghanim. They’re so good in fact that your 4th hero can be assigned to your weakest party member, and you can let them play what they like.

No other hero in the pool is as good as Omniknight at taking a beating or keeping his team alive. Even before upgrades you have three saves in Purification, Heavenly Grace and Guardian Angel. While the likes of Disruptor and Winter Wyvern do rely on you getting a bit lucky to get the best ability buffs, Omiknight’s options are pretty great across the board.

While you may not be your team’s DPS, you will be their lifeline, and in many comps you might well be the only melee hero. Perks that can become available to you will allow for Purification to have two charges (Benevolence), become an AOE heal (Holy Place) or have a 50% chance to cast twice (Blessed Curse). Meanwhile, Heavenly Grace is even more of a clutch spell thanks to the potential to upgrade it to block five instances of damage (Zeal) and knock enemies back 400 units (Judgement).

Overall it means Purification and Heavenly Grace are powerful enough to save two separate targets, and when the chips are down you have Guardian Angel.

Side-note: The Condemnation upgrade for Degen Aura that deals 25% of your base damage as AOE is brilliant for the chicken level. The chickens will run all over the place but drop gold on receiving any instance of damage, and Condemnation will allow you to cash in upwards of 3K gold easy.

Your goal: Buff Guardian Angel whenever you can, focusing on upgrades and reducing it’s cooldown and duration (don’t bother about increasing range). If the stars align you will have a chance to get Angelic Flight perk, which gives Guardian Angel 30% magic immunity (was 100% before the patch) + flight for its duration. This is still filthy good and great for giving your team a chance to reposition, especially if you knock down that cooldown time. Remember that ultimates reset after every room, so there’s no reason to not use Guardian Angel at least once per round.

Your build: You are the designated Aura carrier. Get a Vladimir’s Offering early on for the shared lifesteal, and then build Guardian Greaves, Assault Cuirass and then Octarine Core to drop the cooldown on Guardian Angel. If you still have money in the kitty then opt for a Spell Prism for further cooldown reduction.

Winter Wyvern, unlike Omniknight, is a must-have because of one particular ability. No, it’s not Cold Embrace but, in fact, Arctic Burn. This is your bread and butter and if, heaven forbid, Aghanim steals it during the final fight, kill the blue shards surrounding him ASAP to get it back.

Arctic Burn let’s you fly, meaning on some levels you can abuse high ground to obliterate enemies from safety. You can also smash down the cooldown on Arctic Burn to essentially give you permanent flight. This in unison with increased vision also makes taking on enemy mobs one-by-one much easier. There are two upgrades that make Arctic Burn incredibly powerful and these are the reason Winter Wyvern is a must-pick.

Arctic Splash damages enemies in a 175 radius around your target while Winter’s Breath allows attacks on up to four targets within range. Insta-pick these upgrades and you will be a killing machine against swarms of enemies all thanks to a single ability, Arctic Burn.

That’s not to say Cold Embrace isn’t useful. It is of course a save for yourself or your ally, and if you can get the Diamondize upgrade it will grant magic immunity. That’s four seconds of invulnerability. Winter Wyvern’s Winter’s Curse ultimate is underwhelming in Aghanim’s Labyrinth outside of the double Alchemist room, so focus on upgrading her basic abilities instead.

Your goal: Pick any upgrade that reduces Arctic Burn’s cooldown or increases its flight duration. Winter’s Breath & Arctic Splash upgrades are top tier, as is Chilled to the Bone for Splinter Blast which adds secondary targets to the ability. In this mode you are not a support, you are pure DPS, a right click hero. Do keep an eye out to save someone with Cold Embrace but your focus is killing everything that moves.

Your build: Power Treads first for the stats and then go for Bloodthorn for the attack speed, int and silence. Next is Monkey King Bar for the bonus magic damage and extra attack speed. Now you’re attacking fast, you’ll want to be hitting hard so build a Daedelus. Depending on how you’ve done purchasing lives and on the bonus levels you should have enough for one more item. Go Defensive just to be safe, so a Eul’s Scepter or Force Staff as mobility is crucial at the higher levels. 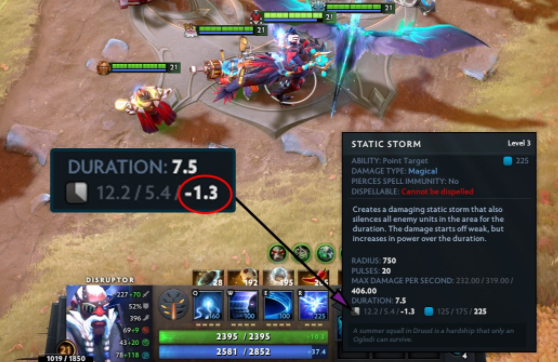 With the right upgrades you can have a zero cooldown on Kinetic Field and Static Storm.

Disruptor, along with Winter Wyvern, was hit by Valve nerfs a few days after the launch of Aghanim’s Labyrinth but he remains a hot pick. While Omniknight’s specialist is sustain and Winter Wyvern pure DPS, Disruptor task is magic damage and control.

Static Field is a godsend in this mode as you can manipulate the flow and area of combat, and several upgrades available have turned it into a game changer. The Ring-ception upgrade creates a secondary larger Kinetic Field around your first, keeping mobs and bosses at arm’s length. Meanwhile Stay in the Zone buffs the attack speed of allies in the field by 60.

Area of Bliss, which now heals 50% of Disruptor’s intelligence instead of 4% of max HP after the patch, remains another juicy upgrade. In this mode it’s easy to be overwhelmed, especially in combat levels where enemies spawn endlessly until you kill buildings. Disruptor is the master of chill and incredibly fun to play in Aghanim’s Labyrinth.

Your goal: Your goal is to dish out copious amounts of magic damage while dropping as many Kinetic Fields as humanly possible. Max the duration and cooldown of the Kinetic Field through upgrades because this is your strongest ability in the Labyrinth. With enough buffs you will be able to get perma Kinetic Field. Also look out for the Field of Dreams upgrade for your Static Storm ultimate which grants a 30% chance to deal a 150% critical strike.

Your build: Veil of Discord is a must and from there you’ll want to get your team a Bloodthorn. In order to maximize Kinetic Field spam your big item is going to be Octarine Core for the cooldown. Next you have a choice. You could go Kaya/Yasha if you need more speed or Kaya/Sange if you want to tank up. Finally you’ll want to invest into a Eul’s Sceptre. The final boss of the game Aghanim will steal a spell from each of your allies after channeling, and a well timed Eul will make you untargetable, meaning he won’t be able to spell steal if you get it right.

It’s important to remember that there is a chance that certain heroes don’t manage to get the perfect upgrades due to RNG. That said when it comes to your 4th hero you can be flexible. Popular picks at the moment are Viper due to his ability to reduce magic resistance or Sniper for the long range DPS. The Armour Piercing upgrade for Sniper’s Take Aim is especially potent as it reduces armor by six and opens up the way for a build that capitalizes on it with Desolator and Solar Crest. Another growing hero trend is Weaver, primarily because he can be built for DPS but also because of his perks that grant him lifesteal, a full/mana heal and the option to grant Time Lapse to allies.

Aghanim’s Labyrinth is set to run all summer and we’ll be posting more guides as the weeks progress. We hope this guide will secure you the first kill of many on the Apex Mage Aghanim.