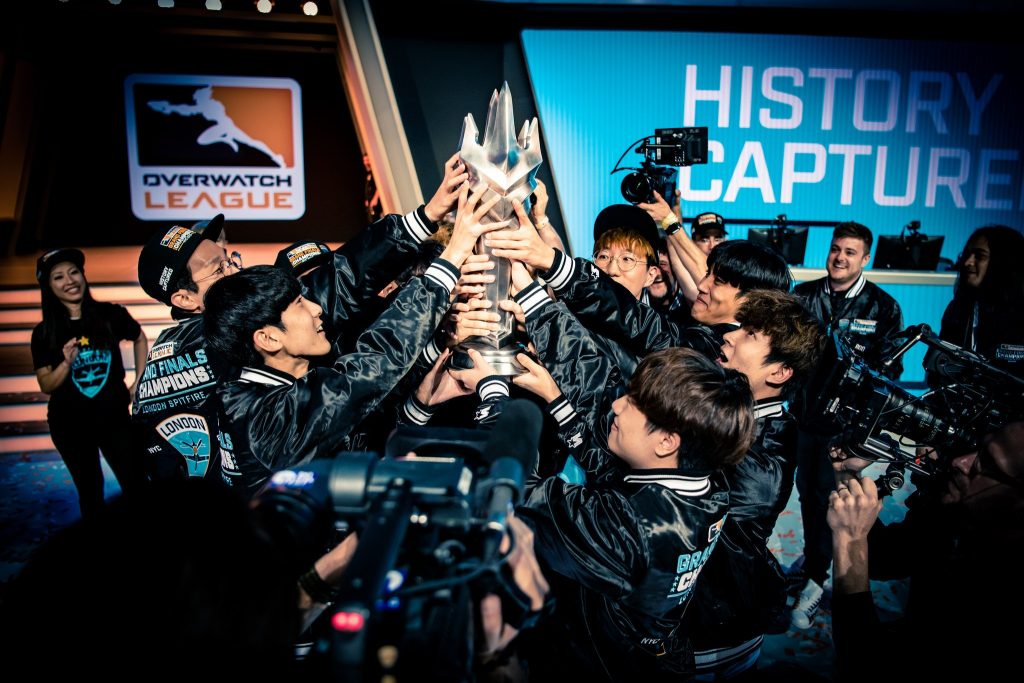 Winning tournaments isn't a significant source of revenue for esports organizations, but it can motivate more merchandise sales. (Photo courtesy of London Spitfire/Cloud 9)

The short answer is…they don’t, at least from a profit perspective. That is the reason for the massive funding rounds like Cloud 9’s $50 million Series B in October. Esports organizations are operating in a world of future returns. The major organizations keep massive rosters to have a presence across the esports world.

Cloud 9, for example, has 96 listed players/coaches/general managers across 12 different esports titles. Esports organizations are effectively start-ups. Investors see the potential growth of esports and are sacrificing short-term profits to help organizations grow and cash in down the road.

But even though esports organizations aren’t turning a profit, they are still bringing in cash through different channels. Esports revenue is growing at a considerable rate with 2019 projected to be the first year to top $1 billion in global revenue according to a report by Newzoo.

As you can see from that graphic, the vast majority of esports revenue comes from what Newzoo calls “Brand Investment.” That encompasses media rights, advertising and sponsorship.

It’s also important to note that is the total esports revenue and a lot of that revenue is headed towards the leagues. For example, the Overwatch League is receiving $45 million per year to broadcast exclusively on Twitch, and that money is not going to esports organizations. Sponsorships and advertisements, however, are a crucial part of esports organizations revenue streams.

They are on jerseys and streams, at events and photo shoots. Sponsors make up the largest portion of that $1.1 billion – encompassing $456 million.

Major non-endemic brands are entering esports every month. Brands in every sector from fast food to athletics apparel are involved in esports. Some brands are focused on the events and leagues like Nike’s massive four-year deal with the League of Legends Pro League. Other brands are focused on individual players. Red Bull’s deep partnership with Ninja is a great example as the brand has done well to capitalize on his massive audience.

Esports are the talk of boardrooms around the globe. Executives see an opportunity to connect with a young, hard-to-reach audience and are clamoring to throw their money at esports. For organizations, the goal is to convince brands that their players and teams are the ones that can drive the most engagement to that brand.

One of the most successful organizations at this model has been Team SoloMid (TSM). Built from a League of Legends community website, TSM has become one of the largest esports organizations in the world. They are also one of the only orgs to be cash-flow positive. The key for TSM is content. Here’s Devin “Mylixia” Nash, the ex-CEO of Counter Logic Gaming, explaining what makes TSM successful:

Nash knows that content is king. While the sponsorships are the beginning of a lucrative relationship, it’s the continued ad presence that hammers home the value to the brand.

Having valuable ads requires an esports organization creating content viewers want. A large part of that is through Twitch. Many esports organizations require their esports players to stream and they also have a dedicated section of streamers who don’t ever compete. That’s what Nash is referring to when he says they make money from being a “talent agency.”

How esports organizations market their players and attract brands authentically is crucial to their success. Looking at TSM, a great example is their partnership between their League of Legends team and Dr. Pepper.

Dr. Pepper has a long history in esports/gaming with partnerships dating all the way back to MLG in 2008. As such, they know how to get a good response out of the esports audience and can serve as a case study for other brands who want to get involved. In addition to the Team SodaMid ad, Dr. Pepper also received a lot of press by featuring TSM Fortnite players on bottles of soda.

TSM’s skill as a “talent agency” was on full display with the rise of Fortnite. They were one of the first organizations to capitalize on the game. Five of their streamers are in the top 22 in hours watched for Fortnite over the last month. Right now, Dakotaz is in the top five but Myth and Daequan have also spent time at the top of the leaderboard over the last year. HighDistortion and Hamlinz round out the five and make TSM’s streamer group the most successful across all of Fortnite.

Their success comes down to identifying an opportunity and seeing what content creators are poised to capitalize on it. That is how to bring in ad revenue as an esports organization.

Media rights, which make up nearly 20% of all esports revenue, run almost exclusively to the game developers and third party tournament organizers.

Here is the total breakdown of the $1.1 billion that esports companies brought in over the last year. The year-over-year increases for each category except game publisher fees show the growth of the industry and why investors are jumping at their chance to get money into esports through various forms.

At just over $100 million in revenue, merchandising and ticket sales don’t occupy the same role that they do in traditional sports. For the big sports venues, tickets are their key revenue stream that consistently pays out. In esports, not so much.

Giving esports organizations the ability to sell tickets is one of the main reasons why the Overwatch League has been attractive to esports owners. Even with the high entry fees to play in the OWL, the proposition of going to home stadiums by 2020 is enticing. The logistics of that arrangement are still up in the air but OWL commissioner Nate Nanzer has confirmed that plan is still in place.

Beyond the physical venues, esports organizations have been successful at selling their merchandise. One organization that has made that a pillar of their business is 100 Thieves.

Founded by Matthew “Nadeshot” Haag, 100 Thieves has brought in a lot of outside money, including household names like Drake. Part of the reason Drake became invested was because the company has done well to make itself a name in the streetwear fashion world. With sweatshirts that sell out immediately, they’ve built up fervor around new product releases. Their clothes have been seen on America’s trendiest stars from NBA players to rappers.

The Future of Esports Revenue

While the numbers in the revenue columns are impressive, it is the growth numbers that investors are focused on. Newzoo’s $1.1 billion prediction for 2019 revenues represents a staggering +26.7% year-over-year.

If that growth can continue – and it seems likely that it will – esports organizations will be profitable in the near future. The move of Overwatch League and the Call of Duty World League to franchised cities will open up the key ticket revenue stream for many esports organizations.

New brands are pouring into esports every week. On March 22, Nissan announced a jersey sponsorship with FaZe Clan and OpTic Gaming. It is Nissan’s first sponsorship of esports and represents another major brand that sees an opportunity in the industry. More competition among brands for esports sponsorships will raise the value of those sponsorships to the organizations.

Another big opportunity for esports is linear television. The OWL is experimenting with broadcasting games on ABC, a huge opportunity for advertisers to target the esports audience through a medium they may be more familiar with, compared to online streaming. If brands see linear esports ads as successful, it may be the push they need to get into online events or esports sponsorships.

All these changes are fueling the growth of the esports industry and making bottom lines across the industry healthier.

Counter-Strike: Global Offensive Dota 2 League of Legends Other Overwatch
Share
Mitch comes from a background in sports broadcasting at the University of Oregon, while there he competed for the U of O Hearthstone team and saw the potential for content at the crossover of sports and esports. In addition to Hotspawn, Mitch writes for SportTechie and the National Football Post. Follow him on Twitter @Mitch_Reames.
Follow me