Hail to the King: How to Play Wraith King in 7.25b 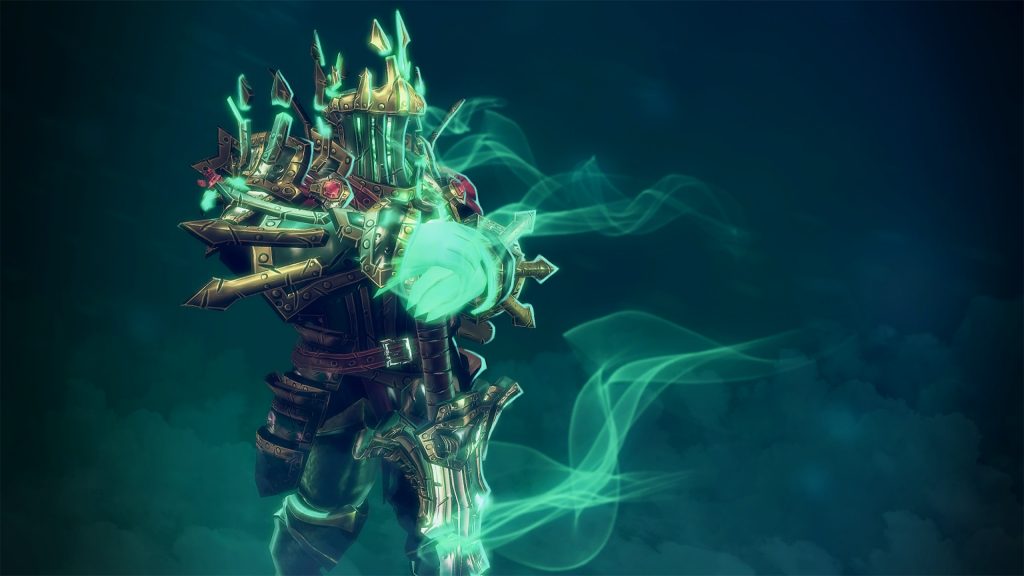 Wraith King has an easy to execute gameplan and is able to farm at a blistering pace. (Photo courtesy Valve)

Wraith King is the one of the best carries in Patch 7.25b. He is currently sitting on a whopping 55.6 percent win rate overall according to Dotabuff, and is consistently within the top 15 most popular heroes right now. And although his win rate is more balanced in the Divine and Immortal brackets (around 51 percent), pro players like Arteezy have been using him to great effect at the highest levels of public matchmaking.

In fact, Arteezy has been popularizing a rather unorthodox skill build for Wraith King lately. When we say “unorthodox”, we mean that players in the lower ranks of matchmaking wouldn’t even look at the skill build twice, in fear of getting flamed by their teammates for it.

We’re talking about the skill build that skips Wraithfire Blast (Q) entirely in the laning phase, and investing those points into both Vampiric Aura (W) and Mortal Strike (E) instead in order to farm extremely quickly. This build focuses on getting big real fast, putting the enemy team on a timer and becoming an unkillable monster in the late game.

Read on to find out how to unleash Wraith King’s full fury on your opponents!

Before we get to the build and how to play it, it’s important to look at why Wraith King is just so good in the current metagame. Thankfully, this is easy to explain, and ties right into why Vampiric Aura and Mortal Strike are the focus of the build.

Vampiric Aura was reworked slightly in 7.23, which was released in November of last year. It still gives Wraith King and his allies passive lifesteal in its current form, but it now has an additional component that is just as important: it gives a small amount of bonus attack damage. For Wraith King’s allies this is almost inconsequential, especially after considering that at max level it only gives 24 damage.

But in 7.25, this changed significantly. Wraith King now gets a multiplier of 1.5 times on Vampiric Aura, for both lifesteal and bonus attack damage. This is big in the laning stage in particular, which happens to be when Wraith King is at his weakest. The boost in attack damage adds up quickly, particularly when Vampiric Aura hits level two—which grants a staggering 18 bonus damage in the early game. Coupled with the lifesteal, the new Vampiric Aura patches up Wraith King’s weakness in the laning stage.

As for Mortal Strike, it has remained largely the same for a few major patches now, but it is still what makes Wraith King such a beast at farming. Maxing it out first allows him to summon more skeletons earlier in the game, which help clean up neutral creep camps in the jungle or take down towers if Wraith King is left to his own devices.

When put together, the buffs to Vampiric Aura and the cheap cost of using Mortal Strike skeletons make the laning stage a lot easier for Wraith King. Keep this in mind throughout the guide.

Right then. With the prelude out of the way, the build is very simple. Skip Wraithfire Blast in the laning stage because it’s pretty worthless compared to the other two abilities, and focus entirely on those. You’ll want to start with Vampiric Aura at level one, as it is very potent when paired with a Quelling Blade.

Depending on your starting items, you will have anywhere from 65-75 attack damage to start with—which is crazy high for a carry that just wants to farm creeps and do nothing else. Last hitting will be a cinch with that kind of power, but as always you’ll want to exercise due caution and stay back as necessary.

When we say focus entirely on Vampiric Aura and Mortal Strike, by the way, we mean it. Leave Reincarnation alone until you hit level nine, because each point in your two passives is extremely valuable. You shouldn’t even be fighting that early anyway, which means you aren’t likely to die. Being away from danger means you don’t need Reincarnation. Simple.

The farming loop is equally simple. Get as many last hits as you can in the lane, powering up your Mortal Strike as you go. If possible, push the wave towards the enemy tier 1 tower, so you can transition to the jungle in peace. Leverage your strong attack damage and lifesteal to keep yourself alive while jungling, and use Mortal Strike skeletons to accelerate your farm.

Your item progression, as expected, is also elementary. Generally speaking you’ll want to get Phase Boots as your shoes of choice, because Wraith King needs the extra movement speed and the armor from the Chainmail component. Yes, he is a strength hero which means he has a lot of health to work with naturally—but you get more effective HP with armor items in tow.

Gloves of Haste also has a ton of value naturally, and more so on Wraith King. We recommend purchasing one before completing your Phase Boots, since it only costs 400 gold and gives you a significant DPS increase for just that much.

Radiance is still the core item of choice, as Wraith King is naturally tanky and Reincarnation allows for even more Radiance burn damage in teamfights. It also serves to accelerate his farm, the same way it does for someone like Spectre.

Once you get your Radiance, you’ll want to use it to farm yourself a Black King Bar. As a slow, lumbering melee hero, Wraith King is extremely easy to kite with stuns and slows—and BKB solves this problem while also giving him extra points in strength. From there, you can tailor your item build to fit your draft and to counter that of the enemy team.

We do have general recommendations, though: Assault Cuirass greatly increases your attack speed and helps your team tank up, Basher into Abyssal Blade allows you to lock targets down for a long time when combined with Wraithfire Blast, and Blade Mail helps against teams with plenty of uncontrollable damage output. But Radiance and BKB will suffice in most games, allowing you to immediately push the tempo and end the match before harder carries can catch up.

And that’s it really. If you can keep your farm up throughout the laning stage and into the mid game, there is very little that the enemy team can do to you without sacrificing plenty of cooldowns just popping your Reincarnation. All the while, you’re dealing Radiance burn damage, and critting heroes for 700 damage or more. Your health will also always be topped up thanks to the lifesteal.

You also split push insanely hard thanks to your skeletal summons. If the enemy team is constantly fighting your teammates on the other side of the map, abuse this as much as possible in order to force a TP or any sort of reaction. Your teammates will love you for it.

As you can see, Wraith King’s gameplan and execution are both laughably easy. Just keep it tight, focus on farming, and mute the teammates that will inevitably insult you for not getting your stun in the laning phase. If you get your Radiance earlier than most, you will gain some free MMR.

Sounds great, right? Now go hit the ladder and unleash the undead upon your enemies!