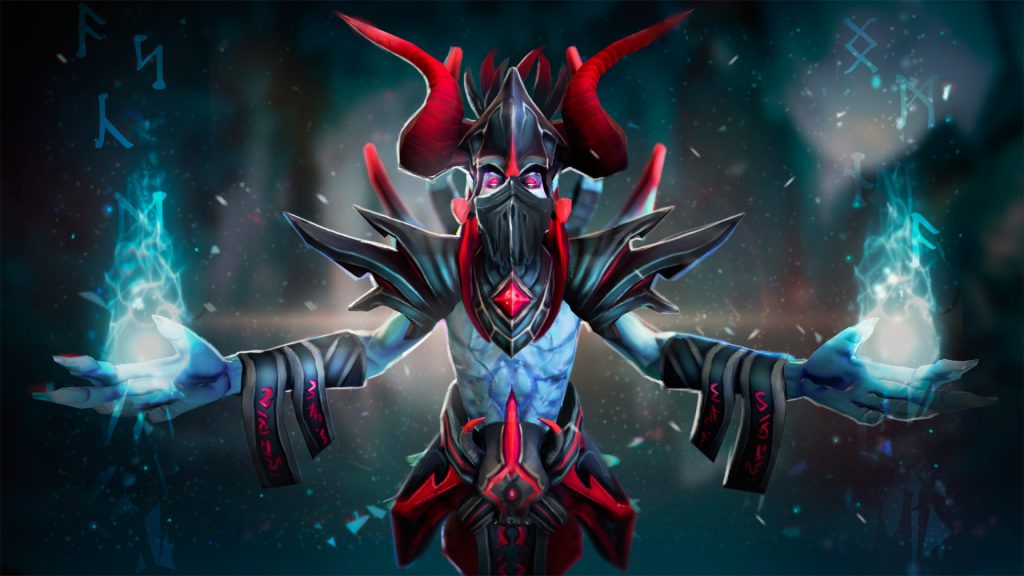 Lich is dead simple to play, and can be placed in almost any draft. (Photo courtesy Valve)

Ever since Valve introduced the revamped role queue in the middle of 2019, players have been forced to play both support at least once every fifth game. This new system was implemented in order to greatly shorten queue times in ranked public matchmaking, and to lessen the supposed disparity between the number of players who queued solely for core roles and those that were willing to sacrifice for their teams by playing support.

While this was presumably a necessary change in order to just straight up get more people to play support, core role spammers were likely incensed at the adjustment—thinking that it was as if Valve was telling them that they could not spend their time in Dota 2 as they pleased. Regardless of anyone’s opinion on the system, though, it’s clear that it’s here to stay.

Fortunately, there are support picks that help these core spammers win games and maybe even still have a good time doing so—without having to take a deep dive into the ins and outs of the support role.

Cold as Ice, Strong as Steel

With a win rate of around 50.6 percent overall on Dotabuff at the time of writing, Lich is one of the most stable picks in the game. Neither overpowered nor unplayable, he is unlikely to be targeted by the opposing team in terms of counterpicking, and remains a strong selection in general when you don’t really know who else to choose.

This is because Lich’s laning stage is among the best in Dota 2. Powered by Frost Blast (Q) and Frost Shield (W), Lich can both bully squishy heroes straight out of the lane while protecting himself or his lane partner from harassment.

Frost Blast deals a ton of magic damage to a single target while slowing them by a flat 30 percent. When combined with other damaging abilities (i.e. whatever your lane partner has at their disposal), the harassment from this spell can quickly add up and allow your lane partner to farm at peace. Should your opponents refuse to respect your damage output, you can even score kills in the lane if you and your partner chain your spells correctly.

Frost Shield on the other hand, makes even the softest heroes feel like they have an extremely large amount of armor early on, and even serves offensive purposes thanks to the ring of magic damage that pulses out from the ability. During the final minutes of the laning phase and even in the mid game, Lich can also use Frost Shield to farm creep camps, leveraging the consistent damage as well as the physical damage reduction to great effect.

Later on, the level 25 talent associated with Frost Shield even allows it to act as a healing spell, since it applies a 60 HP per second regeneration effect on its target. Oh, and the spell can be placed on structures, too. Yes, the regen works on buildings as well. Free Repair Kit, anyone?

These two abilities put together make Lich extremely easy to play. Not only are they simple to use, they also require very little in the way of advanced thinking to apply. Need to harass an opponent right away? Hit them with Frost Blast. Fancy a go at them with your lane partner? Slap Frost Shield on them and dive the tower. Have to defend your high ground or a key outer tower? Frost Shield slows the enemy team’s push down hard enough to buy time for your teammates to respond.

This game plan works with almost any hero, too, which makes working Lich into any draft quite straightforward. There is almost no lineup that Lich can’t find a purpose in, with the exception of those that don’t really have any real stuns or disables to work with.

To fuel this kind of onslaught in the lane, we recommend buying plenty of Enchanted Mangoes to keep your mana topped up. Lich doesn’t have any mana regeneration to speak of, and will quickly run out of juice spamming the two aforementioned spells.

Lich is also blessed with incredibly impactful teamfight abilities, in the form of Sinister Gaze (E) and Chain Frost (R). Both spells can either start an engagement with an advantage for your team, or outright win a protracted one especially if your opponents stay close together.

Sinister Gaze works a lot like Shadow Shaman’s Shackles, albeit with a much shorter duration. It does however make up for this by having other useful properties; the ability pulls the target towards Lich over the duration, while also draining 25 percent of their current mana pool.

This spell alone shores up one of Lich’s old weaknesses: not having a hard disable. Sinister Gaze applies the Fear mechanic to the target, rendering them completely unable to act as they are hypnotized. While it is still a channeling spell (thereby leaving Lich himself vulnerable while casting it), the sheer utility of Sinister Gaze cannot be overstated. It does a ton more than similar abilities, and can turn the tide of battle when used on a key target in order to quickly pick them off.

Chain Frost, meanwhile, is currently one of the most broken teamfight spells in the entire game. As if the potential to deal 550 magic damage per bounce over a maximum of ten bounces wasn’t ludicrous enough (to put this in perspective: that’s just 50 damage less than Lion’s Finger of Death at level 1), the 65 percent movement speed slow on top of it all just makes Chain Frost a straight up teamfight winner.

Casting Chain Frost in between even just two heroes in a five-on-five engagement can already have a ridiculous impact on the teamfight itself. The movement speed reduction means that targets hit by the spell cannot get away from it so easily. In the lower brackets of ranked matchmaking, this can be especially devastating given the slower reaction times and loose coordination of players in those ranks.

And in keeping with the hero’s design, using these two abilities likewise takes no effort whatsoever. Chucking Chain Frost in a teamfight is as simple as hitting the R key and clicking the nearest hero with another next to them. It’s very “set and forget”, which is crazy to think about given just how much the spell does on its own.

On the other hand, Sinister Gaze has a more than decent cast range of 575 units at max level, which helps ensure that Lich can get at least half of the duration off from a safe distance before getting disabled himself. With an Aether Lens in tow, the range skyrockets to 825 units—and that’s without the cast range talent at level 20. You can just imagine just how far you can catch someone in it at that point.

And now the answer to the question we know you’ve all been asking yourselves: but what about items? Does Lich need farm to be effective?

The answer is “no”, full stop. Lich can have a net worth lower than 2,000 gold in the late game and still wreck people with Chain Frost alone. Even with the emptiest inventory in the game, he can still be a menace to the enemy team and deal an insane amount of damage in teamfights. In some cases, he can even come out of a full scale with the most damage dealt in total—all without the assistance of items.

Of course, this isn’t to say that having gold to work with doesn’t help him much. As mentioned before, Aether Lens makes it way safer for him to operate, especially when it comes to trapping targets with Sinister Gaze. Being able to cast his nukes from further away also gives the enemy team less time to react. Other items like Glimmer Cape, Force Staff, and Rod of Atos likewise make Lich’s kit more potent and harder to get away from.

Aghanim’s Scepter, on the other hand, turns Sinister Gaze into a bootleg version of Enigma’s Black Hole, and can single handedly win teamfights in the late game if placed correctly. And while it doesn’t pierce spell immunity with the upgrade applied, frontline support heroes are still very likely to get caught in its influence.

There are plenty of other options for Lich in terms of equipment, and the utility of his kit as a whole allows him to mix and match according to the opposing team’s draft. But the bottom line is that he can walk into a teamfight with nary a trinket to his name and still destroy the enemy team with one spell. This is important for those that don’t play support that often or have never played Lich in their lives, as they can basically pick up the hero and do well without having to practice all that much first.

Where Lich does require some forward planning is in his ability build. The ideal progression isn’t immediately obvious, primarily because of the mana cost of Frost Blast at max level. While most supports will want to max their most damaging abilities first, this isn’t the case with Lich as it will lead to a shortage of mana in the laning phase.

It is for this reason that we recommend maxing Frost Shield first, and leaving Frost Blast at level two for the early game. Frost Shield is simply way more efficient mana-wise, since it deals a total of 300 magic damage at max level for 60 mana less per use compared to Frost Blast. Moreover, Frost Shield accomplishes the same things that Frost Blast does, slowing enemy units caught in its wake for an equivalent amount at level three. Diving towers also becomes much easier with it, thanks to the massive physical damage reduction.

A single value point in Sinister Gaze to start with is also good; it will be more than enough for the laning phase in most cases. Its duration at level one is nothing to write home about, but will suffice for most kill attempts in the lane.

As for talents, we recommend +200 Health, +120 Damage (this one in particular has crazy value for a level 15 talent), +200 Cast Range, and +60 HP regen on Frost Shield. The first talent is interchangeable depending on your needs and the enemy team’s draft, but the rest are pretty much the best choices in every game.

Thus, the recommended build is as follows:

And there you have it. Lich is one of the simplest supports of all time, and is also very effective in a metagame where frequent brawling in the early and mid game is practically required.

We encourage you to try him out the next time you have to play support as part of the ranked matchmaking system—especially if you’re a core player primarily. You might be surprised just how much you can contribute in the damage department despite Lich being a support hero through and through.