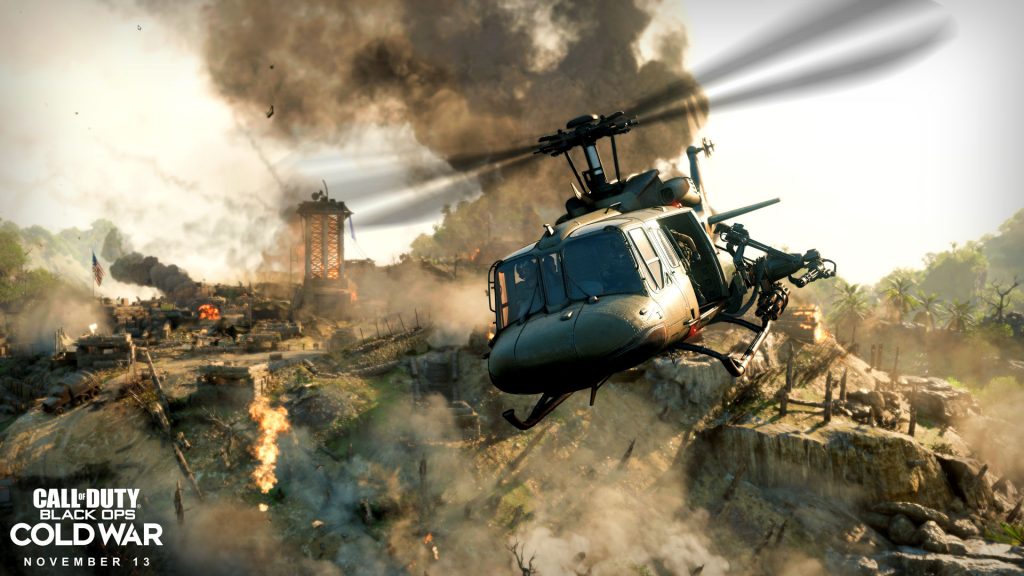 These weapons should be enough to help you stay competitive. (Photo courtesy Activision)

Call of Duty: Black Ops Cold War is now available on all platforms and features a wide variety of weapons for players to use. Almost every weapon is a viable option in most scenarios, but certain guns perform better or are more reliable.

Using the best available weapons will ensure that you stay competitive and not be an easy kill for your enemies. However, these weapons will likely be updated in the future. So you’ll want to make sure to continually experiment with your classes to find the perfect fit for your gameplay style.

Here are the best weapons in each class in Call of Duty: Black Ops Cold War 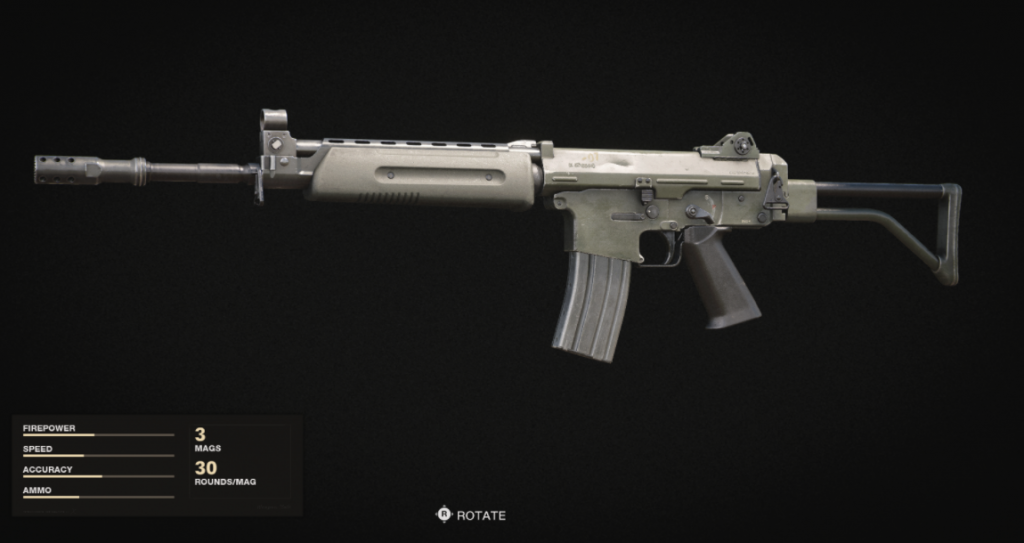 Leveling up weapons in Cold War is a tedious process that requires patience and commitment. Most of the best attachments are unlocked at higher levels. This means players will spend a lot of time with a basic weapon. Good thing, because the Krig 6 is an excellent base weapon. It can be turned into a powerful mid-ranged gun with the right attachments.

The Krig 6 unlocks at level 19 and is the most precise assault rifle in Cold War. It is a viable weapon at all ranges with the proper attachments and once players understand how to use it. Various under barrel and muzzle attachments allow the gun to have virtually no recoil. This makes it perfect for both veterans and new players.

Other weapons such as the AK-47 and FFAR 1 have a higher rate of damage. However, they are more challenging to master. The FFAR 1 is also the last weapon to be unlocked, so players will have a bit of a grind before they can use it.

Surprisingly, several assault rifles in Cold War are perfectly acceptable in most situations unless you are competing in a professional environment. You can likely dominate with any of the weapons listed above as they each have their strengths and weaknesses. However, the Krig 6 is easy to use and a dependable gun that is a perfect starting point.

Keep an XM4 class ready, if possible, to fall back on if you run into trouble while using the other assault rifles. 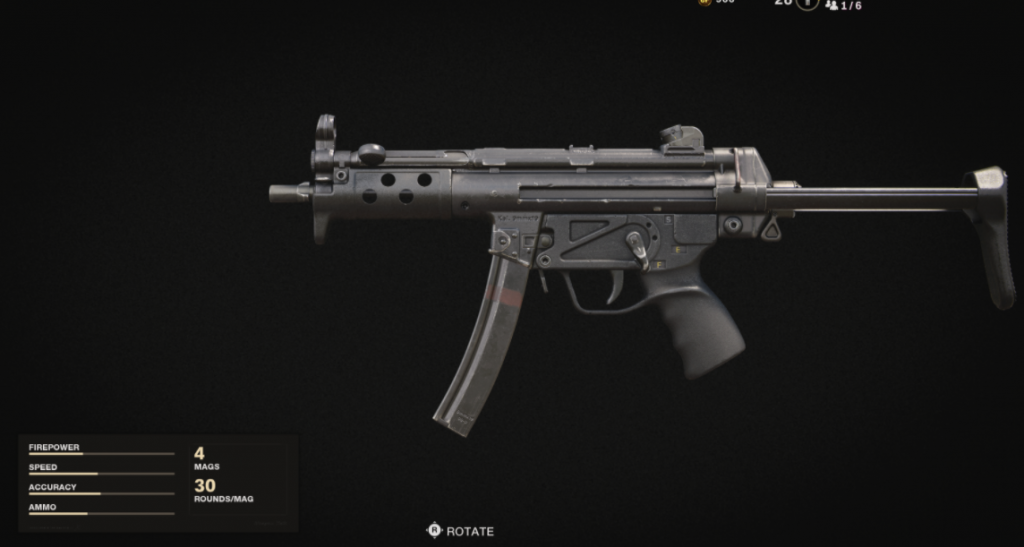 The MP5 was one of the most powerful guns in Call of Duty: Modern Warfare and the latest version in Cold War is no different. The iconic SMG a lot of firepower quickly and is unstoppable at close ranges.

Few weapons can compete with the MP5 in close-quarter combat. Other SMGs such as the Bullfrog and AK-74u are also solid choices, but the MP5 is the most consistent. Players can also use attachments to make the weapon even deadlier at close range or more effective at longer ranges.

Many players use a suppressor to avoid detection as they creep around the map. Adding a steady aim laser for increased hip-fire accuracy is also an option. The MP5’s 30-round magazine does run out fairly quickly. But attachments that lower the reload time or increase the magazine’s capacity can resolve this problem.

Aggressive playstyles are perfect for the MP5, so make sure to take advantage of the strong weapon and not be afraid to challenge enemies. 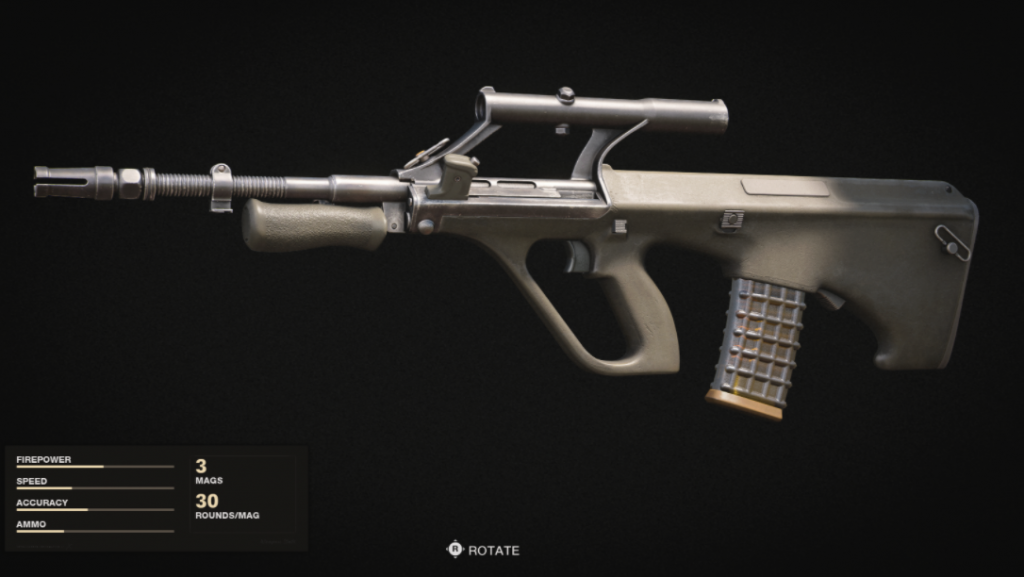 The AUG is a powerful gun that delivers massive damage. So much so that it can kill players in two bursts at long range, and one burst up close. This makes the AUG a powerful weapon as Cold War has a slightly longer time-to-kill than its predecessor.

The AUG features a default scope that is suitable for most engagements but can be changed based on player preference.  The AUG does have a significant recoil, especially when firing multiple burts. However, several attachments can be used to reduce the recoil to help players maintain control.

Marksman Rifles are not suited for a run and gun playstyle. So make sure to select attachments that help it excel in mid-ranged engagements. It is possible to use the AUG in close-quarter combat, but fully automatic SMGs like the MP5 will typically win engagements.

Another Marksman Rifle worth mentioning is the M16, which functions very similarly to the AUG. Both weapons are burst fire and are deadly at mid to long ranges. However, the AUG has a slightly shorter time between bursts. It is harder to control the AUG, so the M16 is another solid choice for players who have a tough time controlling recoil. 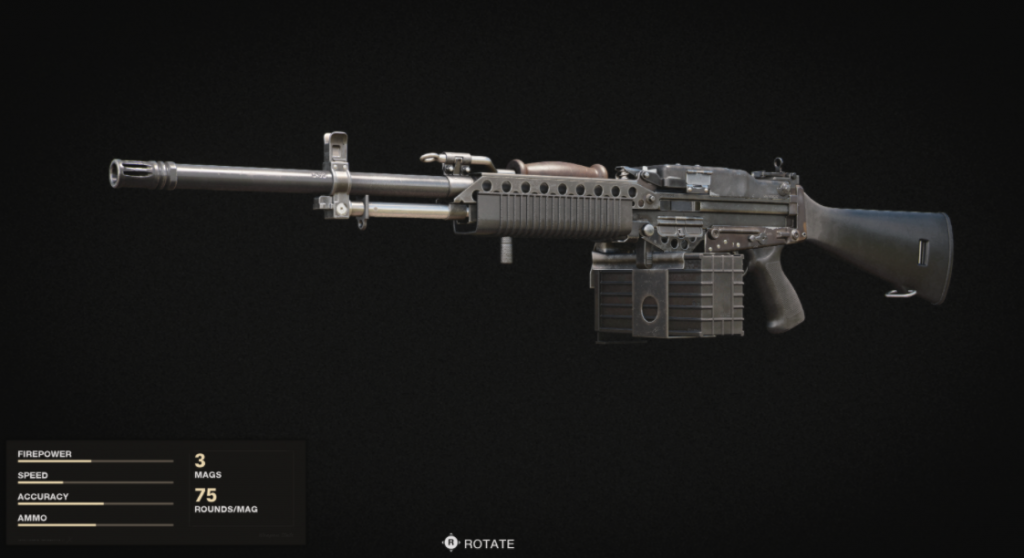 LMG’s are the heavier, more powerful versions of assault rifles that deal massive damage but are typically slower and bulky. Players who can adjust their playstyle to use LMG’s can devastate enemies with ease.

The Stoner 63 is the first LMG unlocked in Cold War and is an often overlooked gem. The gun has incredible accuracy that allows players to deliver precise damage from a distance.

This is not a suitable weapon for mobility and aggressive playstyles and is best used to cover lanes or specific areas. It is best to use a suppressor to avoid being an easy target for enemies and prevent them from honing in on your location. The Stoner 63’s recoil and reload time can also be reduced with attachments, and there are several combinations to make the gun a deadlier weapon. 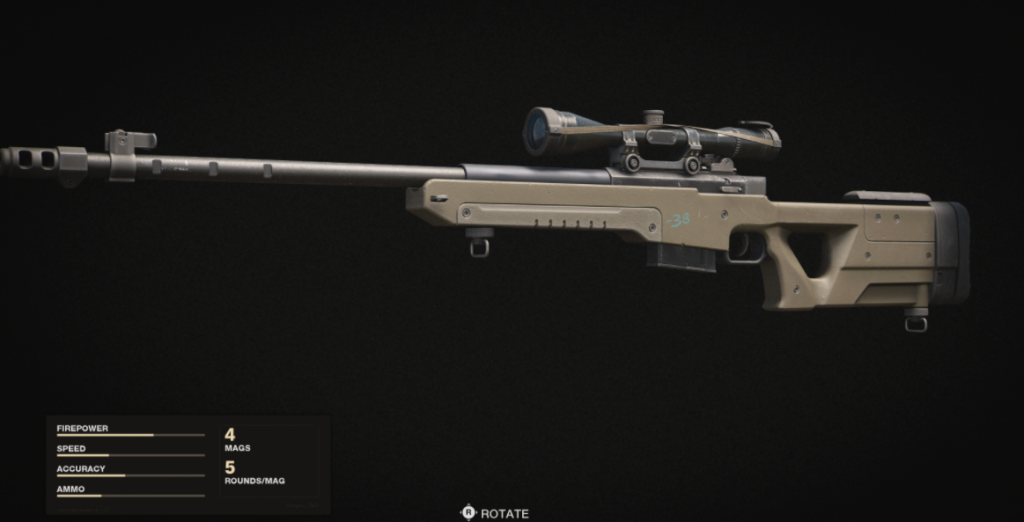 Many players are torn between the LW3 Tundra and the Pelington 703 sniper rifles. Both weapons are bolt-action and can devastate enemies at long distances, but they both have strong points. The LW3 can kill in a single shot to the head, chest, or shoulders, while the Pelington is slightly less powerful. Considering how vital damage is, the LW3 Tundra is currently the best sniper rifle in Cold War.

The LW3 also has a quick ADS speed, allowing players to zoom in on their enemies quickly. Players can also add a magazine attachment for ammo, which prevents the need to reload as often. Players are better off switching to a secondary weapon if enemies get close, but attachments like the Steady Aim laser increase hipfire accuracy if you’re inclined to use the gun at close range.

Snipers in Cold War feel slower than most players are likely used to, so it is best to experiment with the LW3 and find your preferred setup. 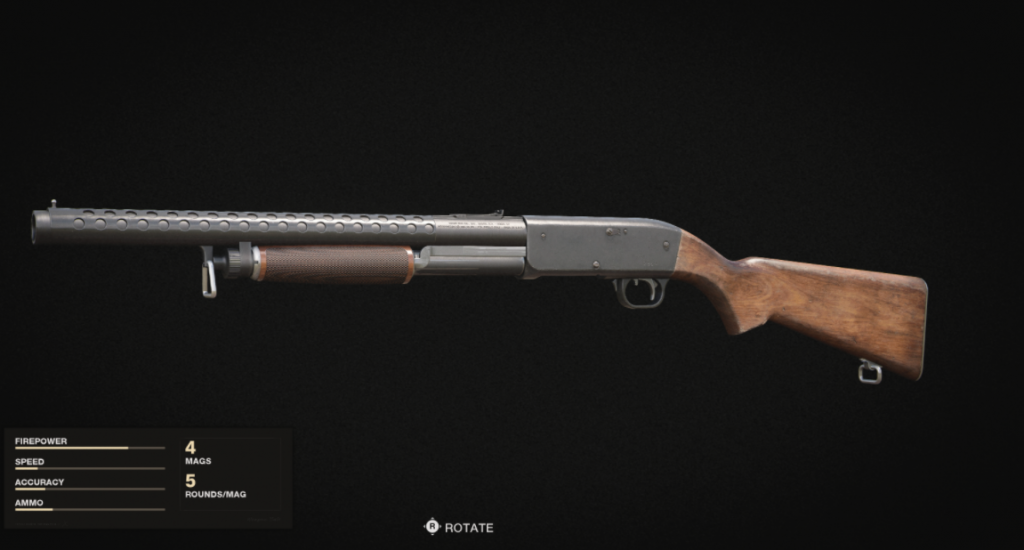 Shotguns are not featured as primary weapons in Black Ops Cold War and instead function as secondary weapons. This distinction does not make them any less powerful in the right situations. Players have the choice between the Haur 77 and Galio SA 12, which are unlocked at level 10 and 22, respectively.

Players can extend the range on the Haur 77 with attachments such as the 24.1” Ranger barrel. The hipfire accuracy can also be boosted with various attachments that make the Haur even deadlier at close ranges. 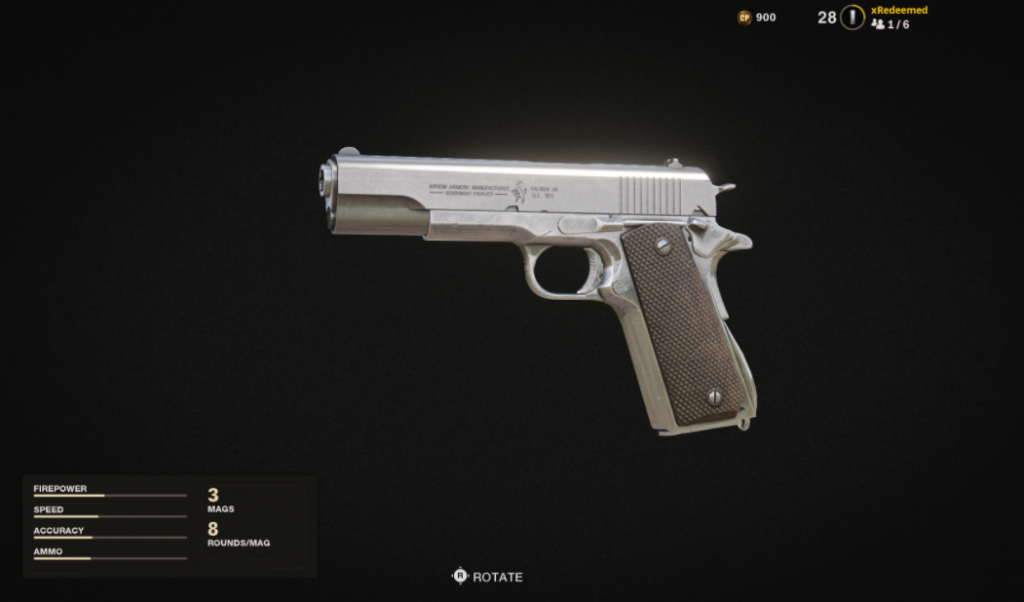 Many players prefer a shotgun or launcher as their secondary weapon, but the 1911 is a powerful handgun perfect for emergencies. The 1911 is a semi-automatic handgun that delivers significant damage that can finish off enemies if needed.

Running out of ammo in a gunfight is a challenging situation, especially when engaging multiple enemies. Players can attempt to reload behind cover, but this leaves them vulnerable for a few seconds. It is important to remember that switching to your pistol is almost always faster than reloading, and the 1911 is more than capable of killing injured enemies in a pinch.

It is not recommended to use the 1911 as your primary weapon in core modes as it will leave you at a significant disadvantage. However, it is a powerful secondary weapon, so consider using it in your classes.

Black Ops Cold War has a wide variety of weapons for players to use. These weapons are a good starting point for all players and will keep them competitive in most game modes. Do not be afraid to try other weapons to see if they are a better fit for your playstyle.

Weapons will likely be further adjusted soon, and some guns might become less viable than their current state. Getting comfortable with multiple weapons is the best way to prevent yourself from falling behind the competitive meta.