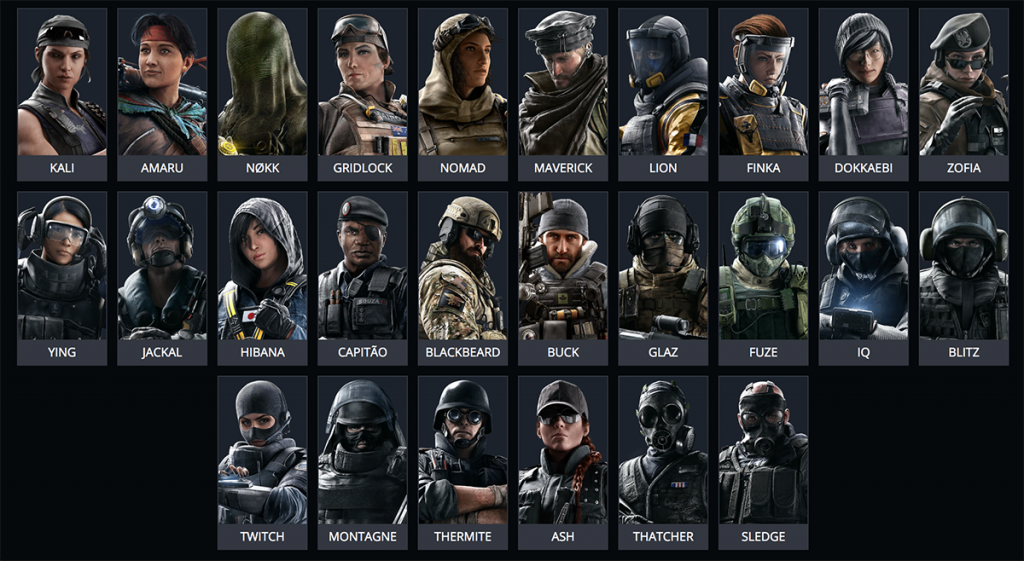 With over 50 operators to chose from, Rainbow Six Siege can seem daunting to new players (Image via Ubisoft)

There are now 52 operators in Rainbow Six Siege, each with their own uniqueness and viability. For a new player, it may be difficult finding out who to play and for what reasons. We will help guide players to specific operators, which will help educate them on the various roles in the game. In addition, it will also help point players to viable operators for ranked play.

With low armor and high speed, Ash is a great operator for entry fraggers (Image via Ubisoft)

Ash is arguably the most typical and easy to use fragging operators in the game. With low armor and high speed, Ash is the go-to entry fragger for most players. Her rifles have seen numerous changes to balance her in 2019. However, the R4C and G36C seem more on par with each other now. R4C for running and gunning, G36C if you need to play with an ACOG. Find your style and learn how to frag with Ash.

She also has a valuable breaching tool for taking down soft walls, enemy gadgets, and unprotected hatches. This makes her quite good at getting through enemy defenses or traveling through the map.

Once when you have a feel for Ash try-out Zofia. She has similar capabilities, but less run and gun tactics and more stun mechanics.

Using Thatcher well can offer vital openings to get through the defender’s walls. Knowing how to position Thatcher in the right place at the right time is a skill worth learning.

For players looking to learn supportive elements, Thatcher is a must. Once when you get used to Thatcher you can give Twitch a try. Twitch offers similar options, but she uses a special drone instead, making it easier for the defenders to counter.

To better understand how to breach and attack objectives, Thermite is a key operator for players (Image via Ubisoft)

The original hard breacher. Thermite is your answer to any reinforced structure that needs an adult-sized hole in it. Learning to play Thermite teaches you the basics of how to get into objectives. In addition, Thermite teaches about attacking synergies, and a Thatcher or Twitch player will become your best friend for the round.

For those players that want to be team-orientated, Thermite is a useful operator to learn. From there, you can learn to play Hibana, who excels at hatch destruction and creating smaller holes for other purposes.

Capitao is a user-friendly support operator to play. He has great guns, especially with the LMG buffs earlier in 2019. Capitao uses a crossbow, which has incendiary arrows, for flushing out defender spots, or smoke grenades, to help your team plant safer or make defenders cautious of pushing through smoke.

When you’ve got a feel for Capitao, you can move onto Zofia for her breach and stun grenades launcher, or Ying for her cluster grenade flashbangs.

Ok, more people suggest Sledge over Buck, and that’s fine. However, Buck is genuinely better in most cases. Buck’s shotgun skeleton key offers the option to destroy floorboards above. Different attachment builds on his weapons also affect the shotgun spread of his skeleton key, for advanced planning heading into the round.

This is way more useful than Sledge for understanding how to manipulate the map in the attacker’s favor. Sledge does have a win over destroying things like barbed wire, but its only a slight inconvenience for every other attacker who must hit the melee key twice.

Rook is amazing for holding angles, sitting on-site and protecting the objective (Image via Ubisoft)

Rook is the titan of the defender side. He drops down a bag of armor plates, which gives everyone who picks one up extra damage mitigation. On top of Rook’s three armor, his plates make him even tankier.

Rook is also amazing for holding angles, sitting on-site and protecting the objective. If you are more of a turtle tactic player, Rook is amazing for the role.

Once when you understand how to hold angles or watch over the site, operators like Kaid, Doc, and Goyo are some of your alternative options.

Jager is one of the only defenders to be equipt with an assault rifle. His special gadget is also a trophy system designed to destroy attackers’ throwables, like grenades, stuns, EMP, etc. Jager always as a purpose on every defender site.

Jager also makes a great roamer with three speed and one armor. For those looking to be a fragger on the defense side, he will likely become a main of yours.

Once when you look to play other roamers, operators like Vigil, Pulse and Alibi are a great fit with their own niches.

Like Jager, Bandit is a quick operator with a great SMG. He can make a strong roamer and fragger for any defense roster. However, his main purpose is to electrify reinforced structures. This makes it harder for Thermite and Hibana to breach sites. Getting good at the bandit trick is a great feat for any defense player.

Alternatively, Kaid’s most recent electroclaw buffs make it easier to electrify multiple structures with one use. If you prefer the more armored playstyle, then play Kaid if you like the electrify mechanic.

Mute is the easiest pick for learning how to counter attackers’ drones. Placing down a jammer at drone access points denies the attacker valuable information. This is important for any successful defense strategy, as attackers gain information on who is playing where, any devices they need to be aware of, etc.

Once when you have a good understanding of how to deny drones, Mozzie is a great alternative. Instead of jamming drones, Mozzie simply steals them for you to use instead.

Maestro is arguably the defenders’ easiest operator to use when it comes to information tools. Maestro places evil eye cameras on surfaces, which he can later access to shoot low damage lasers against his opposition. This is great for denying breaching tools like Thermite, destroying drones, and maybe even killing an unsuspecting attacker. Maestro comes with three of these devices, making him great at establishing a defensive line, with several options to track information.

In addition, his LMG is easy to use and does strong damage. This makes him a valuable anchor and an objective holder.

Once when you get used to the intel game, this makes Valkyrie much easier to understand. Lastly, Echo is a good choice to advance to when he isn’t banned in ranked.