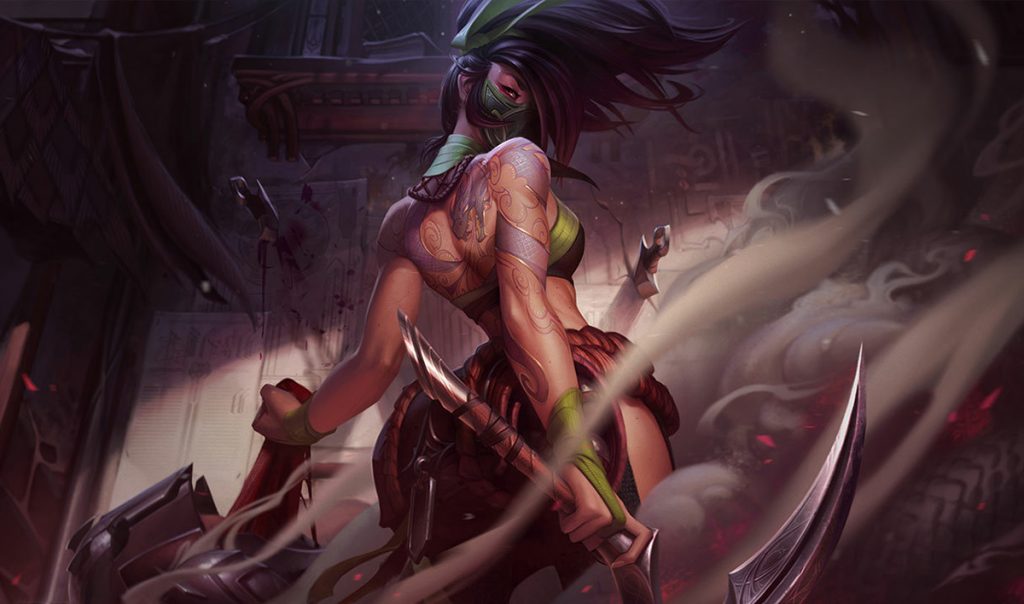 Every champion is playable in League of Legends Solo Queue. Champion proficiency is much more important than only using the most played champions in the meta — and even then — the meta can change quickly and elevate or bury some champions.

However, over the course of League of Legends, some champions have remained relevant over numerous metas because they work very well in a team game populated by players queueing up alone or with only one friend.

Below are some of the recommended champions to rank up in Solo Queue. Some themes you might notice being repeated are early game power, versatility, and the ability to roam quickly and effectively. 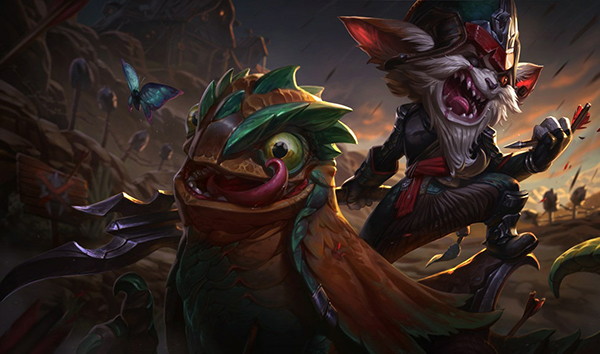 Kled is a great pick in Solo Queue because he excels at both split pushing and team fighting. His passive, Skaarl, allows him to come out on top in most trades early in lane, even as a melee champion. He also gets some mobility from his Jousting ability and Rocket Pistol while in his dismounted form. Kled gets crowd control from Bear Trap on a Rope and can burst enemies from timing his engages with his Violent Tendencies cooldown. So he always has kill potential, especially with help from his jungler.

That said, Kled also has access to ranged farming through both forms of his Q when behind. It’s important as a top laner to have a mechanism to farm even when falling behind in lane. That’s something that will just happen sometimes in a long lane that is susceptible to ganks. His ultimate Chaaaaaaaarge!!! also can help him get back to lane faster when absolutely necessary.

In addition to using it in lane, his ultimate is really useful for ganking for your allies. Kled can get a recall off, walk to bot lane, and ult himself into the fight. The speed boost helps your allies get in range to follow up the engage and allows you to waste less time on the roam in general. With running teleport, you can get in a less telegraphed bot lane gank without having to sacrifice your own lane’s farm. You can just TP back after the skirmish ends.

Kled should be in a side lane alone later in the game. This allows him to really push the advantage Skaarl gives him in 1v1, often forcing the enemy to send multiple players to defend. If he can’t overwhelm the enemy, Kled is one of the best champions at flanking an enemy team with his ultimate. Quick access around the map is one of the most undervalued traits a champion can have in Solo Queue. Kled is also great at chasing down a retreating enemy team.

However, Kled is not an impactful champion when playing from far behind. If he can’t threaten to win a 1v1 in a side lane, or the team is so far behind that he can’t safely push, he doesn’t offer much to a team defending a siege. His waveclear is fine for in lane, but he doesn’t do much to help a team fend off a Baron push.

Fortunately, not many champions are great at that, and you don’t really want to be choosing your Solo Queue champion assuming the enemy team is going to get a massive early lead. You have Kled so that you can help your team snowball and continue to push your advantage, whether by yourself split pushing or by initiating for your team. 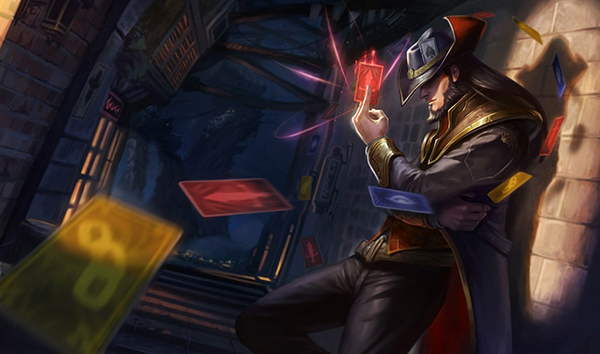 Twisted Fate is another excellent Solo Queue pick. He is not the same dominant laner that Kled is, but it is also very hard for Twisted Fate to be punished in lane. The range on his Wild Cards and Pick a Card combined with their ability to clear waves means Twisted Fate never has to put himself in harm’s way during the early laning phase. Further, the easy waveclear makes it so that he has little trouble creating an opportunity to get the wave pushed and use his Destiny to gank sidelanes.

An underappreciated part of Twisted Fate’s Destiny is that it reveals all enemy champions on the map. This is especially useful against champions with forms of stealth and to scout whether the enemy is attempting Baron or Elder Drake. Even incidentally, it reveals the enemy jungler when used for ganks in the early game as well and can save yourself or your teammates from a gank or countergank.

Twisted Fate does not dominate 1v1 like other champions can, so he is reliant on making plays with his team. This can be a problem if the other lanes fall behind so quickly that not even a roam with Destiny can turn it around, after which there is not the fallback option of trying to create advantages solo.

Fortunately, waveclear is of course not only useful for roaming, but also for stalling out games. Twisted Fate can protect turrets like most mages and his ability to regain mana from his Pick a Card means that he can do it without the use of blue buff or without the need to recall for mana.

So despite his inability to create advantages by punishing his enemy laner, Twisted Fate has enough options to be useful in every game state. This combined with the advantage that roaming generates in non-premade games makes Twisted Fate a top Solo Queue pick. 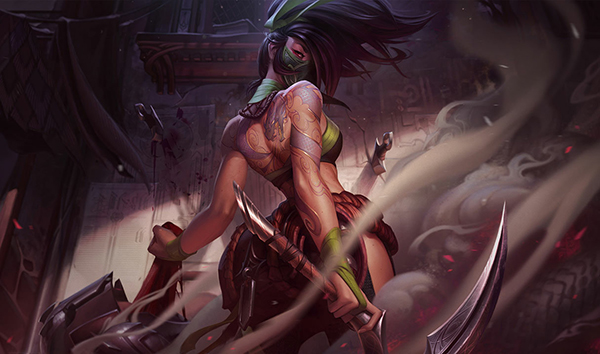 Akali doesn’t have a semi-global ultimate like Kled or Twisted Fate, but she can offer a lot of roaming potential as well. She pushes waves quickly with her Five Point Strike, allowing her time to look for roam opportunities. She has to walk through the rivers to gank, but she has several tools to ensure her safety. Shuriken Flip and Perfect Execution can get her over walls and create distance from enemies, while Twilight Shroud allows her to juke around and buy time for her allies and cooldowns.

These same characteristics also make her potent when she arrives. Enemy champions do not have a lot of options if Akali commits to the chase. Three gap closers mean Akali will be able to get in range. She also has incredible burst damage and an execution on the second half of her ultimate.

Akali’s ability to flex between lanes is also useful for Solo Queue. First, it allows you to trade lanes based on matchups or based on the role you get when you queue up. It’s very effective to have a small champion pool to focus on while climbing, so it’s a big bonus to be able to play a champion in multiple roles. But it also can confuse enemy teams and make it tougher for them to counter pick when they don’t know which lane a champion will play in.

Though she has these plus sides, Akali is another champion who struggles playing from behind. If she doesn’t have enough items and levels to delete an enemy champion, she doesn’t offer her team any utility in fights. She also cannot waveclear from a safe distance against a siege. These are common problems when playing melee assassins.

The point of the pick, like Kled, is to use your laning and roaming power to get yourself and your team ahead. Akali can still make an impact when her team is behind, as long as she herself is ahead. She can ensure this by farming hard with her Five Point Strike and being opportunistic with her roams. Her escapability makes her a tough gank, so she has the tools to carry even when focused by the enemy team. 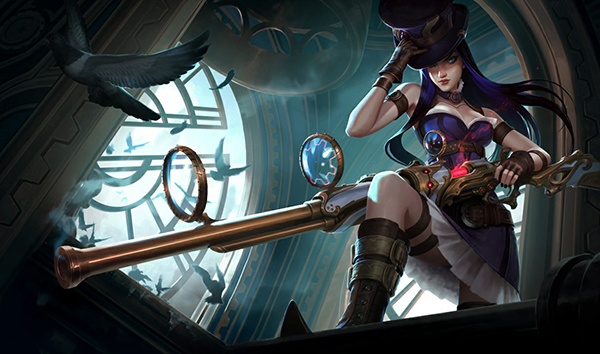 Caitlyn’s amazing base range allows her to dictate trades on her own, making her great for solo queue (Image via Riot Games)

Bot lane is one of the toughest roles in Solo Queue. Four players in one lane creates so many possible fight scenarios at all times, not to mention attracts the most attention from the other players on the map. It can also be frustrating if you don’t have a duo queue partner to coordinate within lane. That’s what makes Caitlyn such a valuable pick. Her amazing base range allows her to dictate trades on her own. It also gives her easy access to farm even if the lane falls behind.

Starting from level 1, Caitlyn has the range advantage in lane and can dictate the terms. Good use of auto spacing allows her to win all auto attack exchanges, and her Piltover Peacemaker makes for nice poke. Even though she isn’t a great burst champion, she still pairs well with a crowd control support because she can layer her Yordle Snap Trap with her support’s stun.

There is no substitute for range in team fights, so Caitlyn also excels there when she gets enough items. She isn’t the most mobile carry, but she does have at least one mobility spell in 90 Caliber Net. She doesn’t have flashy spells to dance around the fight, so she has to be on point with her orbwalking and auto spacing to output maximum damage.

The tradeoff for her range is that Caitlyn does not deal much in terms of spell damage. Her Piltover Peacemaker locks her out of attacking and none of her other spells are really used for damage in the middle of fights. This makes her weak in the mid game on one item. She needs to get a damage and attack speed item to ramp back up, but preferably three total before she comes online.

That mid game power dip should be managed by keeping the enemy ADC down in lane. It doesn’t hurt as much if the enemy can’t keep up with the items Caitlyn is purchasing. With a strong CS lead and by chipping away turret plates, Caitlyn should be able to buy her way through her weak phase. That makes her a powerful pick in the right hands in Solo Queue. 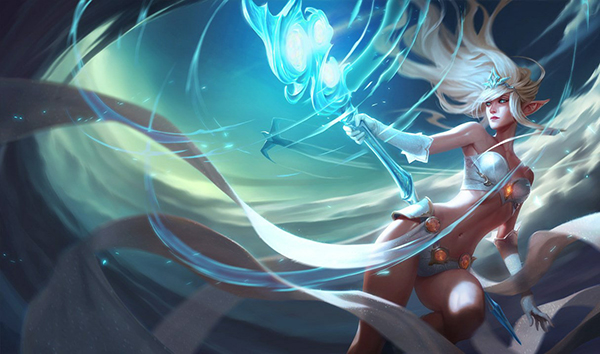 Solo Queue tends to see a lot of assassin players, and Janna thrives at shutting assassins down (Image via Riot Games)

Like Caitlyn, Janna is a bot laner and in a role that relies on coordinating with a second player. So, while Caitlyn wants to trade aggressively in lane, Janna is an excellent champion to peel for her carry. Howling Gale and Monsoon are incredible peel abilities, and Eye of the Storm gives bonus attack damage in addition to the shield on her carry. There have not been any metas so far that have lacked a carry champion who could use protecting.

In addition to protection, Janna can also be a great laning partner. Just having range on her auto attacks gives her more harass than half the support pool, and she additionally has Zephyr that can be maxed early for even more aggressive lane play. Throwing Eye of the Storm on herself also allows her to step up and trade even more effectively.

All of the peel Janna provides makes her excellent at preventing ganks. Something as small as her passive Tailwind giving her lanemate bonus move speed near him cannot be underestimated in terms of kiting enemies.

Janna is very squishy and can be instantly blown up if crowd controlled and unable to get any of her peel off. Janna does not have a great way to engage aside from walking up to an enemy and hitting them with Zephyr, which means engage will have to come from a teammate.

Overall, Janna fits almost any composition because there is almost always at least one champion that needs peel and Janna has elite peel. Solo Queue tends to see a lot of assassin players, and Janna thrives at shutting assassins down.