A Beginners Guide to Summoners Rift 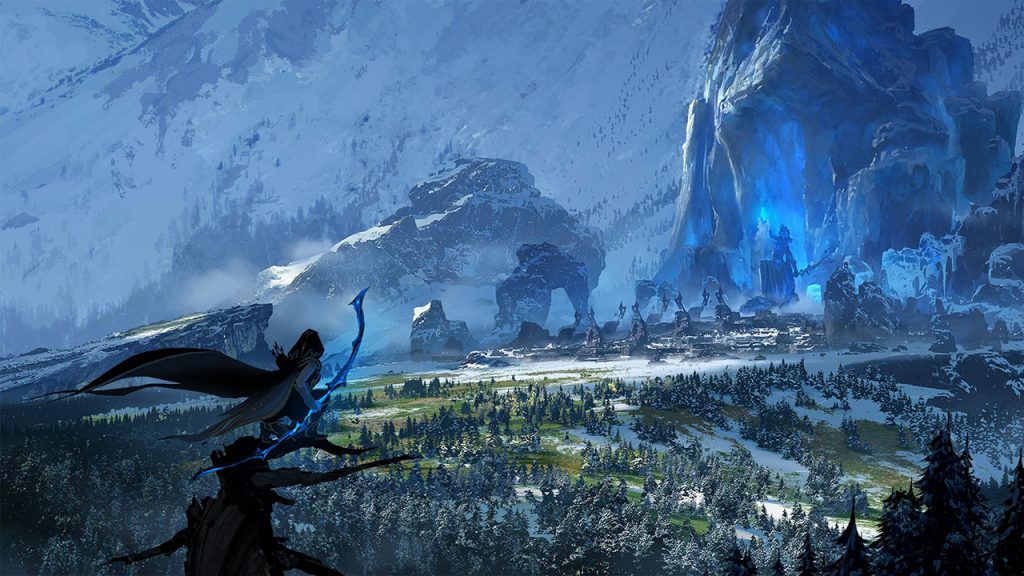 League of Legends is the most popular MOBA, and esport, on the planet. It’s also one of the most daunting online games to break into for the first time. Getting familiar with a huge roster of characters, item builds, and the Summoners Rift full of crucial objectives will sound more like homework than a good time to a lot of people at first glance.

Despite League’s 148 unique champions, 22 different objectives on the map for either team to secure, and infinite number of viable strategies employable in a given match, the goal of the game is simple: Destroy enough enemy towers to break into their base and destroy their Nexus.

In this beginner’s guide, we will give you the tools to feel confident trying out “that game Teamfight Tactics is based on” for the first time without all the headache.

Before you load in, you’ll be asked to choose one of 148 different champions to enter the game with. Each champion has its own unique passive and set of four abilities. All champions typically slot within a certain role: top lane, jungle, mid lane, bot lane/marksman, and support. You won’t start out with every champ unlocked right away, but don’t worry, there’s a new rotation of 10 free champions every week for you to try out until you’ve saved up enough Blue Essence to buy your favorites.

Based on what certain champions are able to offer, such as reliable tankiness and crowd control or high DPS, you can form a team composition to fit whichever style of play you like best. Most champions either deal physical damage (AD), magic damage (AP), or some combination of the two, so having a decent amount of variation in damage types is a good thing to consider when coordinating with your team. 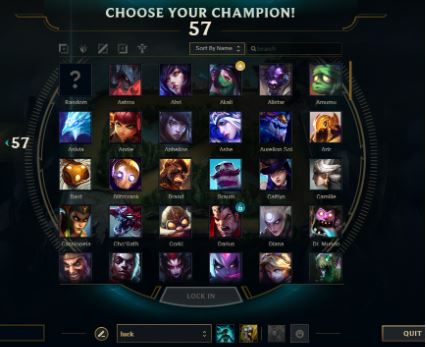 When picking a champion, you’re given the option to choose a set of runes and summoner spells to give you some strategic flexibility in-game. Runes are sort of like skill trees in a standard RPG.

You opt into different major and minor traits that give you special stat bonuses or quirky gimmicks to help you get a slight edge over your opponent. Summoner spells are special tools with long cooldowns that allow you to manipulate your champion in a way that you otherwise wouldn’t be able to with abilities alone (i.e. teleporting somewhere on the other side of the map).

After loading into a game, your champion will prepare to do battle on Summoner’s Rift – the map LoL is played on. As mentioned previously, the MO of every single League of Legends game is always the same no matter how experienced the players are: destroy the enemy Nexus on the opposite side. 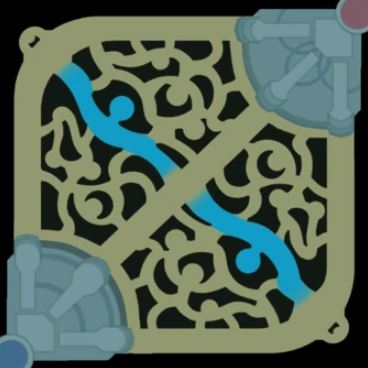 The map of Summoners Rift

The thing stopping you from waltzing past the opposition and smacking it to pieces? 11 deadly turrets that will fire at will if you’re within their range without protection. If you want to safely destroy turrets, you’ll need to attack with a wave of minions– tiny NPCs that spawn every 30 seconds down a lane and attack enemy structures in their path. This is made even more difficult by the fact that a mysterious darkness called the Fog of War blocks you from seeing areas on the enemy’s side of the map that aren’t lit up by a ward or occupied by an allied minion or champion.

A typical LoL match is broken into three parts: early game, mid game, and late game. After loading in, players march down one of three lanes based on the role they decided on when selecting their champion; this is where the early game begins. Players duke it out in a 1v1 or 2v2 “laning phase” against the enemy or, if they chose the jungle role, they’ll roam the map to make plays.

The goal here is to get gold by killing enemy minions/monsters (farming) or killing enemy champions so you can buy items from the shop that will make you stronger. The mid game rolls around normally after the first turret is destroyed. This is the stage of the game where you’ll look to make some coordinated plays with your team to help speed the game along, whether it’s taking an objective (which we’ll touch on later) or searching for epic 5v5 teamfights that will buy you time to take more turrets.

The late game kicks in at about 30/35 minutes or so when teams are at relatively equal strength. Not all games go on for this long, but at this point, one single play or teamfight could decide the winner.

We’ve talked a lot about objectives already, as securing them for your team is the only way to win a League game. Objectives refer to the various things on the map that give an advantage to your team once destroyed. There are two types: structures and neutral monsters.

Aside from the Nexus, there are two types of structures that can be destroyed for a reward: turrets and inhibitors.

Turrets: Each team has 11 turrets defending their nexus. Every time you destroy one, your team gains gold and some more room to move around on the map.

Inhibitors: Each base has three inhibitors that spawn powerful and tanky super minions for a period of time for the team that destroys them. In order to deal damage to the Nexus, you need to have destroyed at least one inhibitor.

Neutral monsters are standalone objectives on the map that reside in certain areas of the jungle. You’ll need some help for some of the more powerful ones but, as the name implies, they won’t bother you unless you attack first.

Each team has six types of smaller neutral monsters in their respective jungles that grant individual gold or buffs, but you’ll find five different monsters along the river that provide some seriously strong power-ups for the entire team. 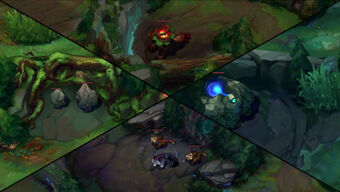 Jungle camps: Your team has six jungle camps that are normally taken by the jungler as a means of income throughout the game. Four of them generate gold (Wolves, Gromp, Krugs, and Raptors) and two of them, Red Brambleback and Blue Sentinel, grant temporary bonus stats (red buff and blue buff). Red grants health regeneration, a damage over time effect that ignores resistances, and applies a slowing effect to auto-attacks. Blue gives increased mana/energy regeneration as well as cooldown reduction.

Rift Scuttler: Scuttlers are the only creatures on Summoners’ Rift that will never hurt you; two of them spawn at a time you can find one on either side of the river. Destroy it to reveal a small area of vision on the river that gives a movement speed bonus to you and your allies whenever you cross over it. 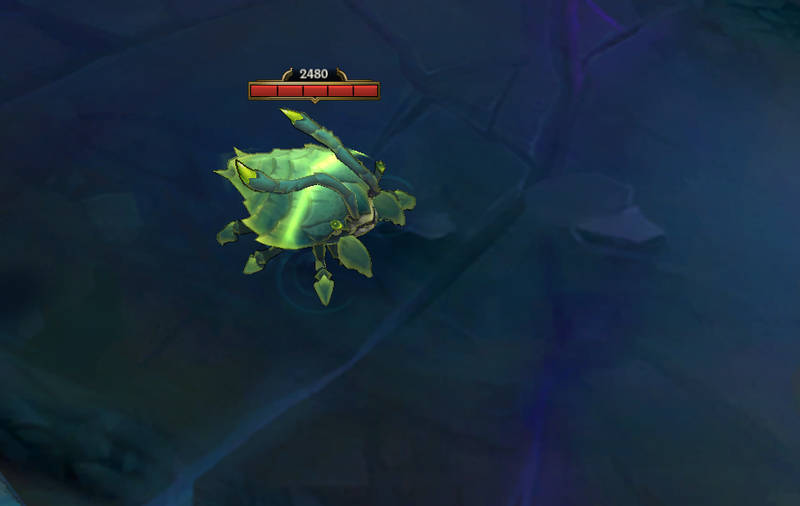 Elemental Dragons: Dragons are one of the most important neutral monsters in the game, as they give permanent buffs and interact with the terrain in a special way. Each one you kill gives stat bonuses to your team depending its element (Mountain, Infernal, Ocean, or Cloud). Mountain makes you tankier, Infernal makes you hit harder, Ocean helps with sustain and regeneration, and Cloud affects movement speed and cooldowns. 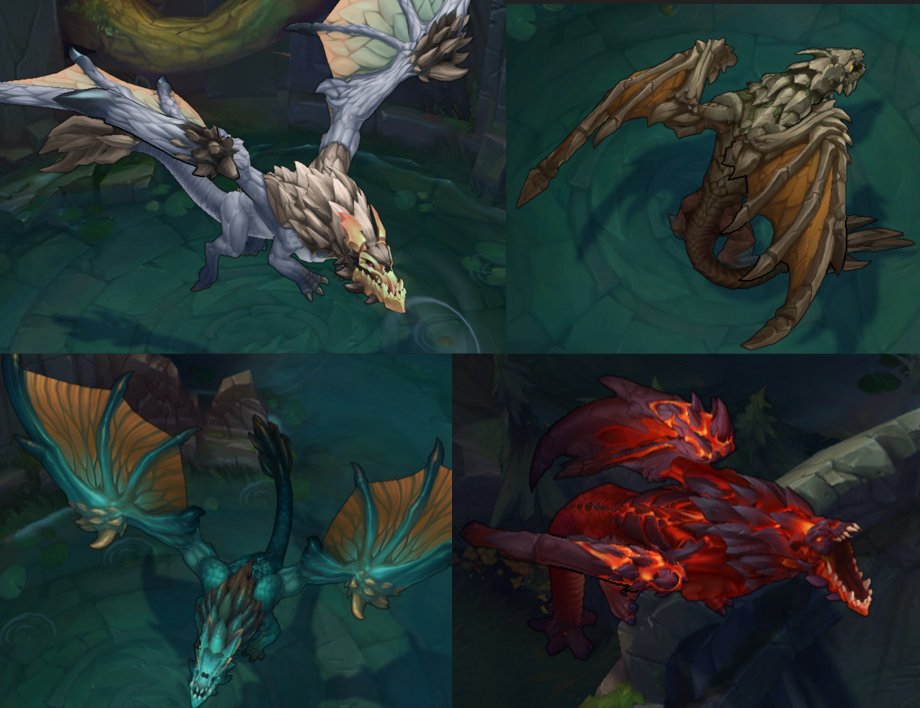 The four different types of Dragons on Summoners Rift.

Once two total dragons have been taken in the game by either team, the map will change slightly to match the element of one of the remaining attributes; this is called the Elemental Rift system. For example, if one team has taken an Ocean Dragon and the other grabbed Mountain, the map could change to an Infernal or Cloud Rift because those haven’t been taken. After the map changes, only the corresponding elemental dragon will spawn until a team has taken four dragons. That’s a lot to take in all at once, so you can read more about how elemental dragons work here.

Rift Herald: Before 20 minutes, Rift Herald spawns on the map in the same spot and will only spawn twice. Defeating one will drop an Eye of the Herald that can be picked up and used to knock down structures. Be careful! If you’re too slow to grab it after beating the Herald, it will disappear for good! 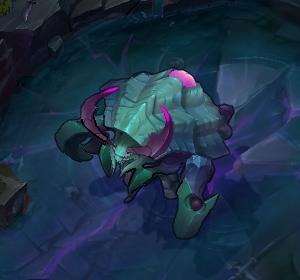 Defeat the Rift Herald to earn the Eye of the Herald.

Baron Nashor: Baron is the strongest buff in the game in terms of how well it helps you close things out. After 20 minutes, it will spawn in the same location as the Rift Herald. If you manage to kill it, your team will gain faster recalls, empowered minions to help you push, and bonus damage. Be sure to bring help when taking it down or you won’t stand a chance. 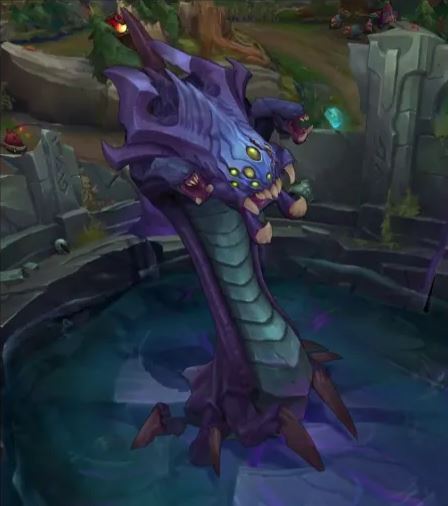 Elder Dragon: Elder Dragon is a special dragon that spawns after one team has obtained four elemental dragons. Whoever kills it gains a special buff that executes enemies below a certain health threshold and amplifies the strength of whatever dragon buffs they’ve already collected.

Now that we’ve laid out the basic concepts of the game and Summoners Rift, you’re ready to take the plunge onto Summoner’s Rift. From here, things get a little more complex.For now, find some friends, or go solo, and see how you do.