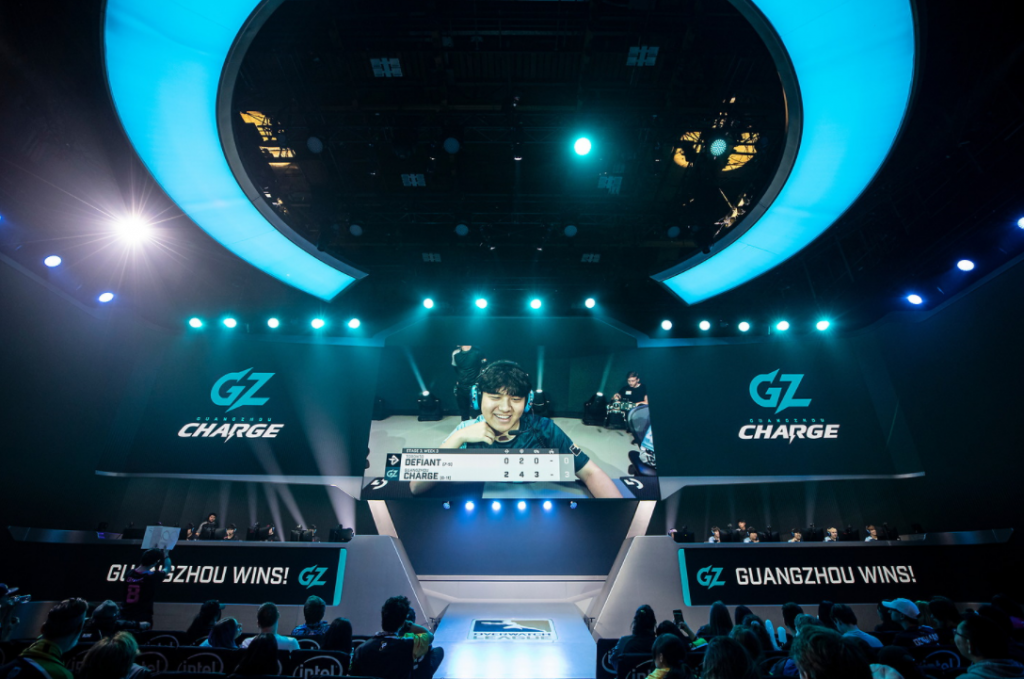 After a decent season, Guangzhou is shaking things up by replacing both players and coaches in hopes of improving even more in 2021. (Photo courtesy Robert Paul - Blizzard)

After a decent year, Guangzhou Charge elected to make some major changes to their roster and staff going into the 2021 season. They cut six players, signed three new ones, and hired a brand new Head Coach, former Shock Assistant Coach Ji-won “Arachne” Lee. With these changes, Charge are hoping to improve on their 2020 season. They had a decent regular season this year, ending with an 18-7 record and a regional title from the APAC Summer Showdown. However, they ended up faltering against Seoul Dynasty in the playoffs, which ended their season on a sour note.

[Offical] Today we say goodbye to neptuNo and Chara. Thank you both for being great leaders in and outside the game, and we wish you all the best in the future pic.twitter.com/sS9MNyC1ue

NeptuNo is a Spanish player who was barely able to play with the team this year due to the pandemic. In fact, he only spent a couple of months on their active roster, before the coronavirus forced him into quarantine in Spain, away from his team in China. Before joining the team, Neptuno formerly competed with Philadelphia Fusion during the first two OWL seasons. Chara served as the team captain and starting Main Support for Charged during the 2019 and 2020 seasons. He is most well known for his aggressive Lucio playstyle and his solid in-game shot calling. His departure is a little surprising, considering the leadership role Chara held on the team.

I'm no longer with @GZCharge ,very obvious since I spent more time traveling and quarantined than with the team. I don´t regret the choice over NA teams, COVID just fckd me.. but the first 3 months I grew a lot in the team as a leader. Best team atmosphere ever, they all great 🙂

During the afternoon of October 16th, Charge announced further cuts, releasing Flex DPS player Cai “Krystal” Shillong and Flex Support player Qi “Wya” Haomiao, both of whom were signed to two-way contracts. Krystal joined Charge in July, after Hangzhou cut the player and took aggressive legal action against him for going MIA in 2019. Krystal never saw any real playtime though. Wya competed with Guangzhou during the first few months of 2020, before going inactive in April. The release of these two players is not particularly surprising.

[Offical] Today we part ways with Krystal and Wya. Thank you both for playing a positive role in our academy team, and we wish you best of luck in the next endeavor. pic.twitter.com/pfZnV0mMgg

On November 9th, Charge continued their roster cuts by announcing the departure of three of their founding members, Hitscan DPS player Jung-woo “Happy” Lee, Flex DPS player Charlie “nero” Zwarg, and Jin-seo “Shu” Kim. Happy and Nero were directly released, while Shu was transferred to the Los Angeles Gladiators. Throughout their time there, these three players took Charge from a middle ranking team during the inaugural season, to winning their first title in 2020.

Today we say goodbye to 3 founding members of our team. Thank you Shu, nero, and Happy for all your hard work and dedication throughout our first two seasons, you were great players and even better people. We are honored to watch you grow and succeed and wish you all the best. pic.twitter.com/UDm5awJgvX

In November, the team started filling in some of the vacancies left by their cuts. Their first new pick up for 2021 was Flex Support player Young-seo “KariV” Bak, who was signed on November 11th. KariV formerly played for L.A. Valiant and Toronto Defiant throughout the first three seasons of the Overwatch League. He served as the starting Main Support for Defiant throughout the 2020 season, and is a seasoned veteran of the game.

⚡️Ready to see who will join our team in 2021?
⚡️The first lightning strikes, formidable flex support power charging up.
⚡️Join us in welcoming Young-seo "KariV" Bak to help us write the next chapter of our story！ pic.twitter.com/wR2v2KPyhJ

Charge filled their second support slot by signing Chan-hee “Mandu” Kim on November 12th. Mandu was a rookie in 2020 and played with New York Excelsior. He spent the first six months on NYXL inactive, but eventually joined the active roster in June. He only played a few matches in 2020, but he put on strong performances when he did play and his history playing for O2 Blast in 2019 showed that he is a very talented player.

On November 13th, Charge announced that they had signed Chinese DPS player Zou “MYKaylee” Zijie. MYKaylee will be an Overwatch League rookie in 2021. He was most recently competing with Bilibili Gaming on the Chinese Contenders Circuit.

Before the Overwatch League season was even fully over, Guangzhou made adjustments to their coaching staff. On October 5th, they released Head Coach Hyo-jin “J1N” Cho, Assistant Coach Seung-min “Tydolla” Jung and Sun-woo “Sungwoo” Hong after their contracts ended. Tydolla was later signed by the L.A. Gladiators to be an Assistant Coach. J1N served as the Head Coach for Guangzhou throughout the last two seasons. Although he led the team to big improvements this year, it seems it wasn’t enough and the Charge want to go in a different coaching direction.

We are now announcing that our contracts with Head Coach J1N and Assistant Coach Tydolla and Sungwoo have ended. The three coaches have been leading the Charge since the very beginning, and it's with their hard work and professionalism so the team can make so many good results. pic.twitter.com/RYZNTibYHp

On October 29th, Charge announced that Ji-won “Arachne” Lee would be their new head coach for the 2021 season. Arachne was formerly an Assistant Coach for the San Francisco Shock during the 2020 season, and helped lead them to their second consecutive season championship in October. Arachne formerly served as the Head Coach of Talon Esports Overwatch team in 2018, but his new position with the Charge will be his first Head Coaching position in the Overwatch League.

This article will be updated as Charge makes more roster moves in the lead up to next year’s Overwatch League season.