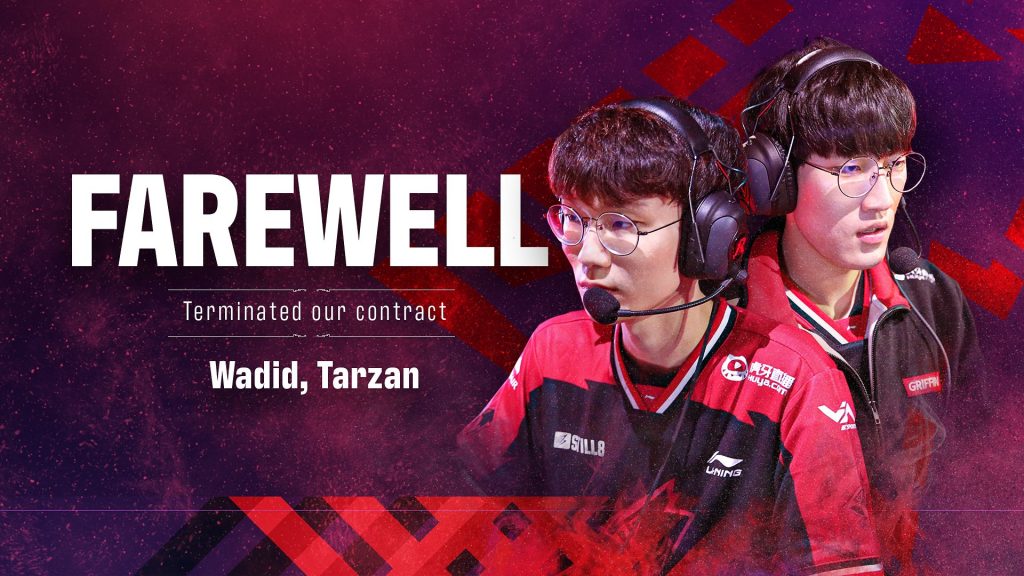 WADID, Tarzan and Griffin have come to a mutual agreement to exit the Griffin roster. (Photo courtesy Griffin)

Team Griffin continue their chain of announcement with the release of Kim “WADID” Bae-in and Lee “Tarzan” Seung-yong. Only three members of the Griffin roster remain with Yoo “NaeHyun” Nae-hyun Jeong “Kabbie” Sang-hyeon and Choi “Sword” Seong-won the only players still signed to the organization.

Tarzan and WADID leave the organization to no one’s surprise. The team has fallen from the LCK after being a Worlds quarterfinalist in 2019. Former teammate Park “Viper” Do-hyeon found a new home on Hanwha Life Esports a day after his official release. The likes of WADID and Tarzan are more than capable of finding new homes on an LCK level team.

These releases come shortly after their coaching staff left the roster. Griffin released Han “H-Dragon” Sang-yong and Lee “GBM” Chang-seok on May 19th, with Griffin’s first departures on May 17th.

WADID’s tenure on the Griffin roster was very short. Griffin signed WADID ahead of the LCK Relegation tournament on April 21st. With the roster failing to stay up, WADID now returns to free agency after serving less than a month on the team.

This can only be a good feeling for Tarzan, who admitted that former head coach had verbally and physically abused he and other players. The former Griffin roster members can move on with their careers and put this mess officially behind them.