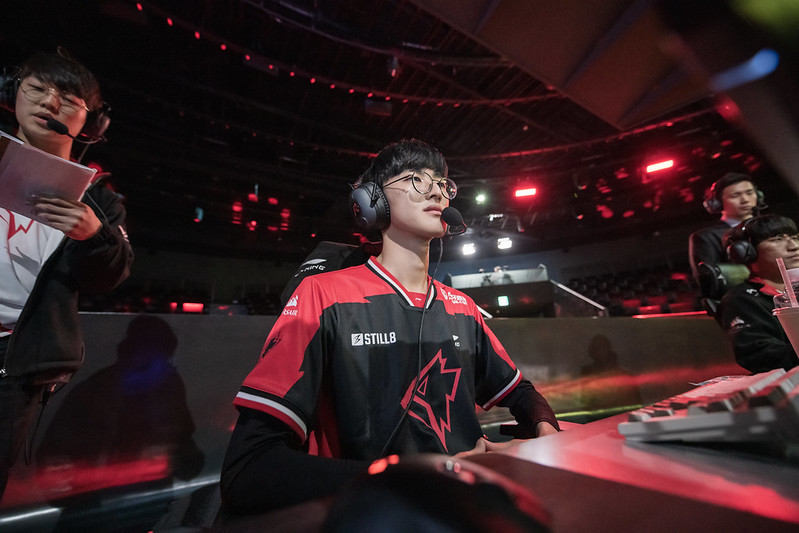 Team Griffin have announced the release of top laner Park “Untara” Ui-jin, mid laner Son “Ucal” Woo-hyeon, and ADC Park “Viper” Do-hyeon. This comes on the heels of Griffin failing to retain their LCK spot by losing in the Summer Promotion tournament.

Hello, this is Team Griffin. We have terminated our contract with Viper(Dohyeon Park), Ucal(Woohyeon Son) and Untara (Uijin Park) in mutual agreement. We thank them for giving in their best throughout their time in Griffin, and wish them all the best in their future. pic.twitter.com/GbfPpTK1eY

Untara joined Griffin prior to the Spring Split. He split time with Choi “Sword” Sung-won and played in 10 games for Griffin, including one game in the Promotion tournament. Untara is most known for his time with SK Telecom T1, but he has also played in China with Star Horn Royal Club and Turkey with 1907 Fenerbahçe. Untara will likely choose between a backup role in a major region or a starting role in a smaller region.

Ucal was brought in very late in the off-season as a replacement for Jeong “Chovy” Ji-hoon. He started all but one game for Griffin, but he could not replicate the success Chovy had with Lee “Tarzan” Seung-yong. Ucal had been a star player for KT Rolster and Afreeca Freecs and will still be in demand, but he has fallen down the mid lane pecking order after a pair of lackluster seasons. He could still be an upgrade for LCK teams like APK Prince, Hanwha Life Esports, or SANDBOX Gaming.

Viper is the most interesting of the released players. He has spent his entire career with Griffin and has been nothing but one of the best ADCs in Korea over that time, including this past split. A reunion with Son “Lehends” Si-woo on Hanwha Life makes too much sense, as Jeon “Zenit” Tae-gwon has moved on and Viper would be an immediate upgrade over Oh “Vsta” Hyo-seong. Hanwha Life have also shown the willingness to spend in free agency after grabbing Lehends and Lee “CuVee” Seong-jin this off-season.

The termination of these three players almost certainly spells the end for Griffin in the LCK. The Summer Promotion tournament was the last of its kind, as the LCK will move to a franchise model to begin 2021. Griffin were considered unlikely partners after the allegations of abuse that forced them to allow the release of Chovy, Lehends, and Choi “Doran” Hyeon-joon prior to the Spring Split. The LPL MVP Seo “Kanavi” Jin-hyeok also had his contract revised after it was revealed that Griffin made him sign a very organization-friendly deal that earned them a large transfer fee from JD Gaming.

Griffin still have Sword, Tarzan, Jeong “Irove” Sang-hyeon, Kim “WADID” Bae-in, Yoon “Hoya” Yong-ho, and Yoo “Naehyun” Nae-hyun under contract. Griffin will still have to field a roster for the upcoming Challengers Korea season, but it seems likely that Tarzan will be moving on. Though he had a poor season, Tarzan will still be in demand if he hits the open market.

The LCK resumes with the Summer Split on Wednesday, June 17th.