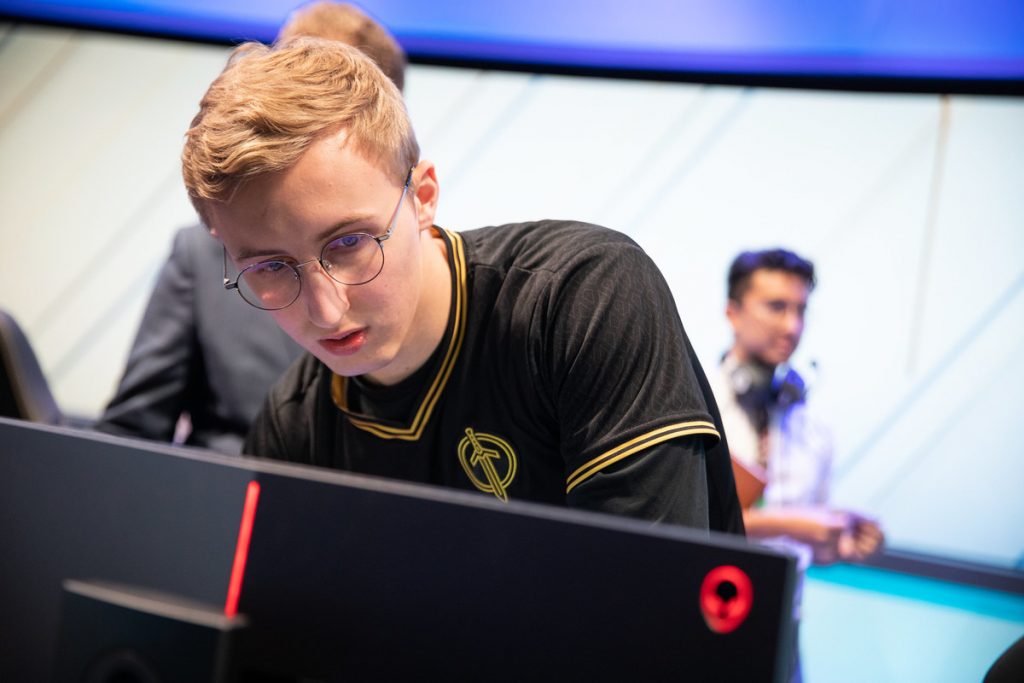 Goldenglue is stepping down as a player to continue his career as 100T Academy’s next head coach. (Photo courtesy Riot Games - Tina Jo)

Mid laner Greyson “Goldenglue” Gregory Gilmer has announced his retirement from professional play. He will transition to his next career as the Head Coach of the 100 Thieves Academy team.

Welcome @GoldenGlue as our 2021 League of Legends Academy Head Coach!

Greyson has been playing LoL competitively for the past 7 years. We’re excited to bring his experience and game expertise to 100 Thieves under a coaching role for the 2021 season! #100T pic.twitter.com/fe01nzHTKQ

Goldeglue’s decision comes after a year in which he spent the majority of his time starting in the LCS. He started every game for the Golden Guardians in the Spring Split before being benched for Tanner “Damonte” Damonte to begin the Summer. Evil Geniuses then acquired Goldenglue in the middle of the Summer, opting to start he and Heo “Huni” Seung-hoon over Collin “Kumo” Zhao and Daniele “Jiizuke” di Mauro to end the season. EG finished sixth in the Summer regular season before losing 3-0 to Cloud9 in the playoffs.

But 2020 was not the only year that saw Goldenglue get swapped around midseason. Since debuting in the LCS with Dignitas in 2014, Goldenglue has played on roughly 12 different organizations. That also doesn’t differentiate between playing on both the LCS and Academy rosters for a number of different teams. Goldenglue’s longest stints were with Team Liquid from May of 2016 to the end of 2017 and Cloud9 from 2018 to April of 2019.

Goldenglue was known primarily as a mage player in his career. His 40 Orianna games double his next most played champion (Azir), and you have to go down to his seventh most played (Yasuo) to find the first non-mage. As his career arc suggests, Goldenglue was a player who was often stuck between being too good to play in Academy and not quite good enough to stick around in the LCS long-term. His greatest value was in being a North American resident in a pool full of import players.

The end of a decade long chapter

Though Goldenglue admits that he: “didn’t get to achieve everything [he] wanted to in [his] career as a player,” Goldenglue is set up for immediate success in the second act of his career. 100 Thieves are loaded with talent and have already secured one of the strongest academy rosters in the league. Mid laner Tommy “Ryoma” Le and support Philippe “Poome” Lavoie-Giguere have LCS experience with 100T, while ADC Fatih “Luger” Güven was one of the best ADCs in the TCL. Meanwhile, top laner Milan “Tenacity” Oleksij and jungler Shane “Kenvi” Kenneth Espinoza are thought of as the future of the 100T main roster.

With that roster will come huge expectations in his first year as a coach, but the pressure is nothing Goldenglue hasn’t already dealt with as a player. After already showing he can dominate Academy as a player, Goldenglue will try to do the same thing as a head coach.