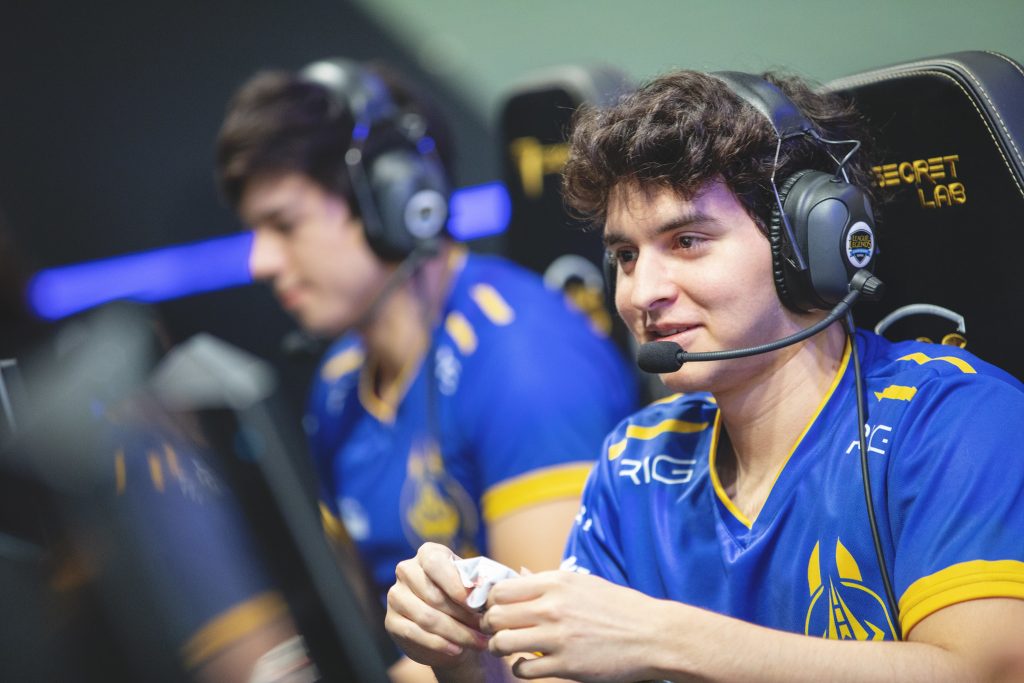 Juan “Contractz” Garcia believes friendship off the Rift is boosting the Golden Guardians in Summer. (Photo by Colin Young-Wolff/Riot Games)

Golden Guardians faced major setbacks when they first joined the League of Legends Championship Series. Two consecutive tenth-place finishes in their opening year in the League were disappointing, to say the least. The backroom staff knew a roster overhaul was needed if they wanted to keep pace in North America.

Now, just six months after building a new team that saw just bot laner Matthew “Deftly” Chen remain in the starting lineup, the squad is a single win away from second place heading into the league’s fifth week. Hotspawn’s Isaac McIntyre recently had the pleasure of speaking with the team about their results and their new approach.

While many teams often credit resurgent results with elements like ‘pure dedication,’ or some secret strategy they’ve brewed up behind the scene, players in the GGS system know they have something perhaps even stronger up their sleeves – mateship.

Most of the playing roster for Golden Guardians were left adrift after leaving their old organizations or becoming surplus to desire. Three-time LCS champion Kevin “Hauntzer” Yarnell left Team SoloMid, Juan “Contractz” Garcia was replaced in Cloud9, and veteran Danish mid laner Henrik “Froggen” Hansen had been all but retired for seasons.

When put together, however, their bond developed nearly instantly. A getting-to-know-you period early in Spring quickly rolled into a team who were playing for each other and were enjoying being friends away from the Rift as well.

“All five of us are way closer friends now, which means we can work through our problems and figure out what we’re messing up in the game, then fix that,” Deftly told Hotspawn of the newfound synergy between the Guardians. “We’ve really come together, and it feels really good.”

It’s not just their friendship off the Rift that has helped. The team made the call to throw off the shackles of the LCS meta, bringing out picks that were strong for their players rather than in the tier list. Kim “Olleh” Joo-sung brought out his signature Tahm Kench (71.4 percent win rate in 28 games), while Froggen played anything from Anivia to Lux.

“I think it was about halfway through our Spring split where we found our stride, and that came from the fact that we started playing what we were good at rather than just what the meta was, whatever that may be, and we just sort of stuck with it,” Deftly explained.

It’s not a place that the 21-year-old bot laner has found himself in during his LCS career before. After graduating from the Challenger Series when he transferred from eUnited to GGS, Deftly copped 27 losses and scored just nine wins with his top-level team.

To start the split with second place in touching distance after eight games is certainly a nice change of pace for the North American marksman. The moment is one that he’s just enjoying. Even better for him, he knows his squad can get to even higher levels.

“It feels really good, I’ve never had a start like this before. All my previous starts were like 0-4, or even 0-8, and it feels really good to be on the winning side of things. I’m really grateful for my teammates. As long as we keep playing our game, and Jimmy doesn’t give us troll drafts, we should be fine in the long run.”

Contractz, who joined Golden Guardians after making way in his old Cloud9 roster for three-time LCS champion Dennis “Svenskeren” Johnsen, agrees that GGS is “on the rise” because of their closeness in practice, on-stage, and out of the game.

After getting his big break with C9 in 2017, Contractz defined the team with his fast-paced and aggressive jungling. Two years down the track from his explosive splits in the blue and white, the North American star is more retrospective about many of his games on the Rift in the Championship Series.

After making playoffs in Spring, the Golden Guardians are aiming even higher in Summer. Image via Riot Games.

The team’s Week 4 loss to TSM hangs heavy on the mind of the young roamer. A victory over the former LCS champions could have catapulted GGS just one win behind Team Liquid in first place, and Contractz knows it.

“We just threw at bot lane inhibitor, and that was the second game that we’ve done that, so we really need to focus on making the same mistakes over and over again, and then removing that from our game,” Contractz said after the 50-minute defeat.

“What is good about it is that losing games on your own mistakes feels a lot better than losing the game because the other team is just plain better than you. It sucks to lose because you have to claw your way back to the top seeds after bad results, but at least we know what mistakes we’re making and that means we can improve on them.”

that game blew, next week will be better!!!

For a young player who has felt voiceless in some of the teams that he’s played on in his career so far, the ability to speak to his friends around him in GGS has been one of the best things that could have happened to the developing jungler.

“Being able to talk with my friends about what we are doing right and wrong is the biggest thing for me. I’ve been far more quiet and reserved in the past, and if I needed something or wanted something done differently I wouldn’t verbalize it and that wouldn’t work.

“We’re all improving at talking now, and we’re all being a team. Last split I think we were really disconnected when it came to decisions both in-game and in champion picks, but now we’ve put that behind us and we’re really coming together. It’s so nice to see.”

Now that the star-studded squad has finally settled, it may be time for a golden hue to wash over the LCS. Team Liquid have looked dominant in Summer, but TSM and C9 were shaken by torrid Rift Rivals campaigns, and the battle in the standings is as close as it can get.

GGS face second-place OpTic Gaming this week, before coming up against an Echo Fox outfit that pulled the trigger on signing former rookie of the split Mike “MikeYeung” Yeung from Team Liquid. With a 2-0 weekend, Golden Guardians could move as high as equal-first.

“We’ve improved a lot this split, and we only have more to work on,” Contractz said of the team’s chances to shoot for a championship ring, and Worlds. “I think that everyone is still learning and we are trying to learn as a group. We’re definitely on the rise.”