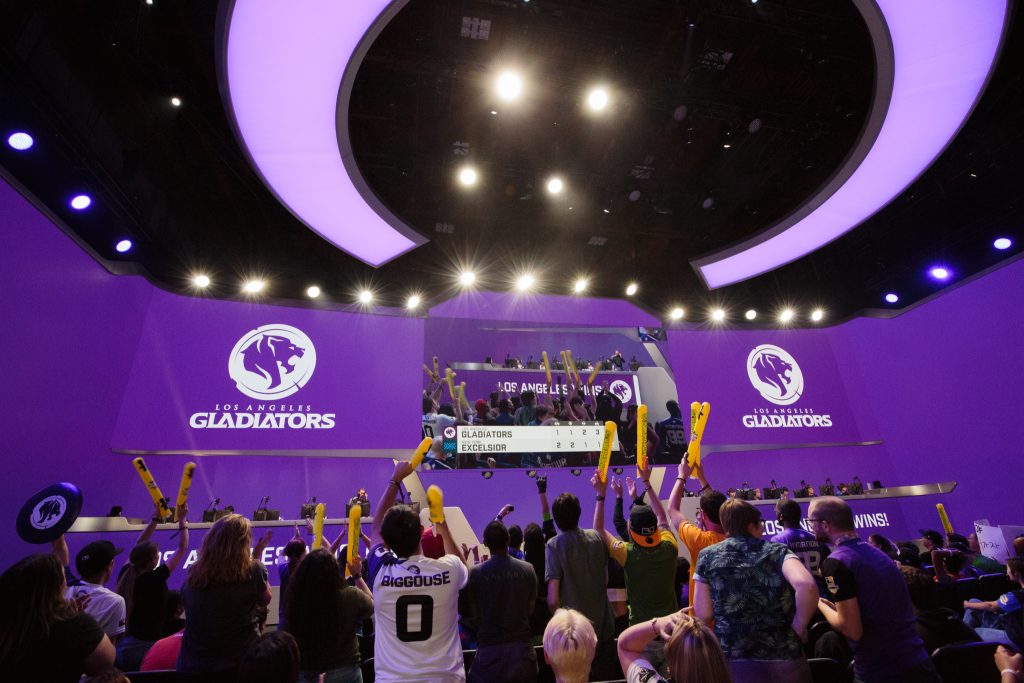 The Gladiators faced the Valiant for the first time this year. (Photo courtesy Robert Paul for Blizzard Entertainment)

Week 11 of Overwatch League (OWL) featured 9 matches spread across four days of intense competition. The Gladiators evened the score with their rivals the Valiant, Shanghai continued to dominate Asia, and the Mayhem upset the Paris Eternal. It was a great week of Overwatch League, filled with action, close matches, and absolute blow outs.

Gladiators and Valiant tie up the Battle for Los Angeles

The Gladiators won Thursday’s series in a very close 3-2 battle. Although they lost, the Valiant came in with a unique plan and executed it very well, ultimately coming up just short of the victory. Going into half time, the match was tied at one map per team. The Valiant came out strong after half time, winning Hollywood to set up their match point. However, in the end, the Gladiators won the next two maps on Route 66 and Busan to take the series.

The Gladiators spent the first few maps of the series struggling to answer Kai “KSP” Collins’ impressive Ashe plays. The Valiant played a Pharah/Ashe DPS composition at various times throughout the series, which definitely threw the Gladiators off guard. With McCree and Widowmaker banned, Ashe was one of the only options for hitscan. Ashe is widely considered to be one of the worst hero picks in the game, however KSP made her look like one of the best heroes, popping off repeatedly. The Gladiators tried to counter KSP’s Ashe in various ways before eventually mirroring the Valiant team composition, after which they were able to find more success.

hey @LAValiant please can u not play this trash comp

The matchup between the Gladiators and the Valiant showed off a clash of the two major style options in the week 11 meta: offensive and defensive. The Gladiators played an offensive rush composition which featured Mei and Reaper and was designed to aggressively push the Valiant. The Valiant on the other hand played a defensive containment composition, trying to outrange and outzone the Gladiator squad. The two maps which the Valiant did take in the series, Hollywood and Hanamura, offer far more high ground opportunities. If the final map had featured more high ground, this series could have very easily gone the other way.

Indy “Space” Halpern won player of the match. Space previously played for the Valiant in 2018 and 2019 before being traded to the Gladiators in 2020. In his post game interview, Space threw some playful shade at the Valiant team by implying that the Gladiators have a superior training facility. Thursday’s game was Space’s first opportunity to defeat his former teammates, and he delivered mightily while playing as both D.Va and Sigma. Space landed crucial opening picks in several important teamfights throughout the series and definitely deserved the player of the match title.

Shanghai defeated the Hangzhou Spark in a 3-0 match on Saturday and the Chengdu Hunters in a 3-0 series on Sunday. After their week 11 victories, Shanghai is now sitting on an excellent 6-1 record which places them in the clear top slot for the Pacific East division, at least until Seoul Dynasty plays more games.

The Dragons showed off their impressive coordination and timing in both matches, proving that good fundamentals can win games even without flashy plays. Using their disciplined and organized approach, the Dragons were able to pick apart the weaknesses of both the Spark and the Hunters, showing us why they are the best team currently competing in Asia.

One could argue that the Dragons didn’t technically sweep the Spark. The Spark did manage to play the Dragons to a draw during one map, but they ultimately failed to win any maps. Both the Dragons and the Spark played a double shield composition with Mei, Hanzo, and Reaper on DPS. Due to the lack of long range damage dealers, the series was marked by aggressive deathball plays from both teams. Jae-won “LIP” Lee won player of the match for his Hanzo and Reaper plays. Throughout Saturday’s series, Lip pulled off sneaky flanks which put him in position to consistently shred the Spark backline and win important team fights.

The Florida Mayhem didn’t just defeat the Paris Eternal on Friday, they buried them in a 3-0 series. This victory was a huge statement from the Mayhem. Don’t count them out yet. Although the Eternal might look better on paper, it was the Mayhem that looked like the favorites in week 11.

The Florida Mayhem has had a rough start to Season 3, losing several matches at the very start of the season. The Mayhem entered Friday’s match with a 2-4 record, whereas the Paris Eternal entered with a 5-3 record. However, it’s important to consider who the Mayhem have been losing to. So far this season the Mayhem have lost to the top ranked Philadelphia Fusion, the ever competitive Atlanta Reign, and the top tier New York Excelsior. It’s hard to say what Florida’s record would be if they had not played the best of the best.

This week’s hero pool did not work well for the Paris Eternal. The Eternal play best with their star maintank BenBest leading the way on Reinhardt. Most of the Eternal’s strategies rely on Reinhardt-centric compositions which allow them to capitalize on BenBest’s legendary aggression and mastery of positioning. Without Reinhardt available to play, the Eternal turned to Da-un “NoSmite” Jeong on the Orisa, which did not work out as well as they had hoped.

Florida played a pretty standard Double Shield composition with Mei and Reaper on DPS. Jun-ki “Yaki” Kim  played Mei and was able to generate a huge amount of value from his abilities, especially when working closely with Sang-bum “BQB” Lee on the Reaper. Yaki was named player of the match for his significant contributions as Mei. The Mayhem DPS core played at a very fast pace throughout the series, pushing the Paris Eternal front line with a ferocity that seemed to consistently take the Eternal off guard.

Our first @SoFi #MoneyMoment from our game vs @ParisEternal is a flashy team play from our first map – a coordinated effort that kept us moving fast in our 3-0 victory! Here's Coach @KukiOW to walk you through the play. #LightItUp    #BringtheMayhem pic.twitter.com/rU5TdDe6lI

The Mayhem’s aggressive pace and positioning was really bad news for the Paris Eternal, who came into week 11 planning to play Doomfist instead of Mei. Doomfist is a great aggressor, but he is not necessarily good when he is the one being attacked. Even when it was clear that Nicolas “NiCOgdh” Moret’s Doomfist pick wasn’t generating value, the Eternal refused to switch their DPS composition around which ultimately cost them the first two maps.

In the final map, the Eternal finally mirrored the Mayhem’s composition, but it was already too late. The Mayhem took their momentum from the first half to roll over the Eternal on Numbani to secure the sweep victory. The Florida Mayhem definitely looked like a top tier OWL team in week 11.

The most exciting match of week 11 was most definitely the Dallas Fuel playing against the San Francisco Shock. Over the past few weeks, there has been some sort of awakening in the Dallas Fuel. They are playing much better than anything we saw in OWL season 2. The Dallas Fuel came into week 11 on a two game winning streak and they were hoping to continue that streak against the Shock team. Although it was the Shock that ultimately won the series 3-2, the Dallas Fuel still looked absolutely incredible throughout the series.

The Dallas Fuel were considered the heavy underdog going into this match. Afterall, the SF Shock were the Season 2 champions. To everyone’s surprise, the Dallas Fuel took the upper hand in the second half of the series, holding a 2-1 lead. The Fuel had two match points to secure the win, but they ultimately choked and allowed the series to slip through their hands. Map five came down to one final point, but Hyo-bin “ChoiHyoBin” Choi’s Sigma plays combined with incredible support from Minki “Viol2t” Park and Grant “moth” Espe ultimately swung the map and series to the Shock.

Moth was awarded the title of player of the game, after pulling off some impressive Lucio plays. Among other notable plays, Moth combined with Myeong-hwan “Smurf” Yoo’s Orisa to halt/boop three members of the Dallas fuel to their death on map 1, Linjang Tower.

Although the Shock lost that first map, it was an impressive way to start the series and he continued to deliver on the following maps. Moth plays a very aggressive Lucio, which allows him to make plays which more passive Lucio’s are rarely in position to make. Both Moth and Violet continue to carry the Shock’s success on their supportive shoulders week after week.

Some may second guess the Shock for almost losing to such a low ranked team. However, this was not a case of the Shock almost losing to a terrible team. The Fuel looked like a high caliber team on Saturday. They have elevated their game in the past few weeks, it will be interesting to see if Dallas can keep up this momentum.

Toronto defeated the Boston Uprising 3-1 on Friday. Both of these teams are widely considered to be low tier, but this match is notable because Toronto lost their head coach this past week and Boston has lost several players in the past month. Although Toronto may have won this match, both teams were struggling throughout the series.

The Toronto Defiant entered this match without their coach Félix “Féfé” Münch, after he retired this past week. The Defiant have struggled to find success in OWL season 3 and are currently sitting on a 4-5 record even after Friday’s victory. Perhaps the departure of Fefe is a blessing in disguise and a new coaching staff will bring a fresh perspective to the Defiant.

The Boston Uprising also entered this match down players, as they continue to struggle with player retention. The Uprising lost Gabriel “Swimmer” Levy this past week, bringing them down to only 6 active players on their roster. Several players have left or been terminated from the Uprising roster in the past month. It’s hard to expect any level of success from a team who loses a new player every single week. 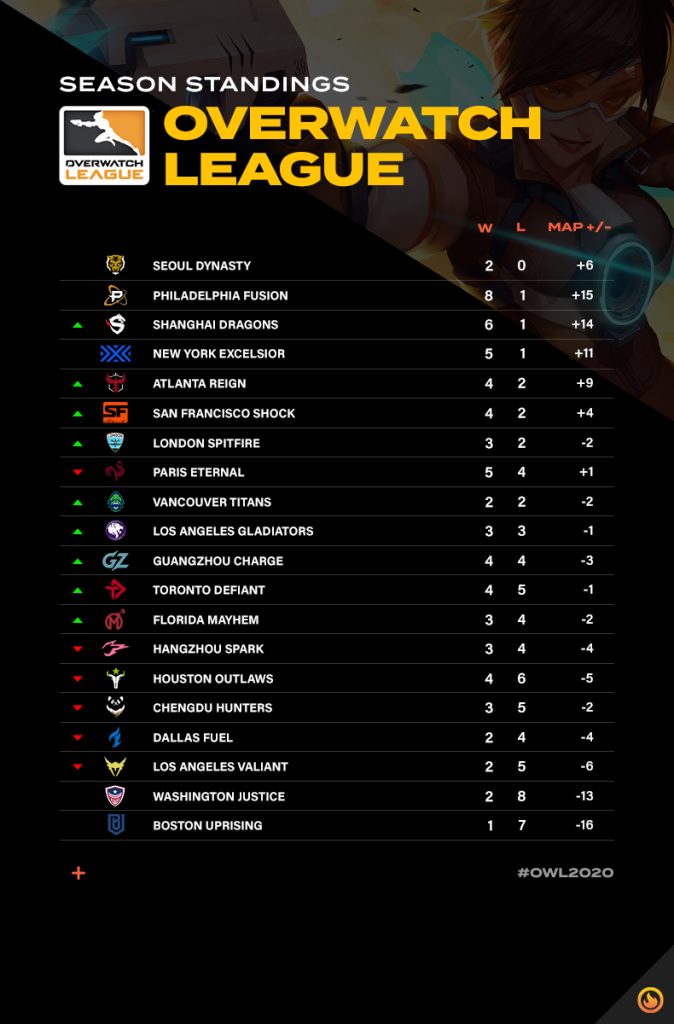