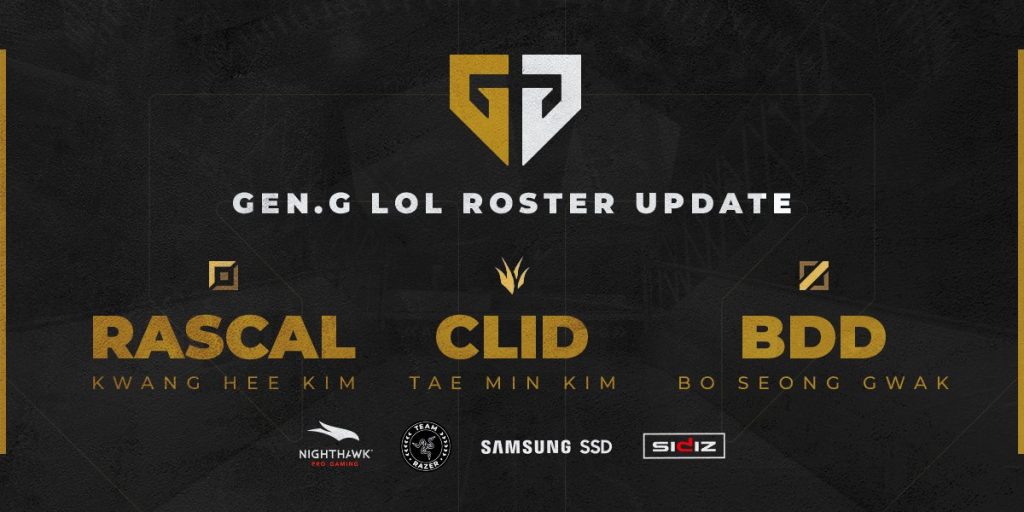 Gen.G has reshaped their roster and built around Ruler in the Bot Lane (Image via Gen.G/Twitter)

The League of Legends roster shuffle is still in full effect, and Gen.G is the latest organization to make waves in the competitive scene. Gen.G Esports announced the newest additions to their League of Legends team through a livestream with former team member Ambition. Kim “Clid” Tae-min, Kim “Rascal” Kwang-hee and Gwak “Bdd” Bo-seong have officially joined the organization and have cemented Gen.G as a competitive powerhouse.

We’re really excited to announce our newest additions to the Gen.G @leagueoflegends team: Clid, @Rascal_LoL1, and @Bdd990301! We ask our Gen.G #TigerNation fans to give them a warm welcome! pic.twitter.com/oX1zNteb3q

Gen.G has had an interesting history in the League of Legends competitive scene, starting with their previous team winning the world championship in 2017 under the Samsung Galaxy name. In 2018, the team was acquired by Gen.G and had a rough year, ending with the worst Worlds performance in history by a Korean team. 2019 was another rough year for the team that resulted in Gen.G not qualifying for Worlds and a complete overhaul that saw the departure of all players besides Ruler and Life.

The new plan was to build around Ruler, one of the best players in the world, in order to get the team back on track. The signing of Clid, Rascal, and Bdd compliments Ruler very well, and Life remains under contract until 2020 which gives the team enough time to prove Gen.G is still a very competitive team to keep an eye on.

The latest lineup will serve as a fresh start for the organization and allow them to redeem their rough performance throughout 2019. It will be interesting to see if Gen.G can make another successful run at the World Championship.