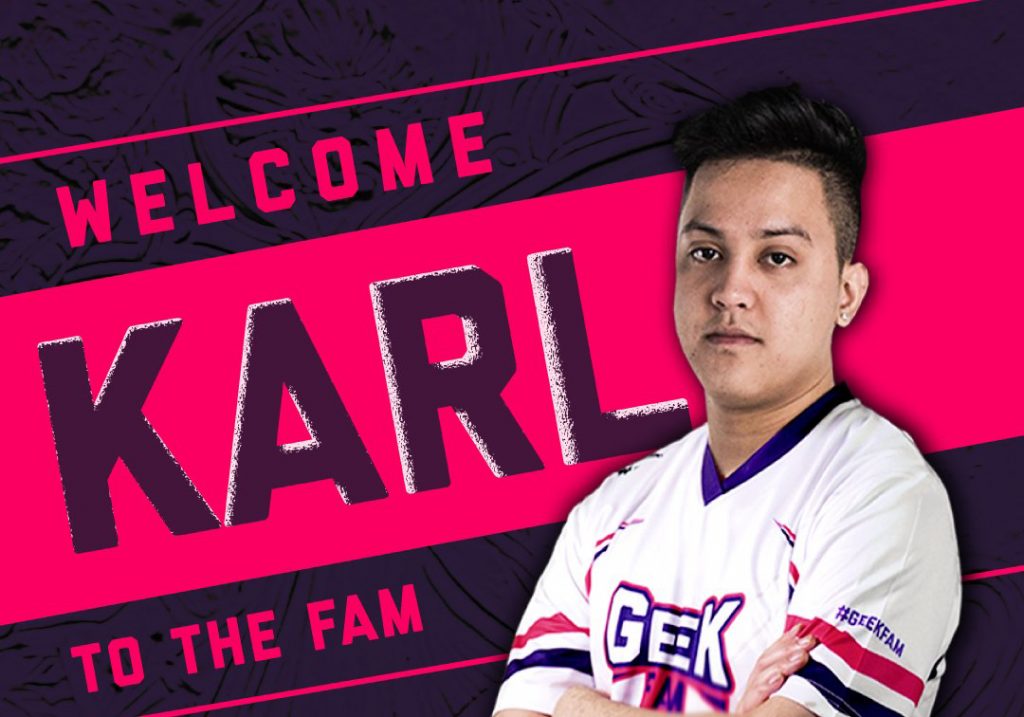 Geek Fam have announced their new mid laner, just a few hours after the departure of Ryoya (Image via Geek Fame)

Hey Fam! Let's give a warm welcome to our new geek to the team! Geek Karl will be our new midlaner! Welcome to Geek Fam, Karl! 💪😎#GeekFam #WhereGeeksBelong #OnceAGeekAlwaysFam #SummonYourStrength #PredatorGaming pic.twitter.com/hxswQZisxm

The move comes just 10 hours after Geek Fam announced it was parting ways with their previous mid laner Eric “Ryoya” Dong. Ryoya was part of a new roster first brought in on September 18, which marked the opening salvo of Geek Fam’s 2019-2020 Dota Pro Circuit campaign.

Hey fam, we have decided to part ways with our midlaner, Ryoya.

Thank you to Ryoya for giving your best for the team. We wish you all the best in your future endeavours.

To our fams, please keep an eye on our page for more updates to our roster.#GeekFam #OnceAGeekAlwaysAFam pic.twitter.com/UbzYmcdKIN

That lineup was initially successful, as the team was set to participate in ESL One Hamburg 2019 following a decisive sweep of the Southeast Asia qualifiers. However, visa issues would mean the team never reached the event, and in subsequent online qualifiers for the first and second Majors, Geek Fam found themselves instead of fighting it out for a spot in the Minors.

With a fifth-place finish at DOTA Summit 11, and a trip to the WePlay! Bukovel Minor 2020 on the horizon, Geek Fam is looking to adapt their play in the wake of mixed success. And the move to Karl as their starting mid laner is chief among these adaptations.

A somewhat unknown player, Karl has been active on many minor SEA Dota 2 teams over the past four years, most recently for Team Amplify. That team narrowly missed out on a spot at TI9, having clawed its way into the Southeast Asia Regional Qualifiers from the open bracket. Unfortunately, the squad would fall in the first round of the playoffs, to eventual runners up Team Jinesbrus. During that even Karl was one of the primary carries of that lineup, helping them to their impressive 5-2 group stage record.

Alright, Fam! The team will be looking to battle it out in Bukovel for the last Major slot!

Geek Fam are next scheduled to compete in January at the WePlay! Bukovel Minor, where along with seven other stacks, they’ll attempt to take home a victory, and secure a spot at the upcoming Major. The event begins on January 9 running until January 12, and can be caught live on WePlay!’s series of Dota 2 Twitch channels.