G2 Wunder: “Suning might be the best Chinese team” 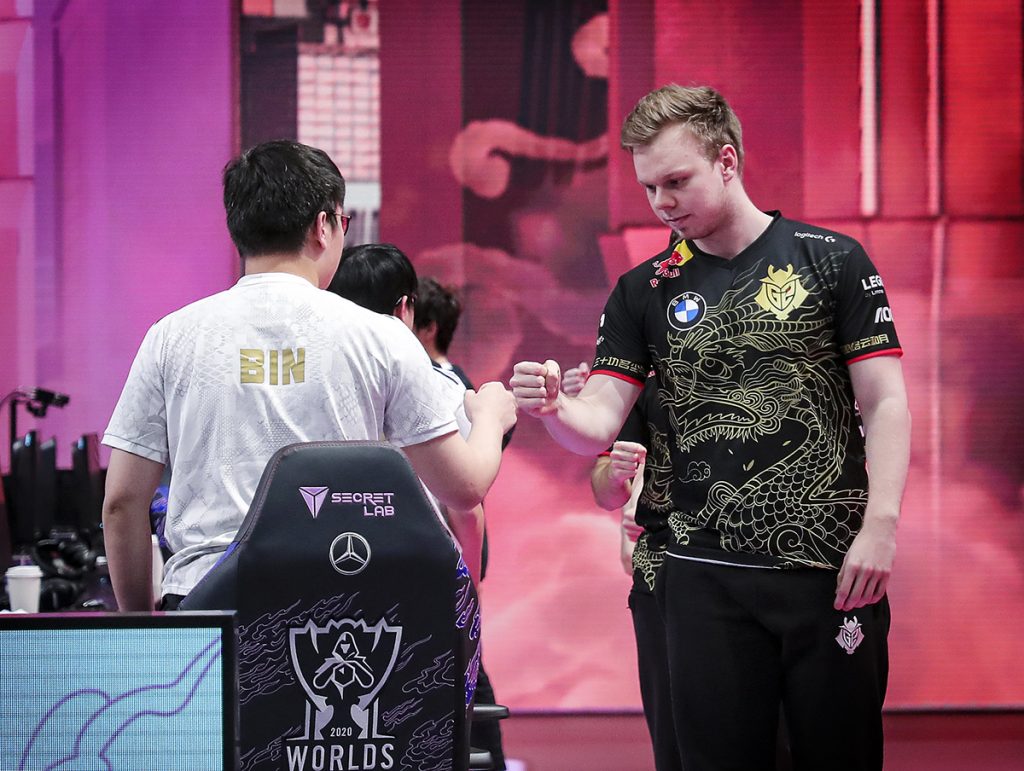 Despite playing with no game audio, Wunder held his own and helped G2 past Suning at Worlds 2020 (Photo via David Lee | Riot Games)

They’ve only played one match, but already G2 Esports may have given League of Legends fans the most memorable match in the League of Legends World Championship Group Stage. Against LPL third seed Suning, the champions of the LEC played in a wild rollercoaster of a game. It seemed lost for G2 when Suning obtained the Dragon Soul, but G2 persevered and impressively turned it around—even though they almost threw their regained lead again. A win is a win, though, and G2 is off to a good start at Worlds.

After the victory, G2 top laner Martin “Wunder” Nordahl Hansen sat down with us for a chat. He gave us his thoughts on the close match against Suning, revealing he was playing the entire game with a handicap. Wunder also spoke about his time in quarantine, practicing with his teammates, and how he feels about the level of play of European and Chinese teams this year.

Hotspawn: Welcome Wunder, congratulations on the victory! That was a hectic match against Suning—what’s going through your mind right now?

Wunder: My first thoughts on the game… Well, it of course was our first game back on-stage since a long time. We stopped playing on-stage completely from week eight of the Spring Split. For sure, there were a lot of nerves from everyone. I could hear in the communication that there were a lot of things going on. There were a lot of calls that we normally probably wouldn’t make. There were a lot of skirmishes we took without making sure that every step was covered such as waves et cetera. So I ended up dropping a little bit of CS. I thought my lane was going decently, and then it turns out I was 40 CS behind so I was like: “What the fuck is going on?”

I think we played really well, all things considered. Suning is a very, very strong team for sure. Chinese teams in general are very strong—we usually lose to them. *laughs* So I’m pretty happy that we beat them, of course. It’s a good start, winning the first game of the Group Stage. It’s usually a pretty good tell.

Hotspawn: I saw on Twitter that you played the first few minutes without audio… What happened there? *laughs*

Wunder: Aah, I went through all the checks as you usually do. Then I listened to my teammates only. They were all talking a lot of course. I don’t really need sound to play a Practice Tool game, which is what we warm up in usually. So I didn’t even notice my sound was off. Then I went into the game and I was like: “Wait, I can’t hear anything.” I didn’t fix it for the entire game because I wanted to just focus on the game. I was like: “I’ll play through it.”

Crazy.. Realised I played without ingame sound 4 minutes in 🙃 For sure felt like we got our nerves under control later in the game

Hotspawn: You played without audio the entire game?!

Wunder: Yeah without in-game sound. I could hear my teammates of course. I’m not used to it, so I thought “…oof.” I couldn’t hear people recalling, couldn’t hear any of that stuff. So I was wondering what was going on.

Hotspawn: So you were just going for that Mythic challenge, then.

Hotspawn: We’ve actually not heard much from you guys about going through quarantine and practicing in these weird circumstances. How was this period for you?

Wunder: Quarantine was a pretty ok experience for me personally. Of course, it’s not something I would like to live in every day, in isolation and not being able to leave your room. I felt decent with the fourteen days of quarantine. There were some others on my team who were a bit unsure about how they would handle it, but I think we handled it pretty decently all things considered. Our scrim practice during the quarantine was not as good as it could’ve been maybe, but there were a lot of factors that played into that. I think we just thrive more when we can actually talk face to face and solve a lot of things. You can just explain it better to each other. We have for sure picked up more on the scrim department ever since exiting the quarantine.

Hotspawn: Did you notice that your team got ‘kicked into a higher gear’ in terms of practicing when you left quarantine?

Wunder: Yes. We have had very strong scrim partners pretty much every single week since we arrived. At the start we took it a bit lighter and we booked some… I guess you would call it ‘lower-tier teams’ so we could get into the mood again and grind it out. But I think we have gotten better scrim results, I guess, even though it doesn’t actually mean much. But we feel like we’re progressing at a pretty steady rate right now in the last couple of days.

There were some bumps in the road, of course. I think that there were times where losing to the Asian teams didn’t feel really good. We didn’t lose motivation, but we were kind of lost in how to draft, how to make things work. If you’re losing a lot of games, you don’t know what works and what doesn’t, right? But I think we’ve picked up on it in the last few days at least. So that’s good.

Hotspawn: G2 is a team that can need some time to warm up to get into that ‘tournament flow’. It seemed like this happened during the game at Suning, this time around, where you won a game that seemed lost. Do you feel like you’re already fully in the tournament mode now?

Wunder: We still need to get used to it, for sure. As I said, I felt like there were definitely some nerves at the start of the game. We did get better towards the latter parts of the game. I think Mikyx and Caps really pulled our weight in this game. I think Mikyx was playing insanely well on Bard. He didn’t even think so, after the game. But I told him that he was for sure playing out of his mind. It’s not like we’re all performing with 100% consistency. It’s our first game back on stage, so I can’t really expect us to play the same way as we played from our home during the LEC basically the entire year.

I think all of our players got it, though. We have all been here before, so there is no reason why one of us shouldn’t be able to perform. I think this game was a really good start for us. We managed to get the win, even though it was under these conditions, so I think we’ll have a pretty good tournament from now on.

Hotspawn: About your group: Machi Esports looked very strong in their win against Team Liquid—which may say something about Team Liquid. Still, do you guys see Suning as the strongest opponent in your group?

Wunder: I actually think Suning might be the best Chinese team, based on practice. The other two… Well, I guess LGD is also in the Group Stage now, but I don’t really consider them. So I’m talking about TOP and JDG because they were already in the Group Stage. I think TOP, as a tournament favorite, is probably a little bit overrated. I think Suning and JDG are at least as good, if not better than TOP. Maybe the meta doesn’t favor TOP right now, or maybe they’re just very good on-stage, you know? You never know how they’re actually winning. But yeah, Suning is for sure the strongest team in our group, next to us. I think, in general, the Asian teams are way above NA and some EU teams as well. As we could see, MAD Lions lost in the Play-Ins.

Hotspawn: Overall, how do you feel about European teams then? Rogue beat PSG Talon, Fnatic, managed to defeat TSM… Do you think Europe has a decent chance this World Championship?

Wunder: We haven’t really practiced a lot against European teams, to be honest with you. We have mainly scrimmed Asian teams, actually. But I think Rogue usually does pretty well best-of-ones, and they won pretty convincingly in their first game. Even though it was not the strongest opponent, I guess. I think Rogue and Fnatic for sure could make it out of the Group Stage. Rogue has a bit of a rougher group. I think Fnatic is not a safe bet either, since in their group anything could happen. But I do think that I would predict Fnatic to make it out of their group. I think both of them are actually pretty strong teams. It would not surprise me if Rogue upsets either of the teams in their group. Anything could happen. I don’t have full faith in Rogue making it out, just because of the strength of their group, but I think in a different situation it would be better for them. They could have made it out of our group, for example.

Hotspawn: To round up the interview, do you want to say anything to those who have been supporting you and G2?

Wunder: Well, hopefully, we didn’t let you down in the first game. It was quite a banger, right?

Hotspawn: You gave them quite a heart attack, probably. *laughs*

Wunder: Yeah, we gave them a heart attack. *laughs* I think you should prepare for many more of those if you’re a fan of our team. Even in Europe, we had some base races or pushes that didn’t work out. So prepare for that. Hopefully, you enjoy watching our games, and hopefully we make it far for EU and for our fans. I think this year we could definitely make it. Even though some people might say the gap has widened, I think we are still in contention for the title.

G2 play their next match at Worlds against Machi Esports at 10 a.m. CEST.