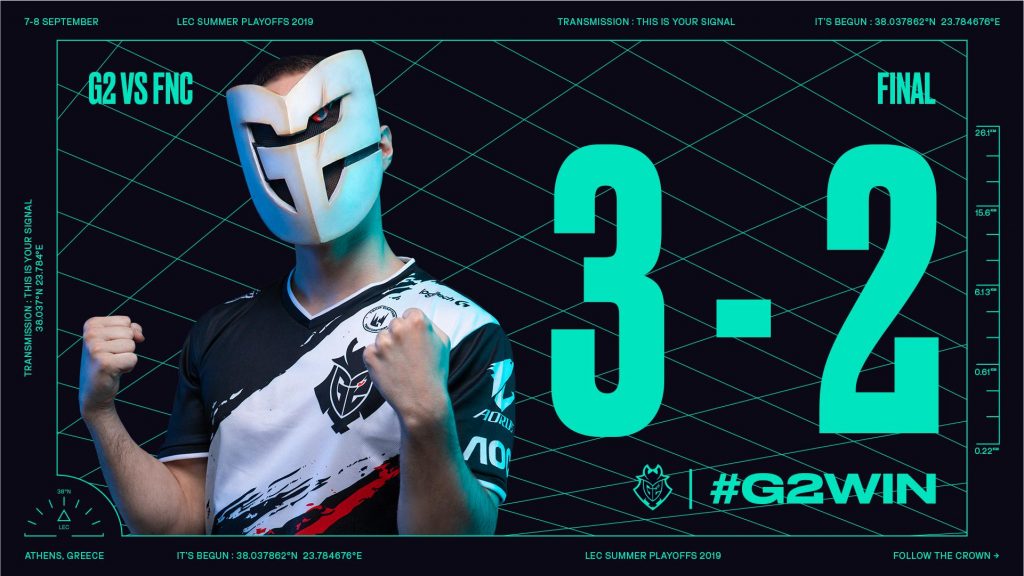 The LEC Summer Playoffs 2019 reached its dramatic conclusion this weekend in front of a jubilant crowd in Athens, Greece. On Saturday, Fnatic took on FC Schalke 04 in a victorious effort, before advancing to the finals, to face G2 Esports on Sunday. There, in a thrilling five-game series, the very best Europe has to offer put on a clinic on how League of Legends is meant to be played, with G2 ultimately emerging victorious.

Can't wait to go out and play in a few, time to show what we can do 👊🏻

But before this, FC Schalke 04 would attempt to upset Fnatic, and tell a different finals story. Schalke was undisputedly an underdog headed into their series with Fnatic. And yet the level of disparity between the two teams was so pronounced in their defeat that it defied all expectations. Fnatic, for their part, was playing with their eyes ahead to the finals. When mistakes happened, they seemed to be because their heads were in the next series, not this one.

Ultimately Schalke performed admirably, with veterans Andrei “Odoamne” Pascu and Kim “Trick” Gang-yun desperately attempting anything they could to secure victory. In the moments when Fnatic looked to be losing their edge, it was always this jungle/top combo that was causing the problems. But this wasn’t enough, as Schalke fell 0-3 to their opponents, setting the stage for a dramatic rematch of last week’s incredible Fnatic and G2 clash.

It just wasn't our day. GGWP @FNATIC! We can be proud on the progress we made up from Spring Split until now. We will bounce back from this and focus on the upcoming regional finals! #SchalkeNullFear | #LEC pic.twitter.com/5YZnhgzaLW

As G2 Esports and Fnatic took the stage on Sunday, the tension was palpable. Both sides had something to prove, with Fnatic tired of playing second fiddle to G2’s dominance, and G2 eager to show how far they’d come since their last humiliating finals defeat to Fnatic in 2018. Right out of the gate, Fnatic was almost paralyzed by the required bans to face G2, having to take away the Qiyana, Yassou, and Yumi from their opponents. Luckily, Fnatic could snatch the Akali and Sylas, in a pair of picks that would ultimately secure them the first game. A game that would start with a bang, as the teams wracked up seven kills in the initial four minutes, following a series of early fights.

As the game developed, each time a team made a play, it was immediately matched by their opponents. Slowly G2 edged ahead in kills, but Fnatic was able to grab a large amount of gold from structures, filtering this lead onto Martin “Rekkles” Larsson. Even with this lead, they couldn’t capitalize more than a small amount. The real turning point came at 20 minutes when Fnatic finally secured Baron. With this they could pick off G2 players with impunity, generating an insurmountable 9k gold lead, and defeating their opponents.

Both junglers desperately spent the early game getting their teammates ahead, forgoing farming and limiting their mid-game power. As the ten-minute mark came around, both teams relaxed into farming to catch up, and G2 was allowed to push down the top lane. Their advantage there had snowballed, Forcing Fnatic to play reactively to G2, in a slow loss to their opponents. During this dominant display, G2’s jungler Marcin “Jankos” Jankowski achieved a milestone 1000 career kills, in an apt metaphor for the team’s stellar performance in game two.

For game three, Fnatic shot back aggressively, drafting an aggressive early game comp. This culminated in an explosive play at eight minutes into the game, that saw Fnatic chasing down and killing G2 in the river.

From there G2 seemed unable to react. They failed to play the map, instead losing straight team fights, and missing out on crucial kills. They fell, learning how deadly Fnatic can be if they’re allowed to get ahead early.

As game four’s draft began, G2 looked to cripple the early game of Fnatic, taking away the crucial Sylas and Gragas picks. In-game, G2 used the power of their comp to push ahead early, neutralizing the early game power of Fnatic. But just like in game one, their gold lead was seemingly easy matched by a Fnatic team that’s well-practiced in playing from behind against G2. However, slowly, the raw champion power of G2 pushed them ahead, and they could catch and kill Fnatic whenever then needed. After a dramatic back and forth match, G2 had equalized, setting up a tense game five clash.

In this final match, G2 broke all conventions, employing a shock-and-awe draft that saw a Syndra bot, Renekton mid and Olaf jungle. Employing the early game aggressiveness of each of their lanes, G2 spurred ahead, grabbing kills in almost every part of the map.

Fnatic’s more conventional draft couldn’t hold up. Although they were always able to get kills back, G2 flew ahead in gold and structures. Their execution was flawless, as they grabbed picks left and right. By 16 minutes, the reigning champions were pushing inhibitor turrets. In a desperate final move, Fnatic engaged in a 5v5 fight, somehow emerging ahead afterward. But heartbreakingly for Fnatic, G2 pulled off a once in a lifetime 3v5 play, stopping the Nashor attempt, and re-affirming their dominance in the game. With their own Baron buff secured, G2 pushed into Fnatic’s base and looked to finish the game.

Fnatic continued to hold on, catching G2 occasionally, and even threatening a Baron take. But G2’s incredible lead forced Fnatic back into their base. The final, soul-crushing defeat came after a misjudgment at the Infernal Drake. Marcin “Jankos” Jankowski, was caught unaware by Bwipo, but as both teams collapsed, G2 came out ahead, winning the fight four to three, and subsequently sieging down a pair of inhibitor turrets. A few picks, and Baron taken shortly after, and G2 had secured their title.

With their win, G2 have secured their legacy. They’ll no longer have to face the gauntlet, obtaining the number one seed for LEC at Worlds 2019. This series was genuinely incredible. Each match a story, from the counter picks in game one, the top lane priority in game two, early game pressure in game three, and G2’s incredible performance in game’s four and five.

This was League of Legends played at the very highest level, with each game’s draft a delicate chess game, as teams deprived their opponents of their most essential pieces. And what’s more, both team’s amazing performances send a definitive message to international opponents: This is the standard of LEC League of Legends. If you can’t match it, you’re in for a bad time at Worlds 2019.