The Race to #1 G2 Faces in an Online Era 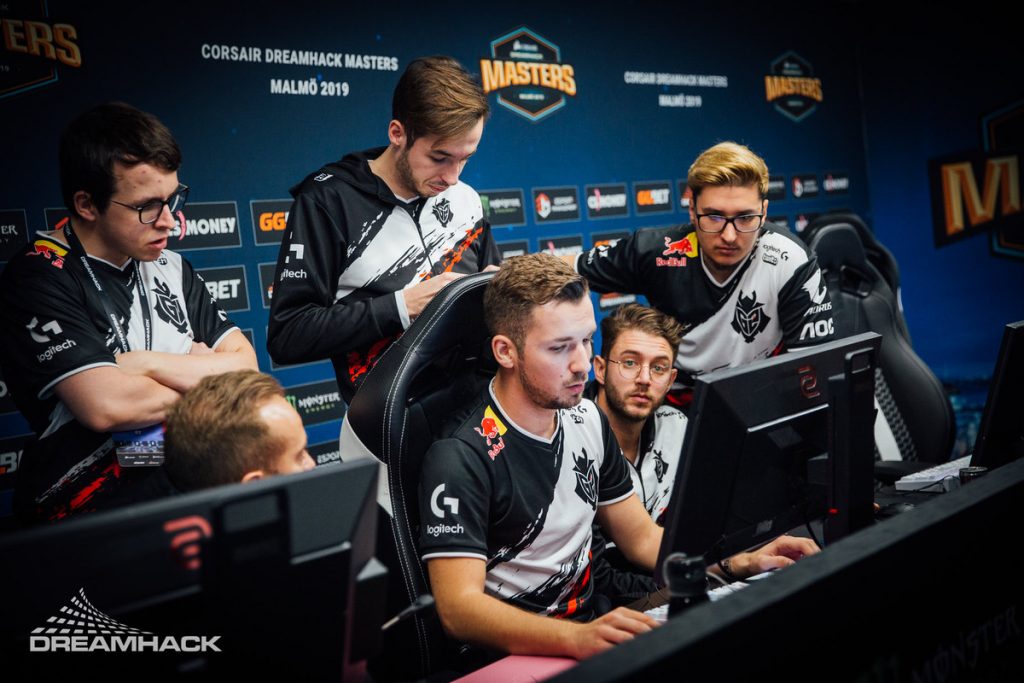 G2 have been ranked high in the last few weeks, but with no major titles this year. (Photo courtesy DreamHack)

G2 Esports sat atop the HLTV rankings as the best team in the world for two straight weeks. While the team finished top of their group at BLAST Premier Spring and won the Champions Cup Finals at the end of last year, this accolade comes without a single title won this year.

This has drawn criticism about whether G2 can truly be considered the number one team in the world based on consistency rather than peak performance in an unprecedented landscape lacking LAN pit stops to reconfirm the standings from many people in the scene. This includes analyst Chad “SPUNJ” Burchill on Twitter.

Not to discredit G2 and the new https://t.co/H2fqryK0ww rankings but there is no #1 team right now. Online era has shown no one is a front runner.

G2 Esports might be the number one team on paper but their position raises important questions about how the CS:GO scene defines a true best team in the world.

After losing long-term captain Richard “shox” Papillon last year, many questioned what the new-look G2 would look like with CR4ZY duo Nemanja “huNter-” Kovač and Nemanja “nexa” Isaković, with the latter taking on in-game leadership duty for the squad. This experiment saw G2 shift from a French to an English speaking lineup for the first time since its international roster back in 2015.

After initial hurdles were climbed, G2 themselves climbed the rankings and into the spotlight, with initial memes soon overshadowed by strong performances and a level of consistency that previous teams under the organization had lacked.

The rise of G2 has seen the team able to challenge top teams consistently and are certainly one of the best rosters around right now, but without any 2020 titles to their name, the spot feels open for the taking by a team like BIG that have won events and can perform online or any other top team contenders like FaZe Clan if they’re able to make a final push to claim a title.

Kings with no crowns

While this being the case based purely on consistency rather than big wins is rare in CS:GO, it isn’t unheard of in other sports. Tennis has seen five different female players claim the top spot in the ranking before without ever winning a Grand Slam title.

It would be equal to saying a team couldn’t be considered one of the best in the world without a Major or S-Tier event title which is a hot topic of discussion in itself. While the Champions Cup Finals isn’t the biggest event and only counts for 25% of the rank, G2 aren’t entirely crownless.

They have done it, @G2esports are your Champions Cup Champions! pic.twitter.com/dNLj4WUJgy

In events following IEM Katowice 2020, the final LAN before the global coronavirus pandemic saw the scene shift to online play, G2 finished second in ESL One Road to Rio and DreamHack Masters Spring Europe. In ESL Pro League Season 11 Europe, a three-way tie between FaZe, mousesports and G2 saw the latter eliminated in the group stage due to round difference.

The lack of even a single big title is a stark contrast to other teams that have occupied the top spot over the years. From Fnatic to Astralis to Team Liquid, even Evil Geniuses saw a standout team performance to win ESL One New York before taking the number one spot for two weeks at the end of 2019.

Right now, no other team looks reliable enough even with title wins for the likes of BIG and Complexity Gaming to challenge the top spot that G2’s own consistency has secured for now. The online era makes it difficult not only to judge any team’s true level but also increases the chance of more unlikely and unexpected winners compared to a full-length LAN tournament with the same teams attending.

Team Vitality continues to show glaring weaknesses despite jumping up to the second spot in the ranking. Superstar Mathieu “ZywOo” Herbaut has continued to put up huge numbers but the departure of Alex “ALEX” McMeekin saw the team draft the relatively unknown Kévin “misutaaa” Rabier. This along with Dan “apEX” Madesclaire taking the reins of the team saw Vitality initially struggle before solid performances in the ESL One Road to Rio and the BLAST Premier Spring 2020 European Showdown. Even with a mediocre finish at the main event, the online competition has allowed Vitality to sneak up the rankings.

Hard work always pays off 💪
Our CSGO squad is now the second best team in the world but they're not done yet 😉 pic.twitter.com/DXNUEuA7Ch

While many could look at a team like FaZe and assert they are stronger due to numerous third place finishes in recent months versus the ups and downs of Vitality, G2 still stands high above any of the current competition.

Previous number one spots have been occupied predominantly by those who were not just good but dominated competition and claimed significant titles. From the early days of Ninjas in Pyjamas to the formidable Fnatic, the raw talent of the Brazilians during their time on Luminosity Gaming and SK Gaming and most recently the Danish powerhouse of Astralis making history by winning a fourth Major for the organisation.

Astralis are soldiering on without esteemed in-game leader Lukas “gla1ve” Rossander and core member Andreas “Xyp9x” Højsleth. This paired with poor results has seen the team fall to outside of the top five for the first time in 812 days.

While Natus Vincere were the champions of IEM Katowice, their lack of online form has seen them bested even by the likes of Gambit Youngsters in CIS tournaments. This has seen their standing as the possible next dominant CS force stunted as they continue to struggle to adapt online.

G2 simply doesn’t have any reliable challengers within Europe right now for the top spot beyond a team like FaZe who lacks any titles or recent LAN playoff runs outside of BLAST to add points to their total.

Na’Vi have been competing in CIS circuits for the Road to Rio which has seen them separately from the rest of their European rivals. Teams in North America are also competing among themselves rather than against the rest of the world.

This regional split caused by the move to online play has not only impacted results and the quality of matches but has left many asking about how accurate a ranking can be when there are no LAN events allowing all of the top teams from across the world to face off against each other.

Team Liquid’s remarkable summer run in 2019 saw them usurp Astralis after winning IEM Sydney, DreamHack Masters Dallas, ESL Pro League Season 9, ESL One Cologne and IEM Chicago. Had this run of form happened during this ‘online era’ only against American competition, there would be no chance for Liquid to be number one nor would there be conversations suggesting they were.

The historic strength and recent standings of European teams means that while competition takes place separately across multiple continents, only a European team can really be considered the best team in the world currently even if the title is less illustrious than usual. Even then, any team claiming to be number one is still in a questionable position.

HLTV rankings are only in their fifth year but have documented the rise and fall of some of Counter-Strike’s greatest teams. Fnatic during their era collected three Major trophies, LG/SK had their two as well as housing Brazil’s best talent and Astralis’ climb to the top that felt endless are the most notable of these journeys.

Current G2 seems to pale in comparison to those teams. While talented and able to perform, struggling to close out three finals and memes surrounding the team make the accolade feel weaker even before considering the current state of the scene. Without an epic tale for the history books, G2 will seem out of place while at the top.

The rankings might say G2 are the best team in the world, and there might not be a team right now able to take that away from them, but there is still a lot of work and progress that needs to be made for the rankings to be seen as more than a fluke or a symptom of the ‘online era’ of CS:GO.

Until the return of LAN competition, the title of the number one team in the world is out of necessity rather than it necessarily being an accolade of merit. This isn’t to say G2 or any other team that may follow them isn’t the best team right now but simply that it is held in very different circumstances to previous title holders.