G2 and Na’Vi to Meet in IEM Katowice Grand Finals 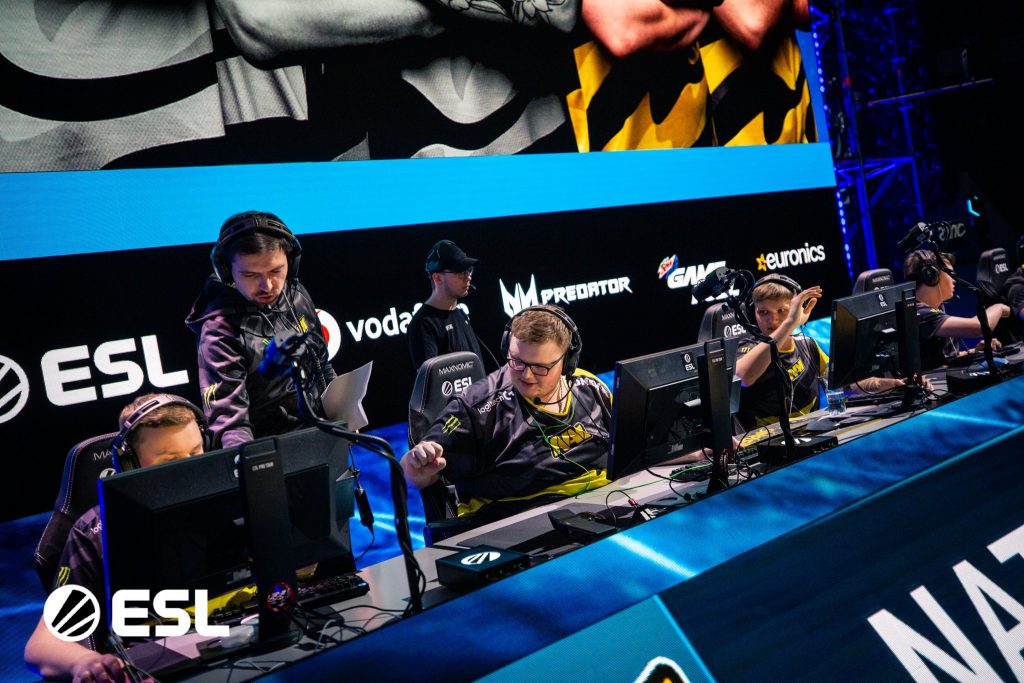 Na’Vi have slid passed the best team in the world on their rampage to the IEM Katowice finals. (Photo courtesy ESL)

The penultimate day of IEM Katowice has come to a close. Each semifinals match played out in a different way. G2 Esports have defeated Fnatic in a nail-biting three game series to earn a chance at the trophy. In the other match, Na’Vi have wiped the floor with Astralis to book their ticket to the IEM Grand Finals.

The first map of the IEM semifinals was Fnatic’s pick of Inferno. Although Maikil “Golden” Selim got the pistol ace, G2 defused the bomb in time to take the round. The A bombsite was the early focus as both teams traded rounds. G2 took the lead off of a 3K by Kenny “kennyS” Schrub which broke the Fnatic economy.

The G2 defense indexed heavily into Mid control, shutting down Fnatic’s T side for a 10-5 lead at the half.

Fnatic took the second pistol round with a last second defuse, but then G2 ran them over in Mid with a force buy to steal the momentum. G2 earned a 13-6 lead before Fnatic’s next gun round. Two consecutive A site attacks ended with an Audric “JaCkz” Jug 4K to put G2 on match point.

Fnatic did start a comeback with six rounds in a row, but G2 closed the map out 16-12 with a B rush.

G2 took the early lead on Dust2 with a pistol win and two fast B rushes. Fnatic’s defense stabilized at Long A, helping them take a 6-5 lead. The G2 attack then swapped to a B focused plan, but Fnatic frequently shut that down as well. The half ended with the Swedes up 9-6.

The second pistol round went in G2’s favor as they pulled the score within one. Fnatic kept their lead with slow T rounds that denied G2’s Mid pressure. Both teams found success with varying strategies, but Fnatic always stayed a step ahead of their opposition. After earning map point, Ludvig “Brollan” Brolin closed it out with a 4K clutch on the B bombsite. The 16-11 Fnatic win sent the match to a tiebreaker.

The final map would be Train. G2 once again took the pistol round, gaining a 3-0 lead. Fnatic’s gun rounds found success on the A bombsite. When they tried to hit the B site, Nemanja “huNter-“ Kovač and Nemanja “nexa” Isaković held it down flawlessly. Fnatic returned to the A site and won the last three rounds of the half, making the score 6-9.

G2 won their fourth pistol round in a row, extending their lead to six. Fnatic’s defense came out on top in the A site to close the gap. G2 then rushed B countless times to earn the 15-8 match point. Fnatic were still not ready to die as they pulled back four in a row. In round 28, Fnatic was looking to retake the B site and defuse the bomb. HuNter– denied it just in time to steal the round and end the series with a 16-12 win.

Na’Vi picked Dust2 to start the second IEM semifinal matchup. They earned a 3-0 lead on the T side before Astralis took the first gun round. With economies on the line in round four, Oleksandr “s1mple” Kostyliev started to heat up with a 3K.

From there, Na’Vi unleashed their full power against Astralis. Every single round left in the half went the way of Na’Vi. All of their players were on point, hitting their entries without fail. Leading them was s1mple who amassed a 25-11 KDA, 123.5 ADR, and a 2.09 HLTV rating. A 14-1 score line was the result.

Na’Vi even took the second pistol round to earn match point. Astralis stalled for four rounds before Denis “electronic” Sharipov ended the game with a Catwalk hold. Dust2 went to Na’Vi 16-5.

Astralis chose their iconic Nuke to try and push the series further. While they did barely win the pistol round, Na’Vi’s CT force buy stole the second round. The first Astralis full buy was erased immediately as Egor “flamie” Vasilev gunned down all five members in Ramp.

Na’Vi’s dominance continued on Nuke, every duel going in their favor. Astralis were utterly embarrassed as Na’Vi took a 13-2 half time lead.

Astralis won the first three rounds, but then gave up a save round as Na’Vi slowly played the B bombsite. Two rounds later, Na’Vi completed the 2-0 thrashing of the world’s best team by taking Nuke 16-5.

The stage is set for the IEM Katowice Grand Finals. On one side is G2, a team who has hit their stride, as of late. Their storied players like kennyS have turned back the clock, while their younger players like nexa have come into their own. On the other side is Na’Vi, a squad who have finally found consistency. Led by the best player in the world, s1mple, the rest of the team has raised their level to match him. This matchup will ignite the (empty) Spodek at 7:00 a.m. PST, you won’t want to miss it.