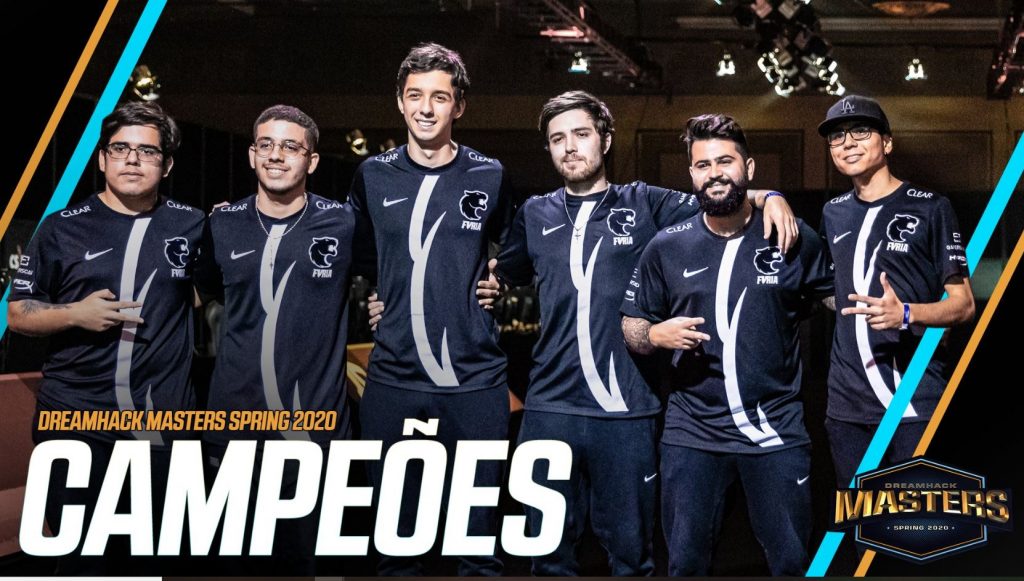 FURIA have claimed their rightful throne atop NA with their win at DreamHack Masters. (Photo courtesy FURIA)

The North American side of DreamHack Masters Spring has concluded. FURIA has exerted their dominance as the region’s best team after a clean 3-0 sweep of Team Liquid in the Finals. This result mirrors that of the Group Stage, where FURIA went undefeated in a group with Liquid.

FURIA’s first stop was the Upper Bracket Finals against 100 Thieves. The Thieves came out swinging on Inferno, shutting down FURIA’s T side with ease. The 11-4 lead was converted into a perfect T side, bringing 100 Thieves across the line with a 16-4 domination of FURIA’s map.

However, FURIA would fire back on Vertigo. The Brazilians put up an 11-4 defensive half of their own thanks to a double AWP setup from Andrei “arT” Piovezan and Henrique “HEN1” Teles.

While their T side wasn’t as flawless as 100 Thieves’ from last map, it was still enough to bring home the victory. FURIA secured map two 16-11, forcing a tiebreaker.

Train was a much closer affair. FURIA started out on T side and made great headway towards 16. In terms of clutch situations, FURIA were undefeated at four to zero, giving them many crucial rounds. Vinicius “VINI” Figueiredo earned two just on the attack.

100 Thieves did keep things competitive in the second half. Neither team could win more than three rounds in a row as the scores kept climbing higher. In the end, it was FURIA who broke the 14-14 tie with two in a row to secure the series victory and a spot in Finals.

The four team Lower Bracket kicked off with Team Liquid vs Gen.G Esports. The expected favorites in Liquid wanted to make this a quick one. Gen.G’s Mirage pick quickly spiraled out of hand, as they failed to crack Liquid’s defense. A highlight filled half for Liquid’s individuals resulted in a 12-3 score line. After a short second half, Liquid took Mirage 16-6.

Dust2 was at least a competitive map. Gen.G’s CT side held on for a small 8-7 lead at the half. When the teams swapped, Liquid was a single step ahead of Gen.G. Jonathan “ELiGE” Jablonowski had an amazing game, dropping 31 frags and 118.0 ADR on his road to match MVP.

Opposite of them, Cloud9 continued their upward trajectory against MiBR. The North American squad showed great planning and execution, comfortably 2-0’ing the Brazilian roster. The 16-11 and 16-10 results put C9 through to the next round.

Their train would come to a screeching halt up against Liquid. Much like Liquid’s stomping of Gen.G’s map pickp, Cloud9 had even less success on their Overpass. Liquid’s defensive wall stood strong, starting off 12-3 once again. The second half was even shorter this time, with Liquid closing out a 16-4 routing. Liquid’s Nuke pick took longer, but featured the same end result. They earned eight rounds on T side then held for eight on CT. Cloud9 had glimmers of hope, but couldn’t keep pace. A 16-12 result put Liquid through to face 100 Thieves.

In the battle for the privilege of facing FURIA in Finals, the teams started out on 100 Thieves’ pick of Vertigo. The NA giants went toe to toe for thirty rounds. After plenty of both hilarity and excitement, overtime ensued. After going down 2-1, ELiGE once again put Liquid on his back and carried them to the 19-17 win.

With a monstrous 42-20 K/D ratio and 113.5 ADR, ELiGE was the only Liquid member with an HLTV rating above 1.00 on Vertigo. Nonetheless, the carry was good enough to get Liquid map one.

Taking C9’s Overpass pick for themselves, Liquid made map two much more convincing. 100T looked unprepared for the map, allowing Liquid to take an 11-4 lead from T side. Another quick second half saw the North American squad end the match with a convincing 16-5. With this win, Liquid had run through the entire Lower Bracket on the way to Finals.

Looking to avoid a crushing Finals loss like G2 had earlier in the day, FURIA came into Finals prepared. In addition to their one map lead, FURIA also got Vertigo as the second map and Inferno as a potential fifth. However, the match would not go that far. Liquid’s Mirage pick started off rough. FURIA’s CT side held them to just one round in the first eleven. The 10-1 deficit mirrored BIG’s from game five of EU Finals. However, their CT comeback would not be up to par. After bringing the map back to even in the second half, FURIA truly took off. The 11-11 score quickly shifted into a 16-12 result for the Brazilians.

Now on two maps to none, FURIA had their home field of Vertigo waiting. Despite starting on T side, FURIA racked up the rounds. A dominant 12-3 half all but confirmed the result. Liquid did take the second pistol round, but FURIA quickly quelled any talk of a comeback.

FURIA closed out the map 16-5, taking the best-of-five Final in just two maps played. It was truly a full team effort, with all members earning almost 30 kills, 70 ADR, and a 1.00 rating.

FURIA have become the new picture of consistency in the North American region. Third at ESL Pro League S11, top two at BLAST Spring Showdown, and now first at DreamHack Masters Spring all in the past two months. While they might not be outright considered the best team in the region, they certainly have a very strong case. If they top the field at the upcoming BLAST Spring Finals, the consensus may become universal.