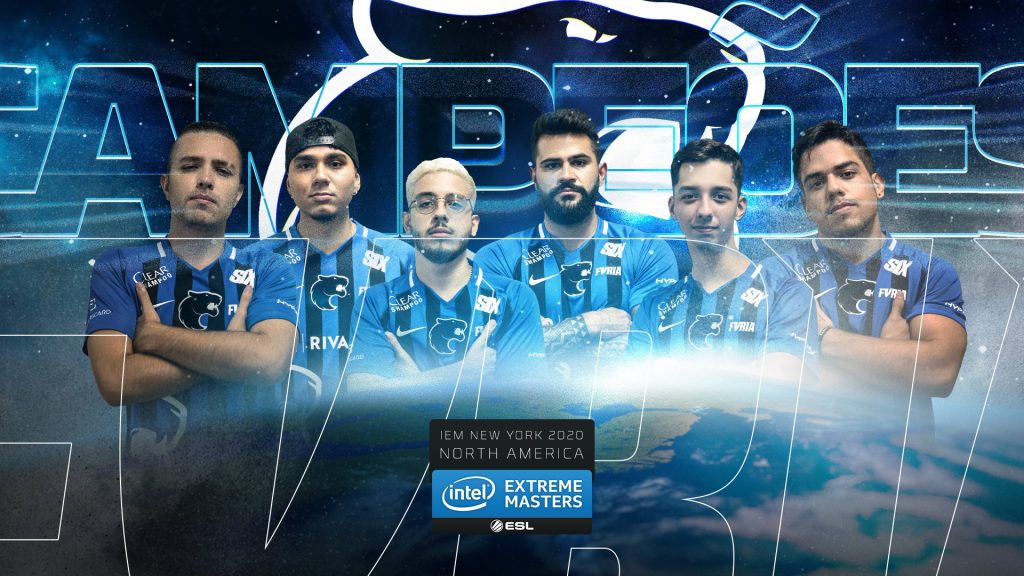 FURIA have taken their second straight tournament win after a 3-1 victory over 100 Thieves in the finals. (Photo courtesy FURIA)

North America’s final RMR event of the year, IEM New York Online, has come to a conclusion. Six teams entered the playoffs hoping to raise their standing in the running for the next eventual Major. In the end, FURIA has won their second straight tournament after a 3-1 victory against 100 Thieves in the grand finals.

FURIA’s playoff run started in the quarterfinals thanks to their third seed finish in the group stage. Their first opponents were Team Liquid. Since it was a single elimination bracket, the loser would be limited to 1875 RMR points at most.

Inferno was up first courtesy of FURIA. The score remained even throughout as both teams fought for control of the match. Overtime would be required for the first map of playoffs. After two extra periods, it was Liquid who found the edge. Keith “NAF” Markovic led the way for Liquid to take a 22-19 victory thanks to his 41 kills and 105.7 ADR.

The second map of Mirage would also need an overtime after each team put together very solid 10-5 CT halves. Interestingly, the only member of FURIA having a game to write home about was Henrique “HEN1” Teles. His 42 kills were 16 more than his next closest teammate. Even so, FURIA powered through and took a 19-16 win to force a third map.

Vertigo was much more of a team effort from the Brazilians. Every single player earned an HLTV rating of above 1.0 as their T side took hold of the game. A 9-6 half time lead helped FURIA to stay a step ahead of the North Americans. Liquid got close to forcing yet another overtime, but FURIA’s defense held on long enough to close out the game. A 16-13 result sent FURIA through to the semifinals.

Next up was Evil Geniuses. The two squads met in the group stage in what was an easy 2-0 sweep for FURIA. The last three meetings between them all ended the same way, and this match would be no different.

FURIA’s signature Nuke pick was up first. This map was played in all four of their past matchups with EG never finding more than 12 rounds. This time, they only managed to get four. FURIA’s T side was as lethal as ever, rolling through the EG defense. A 12-3 half soon turned into a 16-4 finish as FURIA took map one in the blink of an eye.

Train was EG’s new answer to the FURIA problem. Their T side actually started off well, earning a 4-1 lead. However, FURIA responded in kind with an aggressive defense plan. FURIA pulled the score back to 9-6 at the half. Their run featured one of the best aces in recent CS:GO history by Yuri “yuurih” Santos, containing amazing trigger discipline, target switching, and spray control.

EG won the second pistol round as well. The momentum allowed them to reclaim the lead at 12-10. Unfortunately for them, FURIA’s T side was better than anticipated. The Brazilian squad took six of the last seven rounds to secure the 16-13 win and a spot in the grand finals.

IEM New York came to a head with FURIA taking on 100 Thieves. The Thieves placed first in their group and looked strong in their semifinal victory. They were hoping to take home their first and only tournament victory in their last game under the 100 Thieves banner.

The Thieves did their homework as well. FURIA predictably picked Nuke for their first map. 100T responded by completely shutting down the usually explosive FURIA T side. After losing the pistol round, 100 Thieves took the next 13 in a row to go up 13-2 at the half. FURIA’s defense was decent, but not nearly planned enough to hold the Thieves down. Sean “Gratisfaction” Kaiwai earned a 34-12 K-D with 114.4 ADR and a 1.98 rating. A 16-9 finish gave hope for 100T to win the series.

They would need to continue their winning ways on Inferno. This map was incredibly close, being tied on six separate occasions. 100 Thieves started out on the T side. After losing the pistol round, they battled back to win seven of eight rounds in a row, taking a narrow 8-7 lead at the half. Momentum continued to swing back and forth as the map made its way to 14-14. In the end, it was Vinicius “VINI” Figueiredo who carried FURIA across the finish line. The 16-14 win put the Brazilian side on the board.

With the series tied, the teams went to Vertigo. FURIA’s second map looked much better for them. Their usual T side prowess returned as they took a dominant 11-4 half. FURIA flourished as a team with every player earning an HLTV rating of over 1.20. The Thieves had no response on defense and couldn’t find an avenue on offense either. FURIA took a quick 16-4 third map, putting them on championship point.

Mirage would be the Thieves’ final resting place. They started out on offense and continued to struggle. 100T’s 12 total T rounds in the series slightly increased to 16 total over the last of the four maps. FURIA’s defense was once again too strong across the board with no weak links to be found. An 11-4 half for FURIA put them in prime position to close out the tournament. They would do just that on their T side.

It's a 13-8 lead for @Furia and they look good to close out the series on Mirage! 😱 #IEM pic.twitter.com/k4C9UiJOqN

After a 16-11 finish, FURIA were crowned champions of IEM New York.

FURIA are once again on top of North America as the undisputed best team. Their two consecutive event wins at ESL Pro League S12 and now IEM New York marks their fourth total trophy of the online era. They have also climbed to rank three on the worldwide rankings. FURIA’s international appearance at BLAST Premier Fall later this month will be greatly anticipated.

As for 100 Thieves, this loss marks a melancholic end to their time not only under their organization, but as a team. Their five man roster had been together since September of 2018. While Justin “jks” Savage and Joakim “jkaem” Myrbostad have already found separate teams, the rest of the players’ fates remain unknown.