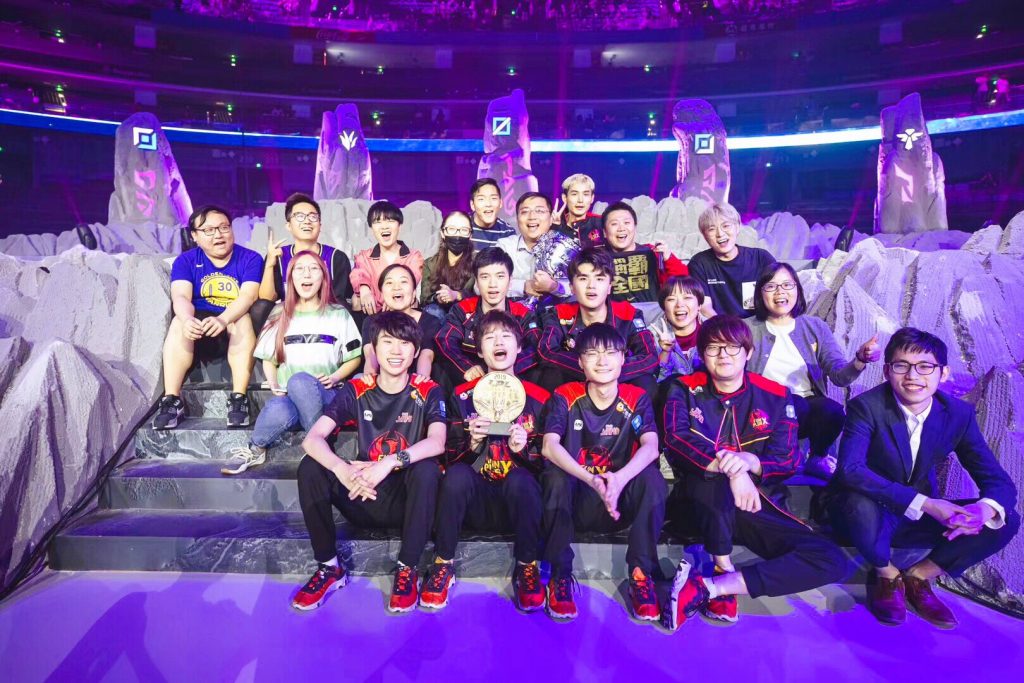 Risen from the ashes of their Spring Playoff failure, FunPlus Phoenix redeemed themselves with a 3-1 win over Royal Never Give Up to win the 2019 LoL Pro League (LPL) Summer Championship. FPX locked in China’s first seed at the 2019 World Championship, while RNG will represent the LPL as the second seed.

The experience of playing and winning big time matches looked like it served Royal Never Give Up well in the opener. Jian “Uzi” Zi-Hao and Shi “Ming” Sen-Ming combined to pick up First Blood at level 1 bot lane and the surprising lane swap by Xie “Langx” Zhen-Ying and Li “Xiaohu” Yuan-Hao paid early dividends for RNG.

Meanwhile, FunPlus Phoenix looked like the moment was too big for them. In addition to losing First Blood in a straight 2v2 that Liu “Crisp” Qing-Song engaged bot lane, Kim “Doinb” Tae-sang inexplicably died to Raptors while FPX were trying to pick off Hung “Karsa” Hao-Hsuan in their jungle.

FPX eventually calmed down and turned around and picked up a nice double kill on an overextension by RNG’s bot lane, but RNG never relinquished their early lead. They controlled the drakes, using double mountain to pick up the first Baron and closing it out with a double infernal Elder Drake.

FunPlus Phoenix bounced back in game two in a big way. Royal Never Give Up made the first move by sending Karsa to gank bot, but FPX responded with a teleport from Doinb to turn around the play and get the early 2-for-1 trade. FPX then won a 4-for-1 fight after picking up the first drake of the game to take a 1.5k gold lead only 13 minutes in.

Crisp found a flank on RNG’s mid turret push at 20 minutes to start a fight that FPX would win 4 kills to 0. FPX took an uncontested Baron and ran away with the game from there, finishing with a 16 kills to 3 win in 28 mins. First team All-Pro Lin “Lwx” Wei-Xiang got the game two MVP with a 10/1/6 score on Kai’Sa

Things got interesting in champion select in game three as Royal Never Give Up locked in Quinn for Uzi. Because Quinn itemizes straight into lifesteal and is by no means a hyper carry, it allowed Karsa the rare opportunity to focus on top lane. He did that early, diving Kim “GimGoon” Han-saem’s Gangplank four times before 20 minutes.

But while this was happening, FunPlus Phoenix slowly stacked drakes and built CS leads in their other lanes, notably giving Lwx’s Kai’Sa a large lead over Uzi. Gangplank loves items, but he’s also still very effective when denied gold because of his global ultimate and the extra gold he earns from his Q – Parrrley.

So even though RNG got the kills they were after, they were never able to transition that to a big enough gold or turret advantage to offset the scaling of FPX. The game was only 4 kills to 2 in RNG’s favor at 35 minutes when the teams fought over Elder Drake. Karsa secured it for RNG, but RNG had no elemental drakes to buff it up and FPX won the ensuing team fight 3 kills to 0.

FPX tried to use that team fight win to push for the win, but were stopped just short of killing the Nexus as RNG spawned. RNG then tried the same, knowing they were past the point in the game they could legitimately win team fights. Crisp’s Alistar bought enough time for the rest of FPX to respawn, and FPX thwarted RNG’s push and returned to finish the Nexus they had already gotten so low.

GimGoon was named game three MVP for withstanding all the early pressure to still deal the most damage in the game — 16k — while evening his score at 5/5/1.

Game four was fought pretty evenly up until 30 minutes. Crisp found a three-man knock-up on an over eager Royal Never Give Up team and FunPlus Phoenix picked up a 3 kills for 1 fight, leading to an uncontested Baron. That snowballed to a free infernal drake, turrets, and the first real gold lead of the game on either side.

With that gold lead in hand, FPX were able to secure the next Baron and first Elder Drake spawn without issue. They cracked RNG’s top inhibitor and were looking for mid when RNG made their last stand.

Karsa jumped in and Xiaohu followed up with a massive Neeko ultimate, but Lwx’s Lucian dashed his way around the team fight to pick up a quadra kill for the ace. FPX pushed down the final Nexus up 14 kills to 10 in 42 minutes to secure their first LPL title. Crisp was recognized as game four MVP for his excellent engages on Nautilus.

DOINB, FPX GET A TITLE

The best team in the LPL throughout 2019 were finally rewarded with their first title. FunPlus Phoenix finished in first place in both the Spring and Summer Seasons, finishing 13-2 and 14-1. Even more impressively, their 29-4 game record (88%) was the third best winning percentage in a single season in LPL history.

Star mid laner Doinb got his MVP in the Spring, but had never been able to break through with his team on the biggest stage. He will now always be remembered as a champion — and one who did it his way. Even with the intense pressure of the series, Doinb didn’t shy away from his flashy picks, playing Yasuo, Ryze, and Qiyana in the win.

With their domestic demons finally conquered, FPX look to take on the world as one of the favorites at the 2019 World Championship.

Invictus Gaming and Top Esports will face off Sunday, September 8 in a best-of-five series. Will the reigning World Champions get to defend their title, or will the LPL MVP Zhuo “Knight9” Ding make his debut on the World stage?