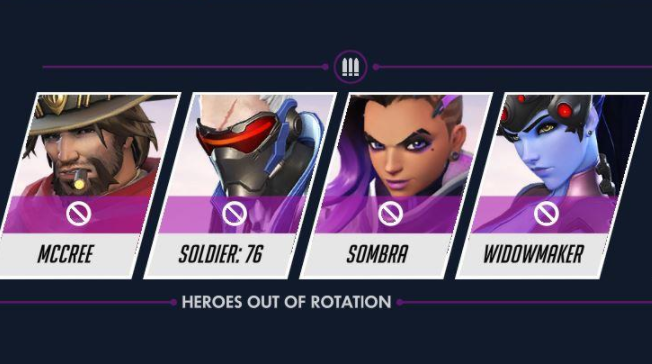 Starting from the beginning of Competitive Season 21, Overwatch has instituted Hero Pools, a system designed to shake up the meta on a regular basis. Each Thursday, the development team will select four heroes to remove from play for the next week. For players, strategies and hero picks must adjust as they respond to the absence of certain heroes. Every week, Hotspawn will be examining the Hero Pool with an eye on how it will affect your ranked games.

After complaints about two supports and tanks being banned in previous Hero Pools, Blizzard has swung hard in the opposite direction this week. Four DPS heroes are banned; McCree, Soldier: 76. Sombra, and Widowmaker. Losing that many heroes should have a massive impact on DPS players and what they pick for the next week.

They’re joined this week by Baptiste and D.Va for a total of six heroes removed from Competitive play. That’s by far the most that have been taken out at once yet.

ngl this is hella depressing, even tho i think i have good heroes outside my hitscan, but I love playing hitscan and it just guts me to see so many of them banned :/

This set of heroes definitely seems to lean into the experimental nature of Hero Pools that Jeff Kaplan talked about in his original Developer Update on the topic. The feature is designed to keep the meta from stagnating and removing this many heroes should definitely accomplish that.

The first thing that jumps off the page about this Hero Pool is the targeted bans against hitscan heroes. All four DPS picks, as well as Baptiste, fit that description. McCree, Soldier: 76, and Widowmaker being included together seems especially impactful. That leaves Ashe as the only damage hero with any sort of ranged hitscan weapon. She’s long been a pretty underwhelming hero, but she might be thrust into the limelight now.

The other option is that players simply ignore the hitscan role entirely. Hanzo can serve as an adequate replacement for both McCree and Widowmaker, playing the middle ground between long and mid-range damage.

The biggest beneficiary of this Hero Pool has to be Pharah. She just saw most of her direct counters taken out of the game next week so she should have something close to free reign. Expect to see a lot more of her in ranked next week. If she becomes too oppressive without Widowmaker or McCree around, Ashe might become a must pick when Pharah is in play.

As far as impacting the overall meta, the most impactful single ban here is probably D.Va. She’s been such a staple pick for a while now that it’ll be fascinating to see how players cope. It should mean a lot of Rein-Zarya tank duos as players go back to old comfort picks. Rush comps with Lucio and Reaper alongside those two should be very effective with less ranged poke damage in the game.

The other option is really to go for double shield compositions of some configuration, most likely Rein/Orisa. Those are generally easy to execute, and work well with heroes like Hanzo and Mei that should be pretty powerful this week.

Overall, this week’s Hero Pool signals the dev team’s commitment to the feature in general and their willingness to make drastic changes week to week. There’s no doubt that this pool will alter how Overwatch works on a core level, and it’s exciting to see exactly how that plays out.