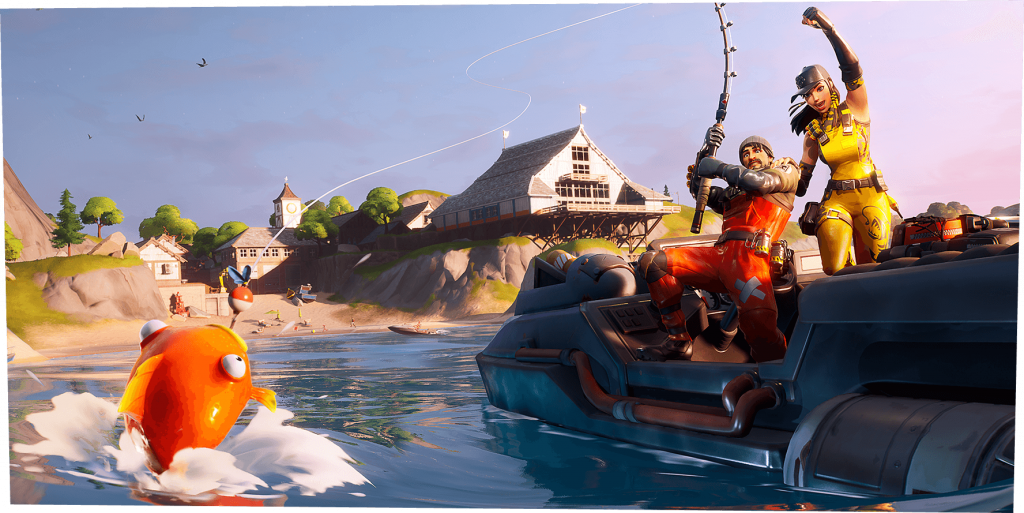 Fortnite's Chapter 2 has many new features, including fishing. (Image via Epic Games)

The Fortnite Season 10 grand finale changed the game completely when the entire map was literally sucked into a black hole.

For the next 36 hours, Fortnite was unplayable on any platform, all social media channels went dark, and all players were greeted with a repeating screen of a black hole when logging into the game. After what felt like an eternity to the player base, Fortnite Chapter 2 launched on October 15 and introduced a wide variety of changes to gameplay, features, and user-interface.

The biggest change is the introduction of a new map for players to explore that includes brand new points of interest and old fan-favorite locations.

Pleasant Park and Retail Row make a much-welcomed return to the map while new locations such as Dirty Docks and Craggy Cliffs have peaked players’ interest to explore.

Another notable change to the map is that it is not fully revealed to the player and must be physically explored in order to show on the in-game map. This is a smart move by Epic Games to promote exploration and new drop zones in order to fully flesh out the playable zone.

Various objects can also be interacted with now, such as haystacks and dumpsters, which players can hide in to ambush the enemy.

Drop into a New World 🌎

The new map features several rivers and lakes that introduce new mechanics such as fishing and swimming.

Using a fishing rod allows players to catch various fish that increase health and shield levels, and there is also a slight chance of fishing out actual weapons.

Swimming allows players to traverse the map in a new way. Depending on if they are traveling up or downstream, their swimming speed will be affected.

There are also new drivable boats with mounted weapons that add variety to gunfights and provide transportation when outrunning the storm.

There is a brand-new weapon called the Bandage Bazooka that allows players to fire bandages at teammates to heal from a distance, and there is also an option to carry downed teammates to safety.

Players are also able to carry downed enemies to prevent them from being revived.

Weapons can now be upgraded at weapon upgrade stations scattered throughout the map by using gathered materials. Being stuck with grey and green weapon variants will be less of an issue in late game now thanks to this new mechanic that helps even the playing field.

Loot chests received an update in the form of a new variant, the ultra-rare blue chest. This new loot box appears less frequently than its gold counterpart and drops rarer items.

Fortnite Chapter 2 also introduced a graphics overhaul with new animations and updated graphics to give the game a fresh feel.

Various user-interface updates provide a more streamlined gaming experience, such as the ability to ready up for a new match without having to return to the game menu.

The new map, mechanics, and gameplay changes provide the Fortnite player base a new world to sink their teeth into, and an updated meta in both casual and competitive gameplay.