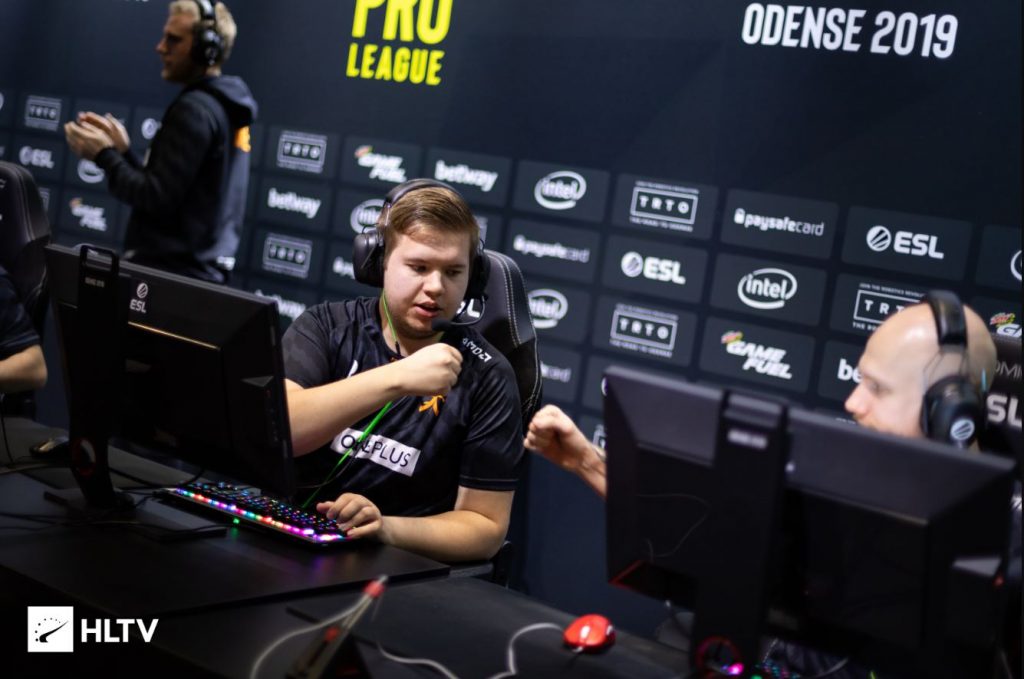 Fnatic have beaten mousesports in a rematch of the Season 10 Grand Finals. (Photo courtesy HLTV)

The European side of ESL Pro League Season 11 has come to a conclusion. After the second group stage, mousesports and Astralis qualified for a semifinals appearance while Fnatic sat in grand finals as the last boss. The short two match playoff bracket was an intense one, as every possible game was played.

Mousesports Attempt to Defend their Title

Mousesports came into playoffs after barely qualifying in third seed thanks to a tiebreaker over Natus Vincere. Their performance to end the group against Astralis didn’t inspire any confidence as they were quickly 2-0’d while only taking four total rounds. With only one day off to prepare, mousesports were tasked with turning that result on its head if they wanted to have a chance to be two-time defending ESL Pro League champions.

The map veto went identically with both teams taking the same map as in their first matchup. Nuke was again left over as the tiebreaker map if needed. Right away, the tempo of the match looked similar. Astralis’ Dust2 T side got off to a hot start and mousesports struggled to put up a good fight. They at least put up five rounds in a half this time, but they had their work cut out for them.

After winning the second pistol round, Karrigan single handedly got the momentum going for mousesports with a quadra-kill on the A bombsite attack.

Now they had some legs to stand on in this comeback. Two massive five round streaks by mousesports helped them send their own map pick to overtime. It took all six rounds, but mousesports cleaned up Dust2 19-17. Not bad for a team that got 16-1’d on it just two days prior.

The Astralis Inferno pick went as expected. Mousesports only put up five rounds total in the loss, likely since they didn’t put much preparation into it. The real test would be the final map of Nuke. Mousesports managed an above average six T side rounds before stonewalling Astralis out on the defense to earn a 16-12 win and a spot in grand finals.

Fnatic Return to the Top

The much-anticipated best-of-five matchup between Fnatic and mousesports started off with a unique sight in map veto. Mousesports banned Inferno instead of their usual permaban in Overpass. Fnatic responded with the Overpass pick while mousesports took Dust2 after their Train was banned. Both of the first two maps went to their respective owners in relatively comfortable fashion. At a score of 1-1, the real series began.

Fnatic’s second map was Vertigo, an interesting choice since neither them nor mousesports play it often. The logic was likely that Fnatic would rather play it early in the series than later. Both team’s relative discomfort on the map was apparent. Dry peeks and aim duels took the spotlight instead of the usual Vertigo utility and wall bang wars. In the end, mousesports were more clutch. They took map two 16-11 going into their next map in Nuke.

The problem with Fnatic picking Vertigo so early was now apparent. Mousesports had championship point on their second most played map in the past three months. On the other side, Fnatic have played Nuke about the same amount of times as Vertigo in the same span. However, Fnatic took down mousesports on the map during their Stage 2 clash. They would need to do it again if they wanted to take the series to map five.

Fnatic did one more than just beat mousesports; they wiped the floor with them. Fnatic had the luxury of starting on the CT side. No matter where mousesports tried to attack, Fnatic were there stopping them. Mousesports only found a single round on their whole T side, essentially dooming them to the map loss. It only took two T rounds for Fnatic to close out Nuke.

The final map was Mirage. Here is where the payoff of early Vertigo came in for Fnatic. Mirage is their second most played map in the past three months, while it’s in the bottom half of maps for mousesports. Fnatic started out on CT side, but they got behind early. Mousesports held a 5-2 lead and were looking to run away with the game. However, Fnatic were able to stabilize and salvage an 8-7 half.

The game was incredibly close through round 22, then Fnatic started to pull ahead. Three rounds in a row got them to match point, then JW closed out the match with a bang.

Fnatic’s five map marathon win marks their third ESL Pro League title, and their first since 2015. They have also avenged their loss to mousesports in the Season 10 finals and will likely rise past them on the global rankings. While this season of ESL Pro League will have the online asterisk next to it, Fnatic are completely deserving of praise after having beaten top team after top team. Fnatic will look to continue their rise at DreamHack Masters Spring in late May.