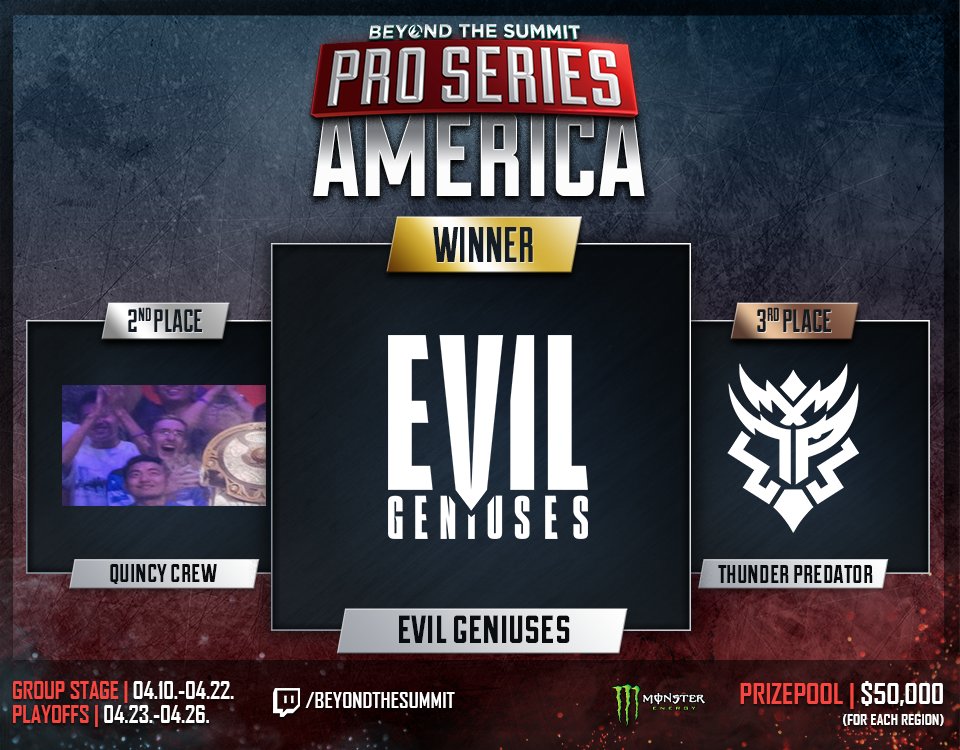 Evil Geniuses adapt to the meta just in time to outpace Quincy Crew & Thunder Predator on finals day at the BTS Pro Series. (Photo courtesy Beyond the Summit)

After 12 straight days of group stage play, the Beyond the Summit Pro Series came to a conclusion over just three days of fast paced action. Both the South East Asian and American regions showcased a uptempo meta that rewarded heavy aggression and lane winning drafts. Though there were a few differences in hero preference between the regions, the general consensus on the meta seems to be quite clear at the highest levels of Dota.

Fnatic came into the bracket as the clear favorite from the group stage. In their opening series against BOOM Esports, they stumbled a bit out of the gate in game one before crushing the Indonesian squad in games two and three. It appears as though that first loss cemented Fnatic’s conceptual grasp on the meta as they avoided picking anything remotely resembling their first draft for the rest of the tournament.

Fnatic would move on to face TNC Predator who made short work of Team Adroit on their side of the upper bracket. TNC has struggled mightily since winning the first DPC Major of the season but they looked strong against Adroit, utilizing wild aggression and heavy tower push to utterly stomp their Filipino rivals.

Absolutely savage from 23savage. Game 1 of @Fnatic vs. @TNCPredator is fast and furious! #Dota2 #btsproseries

Fnatic’s clean sweep of the upper bracket finals and grand finals proves they are several steps ahead of everyone else in the region. Showcased a few different strategies including five-man hyper aggression four protect one. 23savage looks to be coming into his own as a true tier 1 carry player, able to adapt off of his main comfort heroes like Morphling and into whatever role the team needs from him.

TNC versus Fnatic in the upper bracket finals looked exciting on paper, rematching two regional rivals who have traded the number one seed in SEA for the past few years. In practice, however, the series wasn’t all that close and Fnatic took game one by out fighting TNC’s Alchemist before running them over in game two with the same hero. In the lower bracket, BOOM Esports rebounded from their upper bracket loss to eliminate Reality Rift while Geek Fam out dueled Adroit 2-1. Geek Fam would then 2-0 BOOM in decisive fashion to lock horns with TNC in the lower bracket finals.

Despite the best efforts of Raven and Kuku to upset their former team, TNC took the series 2-0 with relative ease. The third place finish in such a tough region showed a lot of growth from a Geek Fam team that started the season failing to qualify for any DPC Majors. If they can continue to develop, the SEA picture should get increasingly interesting as the year goes on.

It was a crazy series with some huge back-and-forth teamfights but @TNCPredator finish it 2-0! Here's some highlights of this epic showdown while you wait for Grand Finals. #Dota2 #BTSProSeries

The South East Asian finals featured a rematch of the winner’s bracket with Fnatic and TNC once again clashing. For TNC, the story would be just another sad song however as Fnatic demonstrated complete understanding of how to play Dota on Patch 7.26a. Game two of the three game sweep was definitely the most interesting, featuring a carry Silencer for TNC against the Fnatic Phantom Assassin. TNC actually lead for most of the game before a disastrous fight around Roshan allowed Fnatic to regain map control for the first time all game. 23savage went absolutely bananas on Phantom Assassin, putting in a 15/0/9 stat line on a hero we rarely see in competitive Dota 2. Game one and three of the grand finals were about as one sided as it gets with Fnatic sporting a 39-9 kill advantage and ending both in under 30 minutes. After the games were over, Fnatic’s offlaner iceiceice gave TNC credit for playing well with a severe ping disadvantage in the matches.

Interview with @FNATIC @iceiceicedota – "Humans are great, we adjust". Congratulations on the win! #Dota2 #BTSProSeries

Normally in a North American tournament the storyline is something along the lines of “who will challenge Evil Geniuses?” With the star-studded roster missing two key members, the playoff picture appeared much closer than usual. Quincy Crew, formerly CHAOS, earned the top seed coming out of groups and faced off against Business Associates, formerly J.Storm, in round one. In contrast to the SEA region, the pace of play in North America appeared to be glacial as game one of the series became an 80+ minute slugfest. Game two and three were one-sided affairs that stretched to almost 40 minutes but featured more up-tempo play. After their 2-1 victory, Quincy Crew advanced to face Evil Geniuses whose patchwork roster overcame CR4ZY 2-1 in their series.

The lower bracket featured a much different take on the meta than the slower paced upper bracket. The lone South American representative, Thunder Predator, demolished Business Associates in two short games. The well known aggressive playstyle of South American pros seized an early lead in both contests and out fought their North American opponents from there. In the other lower bracket match, CR4ZY squared off against Cloud9 in a battle of former teammates. The spicy drama barely had time to develop, however, as each game ended in under 30 minutes. CR4ZY took games one and three to win the series and advance to face Thunder Predator.

Both Quincy Crew and Evil Geniuses evolved between their first series and the upper bracket finals. The short two-game set featured exclusively heroes that push the pace of play on both sides and in this case it was Quincy Crew who looked more comfortable. Opting for popular meta heroes like Gyrocopter, Death Prophet and Kunkka, the Quincy Crew punished Arteezy’s Alchemist in game one and Bloodseeker in game two. Quincy Crew finished both contests in under 30 minutes utilizing superior team fight and sustain to plow through EG’s defenses.

In lower bracket action, Thunder Predator fought their way through CR4ZY to reach the top three with a series win 2-1. The South Americans showed good resilience after getting trounced in game one of the series. The Thunder Predator support duo of Matthew and Mjz both put in stellar performances in games two and three to propel the team to mid game dominance. Leaning heavily on a carry Riki in both games, MNZ delivered with 32 kills and only two deaths combined. For CR4ZY it was a disappointing finish for a team that ended the group stage with the second seed.

It's a bloodbath by @EvilGeniuses as they take Game 3 over Quincy Crew! Game 4 starts soon, can EG close out the series?

Thunder Predator faced off with Evil Geniuses in the lower bracket finals where they faced more new looks from EG. Behind a carry Doom, Evil Geniuses took game one despite a very on-meta draft from Thunder Predator. Game two was a rollercoaster for fans of both teams. Featuring multiple team wipes and a Divine Rapier, it was a game decided by buybacks in the favor of Thunder Predator. In game three, Evil Geniuses went back to the Arteezy Naga Siren, thumbing their nose at the meta. Thanks to incredibly strong lanes and a standout performance from standin Bulba on the Nature’s Prophet, EG advanced to the grand finals rematch against Quincy Crew.

Unlike the South East Asian finals, this story would have a different ending than the winner’s bracket finals. In game one, Quincy Crew took advantage of some overly creative drafting from Evil Geniuses and crushed Arteezy’s Clinkz from start to finish. After the loss, Evil Geniuses doubled down on the fight-first meta and executed it to perfection in three straight stomps. EG has rarely been a team known for their fast pace, favoring a more controlled style of play. Quincy Crew looked like the slow team in games two, three and four however, failing to ever mount much resistance after the lanes broke down.

It's a bloodbath by @EvilGeniuses as they take Game 3 over Quincy Crew! Game 4 starts soon, can EG close out the series?

For Evil Geniuses, it was their second straight 3-1 tournament win with standins over Quincy Crew after beating them in the ESL One Online league earlier this month. As you may have noticed from the description of these matches, the meta has shifted drastically to favor extreme aggression and snowballing games. Though there will likely be a large balance patch coming, in the meantime, expect one sided matches that seem dominated from the draft til destruction of the Ancient.