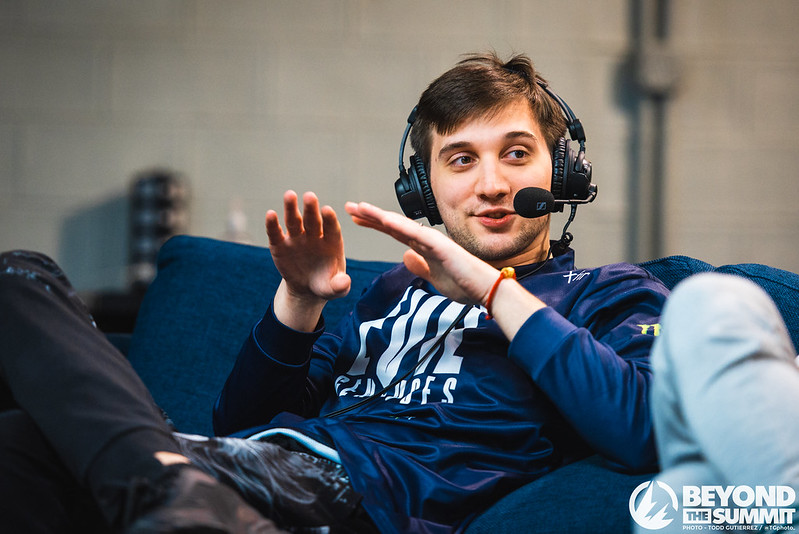 Evil Geniuses have one more shot to make it to the Summit 12 Grand Finals. (Photo courtesy Beyond the Summit)

The remaining four teams took to the battlefield on an extended day one of bracket play for the LOOT.BET Dota Summit 12. Scheduled with the now canceled ESL LA Major in mind, the remaining teams played all but the lower bracket finals and grand finals of the tournament. With the news of the Major being canceled, the Summit 12 has taken on a new level of importance for OG.Seed, Evil Geniuses, Fnatic and Team Liquid.

Evil Geniuses are notorious for their slow build during tournaments and the LOOT.BET Dota Summit 12 has been much of the same story. The team has been gathering momentum and showed their experience against the much less seasoned OG.Seed squad. Evil Geniuses out maneuvered OG.Seed in the drafting phase, employing some less popular picks and shifting around their tactics to suit a team that has shown a few very specific strategies.

OG.Seed have nothing to be ashamed of from this loss, they continue to show development and put up a good fight against a team everyone expected to finish in the top two. OG.Seed’s drafting has become somewhat predictable over the course of the event and this is something a team of EG’s caliber will exploit. Seed has proven the ability to switch up the tempo however and they could still make a run through the lower bracket.

Fnatic have looked like the best team for much of the event and they certainly showed that here against Team Liquid. Iceiceice and Jabz, in particular, stood out in this series with many incredible plays and outstanding control of the tempo of the game. They continue to rely on comfort picks but when you have such amazing hero/player combos as 23savage Morphling, iceiceice Pangolier and DJ Earthshaker it’s up to the other teams to prove they can beat them.

Team Liquid have improved dramatically as the event has unfolded but they still looked outmatched against Fnatic’s clean execution. The team is definitely still experimenting a bit and having fun with picks like position five Pangolier. Liquid have really stood out at this event for their consistent presence on the casting couch between games offering incredibly high levels of insight and transparency into their drafting ideas and playstyle.

The upper bracket finals showcased the volatility of patch 7.24b and the importance of controlling the tempo. Evil Geniuses banned out a lot of Fnatic’s comfort picks in game one and took the fight to them early on. EG held the advantage from the first minutes of the game and never let up the pressure on the way to a 24 minute victory. Not to be outdone, Fnatic responded in kind during game two. Behind an exceptional support performance by Jabz and DJ, the SEA squad rolled to a 23 minute victory where the supporting duo participated in nearly all of their 21 kills.

In the deciding game three, it was more of the same from Fnatic. Returning to comfort picks like DJ Earthshaker and iceiceice Pangolier, Fnatic took the lead early and control the pace for all 34 minutes. Though EG’s draft featured strong team fight combinations, they were never able to put the pieces together and dropped to the lower bracket while Fnatic advanced to the grand finals.

For such an unproven team, OG.Seed handled their round one elimination match like experienced veterans. Relying on comfort picks like the Chessie Void Spirit and Madara Spectre, Seed out laned, out rotated and out played Team Liquid in game one. Even a Divine Rapier on miCKe’s Medusa couldn’t turn the tides.

Game two was a much closer affair with both teams displaying multiple angles to their strategy. A strong early game from OG.Seed was countered by the overwhelming team fight combination of Disruptor and Naga Siren to give Liquid control in the mid game. OG.Seed were not done however, buying a crucial Blink Dagger on Underlord to counter the Team Liquid combo. With so much riding on the combo, Liquid began to falter as OG.Seed baited out spells and slowly turned the momentum back in their favor.

In the deciding moments of the game, it was big plays from ZFreek’s Rubick that completely countered the Team Liquid combo and closed out the game. OG.Seed move on to rematch against Evil Geniuses for a chance at the Summit Grand Finals while Team Liquid are eliminated in fourth place.