Flyers Steal Death Boxes in Apex Legends Ahead of Season 2 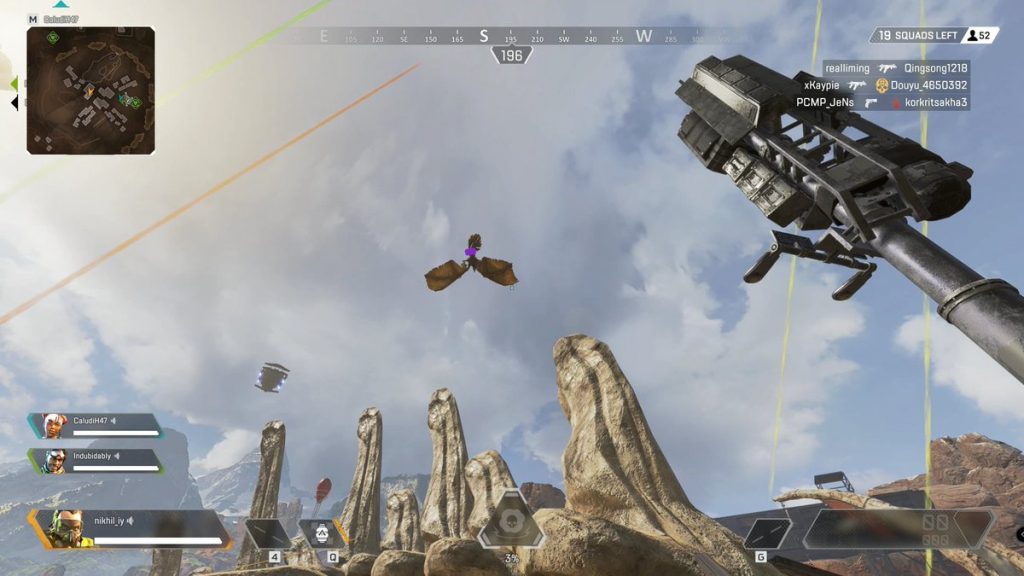 Dragon-like Flyers have popped up all over the Apex Legends' arena. (Image via Respawn Entertainment/EA Games/@ApexLeaksNews)

Apex Legends players have looked to the skies and dashed for cover this week. Why? Dragon-like creatures have suddenly appeared in game, swooping down to steal death boxes and generally causing havoc.

The creatures, known in-game as “Flyers,” first appeared late on Tuesday, creating a great deal of confusion as players discovered the new addition to the game. Flyers can be shot and killed, and are affected by abilities as normal. When they die, they drop any loot boxes they may have stolen, preventing guns, ammo, and armor from escaping your grasp.

Files for the Flyers were first revealed by data miners in March, along with a hinted “Beast Hunter” mode. Last week at E3’s EA Play event, the addition of other kinds of beastie were teased, but it’s safe to say no one thought anything would be added to the game before the start of the game’s second season.

The potential of a new game mode and the addition of NPC mobs can’t come soon enough for Apex. After it’s initial meteoric rise that saw the game reach an incredible 50 million players in the first week, the battle royale has been hemorrhaging its user base. Season 2, with its new additions, looks to end a content drought and bring lapsed players back to the fold.

Besides dragons and beast hunting, one way Season 2 hopes to attract players is with a significant rebalancing of its weapons. In a recent Reddit post the game’s principal weapons designer, Sean Slayback, outlined the changes set for next season. Along with buffs to the Kraber, Flatline, P2020, Alternator, and Triple Take, the post revealed the addition of the L-STAR, “a rare and powerful LMG” which looks to fill the gap in powerful, later game weapons. The L-STAR can gun down entire squads with impunity.

But if you’re eager to try the new gun, or even just enjoy the rebalanced weapons, you’ll have to wait. Season 2 doesn’t begin until July 2. In the meantime, it’s the perfect chance to check out how the very best at the game in the FACEIT Pro Series. Now in its third week, the tournament is played on live servers, with each team queuing in public matches to try and maximize their score.

After a disappointing second week for the inaugural winners Team Solo Mid, T1 took the lead at the top of the standings. But with the top five teams consistently scoring 400+ points across their 12 games, don’t be surprised to see the top spot change hands for a second time. What’s more, it remains to be seen whether the game’s new Flyers will have an effect on pro players, or if they’ll just provide a minor nuisance for those at game’s competitive peak.