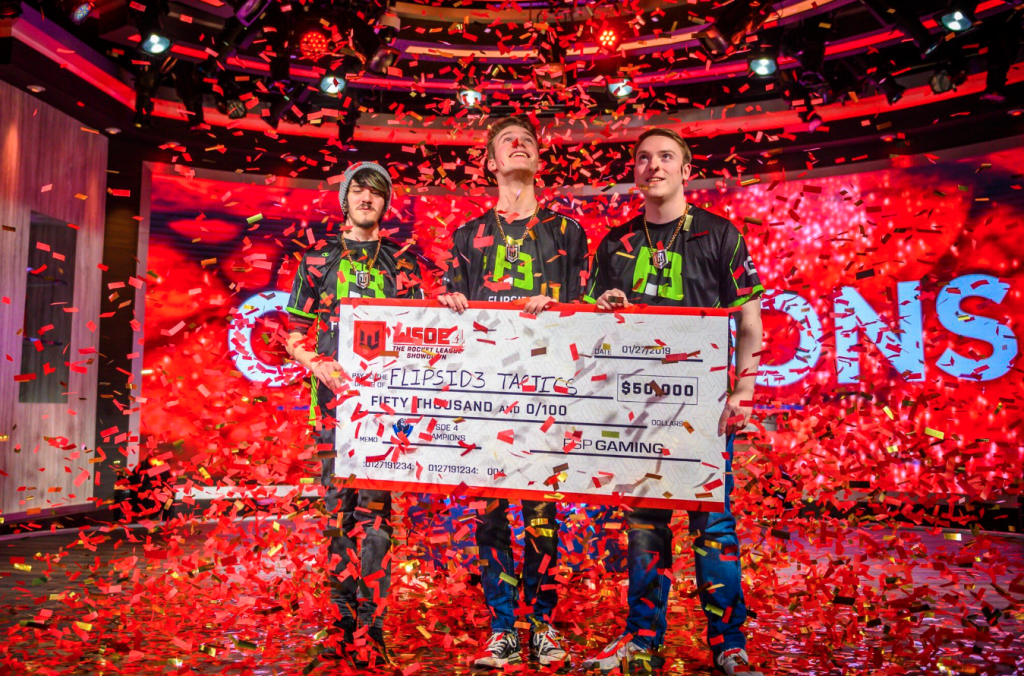 Rocket League fans around the community wrote off Flipsid3 Tactics and leaned towards the crowd favorite Cloud9 or Dignitas teams.

The favorites walking into WSOE 4 were the newly signed Team SoloMid squad, Cloud 9, and a fresh looking Dignitas with the addition of Maurice “Yukeo” Weihs.  The top three teams were knocked out of the tournament early on Championship Sunday, with the conclusion being a best of seven match between NRG and Flipsid3 Tactics.

Rocket League esport veterans are familiar with Europe’s Flipsid3 Tactics squad as they won RLCS Season 2 in 2016. They have been relatively quiet as of late, and they were looking to spark their name back up in Rocket League with a roster change. Before WSOE 4, it was announced that Flipsid3 traded Yukeo to Dignitas, and received Jack “Speed” Packwood-Clarke on loan from Red Reserve.

Flipsid3 Tactics wasn’t invited to the event as they qualified through WSOE’s open qualification. Regardless of placing first and dominating the open qualification team pool, the tournament was highlighted by Dignitas’ trade of Kaydop to Vitality while receiving ex-Flipsid3’s Yukeo. With Yukeo’s departure, this left Flipsid3 with a small window to find a player for WSOE 4. Flipsid3 decided to pick up a player from Red Reserve’s Rival Series quad, Speed.

Rocket League fans around the community wrote off Flipsid3 Tactics and leaned towards the crowd favorite Cloud9 or Dignitas teams. Most of those fans were left in disbelief at the end of WSOE 4.

The first day of WSOE 3 showed that Flipsid3 Tactics was looking to be back on top in Rocket League with impressive 3-0 sweeps over Oceania’s Chiefs and Dignitas. Flipsid3 did lose to Cloud9, however, but the European squad was determined to not lose their momentum.

Championship Sunday was full of upsets as Flipsid3 swept Cloud9 in a revenge finals to move on towards the Grand Final against NRG. Fans might be familiar with JSTN’s buzzer beater against Dignitas at the RLCS Season 5 World Championship. Unfortunately for NRG, Flipsid3 Tactics were determined to prove that they deserved to be called one of the best teams in Rocket League. Flipsid3 Tactics beat NRG 4-2 to become champions of WSOE 4 and claim the $50,000 grand prize, solid gold chain, and WSOE jacket.

WSOE’s recent events have had incredible production quality with in-game highlights, animated graphics, and a talented team full of Rocket League and esports personalities like Richard Lewis. Some viewers were not happy with how WSOE ran games on Saturday due to the fact that teams would have to break in order to let others finish on-stream. Fans and players were upset about the number of breaks that the production staff had to take as well. Hopefully, WSOE will figure out a production schedule that will work for viewers and those behind the scenes.