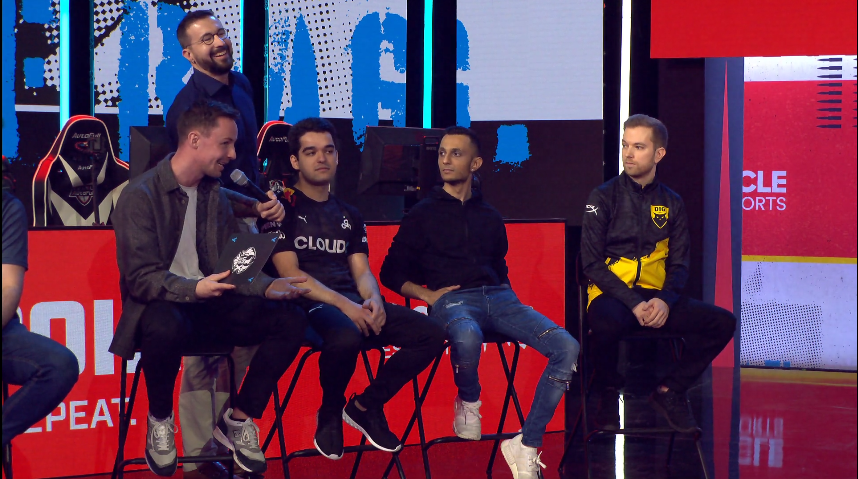 During the draft selection process, a player from each team would choose which opponent they wanted to join them in the group, accompanied by a tasteful bit of banter. Collectively, the group members would also each get to determine a name for themselves.

Group C, or ‘Group of Assisted Living’, as they deemed themselves, boasts a decent mixture of talent between Cloud9, Orgless, Dignitas, and FunPlus Phoenix. The latter of which entered CS:GO with the signing of the Heroic roster, although not confirming officially, despite appearing on Flashpoint’s debut.

North America seemed to take the brunt of all jokes during the draft, and Cloud9 was certainly no exception. Chosen by Pujan “FNS” Mehta of Orgless, Cloud9 would occupy a second round pick in the Group C.

Cloud9 has gone through several roster iterations in the last two years. The most recent of which has seen the organization sign the American and South African mix of ATK in January. Under the new configuration, Cloud9 has competed in two offline events, both yielding disappointing results. Though qualifying for IEM Katowice last month, Cloud9 was quickly done away with; Ninjas in Pyjamas, whose roster predominantly now represents Dignitas in Group C, had obliterated them in the lower bracket of the tournament.

Cloud9 will square off against FunPlus Phoenix in the opening match. The organization previously foreign to CS:GO had supposedly purchased the Heroic roster earlier this week, and while not releasing an official announcement, it was all but confirmed during Flashpoint’s draft.

Shot in the Dark

The mix of American and Canadian players better known as Orgless had earned a slot in Flashpoint 1 via the league’s online qualifiers. The team itself is about as much of a motley crew as it gets. Composed of former eUnited, Ghost Gaming, and Complexity players led by Pujan “FNS” Mehta, the group will certainly be looking to do some damage at the event in hopes of being picked up by a team.

Forming as recently as February 1, there’s not much to go off in terms of what Orgless will be able to manage result-wise. Earlier this week, Orgless fell just short of a slot in ESL One Rio’s Americas Minor, bowing out at the hands of Gen.G and Triumph. Though, the squad did clinch a win over Chaos in the Flashpoint online qualifier to get them to Los Angeles.

On paper, Orgless isn’t a terrible team by any means, but this group may be a little too much for them to handle. The North American mixture will face off against Dignitas in their opening round.

We’re not sure which is more confusing: our feelings about Flashpoint thus far, or FunPlus Phoenix’s communications team after failing to announce its CS:GO team prior to debuting on stream.

Jokes aside, the Chinese organization fielding Heroic’s all-Danish roster made its first “appearance” on the draft show. The broadcast was headed up by none other than Casper “cadiaN” Møller, the former North in-game leader, who stayed true to the franchised league’s promise of providing entertainment.

Towards the end of last year, Heroic had made a good case for themselves as the dark horse of Counter-Strike. The Danes managed a title placement at DreamHack Open Atlanta 2019 and secured a top four finish at EPICENTER 2019. While still orbiting around the #15 HLTV.org ranking, the lineup hasn’t exactly found the same success in 2020. Just before making the transition to FunPlus Phoenix, Heroic narrowly fell short of a slot in the Europe Minor for ESL One Rio.

While a rocky start to the season has put this core in doubt, we don’t think they should be counted out just yet. With a little time to sort things out, FunPlus Phoenix will likely get back to fragging as they were a few months back.

Dignitas, or Ninjas in Pyjamas 2.0, was ushered into Group C last, and perhaps rightfully so. The team contains almost the entirety of the legendary NiP roster which dominated Counter-Strike half a decade ago; although, we’re not sure how long we’ll be able to continue saying that as they’ve achieved comparatively little since.

Nonetheless, you’ve got some seasoned, strategic players on Dignitas. Perhaps even in their favor was the late replacement of Håkon “hallzerk” Fjærli for Ladislav “GuardiaN” Kovács as a stand-in from Na’Vi. The bonafide FaZe Clan star will surely bring an edge with Dignitas to their gameplay this weekend.

Flashpoint 1 will be the team’s first LAN outing under the new black and yellow colorway, having taken a bit of an extended break since being purchased from NiP. Online, Dignitas had reached the closed qualifier of the Rio Major and just barely secured a slot in the Europe Minor by placing 5-8th.

The (mostly) Swedish quintet will play Ogress in a best-of-three for their LAN debut. The match should be an easy one for the Swedes, but nothing can ever be said for certain.

Possibly sporting our favorite name in Flashpoint thus far, the Group of Assisted Living may not sound like a stunner, but we’re sure it’ll deliver on some exciting CS. Following this, the twelve teams will partake in Phase 2 of Flashpoint, which will mirror a similar three double-elimination group stage before transitioning into the playoffs.