Flashpoint Group B to Feature Snakes on a Train 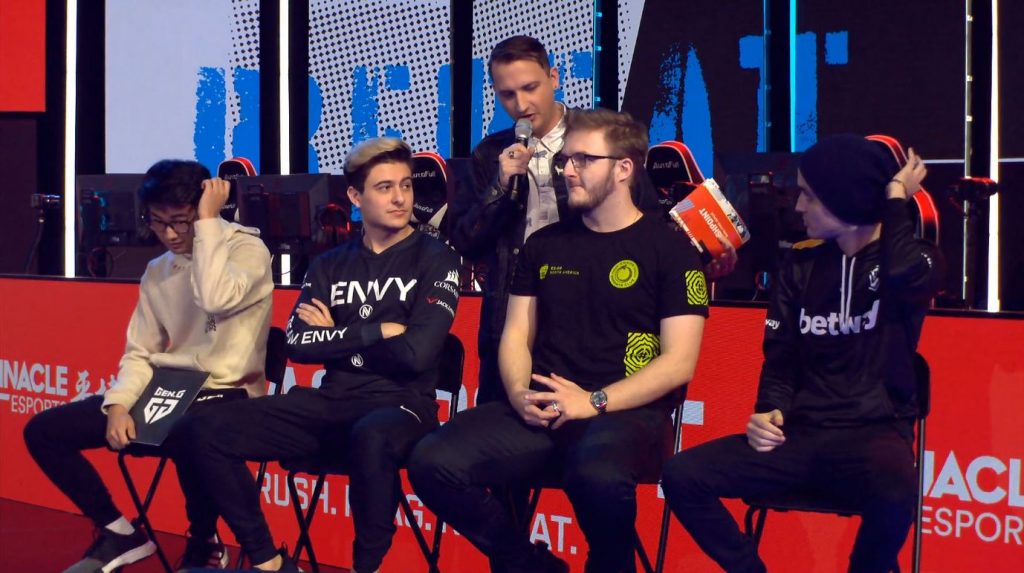 Flashpoint's Group B is tilted in the American's favor. (Photo courtesy Flashpoint)

The top three seeded teams – MAD Lions, FunPlus Phoenix, and Gen.G – took to the stage to select their group stage opponents one-by-one in a format new to CS:GO. Flashpoint 1 will see two phases, each comprising three double-elimination group stages leading into the playoffs set to commence on April 9.

Per Flashpoint’s new gimmick, each pool of players was given the opportunity to name their own group at the event. As for Group B, the collective opted for ‘Snakes and Rattlers’ – likely a dig at the questionable behavior of Noah “Nifty” Francis which led to Envy’s poor management of Jacob “FugLy” Medina and eventual release.

Group B came out to consist of:

Of the quartet, Gen.G, a founding member of Flashpoint, is likely the favorite amongst the second group.

The Korean organization announced its arrival in CS:GO in December 2019, signing the Cloud9 core trio of Timothy “autimatic” Ta, Kenneth “koosta” Suen, and Damian “daps” Steele. Shortly after, Gen.G would round out its roster with Sam “s0m” Oh and TYLOO’s finest, Hansel “BnTeT” Ferdinand. A configuration which would prove fruitful for the fresh mixture as they took to their first LAN event at DreamHack Open Anaheim 2020 and won without dropping a single match.

Additionally coming off a stellar performance earning them a slot in the ESL Rio Americas Minor, Gen.G is arriving at the FACEIT studios for Flashpoint in quite impressive form. Although, they may run into trouble against Chaos and MiBR given the stopping power and experience of both lineups. Regardless, we’re expecting Gen.G to put up a good fight in Group B.

It’s been awhile since Envy was headlining CS:GO articles. That is, of course not, counting those towards roster moves – as they’ve had quite a few in the last twelve months.

In early-February, the Dallas-based organization brought in a trio of international players – Kaleb “moose” Jayne, Michał “MICHU” Müller, and Buğra “Calyx” Arkın. Upon signing, Envy was able to break out into the North American Closed Qualifiers for the Rio Major, but fell shockingly to Yeah Gaming in a decisive 2-0 scoreline.

It’s really no secret that Envy is the shaky leg in this operation, and we’ll spare you the sugar coating. This is a team that has virtually zero LAN experience together (as far as we know) and minimal time spent in actual competition. Up against those pitted in the second group, we’d be genuinely surprised to see any worthwhile results come from them in Phase 1.

North American organization Chaos will be an interesting team to watch at Flashpoint. Having gone through their own share of rostermania, the group has perhaps decided to settle on the current starting five.

While boasting a nice slice of talent across the board, the team will likely be overshadowed by the BIG (pun certainly intended) personality of Owen “smooya” Butterfield, who joined the organization in January. The British AWPer had been in limbo after being released by Berlin International Gaming in 2019, but remaining relevant with powerful showings as a stand-in for Renegades.

Aside from securing the invitation to compete in Flashpoint 1 via the online qualifiers, Chaos hasn’t had a great start to the year. In fact, it’s been pretty awful. The team failed to qualify for both the Anaheim and Leipzig editions of DreamHack Open, and were recently eliminated from the NA Closed Qualifier, squandering their chances at competing in the Rio Major.

We’re forecasting a bottom-half-of-the-table finish for Chaos in Phase 1 of Flashpoint’s inaugural season. But hell, even if they prove us wrong, we’ll get some good CS out of it.

It’s been over a year since MiBR has fielded anything outside an all-Brazillian lineup. Though the December 2019 signing of Ignacio “meyern” Meyer has changed that, and with it, the seemingly molecular structure of the team’s DNA.

The Brazillian crew doesn’t like to mess with the sauce, unless they absolutely have to. After winning a pair of Majors together as SK Gaming and Luminosity, why risk shaking things up? While appreciable, it’s been a long time since MiBR has won a Major, let alone achieved a run of similar success to that 2016 & 2017.

We’ll be honest, there’s really nothing in terms of recent results that tell us MiBR is going to make a deep run at Flashpoint, but we can’t exactly knock the old guards either. Between this team’s experience, chemistry, and sporadic flares of genius, it’d be wrong to put a stake in the coffin before things even got started.

The Brazillians will clash against Chaos in the second round of Group B.

While ‘Snakes and Ratters’ isn’t the most intimidating name, this group may very well be the sturdiest of the three. If Flashpoint’s mission is to make Counter-Strike “entertaining”, and if the draft selection was any indication of what’s to come, Group B is definitely going to be worth watching. Group B matches begin Saturday, March 14th at 10 a.m. PDT with Gen.G v. Envy.