First Strike Crowns Heretics As Champions of Europe, But Not Icebox 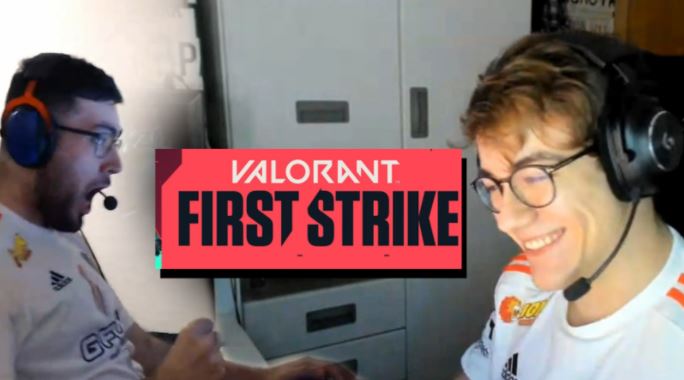 VALORANT’s First Strike: Europe drew to a close Sunday with a showdown between two unexpected Grand Finalists, Team Heretics and the unsigned SUMN FC. Both took down a world class team and a heavy favorite in the semifinals, leading to a brilliantly contested finale where Heretics were crowned the new champions of the thriving region.

First Strike: Europe will also be remembered for possibly marking the end of the undisputed reign of G2 and FPX as well as highlighting the fragility of Team Liquid. Both SUMN FC and Team Heretics had quite the run and the intense Grand Finals of Riot Games’ $100,000 event was watched by a modest 30,000 people on Twitch.

Road to the Finals: Heretics silenced ScreaM and end G2

Team Heretics opened their playoffs versus Team Liquid and while it did go to a third map, their opponent’s hopes of victory were placed almost exclusively in the hands of one player, Adil “ScreaM” Benrlitom. Team Heretics on the other hand looked like a well drilled and effective team. After taking a close 13-10 win on Split they did hit a roadblock on Ascent with Team Liquid’s Scream securing a thumping 30 kills for his team as Jett. ScreaM’s phenomenal solo performance in the series was unrivalled across the entire First Strike EU playoffs, and his 39% headshot ratio and 1.82 K/D highlighted just how big the gap was between him and his team-mates.

However, even ScreaM’s staggering 39 kills on Bind in game three could not stop Heretics who proved VALORANT  is at its core a team game. Team Liquid’s “one-man army”, as analyst Mitchman labelled them, ultimately fell 13-15, with Heretics’ captain Christian “IoWel” Antoran going on an unexpected rampage as an aggressive Sage in the closely fought final game.

Team Heretics’ next opponent in the semi-finals was a heavy favorite to win the entire event, G2 eSports. The narrow nature of the victory against Team Liquid in the quarters on top of the experience of behemoth G2 saw Heretics the underdogs heading in but they pulled off an upset victory.

The series started on Haven with G2 Esports taking a 9-3 lead but after the swap Heretics shifted gears to go 10-1 on Attack to take the opening game 13-10 and pull off a remarkable comeback. It was a grueling and back and forth match-up overall but Heretics showed great resilience to bounce back from the 13-5 defeat in game two on Bind, which included eight consecutive round losses straight out of the gate on Attack.

The second half on Split in game three was a fierce battle and the Raze players on both sides, Heretic’s Žygimantas “nukkye” Chmieliauskas and G2’s Oscar Cañellas “mixwell” Colocho, were the stars of the show. The game went down to the wire but it was nukkye who assured his team of a spot in the Grand Finals with a match winning ace to defeat the giants G2. “G2.. at a loss for words,” said commentator Pansy as their player cams showed their blatant disbelief.

Heretics’ Grand Final opponents were SUMN FC, an unsigned hungry group of fairly inexperienced players on the big stage who made a massive impact on the First Strike EU event. Their first match was far less competitive than Heretics, a rather routine 2-0 victory against Purple Cobras but it was their next match that garnered them a new fanbase.

FunPlus Phoenix (FPX) were alongside G2 Esports the favorites to win the First Strike EU event based on a track record of consistent top four finishes since assembling in August 2020.  In October FPX won the VALORANT Contenders Cup and finished 2nd in the BLAST Twitch Invitational after being just a whisker away from defeating G2 Esports in the Grand Finals.

SUMN FC on the other hand were the veritable underdogs but proved they had the potential to be top of the food chain with a remarkable performance against FPX in the First Strike EU semi-finals. The series started out with a bumpy 13-4 defeat on Split but Domagoj “Doma” Fancev ‘s explosive 1.77 K/D Raze on Haven in game two drew the series level. In the final game on Bind it would be James “Mistic” Orfila who would make headlines with his out of the meta Viper play. In the decisive game Mistic hammered the nails in FPX’s coffin going 21-9 with an incredible ADR of 179.3. While SUMN FC’s match against Purple Cobras was nowhere near as competitive as Heretics’ match with Liquid, the win over FPX made them more than worthy of a spot in the Grand Finals.

Heretics pushed to their limits in Grand Finals

With both Heretics and SUMN FC defying expectations it was the Grand Finals few VALORANT fans would have expected but it turned out to be a brilliant showcase for the potential of the region moving forward. “SUMN FC are not that scary, G2 were scary,” said Heretics’ nukkye in the lead up to the Grand Finals while his team-mate Dustyn “niesoW” Durnas said regardless of the outcome in the final match they had “already won” confidence wise after the victory over G2.

The final round of the First Strike: Europe event opened on Heretics map choice of Ascent and they absolutely dominated. In-game leader Lowel post-match that the team felt they were firing on all cylinders and it was clear to see as SUMN FC suffered a devastating 13-1 landslide defeat.

The second game was highly anticipated as it was to take place on Icebox, a map Heretics perma banned throughout the event. On top of the prospect of a high level game on VALORANT’s newest map, the Viper pick from both sides also caused a stir but ultimately they were far from as game changing as Mistic’s performance on the hero against FPX in the semi-finals.

While Heretics had been clinical on Split they looked befuddled and confused on Icebox. “We played Icebox just once in three weeks. I started the round and was asking my team-mates ‘where am I going’,” said Heretics’ captain IoWel jokingly post-match. “I said it doesn’t matter guys, we didn’t practice the map we just need to focus on our attitude.”

SUMN FC took game two 13-7 and the series moved into the middle ground maps. Game three was on Haven and SUMN FC just let the game get away from them, unable to turn the tide once they were on Attack. It was Heretics’ nieSoW’s best game of the Grand Finals making a massive contribution on Sova with a 20-8-10 KDA. With nukkye and loWel as usual on top form, Heretics’ looked in control heading into game four.

The final game of the Grand Finals turned out the best of the bunch as SUMN FC held their own against Heretic, clawing their back from 4-10 down to draw level at 11-11. In the dying rounds SUMN FC had done a brilliant job of breaking Heretics’ economy, and their Viper wall on A had persuaded Heretics to push onto B round after round.  With tensions high Heretics called for a tactical pause before resuming to calmly take the next round.

With SUMN FC’s future in the Grand Finals now in the balance, the following five minute technical pause for latency issues by Heretics with the score 12-11 in their favour lasted an age, ramping up the mental challenge the young faces of SUMN FC were facing. Unfortunately for them play resumed and Heretics secured a hard fought victory and the title of First Strike: Europe champions.

SUMN FC were incredibly close to forcing a fifth game and will leave the event with their heads held high, and the unsigned roster are likely to snatched up quick. Post-victory Heretics’ captain loWel agreed with host Yinsu Collins that they are now the strongest team in Europe. He also picked up the Hyper X MVP award, receiving 75% of the public votes and five of the six talents’.

“Coming into this I had heard from many of the top players and teams that in practice Heretics were nuts,” said VALORANT host James “Banks” Banks to Hotspawn. “I got to cover the qualifying event and we saw that they looked good out of practice but it wasn’t against any of the top top teams in Europe.”