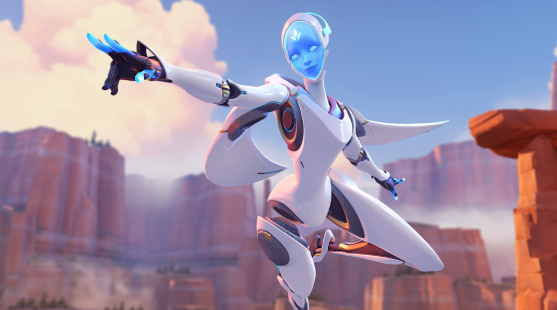 Echo has been on the PTR for barely 24 hours and we've got a first look at her capabilities. (Photo courtesy Blizzard)

Overwatch’s newest hero Echo is playable right now on the Public Test Region (PTR) server. Like many passionate fans currently under self-isolation, I immediately logged onto the PTR limitless mode to try out the new hero.

You can learn something from every situation.

Echo is now testing on the PTR!

Echo is an aerial dive DPS hero with 200 health, high damage capabilities, a powerful flight ability, and the best ultimate in the game. Echo is still on the PTR, so her abilities are subject to change, but as of now Echo is possibly THE DPS hero in the game. So far I have seen nothing but positive responses, even if some players were a little wary of how powerful her ultimate ability is.

Here are my first impressions of her kit.

Echo has an incredibly good kit

Echo’s kit is elegant, with every ability carefully crafted to match with the rest of her abilities. Echo has two movement abilities and three damage abilities which combine to make her a highly versatile and difficult to contain hero. Unlike many of the heroes Overwatch has added over the past couple of years, Echo doesn’t come with stuns, crowd control abilities, or a magic immortality field gimmick. Instead, Echo is a straight forward, highly mobile, damage dealer. Due to the lack of stuns and crowd control, her kit feels fair even when dealing massive damage.

In our latest Developer Update, Game Director Kaplan discusses Overwatch's newest hero, Echo, giving us a glimpse at her back story and abilities.

Echo’s left shift ability allows her to boost forward and then fly about three seconds in any direction. The ability offers the player much more control than Pharah’s Jump Jet or Mercy’s Guardian Angel ability. Once in the air, Echo also has a passive Glide ability, which offers significant horizontal movement in the air. Using Echo’s movement abilities, players can attack the backline, escape enemy fire, or reign damage down from above. Honestly, with how strong Echo is, I don’t see a reason to play Pharah.

Echo’s Flight ability is the basis for her battlefield effectiveness. Echo is probably best classified as an aerial dive hero, because her flight ability and small hitbox allow her to hold unique and aggressive angles with relatively low risk to herself. The range of her flight makes it difficult for enemy heroes to contain her, since she can easily float away from almost any confrontation.

Echo’s primary ability launches a burst of three projectiles which deal 51 damage if Echo lands all three shots. This ability fires fairly quickly, with no damage falloff which results in significant damage at range, which means it combined perfectly with her aerial presence to batter then enemy team. Her secondary fire launches six sticky grenades which deal five damage on impact and blow up after a moment to deal 31 damage-per-grenade. These sticky grenades are highly flexible and useful at all ranges, as they won’t blow up until they hit a surface.

Her alternate ability, focus beam, launches a powerful short range beam, similar in use to Symmetra. The beam lasts several seconds and deals 50 damage-per-second (DPS). If a target is below half health, this beam deals an impressive 200 DPS. When Echo combos the sticky grenades with her focusing beam, she can quickly and efficiently kill almost any hero, including tanks like Roadhog or D.Va.

Echo’s Ultimate is one of the craziest things ever added into Overwatch and that is not an exaggeration.

Some of Echo’s abilities are overpowered

The vast majority of Echo’s kit feels extraordinarily powerful but it also feels fair. However, a few of Echo’s abilities are raising eyebrows for a lot of players. Her ultimate definitely needs to be tuned back.

Here you can see Daniel Fenner was able to use his ultimate and then gain it back in less than 20 seconds.

This probably means Echo’s ultimate ability generates too quickly, especially considering how powerful it is. I am not sure if this is an issue with how much damage she is doing or an issue with the generation rate itself. Teams should not have to deal with Echo’s ultimate more than once during a given team fight, that just feels oppressive.

Her overall damage also might be too much. It’s hard to say for sure, since she has been available to play for less than 24 hours, but it feels like her abilities and damage essentially replace the need for a Pharah. Echo is harder to hit, she moves faster while in flight, and has more diverse damage dealing abilities than Pharah. Something might change, but I think that her addition to the game might put Pharah’s pick rate in the grave.

New heroes are often extremely powerful on the PTR, only to receive significant nerfs throughout the testing period. I suspect they will nerf her ultimate generation, her damage, or both in the near future.

Try playing her in a dive composition

Echo combines really well with dive tanks. I found the most success with teams who were picking D.Va, Winston, and Hammond, since Echo can easily keep up with them while diving the enemy backline. With distractions like Hammond and D.Va disrupting heroes on the ground, it is almost all too easy to finish off the backline supports and just generally pump damage into the enemy team.

Wait until barriers are damaged to use your focus beam

Echo is very good against enemy barriers, since her focused beam deals 200 DPS when the barriers are at half health. If you can damage the barrier below half health and then use your beam attack, you can quickly dismantle the enemy defense. Use her high DPS against barriers to soften up Orisa and Reinhardt-centric compositions.

Use your flight ability as an escape

Echo is so fast that she can strike the enemy backline and then be back damaging the enemy frontline in a matter of moments. That said, I often found myself diving way too far and then having to wait six seconds to be able to use my Flight ability again. I died many times before learning my lesson. Managing your escape ability is going to be essential to your success as this new hero. Sometimes it’s best to use the flight to get a strong angle to rain damage down, other times it makes sense to aggressively attack the enemy and use the Flight ability to bail yourself out.

A duplicated Reinhardt can essentially get his ultimate ability with a single successful swing of his hammer. A duplicated Roadhog can also build his ultimate in basically one hit and can actually charge his ult by healing instead of doing damage in a pinch.

Use characters with stuns abilities to counter Echo

The biggest threat from an Echo is her ultimate. It’s important to have heroes on your team who can deal with ultimates through crowd control and stun abilities. If you are prepared for Echo to duplicate and immediately ult your team. Some good heroes to try against Echo include Brigitte, McCree, Mei, and Sombra. If you do play Sombra, avoid getting duplicated where possible, because Echo will likely launch at least one EMP. On the bright side, if Echo does use her ultimate to duplicate someone, you know that she is about to use that character’s ultimate. You have time to respond if you are ready and have the right team composition.