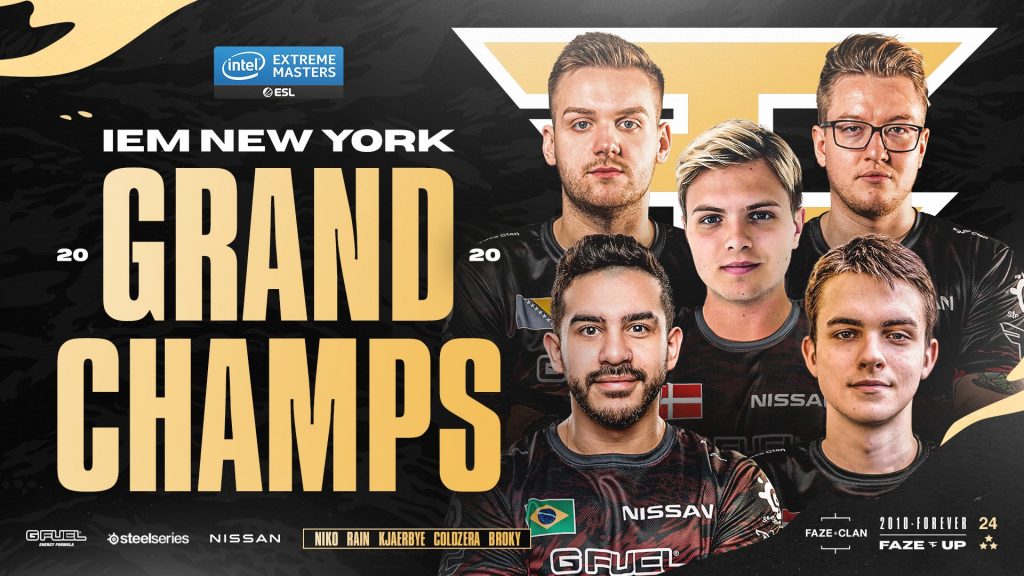 FaZe Clan have won their first tournament of 2020 in decisive fashion after sweeping OG in the finals. (Photo courtesy FaZe Clan)

IEM New York Online: Europe’s short playoff bracket has concluded. FaZe Clan have overcome the odds and taken the title after not dropping a single map in their playoff run. Their 3-0 victory over OG in the grand finals came after getting swept by them in the group stage.  FaZe came into IEM New York as the lowest rated team and had not even made the finals of any tournament this year until now.

Standing in the way of FaZe’s first finals appearance of 2020 was Team Vitality. Hopes were high for Vitality as they were favorites to win the title coming into playoffs. FaZe would dash those hopes quickly. Mirage was the first map courtesy of FaZe. Their T side start was effective, earning six rounds before Vitality could respond. They did find their share of rounds as the half went on, but FaZe still took an 8-7 lead.

Vitality won the second pistol round but were immediately stopped cold by a FaZe force buy. The momentum shift proved fatal for the French side as they lost seven of the next eight rounds. FaZe Clan easily cleaned up the map 16-10 to take map one.

Vitality’s Inferno was up next. The early rounds went back and forth as both squads fought for control. It was FaZe’s Nikola “NiKo” Kovac who found ways to put his team ahead.

FaZe won the final six rounds of their CT campaign, giving them a 10-5 advantage. Vitality’s defense went very similarly to FaZe’s in that one man did much of the heavy lifting. Mathieu “ZywOo” Herbaut tied NiKo’s 19 CT kills as the score difference closed. With the game tied at 14 apiece, everything came down to the final two rounds. It was FaZe who found two consecutive entry frags in Mid to secure the 16-14 victory and a spot in the grand finals.

The best-of-five finals started with another Mirage pick by FaZe. They struggled to get going on the T side and lost six of the first seven rounds. After that, FaZe found their rhythm and broke through OG’s defenses to bring the score to 7-8. The second half was competitive from the start. No team ever found a win streak of more than three rounds as the score stayed even. Overtime would be required to determine a winner.

Although OG kept getting close to breaking the game open, key clutches out of FaZe’s key players kept them in the running. In the end, it was a 4K from Markus “Kjaerbye” Kjaerbye that secured the 22-20 victory.

The unfortunate loss looked to have affected the OG side going into their Inferno pick. They were only able to find three rounds on the T side. Meanwhile, every FaZe player flourished. Their HLTV ratings ranged from 1.17 to 1.77 as massive damage was dealt to their opposition. A 12-3 half quickly turned into a 16-5 win for FaZe, putting them on championship point.

The last stop for the series was Dust2. OG actually kept it fairly close in the first half. They started out 3-0 off of the pistol round, then lost five straight as the FaZe cavalry arrived. Even so, OG was able to fight their way to an 8-7 lead off of Mateusz “mantuu” Wilczewski and Valdemar “valde” Bjorn Vangsa’s combined 30 kills and 198.9 ADR.

Their defensive efforts would be trumped by the true star of the show. NiKo earned a 17-5 K-D ratio, 130.8 ADR, and a 2.12 HLTV rating on his CT side. With a player this imposing on their side, FaZe was able to win eight of the first nine rounds in the half. The final round of the match fittingly saw NiKo nail an AWP 4K on the A site retake to solidify the 16-11 result and the 3-0 sweep.

FaZe Clan were one of, if not the unlikeliest team to win IEM New York. They hadn’t won a tournament yet in 2020, let alone made a grand final. On top of being the lowest ranked team at the event, recent talks of NiKo moving to G2 Esports likely threw the team into some disarray. Even so, FaZe proved that they have what it takes to be big players in the current CS:GO scene. Inconsistency has been a problem for them for a long time. FaZe’s next chance to prove that they are here to stay will be at DreamHack Open Fall beginning on October 14th.