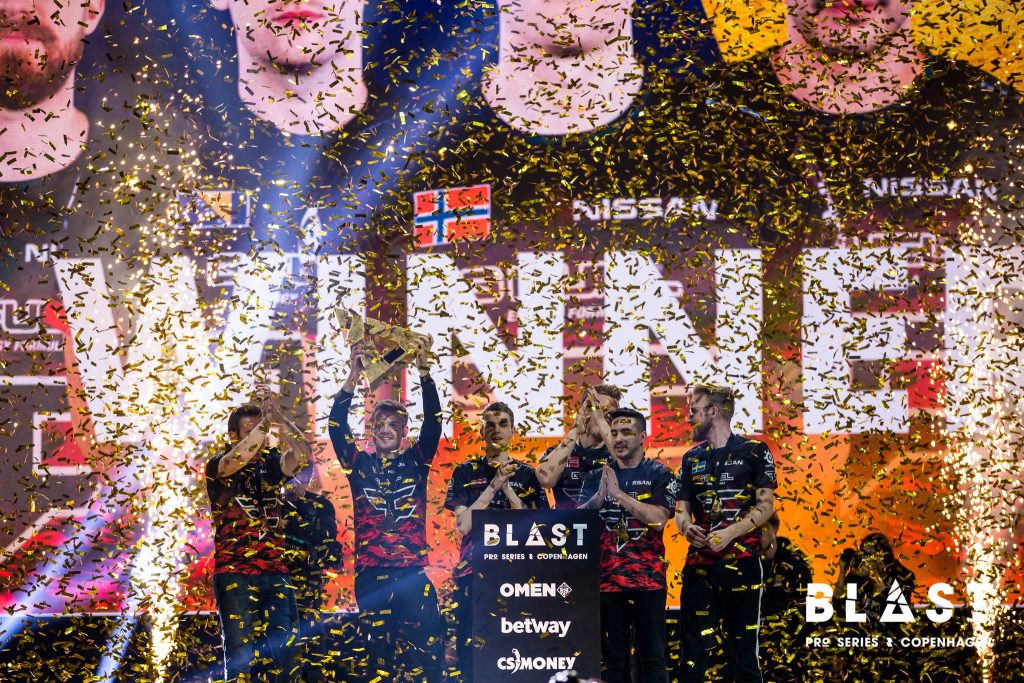 FaZe Clan are looking much stronger after a win at BLAST Pro: Copenhagen. (Image via BLAST Pro)

FaZe Clan’s CS:GO roster surprised the world as they emerged victorious at the BLAST Pro Series: Copenhagen. For a long time now, FaZe Clan has not looked like 2017/ early 2018 version of themselves. After back-to-back tournaments, FaZe went from a top-four contender to a team where we weren’t sure if they could even get that far. Several roster moves later, FaZe Clan didn’t look like they could retrieve their former elite status… until now. During the BLAST Pro Series: Copenhagen, FaZe Clan only lost one map against Team Liquid. Furthermore, every member of their squad was more than capable of carrying the map for their team. There are lots to dig into here, so let’s look at how they did it.

Expectations for this tournament were set to a very curious look ahead. For a few teams, it was about a stellar performance, while for others it was about whether they could still dominate. FaZe Clan fell into the latter category, especially with their recent roster changes with Helvijs “broky” Saukants and Marcelo “coldzera” David. Coldzera is one of the best CSGO players in recent years; although, he fell off in MIBR, with lackluster performances throughout 2019. As for broky, the up-and-comer is in an interesting position with a team looking directionless.

The first few demonstrations of this roster were extremely disappointing. Their performance at ESL One New York and over the ECS weekly weeks had them losing to unexpected teams and exiting tournaments early. Heading into the tournament, their expectations weren’t great.

Although, FaZe seems to have learned from the mistakes since coming together as a new five-man roster. This tournament had them beat out everyone, except for Team Liquid. What helped highlight their success was the opening victory against Astralis, who they beat 16-2 on Inferno, a map that Astralis is more than comfortable on.

In each map, a new player on their team rose to the occasion. One player to note was Olof “olofmeister” Kajbjer, who found himself topping his team’s leader boards, after having some unforgettable poor performances in recent months. Also, broky found himself leading the charge in their match vs Cloud 9. Cloud 9 had a close series vs FaZe Clan, and the rookie on the roster rose to the occasion with 31 frags. Broky has the highest kill count for any player on his team in the entire tournament, with olof on 30. But most importantly, coldezera seems to have found his place. He never looked like a weak link on the team. The roster seems to have come together after a long month of fixing issues, with it blossoming against top teams at the right time.

In the wider context of the top level of CS:GO, where does FaZe Clan fit? As it stands it is hard to tell. Top teams like Astralis and Team Liquid look inconsistent, with Team Liquid even skipping tournaments. Natus Vincere is also in a similar position, as they look to rebuild their roster after roster changes. In comparison to these teams, if this is the caliber to expect from the FaZe Clan roster, then they will be a good watch as they come up against other teams on the come up.

The other teams on the comeback at the moments is Evil Geniuses, Fnatic and NiP. Evil Geniuses had won two tournaments in the last month after a roster shuffle several months ago. Moreover, Sweden is on the rise, with Fnatic winning Malmö while having a strong final against EG at StarSeries.FaZe still has to play these two teams while on form to determine where exactly fit, not to mention that Team Vitality is also in a strong spot, despite a few flaws. If FaZe Clan can repeat their BLAST Pro Cophenhagen level of performance at IEM Beijing next week, against the aforementioned teams, FaZe Clan may be back as a top-four contender after a nearly two-year hiatus.