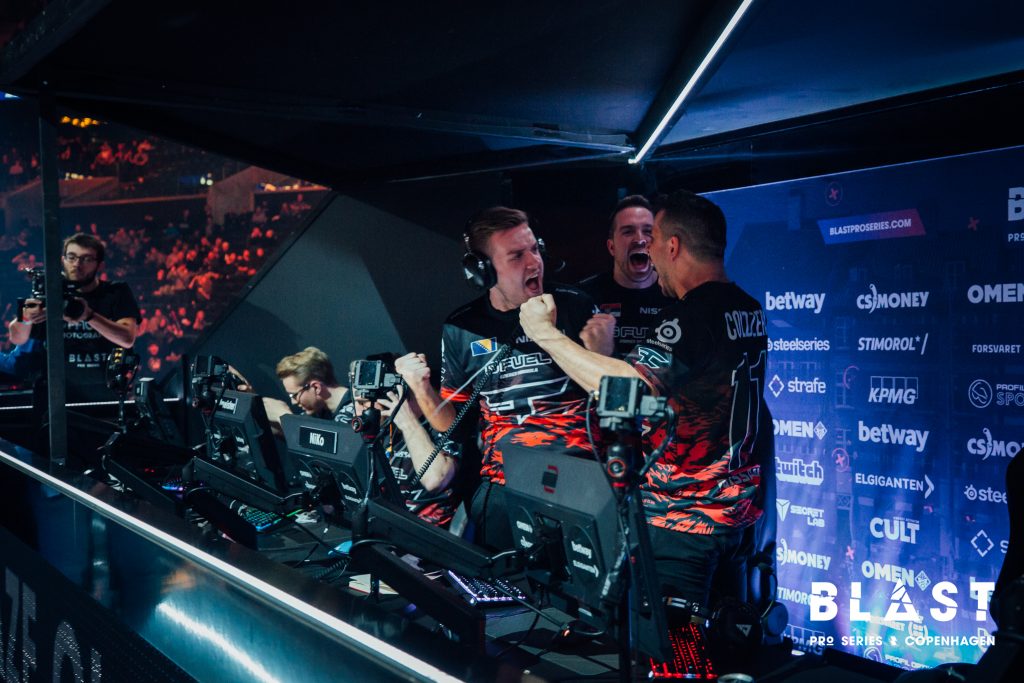 FaZe Clan have emerged victorious after a successful showing in Blast Premier Springs’ Group A. Their victory came without cost. The roster pulled off a great undefeated run throughout the group, even rappelling Team Liquid twice in best-of-three scenarios.  For most pundits out there, this was Team Liquid’s group to win. Although, as we stated in our preview, FaZe Clan and BLAST have a history of success.

It all started when FaZe Clan and NiP kicked off the inaugural match of the BLAST Premier Spring Season. The series ran on Overpass and Mirage, and both maps went heavily in favor of FaZe. Overpass was a 16-7 scoreline, with Mirage a 16-8.

Moving on, FaZe Clan faced off against Team Liquid in the upper bracket final. They too were met with FaZe Clan’s new found power. Whilst the first map of Dust II was quite the back and forth battle, FaZe did win it out in the end 16-12. Although, it was a different picture on Inferno, FaZe had an incredible showing, taking down liquid 16-5. Furthermore, it only gets spicier from then on.

Team Liquid took down NiP in the loser’s bracket final to advance to the Grand Final against FaZe. Team Liquid looked like they found their confidence after a solid first map. NiP did make Liquid compete in overtime on Mirage as the result was 19-17 for Liquid. However, this result got their blood pumping.

The casters certainly thought so too, as the history of Liquid as a dominant team and the series versus NiP had them already for the series.

Apparently the warm-up versus NiP translated into the opening rounds of the group Grand Finals. Team Liquid opened up Mirage strong, with back to back round wins. However, FaZe soon found their footing, and that’s when it all came tumbling down for the North American side. FaZe gained control with strong outplays and tactics, which was the series turning point. FaZE then claimed victory on Mirage 16-9.

The final map was on Dust II, a repeat of their semi-final. Whilst that map was a close battle, this was the polar opposite. From 16-12 to 16-2 FaZe Clan destroyed Team Liquid in a manner that only Astralis see fit. Team Liquid was simply blown away, and it’s easy to see why.

FaZe’s Nikola “NiKo” Kovač said during the final interview of the broadcast they have finally found a way to play. With the roster knowing exactly what they are doing after the holiday season, 2020 already seems like it’s FaZe’s overdue revival.

GROUP 1 CHAMPIONS WITHOUT LOSING A MAP 💪

"We have finally found a way we want to play, and we are going to our best to remain at the same level" – @fazeniko #BLASTPremier pic.twitter.com/K67iOk0aGk

Team Liquid continues to look like that wish-wash team since the StarLadder Berlin Major. More practice is needed for this roster, and there’s lots of room to flourish given it’s only February.

Meanwhile, the revamped NiP roster has lost some of its star power, due to recent roster moves. The Swedes came into the event with the freshest roster of all four teams. They had signs of life though against Team Liquid, and they saw some success vs MiBR. They will need time to develop though, so don’t expect them to look great for a while.

Sadly, MiBR is in a tricky spot. Like most teams, they too changed their roster. Gabriel “FalleN” Toledo’s new vision was an opportunity for MiBR to reinvent themselves. Although, it failed to come into fruition here. Their only success was map one vs NiP, and they failed everywhere else. For a team looking to position themselves, it looks like 2020 as it stand will continue to have MiBR has a team in decline.